The title of this piece came from Greg Mayer, who was about to write a post on this same subject when he saw my draft. So, with permission, I’ve stolen his title, which was better than mine. And I agree with it.

Bret Stephens knew what he was doing when he called out the 1619 Project in his latest column (click on screenshot below). For he not only criticized the project, but the paper’s—his paper’s—journalistic integrity, verging at times on mendacity.  In fact, it’s a good piece, even if you don’t like Stephens’s conservatism, for what I know about his indictment is true. But how much of a career will he have at the NYT now? For what he did was far more serious than the “crimes” that made Bari Weiss’s life at the paper so untenable that she left. She was just anti-woke, which went against the paper’s editorial grain.

When Greg saw this draft (he’s followed the Project since its inception, he added this:

You mention Bari Weiss, but don’t forget the opinion page editor, James Bennet, who was defenestrated from the Times for insufficient wokeness. One thing about Stephens that might protect him is the fact that he is very visible, as the Times‘s premier conservative columnist. Both Weiss (who only occasionally was published by the Times) and Bennet were mostly behind the scenes players; Stephens is out in front, published twice weekly (including his duets with Gail Collins), and a “Columnist”, not a mere contributor.

In his column, Stephens says the 1619 Project, however good its motivations, was handled so duplicitously that it gave the paper’s critics “a gift.”

Let me say first that since the 1619 Project was not just journalism, but also an attempt to infiltrate American secondary education with its ideology from Critical Race Theory, it represents a victory for the Woke. Although Ayaan Hirsi Ali says the Woke haven’t won, I disagree. They control not only the two most respected liberal papers in America, and most higher education, but are now putting their tentacles into secondary-school education. Even the Chicago school system has adopted the 1619 Project as part of its curriculum.

But I digress. I described some of the paper’s questionable practices in earlier posts, and Stephens reprises how Nikole Hannah-Jones, the project’s director, simply lied about the project’s overriding aims, saying that she never tried to change the foundation date of America from 1776 to 1619. But she did make that claim several times, and it quietly disappeared from the paper’s website without an explicit correction. And despite trenchant criticism by historians about many of the project’s empirical claims, the paper and editor refused to accept, or even consider, the criticisms.  The Woke don’t do stuff like that.

Stephens finds other problems, like the new claim that 1776 represented the year of “defining contradiction” of America, that the founding principles were “false,” and that Jake Silverstein, the NYT Magazine editor, grossly exaggerated when he said this:

“Out of slavery—and the anti-Black racism it required—grew nearly everything that has truly made America exceptional.”

Well, you can argue about the meaning of words like “contradiction,” “falsity”, and “nearly everything,” but the fact remains that noted historians on all sides of the political spectrum have argued that the Times‘s journalism simply distorted history. Stephens gives several examples of pushback by historians (e.g., here, here and here) and concludes, correctly, I think, that the 1619 Project is “a thesis in search of evidence, not the other way around.”

The historical distortions and track-covering by the Times are not in doubt, at least not among those who’ve followed the controversy, but of course all criticism of the 1619 Project by liberals comes with the obligatory praise for its anti-racist intent.  And indeed, the intent was admirable. Who of good will can oppose anti-racism? But the execution has been deeply flawed, and will the paper really reduce racism by inculcating a generation of American children with Critical Race Theory? Further, Trump has already suggested that he’ll cut off government funding to any schools who adopt the 1619 Project in their curriculum. I oppose that autocratic decision as well, as the President should not be dictating what’s taught to children. School boards set curricula.

In the end, Stephens knows he’s even more of an apostate with his NYT colleagues now, but you have to admire him for the courage of his convictions. He didn’t have to write this column, which includes criticisms of the paper’s journalistic practices like this:

Journalists are, most often, in the business of writing the first rough draft of history, not trying to have the last word on it. We are best when we try to tell truths with a lowercase t, following evidence in directions unseen, not the capital-T truth of a pre-established narrative in which inconvenient facts get discarded. And we’re supposed to report and comment on the political and cultural issues of the day, not become the issue itself.

As fresh concerns make clear, on these points — and for all of its virtues, buzz, spinoffs and a Pulitzer Prize — the 1619 Project has failed.

Nor did he have to end his piece this way, but I’m glad he did:

For obvious reasons, I’ve thought long and hard about the ethics of writing this essay. On the one hand, outside of exceptional circumstances, it’s bad practice to openly criticize the work of one’s colleagues. We bat for the same team and owe one another collegial respect.

On the other, the 1619 Project has become, partly by its design and partly because of avoidable mistakes, a focal point of the kind of intense national debate that columnists are supposed to cover, and that is being widely written about outside The Times. To avoid writing about it on account of the first scruple is to be derelict in our responsibility toward the second.

All the more so as journalists, in the United States and abroad, come under relentless political assault from critics who accuse us of being fake, biased, partisan and an arm of the radical left. Many of these attacks are baseless. Some of them are not. Through its overreach, the 1619 Project has given critics of The Times a gift.

In the meantime, the Wall Street Journal has reported on a futile effort: a letter to the Pulitzer Committee signed by historians (including Glenn Loury), asking them to take back the 1619 Project’s Pulitzer Prize (that Prize was ridiculous from the get-go, awarded not for quality but wokeness). You won’t be able to read the WSJ article, which is paywalled, but you can see the beginning by clicking on the screenshot below. (Judicious inquiry may yield you a copy of the piece.) 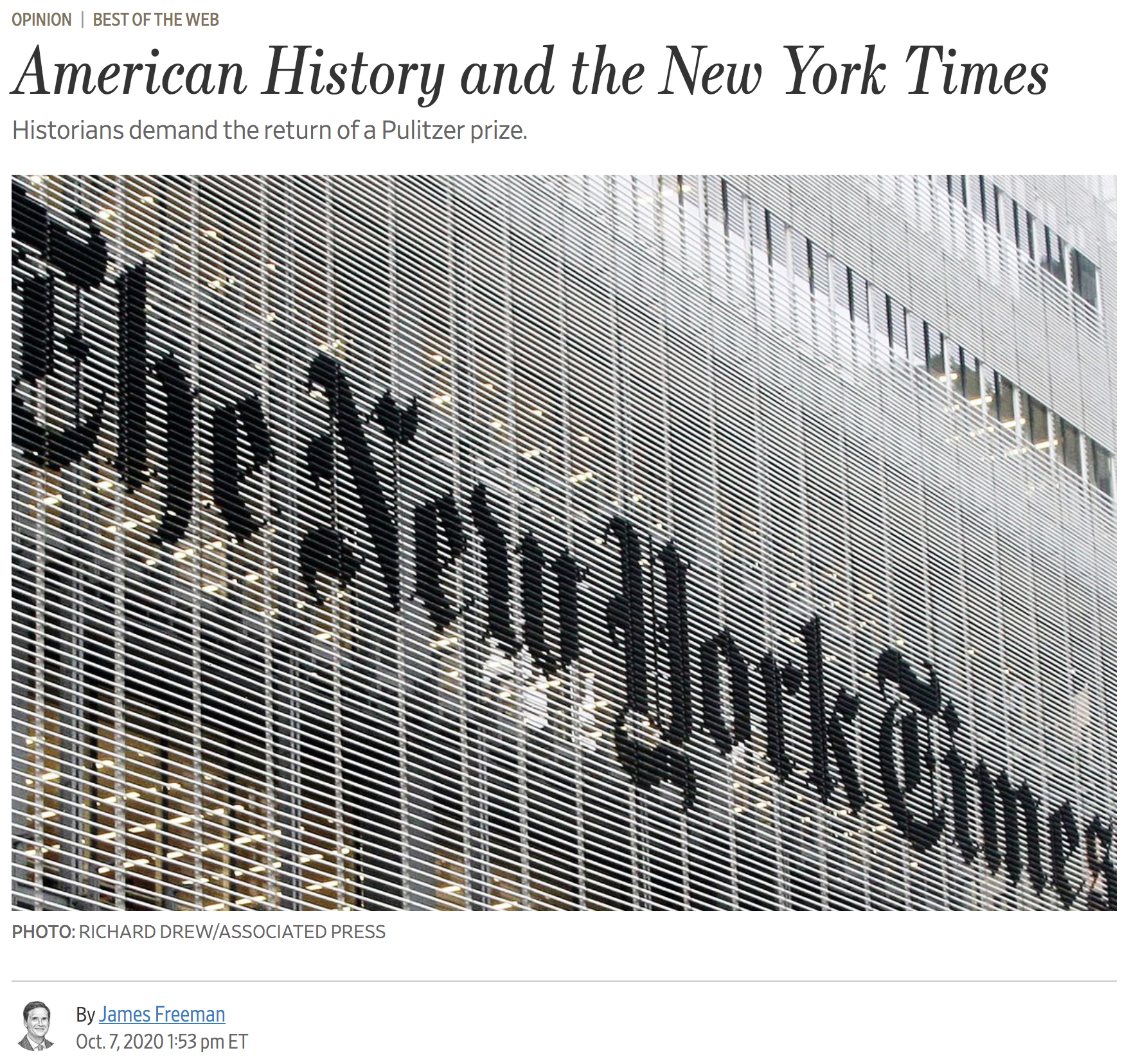 The WSJ repeats some of the earlier criticism, but also links to the Pulitzer letter, which you can read by clicking on the screenshot below:

Of course the Pulitzer folks won’t retract the prize; I don’t know if it’s ever done that, but it surely wouldn’t retract an award for an antiracist piece in these times.  Here’s a short extract from the longish letter which includes lots of material we’re familiar with by now:

The duplicity of attempting to alter the historical record in a manner intended to deceive the public is as serious an infraction against professional ethics as a journalist can commit. A “sweeping, deeply reported and personal essay,” as the Pulitzer Prize Board called it, does not have the license to sweep its own errors into obscurity or the remit to publish “deeply reported” falsehoods.

The Pulitzer Prize Board erred in awarding a prize to Hannah-Jones’s profoundly flawed essay, and through it to a Project that, despite its worthy intentions, is disfigured by unfounded conjectures and patently false assertions. To err is human. But now that it has come to light that these materials have been “corrected” without public disclosure and Hannah-Jones has falsely put forward claims that she never said or wrote what she plainly did, the offense is far more serious. It is time for the Pulitzer Prize Board to acknowledge its error rather than compound it. Given the glaring historical fallacy at the heart of its account, and the subsequent breaches of core journalistic ethics by both Hannah-Jones and the Times, “Our democracy’s founding ideals were false when they were written” does not deserve the honor conferred upon it. Nor does The 1619 Project of which it is a central part, and which the Board seeks to honor by honoring Hannah-Jones’s essay. The Board should acknowledge that its award was an error. It can and should correct that error by withdrawing the prize.

The letter is signed by 21 original signatories and 7 additional ones from “the Independent Institute.” I can’t be arsed to look most of the scholars up and, as most Woke people do, try to discredit them. I’d never heard of any of them save Glenn Loury, who, as I recall, identifies as a liberal. It doesn’t matter, though, as Pulitzer won’t revoke the Prize. But the original award to the 1619 Project is, I think, a travesty, motivated much more by ideology than by quality.

46 thoughts on “Bret Stephens is wrong about most things, but he is very brave”