Yesterday I criticized the University of Chicago’s English Department for repeatedly changing their “Faculty Statement of 2020” without ever telling readers that they’d done so. That’s not a huge misstep, though it’s unethical and should not have been done by—of all organizations—a Department of English.

But the New York Times has been far more unethical in a simiular way: changing what it said about the 1619 Project’s aims without letting the readers know.  It also does other dubious things, like employing fact-checkers whose fact-checks are ignored, as well as ignoring correct criticisms from historians on all sides of the political spectrum. And its dug in its heels when historians offer corrections that should have been made.

An example of historical sleaziness is the Project’s assertion that the Revolutionary War in America was fought because the colonists wanted to ensure the continuation of slavery in their new country. The evidence for this is virtually nonexistent, but Nikole Hannah-Jones, who won a Pulitzer Prize for the Project, hasn’t backed off much. As The Atlantic notes,

Hannah-Jones hasn’t budged from her conviction that slavery helped fuel the Revolution. “I do still back up that claim,” she told me last week—before Silverstein’s rebuttal was published—although she says she phrased it too strongly in her essay, in a way that might mislead readers into thinking that support for slavery was universal. “I think someone reading that would assume that this was the case: all 13 colonies and most people involved. And I accept that criticism, for sure.” She said that as the 1619 Project is expanded into a history curriculum and published in book form, the text will be changed to make sure claims are properly contextualized.

Well, maybe you can find a handful of revolutionaries motivated this way, but historians have claimed that, among all other motivations, keeping slavery as a going concern was trivial. She did make the change (or so I think; I haven’t checked.) Other historical are detailed in the article just below.

In a new article in Quillette (click on screenshot), Philip Magness (who has written a critical book on the 1619 Project) finds one critical assertion of the original 1619 Project that’s gone down the “memory hole” (you’ll remember that term from Orwell’s book Nineteen Eighty-Four, in which Winston Smith’s job was to make history disappear). Click to read: 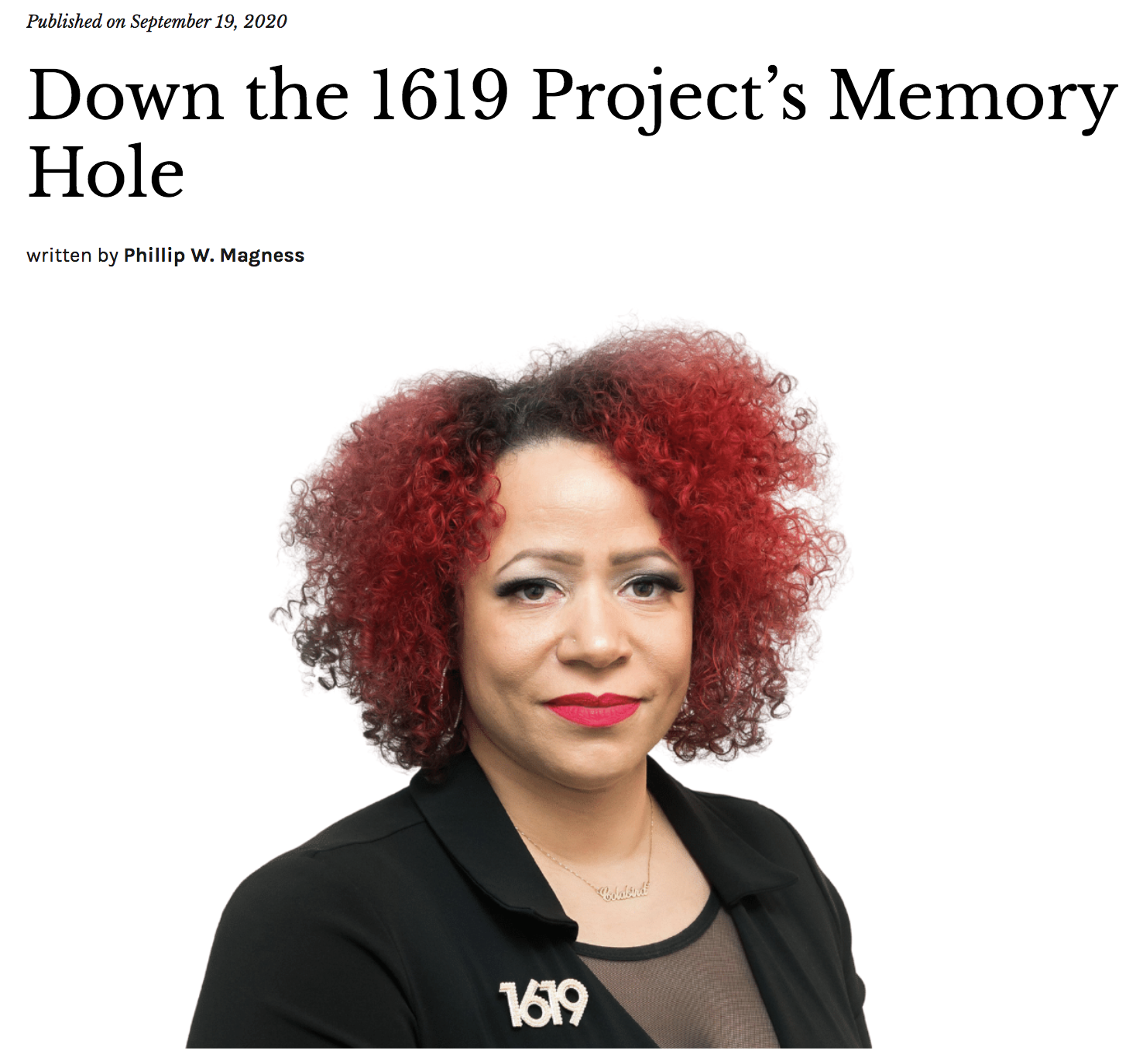 The issue is when America was founded. From the start Hannah-Jones claimed it was 1619, when the first ship containing 20-odd slaves arrived in America.  She asserted this repeatedly:

For several months after the 1619 Project first launched, its creator and organizer Nikole Hannah-Jones doubled down on the claim. “I argue that 1619 is our true founding,” she tweeted the week after the project launched. “Also, look at the banner pic in my profile”—a reference to the graphic of the date 1776 crossed out with a line. It’s a claim she repeated many times over. 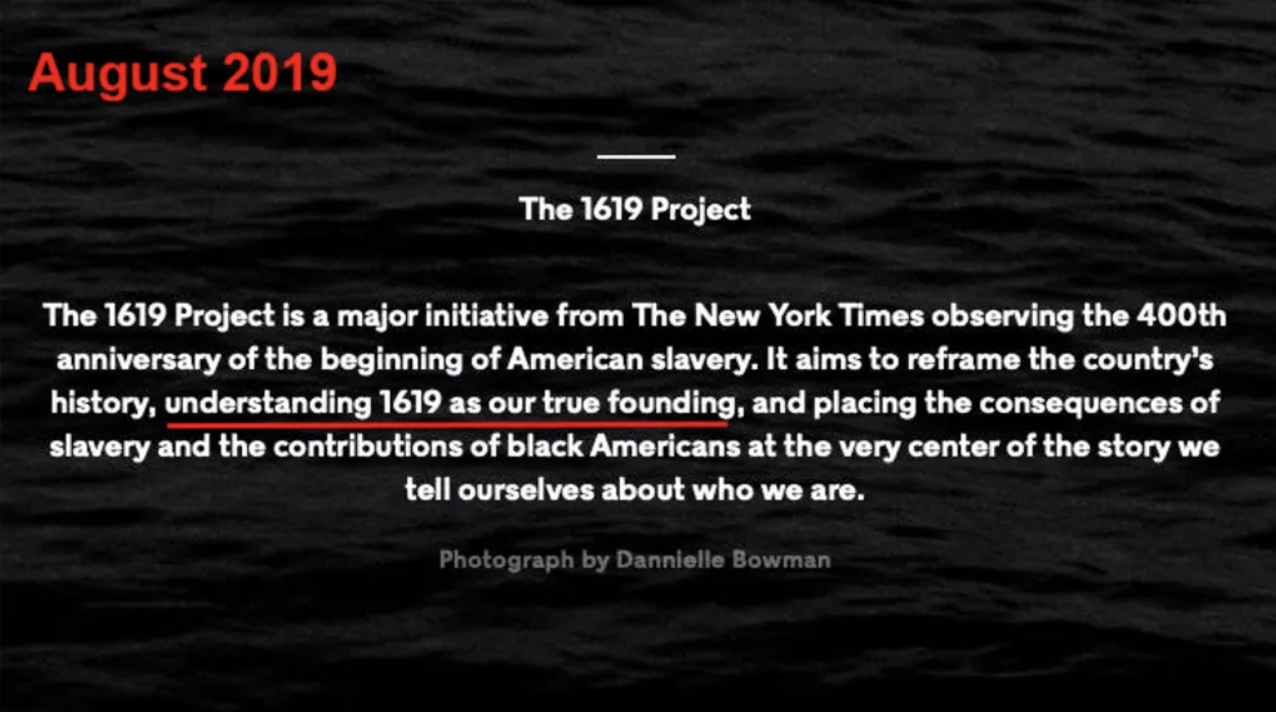 Hannah-Jones’s present Twitter header (click on screenshot). If she’s not replacing the “founding date” with the 1619 date, I don’t know what that means: 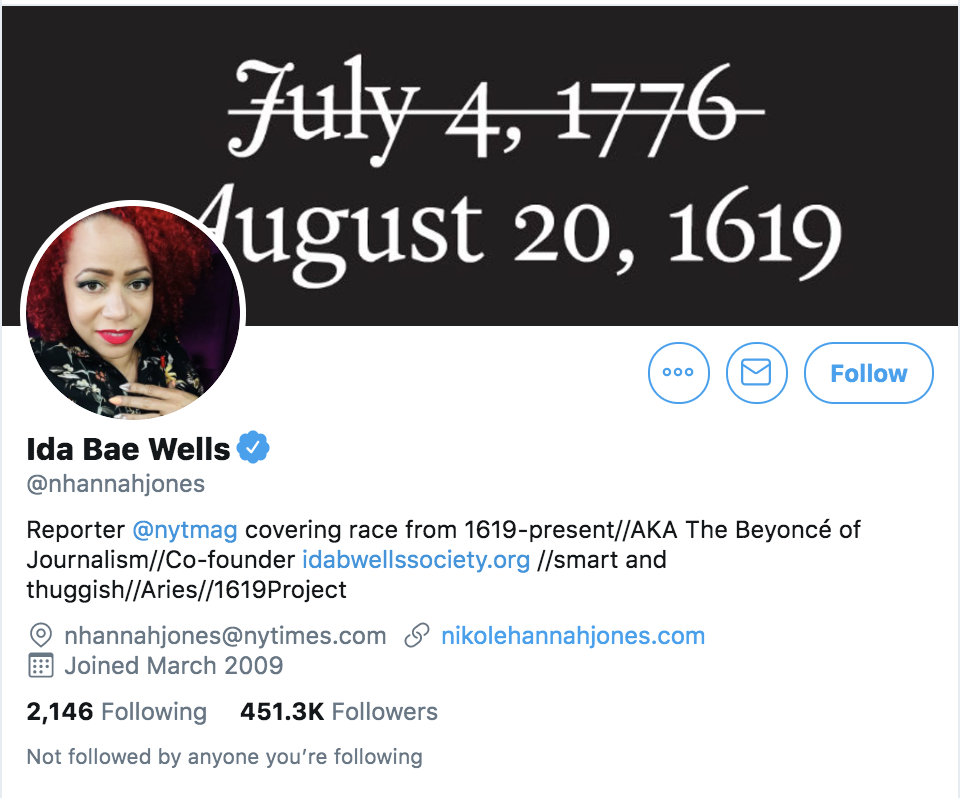 Throughout the controversy, the line about the year 1619 being “our true founding” continued to haunt the Times. This criticism did not aim to denigrate the project’s titular date or the associated events in the history of slavery. Rather, the passage came to symbolize the Times’s blurring of historical analysis with editorial hyperbole. The announced intention of reframing the country’s origin date struck many readers across the political spectrum as an implicit repudiation of the American revolution and its underlying principles.

Rather than address this controversy directly, the Times—it now appears—decided to send it down the memory hole—the euphemized term for selectively editing inconvenient passages out of old newspaper reports in George Orwell’s dystopian novel 1984. Without announcement or correction, the newspaper quietly edited out the offending passage such that it now reads: 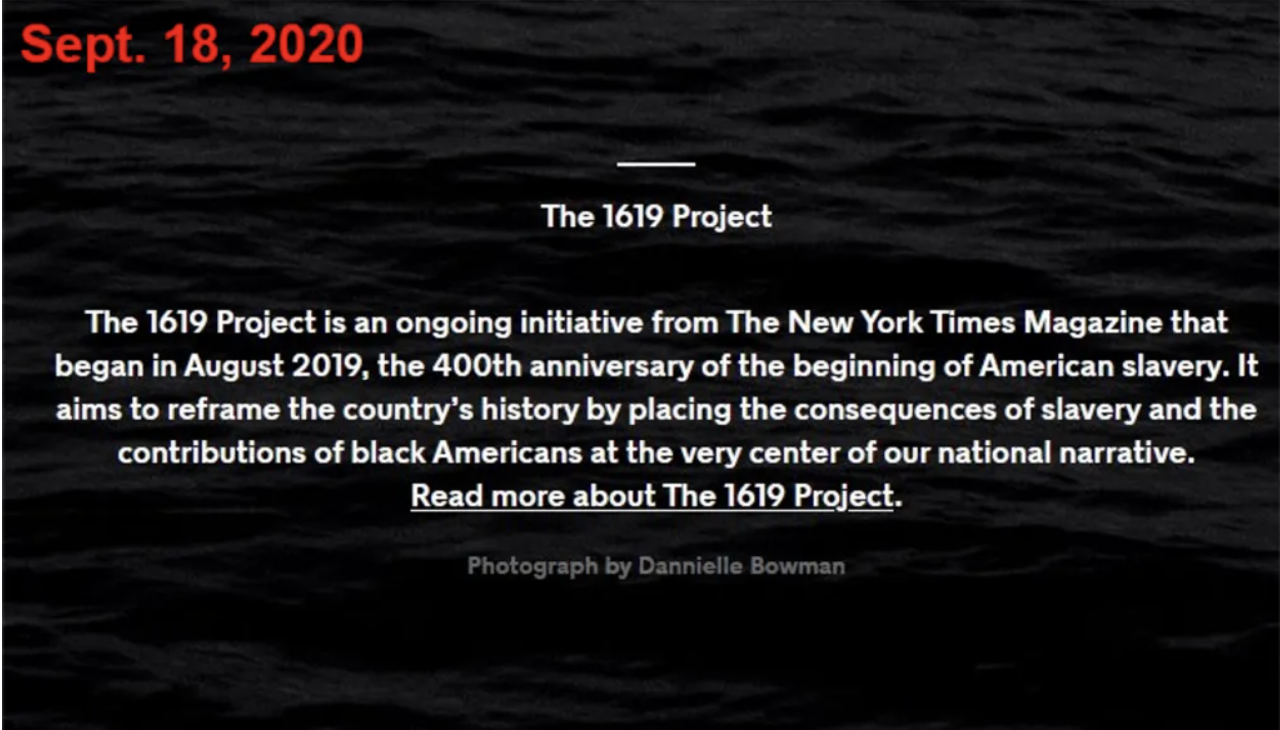 Magness continues, noting not that Hannah-Jones didn’t just make a sneaky correction, but claimed that she never said that 1619 was the founding date of America. And that’s simply a lie.

Discovery of this edit came about earlier this week when Nikole Hannah-Jones went on CNN to deny that she had ever sought to displace 1776 with a new founding date of 1619. She repeated the point in a now-deleted tweet: “The #1619Project does not argue that 1619 was our true founding. We know this nation marks its founding at 1776.” It was not the first time that Hannah-Jones had tried to alter her self-depiction of the project’s aims on account of the controversial line. She attempted a similar revision a few months ago during an online spat with conservative commentator Ben Shapiro. 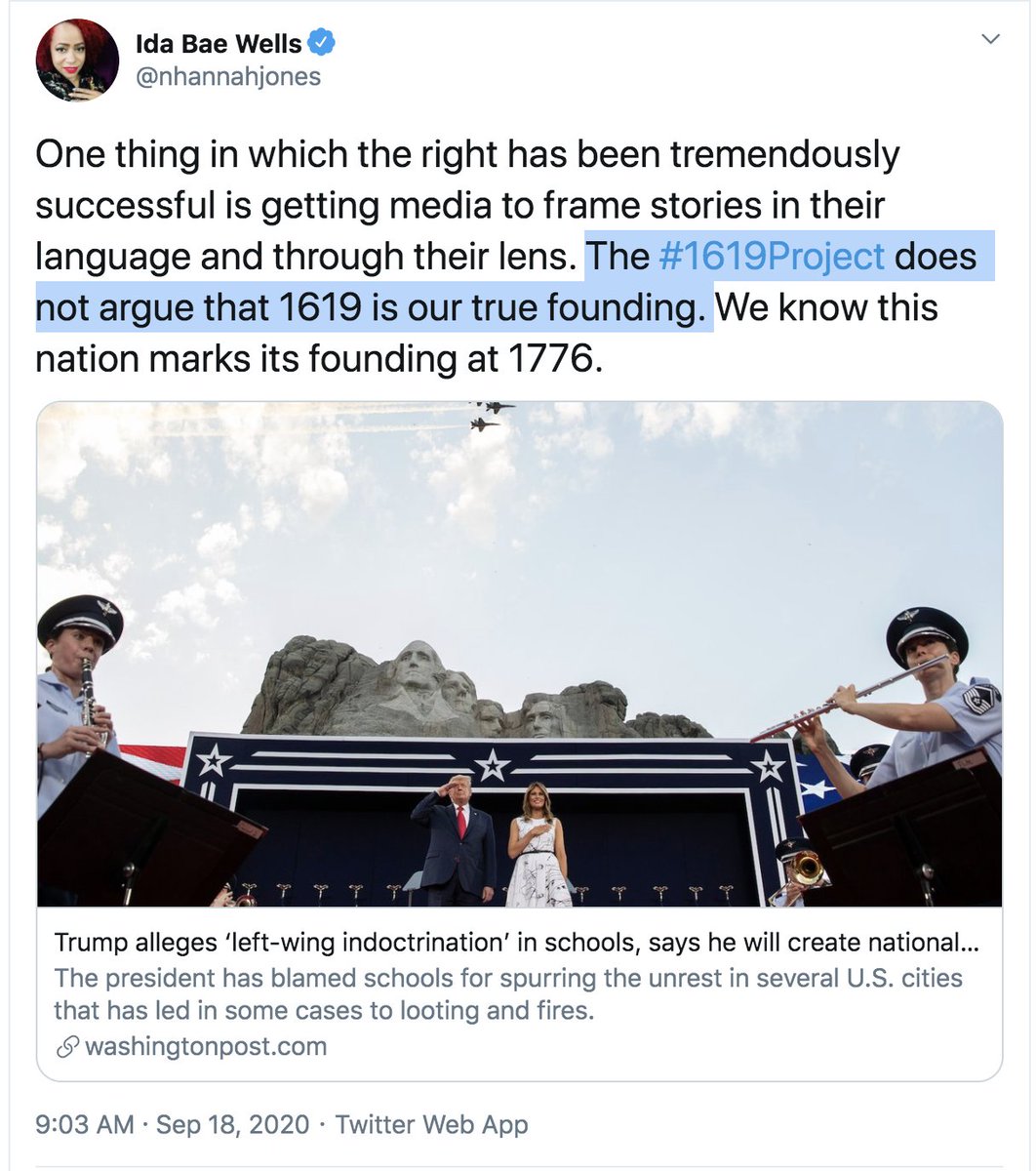 But this time the brazen rewriting of her own arguments proved too much. Hannah-Jones’s readers scoured her own Twitter feed and public statements over the previous year, unearthing multiple instances where she had in fact announced an intention to displace 1776 with 1619.

The foremost piece of evidence against Hannah-Jones’s spin, of course, came from the opening passage of from the Times’s own website where it originally announced its aim “to reframe the country’s history” around the year “1619 as our true founding.” When readers returned to that website to cite the line however, they discovered to their surprise that it was no longer there.

The Times quietly dropped the offending passage at some point during the intervening year, although multiple screencaps of the original exist. The Internet Archive’s Wayback Machine suggests the alteration came around late December 2019, when the 1619 Project was facing an onslaught of criticism over this exact point from several distinguished historians of the American founding.

A similar change was made in the print edition for schools, which originally contained the sentence “America was not yet America, but this was the moment it began.” That sentence was simply excised.

Now some will argue that this is a trivial change, and to that I’d say: “Are you kidding? July 4, 1776 is an iconic date in American history, and the NYT wants to change it to August 20, 1619, so that the founding of America coincides with the arrival of the first slaves.”

Others will say, “Well, so what? It’s just a minor emendation, and the Times made the change.” The problem with this is that it’s standard for a paper to note when a column or article has been changed, usually with an addendum on the page. This hasn’t been done. Like George Orwell’s Winston Smith, the paper has simply put its previous assertion (and not a trivial one) down the Big Memory Hole. It’s trying to hide its misstatements rather than admit to them. Worse, Hannah-Jones simply denied what she previously said.

Were I to make such a big claim on this site, and then retract it, I’d admit it—either with an emendation or in a separate post. That the NYT cannot abide by even these minimal standards of journalism makes me realize even more that the paper is allowing its ideological agenda seep into its news. And that agenda has also infused the secondary-school materials as well, for the Project was always intended to instill into American children the Times’s view of history. The problem, though,  is that the 1619 Project is not a work of history, but a work of journalism heavily infused with Critical Race Theory.

I’ll finish by saying this: I agree that the aims of the 1619 Project are admirable: to teach children about the horrors of slavery and of the subsequent bigotry and oppression suffered by African-Americans. And it’s very useful to highlight where and how the residuum of slavery, instantiated in current bigotry, still infuses America. But the Times has botched this project big time. If you can’t trust them on details like the above, can you trust the view of history purveyed to kids in school?