The University Times, the student newspaper of Trinity College Dublin, reports that an invited address by Richard Dawkins has been canceled. The rescinded invitation was initially tendered by “The Hist”, the University Historical Society, who withdrew it. Why? Because Dawkins’s past statements on Islam and sexual assault might cause “discomfort” to the students. Click on the screenshot to read: 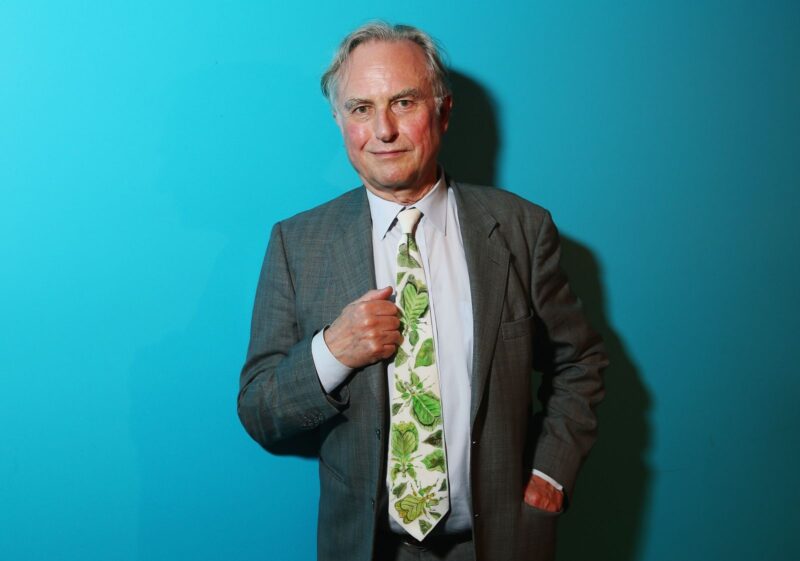 Here’s a summary of what happened, which is almost humorous in the emphasis on “discomfort”—apparently the most important factor in deciding whether a speaker is appropriate (my emphasis):

The College Historical Society (the Hist) has tonight rescinded its invitation to Richard Dawkins to address the society next year.

Auditor of the Hist Bríd O’Donnell announced the cancellation in a statement on her [actually The Hist’s] Instagram page, saying that she had been “unaware of Richard Dawkins’ opinions on Islam and sexual assault until this evening”, adding that the society “will not be moving ahead with his address as we value our members comfort above all else”.

“The invitation to Richard Dawkins to speak at the society was made by my predecessor and I followed up the invitation with limited knowledge of Mr. Dawkins”, O’Donnell said. “I had read his Wikipedia page and researched him briefly. Regretfully I didn’t look further into him before moving forward with the invitation.”

“I want to thank everyone who pointed out this valuable information to me”, O’Donnell added. “I truthfully hope we didn’t cause too much discomfort and if so, I apologise and will rectify it.”

. . . In an email statement to The University Times, O’Donnell said: “I was not previously aware of the harmful statements made by Richard Dawkins. The invitation was issued in advance of this committee’s tenure, and we are deeply grateful to the members and students who brought this to our attention.”

“The comfort of our membership is paramount, and we will not be proceeding with Professor Dawkins address. I apologize for any distress caused by this announcement, and the Hist will continue to listen and adapt to the needs and comfort of students”, she added.

It looks as if a social-media mob descended on Ms. O’Donnell and “convinced” her to withdraw the invitation. Apparently what Dawkins said in the past (more on that in a minute) is sufficient to prevent him from ever speaking again, as I’m pretty sure his address to The Hist would not have been about Islam or sexual assault! And, of course, by no means should any speaker make the audience uncomfortable!  The Hist needs to learn the lessons of history: every controversial and progressive talk makes some people uncomfortable.

I wrote Richard to find out what he was going to talk about and got this response:

I had not been going to speak about anything in particular. I had been graciously offered a Gold Medal, and I would doubtless have been expected to say a few gracious words in accepting the medal.

Ironically, the Gold Medal, not mentioned in the report, was described in the invitation as “the prestigious ‘Gold Medal for Outstanding Contribution to Public Discourse'” (and the Medal has presumably been withdrawn as well).

So what were the offensive statements? Gript reports on the sexual assault issue:

And what has he said about sexual assault, you might ask?  Well apparently it refers to two tweets he sent in 2014 [below], in which he suggested that being drunk and unable to remember being assaulted might make it more difficult to secure a prosecution:

Is he right or wrong there? That’s a matter of opinion. Are those views so dangerous and discomfiting that students should be protected from them? Not on your life.

Here are the 2014 tweets that Gript says are at issue. Some people apparently construed them as “blaming the victim” tweets. Given today’s climate, I would not have made them myself, but surely they don’t warrant canceling a talk six years later. 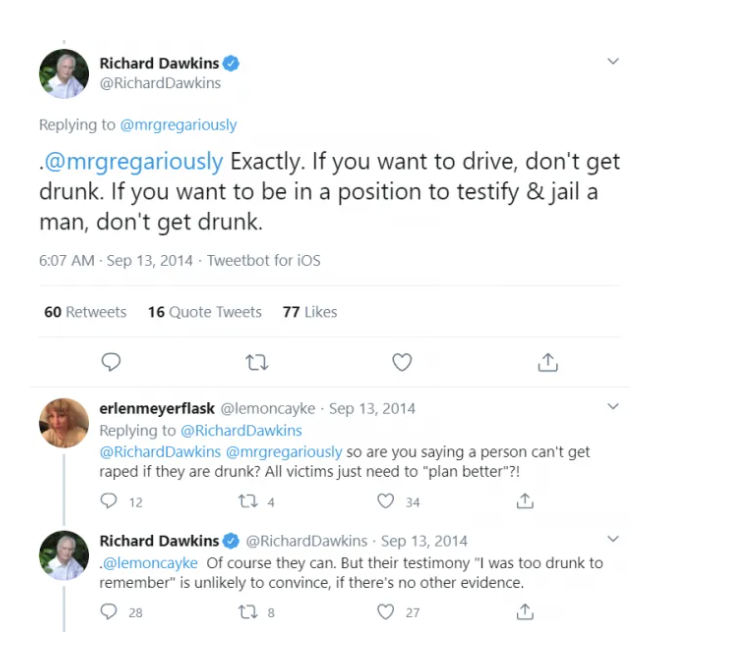 As for the anti-Islam tweets, well, Dawkins has issued many of those. And note that they’re anti-Islam, not anti-Muslim. It would have helped had O’Donnell specified which tweets or views made Dawkins an unacceptable speaker. At any rate, Dawkins has also issued at least as many tweets (and an entire book) on religions besides Islam, especially Christianity. Apparently those opinions aren’t supposed to make people uncomfortable!

The fact that Islam is singled out above the other faiths criticized by Dawkins tells us what The Hist is really afraid of: not of making religious people of any stripe uncomfortable, but of making Muslims uncomfortable. This is again the bigotry of low expectations, for Muslims should be able to listen to Dawkins as readily as Christians. And if you’re “uncomfortable” for statements made in the past, but probably not planned to be made in the scheduled talk, well, suck it up—along with all those who beefed to O’Donnell and made her cancel the talk.

This is concerning. College is not about comfort – indeed, it's arguable that one of the key things higher education does is push people outside their comfort zone, as part of the process of self-improvement. https://t.co/dKZ54MHYtn