I hope you’ve kept up at least minimally with what I’ve written about the University of Chicago and the Kalven Report—the 1967 document that set the tone for University discourse by declaring that the school would remain neutral on all issues of morality, ideology, and politics, with a few rare exceptions having to do with the University’s ability to function. (See here for some background.) Written in response to demands that the University take stands on things like Communism, civil rights, and the Vietnam War, the Kalven committee decided that no stands should be taken on such issues, however popular, lest they chill speech, however unpopular. This was all in the service of the University’s main mission to foster learning through free discussion of ideas.

I’ve written a few times about how the University lately seems to be violating the Kalven principles, mainly by departments and administrators issuing statements about race, Black Lives Matter, and so on—statements that are explicitly political and ideological. Beyond asserting that the University does not discriminate on grounds of race, gender, handicap status, and so on, I don’t think we should be asserting anything more, for some of the statements of Critical Race Theory and tenets of the Black Lives Matter movement (see below) are things that warrant discussion, not forced and unanimous agreement—however laudable the ultimate goal of equality.

Somehow, in these tumultuous times, department after department in my school has been unable to resist issuing these statements, some of which border on self-abasement and ritual absolution, if not virtue signaling (see here and here, for example). In my view—although the University has not explicitly addressed this—departments and other University units should abide by Kalven principles since it is these units that are the very locus of free expression as well as the chilling of dissent. You probably won’t get in much trouble if you criticize the University’s President or Provost, but if you’re a grad student or faculty member and go against a departmental statement about, say, Black Lives Matter, you could lose your mentor, your tenure, or your promotion. This is why it’s vital that official units of the university abide by Kalven.

Individuals, on the other hand, are free to say what they want, and are encouraged to do so by the University. Kalven makes it clear that the unit of free expression is the individual, whether it be faculty member, staff, or student.

Yet the department and university-unit statements keep appearing at the U of C. One of them, which I just learned about, was put up by the Smart Museum (the university art museum) on June 5. Here it is. 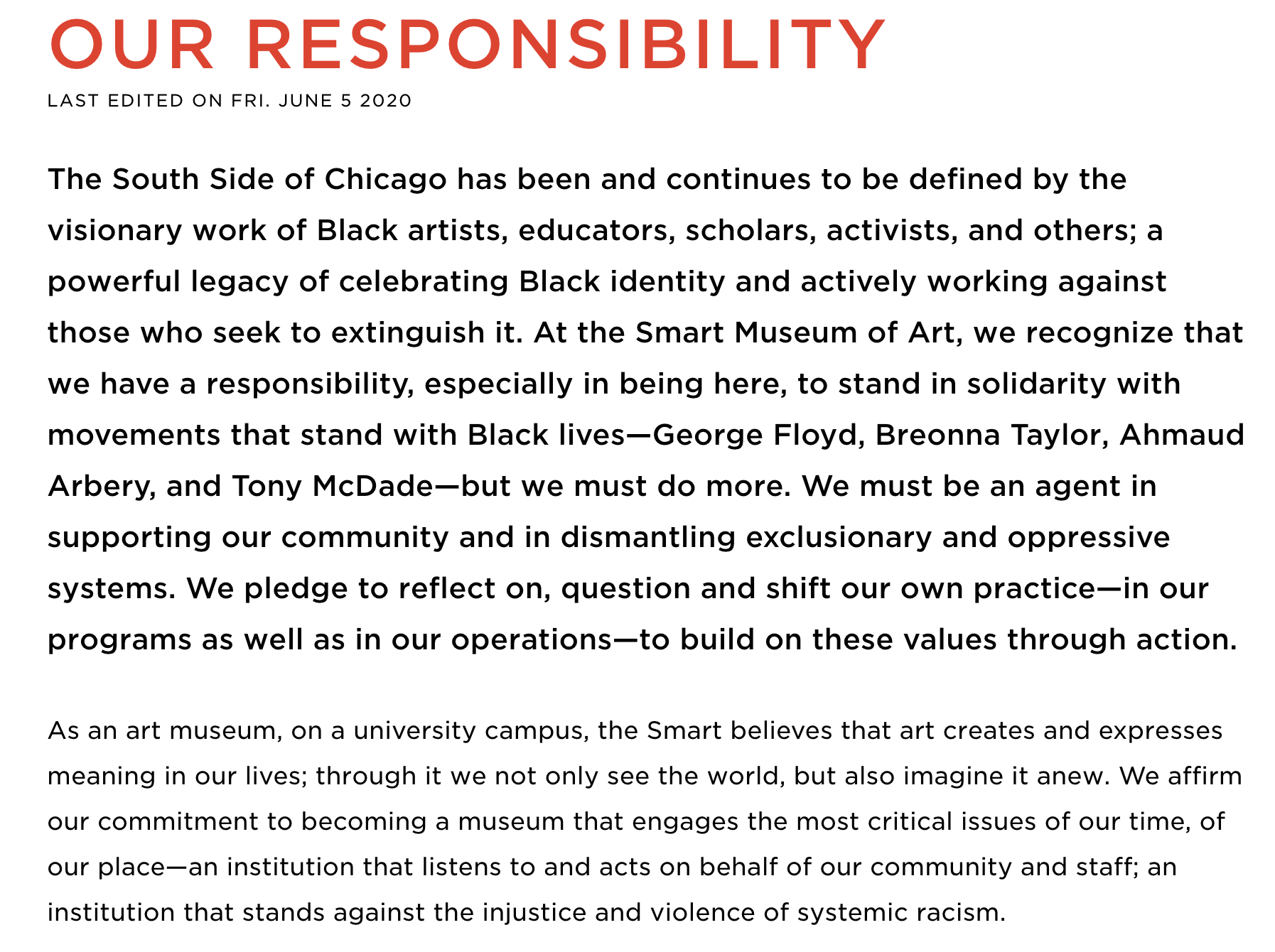 This is explicitly a call for political action—telling students, faculty and employees what they should do. That is what Kalven is designed to prevent. It’s also a statement of unanimity (there are no signatories), so it represents an official position of the Museum. And that means that dissenting from the pledge to “dismantle exclusionary and oppressive systems” could get you in trouble.

This one’s from the Dean of our well-known School of Social Service Administration:

This also calls for individuals to act: White people are supposed to act one way, and “non-black people of color” another. They must act. Again, this violates the Kalven principles. While I of course agree that society needs to address racial disparities, it’s not the University’s call to tell people what they must do or how they should act.

But wait! There’s more! There’s an article in a right-wing site (The Federalist) by a right-wing Chicago undergraduate, but the instances she points out are genuine even if you want to dismiss anything that appears on a Right site. (Truly, you can’t expect mainstream media, mostly on the Left, to call out abrogations of free discussion.)

We’ve met Evita Duffy before when, in a “get out the vote” campaign, she was harassed for expressing conservative sentiments by holding up a whiteboard saying, “I VOTE BECAUSE the coronavirus won’t destroy America, but socialism will.” While I disagree with the last bit of that statement, as I am in favor of some socialism, I don’t think Duffy deserved to be demonized for what she said, and certainly didn’t deserve to be called a racist for it (apparently mentioning the coronavirus is racist). Her article recounts some of the hateful pushback she got.

Now Duffy has written for The Federalist, and gives several more examples of Kalven violations. I’ll just concentrate on the links she gives that are new to me (I’ve already posted on the English Department and Human Genetics Department statements), for Duffy’s new links interest me more than her conservative gloss on them. 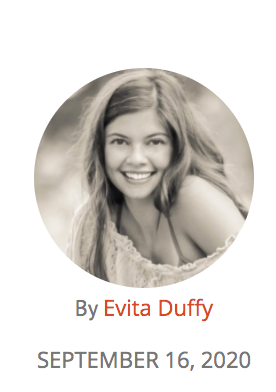 Duffy highlights two emails from Department heads that, I think, violate Kalven by being official statements of a chairperson speaking for a department. Here’s one from the chair of our Physics Department: 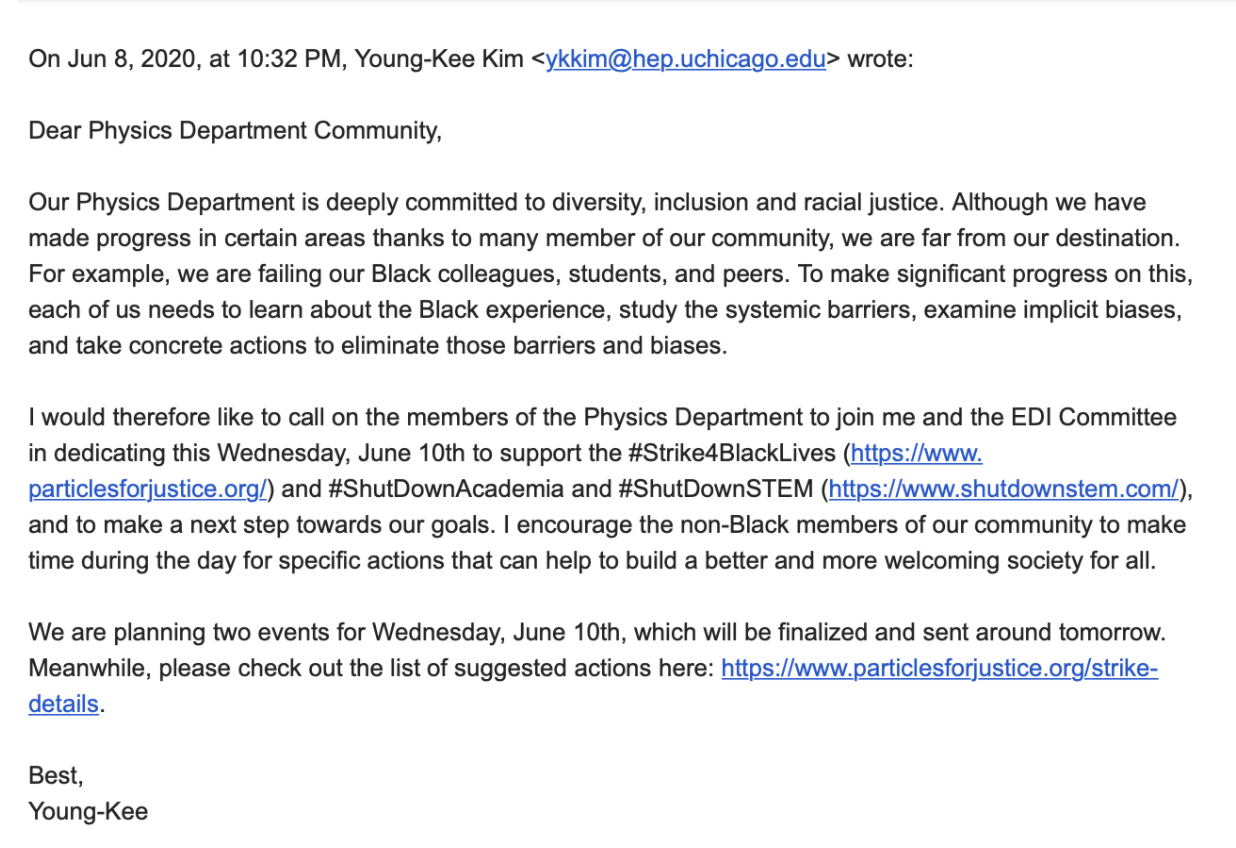 This is again a call for action, as well as an encouragement for “non-Black members of our community” to act a certain way. It’s one thing to make people aware of events, but another to pledge a department to adhere to certain political and ideological tenets, and to encourage students to promote a political point of view.

This is from the Chair of the History Department:

Note that this isn’t just an affirmation of racial equity, but a call to adhere to the platform of Black Lives Matter, which includes contestable statements like demands for reparations and calls to defund the police.

Now you may ask yourself, “What’s so bad about those statements?” After all, their tenor is to promote racial equality, which is what enlightened people want.  But the ways that they do this—by urging action and group adherence without dissent to discussable issues—is exactly what Kalven was designed to prevent. You can bet that if you favor equality of opportunity for everyone but don’t adhere down the line to the principles of Black Lives Matter, or think that affirmative action is debatable, you will be demonized. And you can avoid that by doing what many conservative students do—self censor. That is a chilling of discussion that shouldn’t take place on any college campus, much less one as famous for free speech as The University of Chicago.