In July I wrote about a statement that the Department of English put on its webpage—a statement about social justice that, I thought, contravened the University of Chicago’s Kalven Principles by allowing an official unit of the University to espouse and adhere to ideological principles. (Kalven encourages individual faculty to state their views, but forbids the University, with a few narrow exceptions, from adhering to any political, moral or ideological principles.) Here’s the statement, which was not an expression of individual opinion but an official position of the faculty of the English department. There are no signatures, and no dissenters. 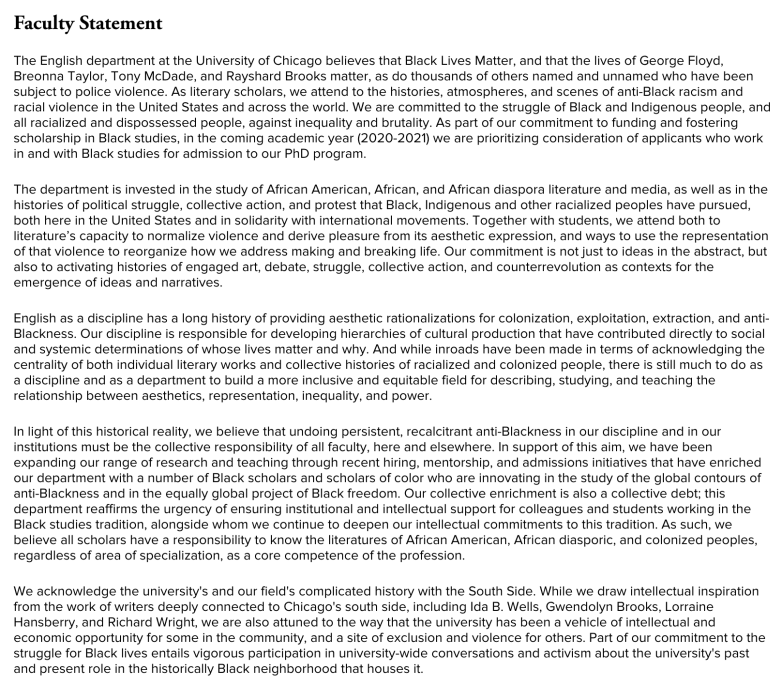 This, I thought, violated the Kalven dictum that the University must take no political positions lest it lead to a chilling of speech and quashing of free discourse—one of the pillars of the University of Chicago. Departmental statements are equivalent to official University statements because departments are not only official units of the university, but are the very places in which saying “wrong” and “offensive” things could penalize your career, your tenure, and your promotions. Individual faculty are, as always, free to express their opinions, even on a department webpage, so long as they’re clearly described as the opinions of individuals.

But I digress. Note the following statement in the report above, issued July 20.

As part of our commitment to funding and fostering scholarship in Black studies, in the coming academic year (2020-2021) we are prioritizing consideration of applicants who work in and with Black studies for admission to our PhD program.

This has now been changed. First of all, there’s a watered-down version of the above in the English Department “news” section, while a stronger statement has migrated to the main English department page itself.  What’s interesting about the new one is that although it also purports to be the “July 2020” statement, there’s been one change (click screenshot below to see full statement): 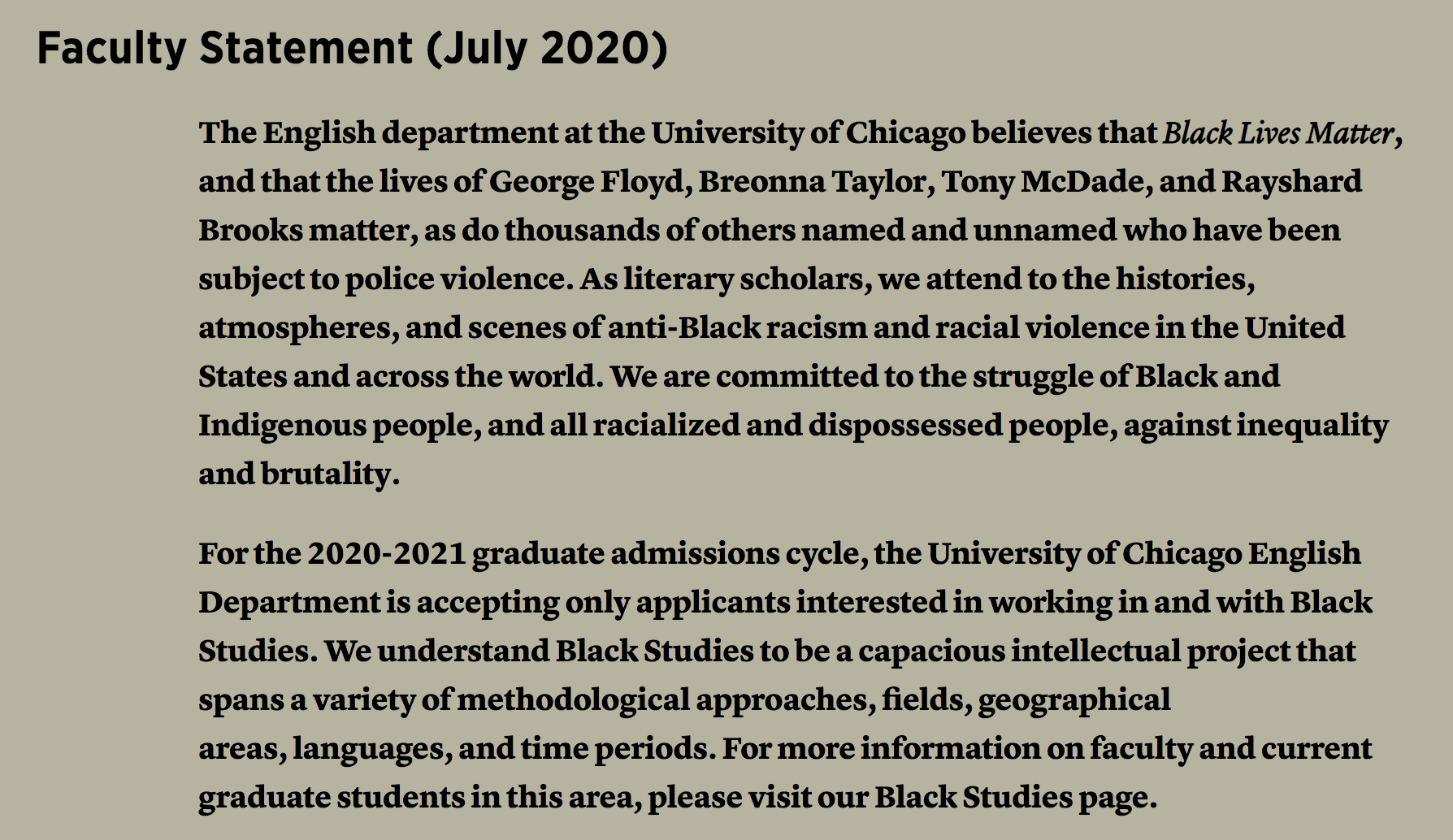 The change, in the second paragraph above, is this statement:

For the 2020-2021 graduate admissions cycle, the University of Chicago English Department is accepting only applicants interested in working in and with Black Studies. We understand Black Studies to be a capacious intellectual project that spans a variety of methodological approaches, fields, geographical areas, languages, and time periods. For more information on faculty and current graduate students in this area, please visit our Black Studies page.

In other words, the department isn’t just prioritizing applicants who work on Black studies, but are requiring all applicants to work on black studies. If you want to study Milton, Faulkner, Donne, Naipal, Marquez, or anybody like these, you’re flat out of luck. This is an unconscionable tilting of a department not just toward one area of English, but clearly towards an ideology that infuses black studies: Critical Race Theory. (You can see this by reading the statements above.)

Now the English department has the right to set its own curriculum, for curricular matters don’t violate the Kalven report (though the statements above do). If they want graduate students only in black studies, well, that’s their right. But it isn’t right. It’s a hamhanded attempt to be anti-racist, but at the expense of the very purpose of the university. What about all those potential applicants who want to study other areas of English, or those many professors in English that don’t do black studies? Well, it’s too bad for them.

And does anybody really think that Black studies anywhere represents an area in which all ideas are entertained and debated freely, and in which there is no received wisdom, and no statement considered off limits because it causes “harm” or “violence”? If you think that, you haven’t been following Critical Theory.

This saddens me—not because the English Department is giving more attention to race, but that it’s giving all its attention to race, at least for the time being. And insofar as Black studies hew to Critical Race Theory, this also represents a chilling of discourse. It’s part of the Awokening of the University of Chicago that I feared would come, but is not only here now, but also seems to have its nose—if not its whole head—inside the the tent.