Not long ago, the Institute of Politics of the University of Chicago, which is headed by David Axelrod, held an event in which our students were invited to submit pictures explaining “Why I Vote.” (Axelrod, you may recall, is a political consultant who was the architect of both of Barack Obama’s Presidential campaigns and, for a time, was Senior Advisor to Obama.)  Unfortunately, one student, Evita Duffy, a conservative who’s also the daughter of former Republican Representative Sean Duffy, submitted this response: 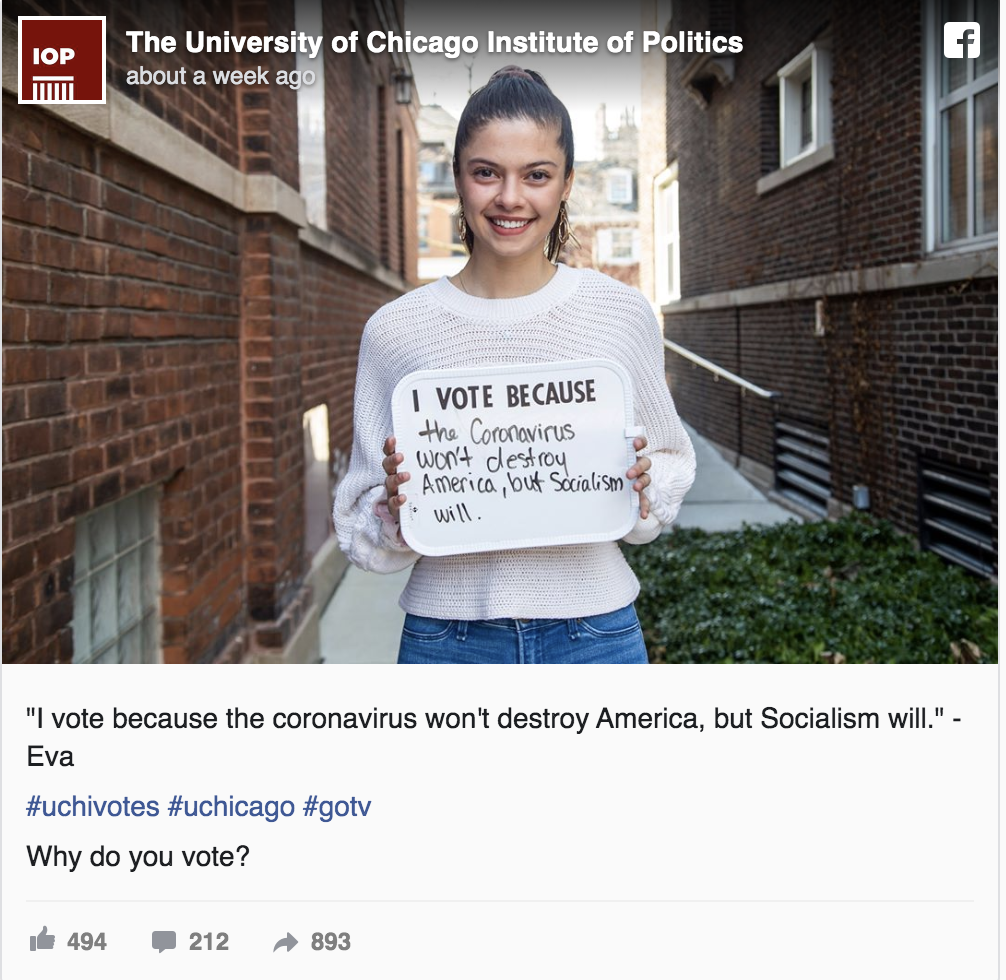 She was excoriated on social media.

Now why would that be offensive to other students? You’re probably guessing because it’s a conservative viewpoint as well as an implicit dig at Bernie Sanders. That’s what Axelrod himself guessed in his letter below. And you’d be partly right—but mostly wrong. Nope, it’s racism, stupid! Why? Because the mention of coronavirus as a dangerous plague is an implicit and racist dig at Asians—but only to the Woke.

As Ms. Duffy reports in her piece below, she was subject to the usual social-media pile-on, one that she wasn’t expecting (but given the increasing wokeness of students, even here, I would). Here’s her story from the student newspaper, the Chicago Maroon (click on screenshot):

A few quotes (she also castigates Axelrod for not defending her right to speak, but he’s since done so). First, the pile-on:

As a conservative Hispanic woman, I am accustomed to being in the minority opinion, especially on a liberal college campus. I am a proponent of free speech, and I hoped my white board message might even encourage a lively and robust debate on economics. However, I was naïvely unprepared for the onslaught of online hate and threats of violence I received.

Fellow students attacked my character, my intellect, my family, my appearance, and even threatened me with physical violence, using foul and offensive language. I was called a racist and a xenophobe. Some compared me to animals. Others declared that they would personally stop me from voting, and many defended the personal attacks, saying I deserved to be bullied and that I don’t belong at the University of Chicago on account of my beliefs. I was told by many that I was the most hated person on campus. It was frightening. It was also hurtful, since some of the attacks came from people I considered friends.

Here we see that racism predominated in the attack, something another student makes clear (see below).  And although I disagree with Ms. Duffy’s politics, she seems like a rational person who, though conservative, welcomes criticism and encourages discourse.

When a young Hispanic woman joins a fun “get out and vote” initiative and receives this level of social shaming, deeply personal attacks, and threats of violence, conservative students get the message: There is a price to pay for daring to speak your mind or questioning the liberal orthodoxy on campus. This University-endorsed intolerance is why so many students self-censor and some, sadly, simply give up questioning and thinking for themselves. The path of least resistance is to join the campus groupthink. I believe our university is poorer for this. When I applied to the University of Chicago, I knew it was a liberal place, but I honestly believed our University president, Robert Zimmer, when he said our school was committed to the Chicago Principles, which protect free speech and encourage open debate. Right now, that claim feels like false advertising.

If faculty and fellow students disagree with any of my opinions, I am happy to hear it. In fact, I encourage it. My hope is that this sad episode leads to serious reflection on the value of civility when we do debate and disagree. I hope it will also draw attention to the importance of intellectual and political diversity on campus and in classrooms. Hiding behind accusations of “xenophobia” and “racism” to silence a discussion on the virtues of capitalism vs. socialism is unproductive and intellectually dishonest. Shaming or socially ostracizing people who have sincere but different points of view is the opposite of tolerance. Our country and our politics are already so polarized. The University of Chicago needs to live up to its own standards and set an example of civility, diversity, and tolerance during these hyper-partisan times.

That’s pretty eloquent. Indeed, students with conservative viewpoints, when they aren’t silenced, silence themselves because the atmosphere on campus is overwhelmingly Leftist, and nearly all our professors are of that stripe. Duffy is merely articulating what everybody knows, and has the courage to do so. I would be glad to have a discussion with her.

Not so with one of her critics, undergraduate Darcy Kuang, also writing in the Maroon (click on screenshot below). From the rude title (“Hey IOP Whiteboard Girl”) to its angry and unbalanced accusations, Ms. Kuang, who also happens to be a deputy editor of the Maroon and got a lot of space to rant, shows the kind of kneejerk offense and hatred that characterizes woke students, as well as an immediate jump to accusations of racism.

Although nothing about Duffy’s “whiteboard” suggests that she’s a racist, that’s basically all that Kuang calls her out for. Why? Because Kuang is of Chinese ancestry and happens to have relatives in Wuhan, where Covid-19 is pervasive. I urge you to read Ms. Kuang’s piece, which includes the following bits:

In your op-ed, you defended your message by saying, “The fact is, as awful as the coronavirus is…its number of victims pales in comparison to the tens of millions of people who have died at the hands of socialism and communism.”

Your statement is factually true, and judging by the comments under your op-ed, many agree with you. But the question is, regardless of what ideologies you do and don’t believe in, why do you feel the need to compare the casualties of the coronavirus to those of socialism and communism? Why is this comparison relevant or necessary?

. . . And that is what’s wrong with your message. You did not respond to an ongoing public health crisis, a tragedy that has killed over 3,000, and a collective trauma for Chinese people, with sympathy, empathy, or concern. Instead, you thought: Aha, what a great opportunity for me to express my dislike for Bernie Sanders.

. . .Since you are so quick to harp on your identity as a Hispanic woman, I am sure you don’t need me to explain to you why it is racist to treat the sufferings of marginalized communities as trivial, especially when that suffering is ongoing.

As for why your message was xenophobic, it’s even more obvious: You made Chinese students feel like our trauma is unrecognized and unimportant at this school. Your message suggests that our trauma is only worthy of being the backdrop of “important” discussions like capitalism vs. socialism.

Chinese students at this school don’t have to have any personal connections to Wuhan like I do to feel the pain. We see the death toll rising. We see how this virus has torn apart families. We witness the fear of our family members and friends, not knowing how much longer their lives will be put on hold.

Even though we don’t currently live in China, we are not shielded from the influence of the outbreak. The coronavirus outbreak has amplified racism toward Asians around the globe.

. . . We are still mourning our dead and figuring out how to process our trauma.

“Trauma” is a repeated theme here, familiar from those marinated in identity politics. In fact, coronavirus is sweeping the globe, and many people are scared and mourning loved ones, not least the Italians. Families have been torn apart everywhere, and Chinese students have no special claim to victim status: they are neither in China, many don’t have suffering relatives, and they are not “minoritized”, at least not at the University of Chicago and certainly not in China. Kuang’s excess of venom doesn’t even have a clearly empirical origin: I strongly suspect that Duffy used the virus simply as a current trope of something that’s hurting America, as it’s hurting many countries. Huang chooses to use it as an attack on Asians in particular, and I can only speculate that she’s engaging in identity politics to flaunt her own supposed status as a minority and to call out her opponent as a racist.

As I said, Axelrod took the animus against Duffy as a sign of anger by Sander supporters. Ms. Kuang lets us know, in a p.s. (after all, she gets to do that because she’s an editor of the paper), emphasizing again that her anger is based not on criticism of socialism, but on Duffy’s supposed racism. Kuang’s addendum:

P.S. Since the IOP came to your defense [JAC: see letter below], here is a brief message for Mr. David Axelrod as well. You contend that people’s sharp responses are mainly aimed at the second half of Evita’s message about socialism, and maybe that is true for some people. But the statement that the minimization of coronavirus alone isn’t sufficient to elicit sharp responses from the student body is dismissive in itself. So if you can’t fathom that anyone is more outraged by the first part rather than the second part of her message, you are hearing one right now. Feel my anger.

Yes, yes, I feel her anger. But I have no sympathy for it. Curiously, while the conservative student is trying to effect conciliation, the liberal one (Kuang) is deliberately fostering division. But that’s what identity politics does, and what those who practice it intend to do. While I’m on the Left, I feel more kinship to the rational and conciliatory Duffy than to the livid and outraged Kuang.  Accusations of racism should not be tossed around so easily, and with so little evidence.

Finally, Axelrod himself weighed in, and, while not fully understanding the reasons why Duffy was attacked, at least he defends free speech at the University of Chicago. His statement is in the tweet below, which has the same content as does his letter to the Maroon (click on screenshot):

Axelrod condemns the threats that Duffy got, insists that her message was not one of hate speech (indeed!), and implicitly defends the Chicago Principles. Just a brief quote:

Standing up for free expression in fraught and polarized times is difficult and sometimes deeply uncomfortable. Yet it is precisely in moments like this that it is most important that we hold fast to this principle. Because if this student’s freedom of expression is abridged today, everyone’s is at risk.

We welcome any student who has a point of view on this or any post to respond but to do so without personally impugning or threatening its author. At the same time, any student who offers an intentionally provocative idea can expect a strong response.

The IOP has a strong record of bringing speakers and visiting fellows from left, right, and center to campus to rigorously discuss and debate different visions for our country. The IOP cannot and should not refuse to air a controversial view simply because many, or even the majority, object to it.

The rationality of Duffy and of Axelrod make me proud of this University, but the rages of Kuang drive me to despair. No, racism is not everywhere at the University of Chicago, and it wasn’t on Duffy’s whiteboard.