The termites are dining well in the world of science, for the two most prestigious science journals in the world, Nature and Science, are both going woke.  And by that I mean that they’re buying into tenets of Critical Theory Wokeness that are palpably unscientific.

There are two scientific conclusions denied by ideologues because they’re politically inconvenient. The first is that there are behavioral differences between males and females that are both partly genetic and the result of natural selection. The second is that sex is “binary.”  Both of these factual statements are denied on the mistaken grounds that, if they be true, they would mandate sexism and transphobia. That’s not true, of course. As I’ve written many times, human culture has often involved overcoming our evolved biological features in the service of morality and equality. Recognizing that biological sex is binary, for example, shouldn’t fuel transphobia, and scientists should work to make sure it doesn’t. Nevertheless, the idea that sex is nonbinary and men and women are, on average, identical in their behaviors and preferences have become conventional views in progressive politics. If you deny them, you’re toast.

I won’t reiterate why biological sex (defined in animals as males having small gametes and females large ones) is binary in most animals; you can see my defense of this claim here, here, here, here and here. And if it weren’t true, biology would be in deep trouble: every paper that looks at differences between the sexes would have to be scrapped because “sexes” are now seen by the Woke as a social construct, not a biological reality. Indeed, all science journals, including Nature (as we see below) tacitly accept the binary nature of sex.

Gender is a bit less binary, as there are individuals who identify as neither male nor female, even though their biological sex is clear. But gender is still strongly bimodal, as the vast majority of individuals identify as either male or female. But let’s leave gender aside and talk about sex, which is the issue when we come to biology.

As the tweets below show, and as discussed in the Quackometer article below the tweets, Nature is starting to put disclaimers in its reportorial section about both sex and gender being nonbinary. Meanwhile, in the refereed scientific reports that have made the journal selective and famous, the researchers blithely talk about sex as a binary. The two departments of the journal really need to get their act together.

The reason for the waffling, as the article from Quackometer speculates, is “ideological capture”.  But more on that later. Let me just add that the denial of the binary in animal (and human) sex has also been promulgated by three evolution societies, as I wrote about here. It’s truly shameful when scientific organizations have to deny truth so as not to anger easily offended ideologues. And it’s equally shameful for Nature to do this.

The kerfuffle was brought to my attention by Matthew, who simply sent me the following tweets. They tell the tale. The first tweet, from writer Jesse Singal,  links to the Quackometer article that summarizes Nature‘s confused wokeness:

What's going on at Nature is worrisome. It is INCREDIBLY creepy that whenever sex comes up, the publication feels the need to print that parenthetical, like some sort of mantra to ward off wrongthink. This is not normal.https://t.co/GoIehi6R9h

Below: in one article, Nature both denies binary sex and then acts as if it’s real:

This is just embarrassing for @nature.

They report on science that shows sex needs to be taken into account with covid, but still cop out and vomit unscientific nonsense that sex is "neither binary nor fixed."

Do they also report on Bigfoot? pic.twitter.com/S0svdJwwJK

This 2019 @nature article on same-sex sexual behaviours clearly slipped through the net.https://t.co/6380mMl1Um pic.twitter.com/JyGUQif57z

cos it's not hard to find the editor of nature treating sex as a binary when highlighting papers in her journal https://t.co/pKJKeun4gw

Now the summary and analysis from Quackometer in an article written by Andy Lewis (click on screenshot). This is a very good piece that captures the insanity of Nature’s behavior. 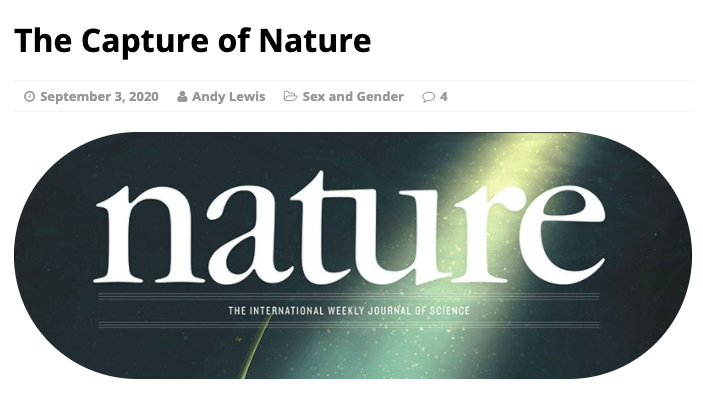 Here’s the disclaimer Nature puts in its news articles (quotes from Quackometer are indented). The journal not only “recognizes” that neither sex nor gender are binary, but doesn’t even define gender. I’ve put the disclaimers in bold:

In July 2020, a news item reported on “The gender gap in cystic fibrosis”. The article noted how women appear to have poorer outcomes than men, and die earlier,

A comprehensive analysis in 1997 of more than 21,000 people with cystic fibrosis in the United States showed a median life expectancy of 25.3 years for women and 28.4 for men1. The bacteria associated with lung decline and early death were also found to be present in women earlier than in men.

It then declared “(Nature recognizes that sex and gender are not the same, and are neither fixed nor binary.)”

Why it has put this odd disclaimer is not made clear. It makes no sense. The article is about differences in outcomes for people with different sexes (male and female). The article is quite clear about this. It talks of how “females could have a poorer response to [] treatment”, and talks of genetic differences between the sexes. The article makes sense if you accept the common use of the word gender in the article title as a synonym for sex – maybe to assuage the more squeamish American audience.

But the odd disclaimer wants to make it clear that sex and gender are not the same. What the meaning of ‘gender’ is in the article then is not made clear. And it goes on to say that neither sex or gender are not binary, despite the whole article being based on the binary differential experience of women and men, boy and girls, males and females to the course of cystic fibrosis and its treatments.

An article published in August 2020 declares, “Sex differences in immune responses that underlie COVID-19 disease outcomes”. An editorial on this paper noted, “The researchers noticed that male participants’ typical immune response to infection differed from that of female participants, which could explain the more severe disease often observed in men.”

It then went on to add a similar disclaimer, ”(Nature recognizes that sex and gender are neither binary nor fixed.)”.

Who, exactly, is Nature here? The scientific papers treat sex as a binary, while the editorials make these ludicrous disclaimers.

Well, you know why the editors are doing this. Andy calls it “ideological capture”:

The only explanation for these strange and incorrect statements is ideological capture. These sentences are mantras of gender ideology – an ideology that claims that sex is not a reliable classification for humans. It is too vague, mutable and subjective to talk about reliably. The only reliable classification is ‘gender identity’ – whatever that is. This fashionable nonsense arose out of postmodernist inspired philosophies in ‘gender studies’ and sociology. As with much of these philosophies, it seeks to undermine meaning in words, to break apart and deny objective knowledge and classifications in an attempt to undermine ‘oppressive power structures’. It is a strictly political philosophy with activist aims that denies science can obtain reliable and objective knowledge and any such claim to knowledge is merely the speech of a dominant and oppressive class – usually white, heterosexual men.

But sex is, of course, fundamental to biology. No peer reviewed biology paper would characterise sex (at least in oogamous organisms like us) as not being ‘binary’, not being a material fact, and being mutable (except in sequential hermaphrodites). We cannot understand reproduction except in terms of its strict binary nature based on the fusion of two highly asymmetric haploid gametes. It is startling that Nature feels it needs to deny these things.

But Nature has form. Indeed. an opinion article published in Nature is an ideological favourite and a classic of this pseudoscientific genre.

In 2015, Claire Ainsworth published an article “Sex Redefined – The idea of two sexes is simplistic. Biologists now think there is a wider spectrum than that.” It is an exemplar of the ideological and denialist approach to sex.

I can’t tell you how annoying that I, as an erstwhile researcher in organismal biology, find this. It’s the denial of science to further ideology. And it’s the same madness we saw in the Lysenko episode, in which classical genetics was denied by a Russian charlatan in the service of Soviet ideology. Lysenko’s bogus theory of “vernalization”—really a “blank slate” idea in which inherited changes in crop production were influenced not by genes, but by environmental treatment—resulted in the death of millions by famine, both in Russia and in China, which also adopted Lysenko’s bogus theories.

Nobody is going to die from Nature‘s risible position on sex, but it will have consequences, as Andy notes:

This Nature article did not redefine sex as the title promised, but stripped it of meaning and rendered it entirely subjective.

Once you have done this, then you can dismantle women’s rights, sports and spaces (as sex is not meaningful), reject sexuality (because a person’s sex is not a reliable object of your desire) and dismantle protections and measurements to ensure fairness and representation for women in business and politics.

You also remove the ability for science to understand how your sex might have material and significant impact on your health and medical treatments.

And that is why this ideological capture of Nature is so worrying and depressing.

How can this be stopped? I don’t know if it can, but scientists can certainly speak out against this nonsense. For if it continues, every paper that separates organisms by sex will have to carry caveats. And it can’t just be humans, as sex is no less binary in humans than in other animals, for sex has to do not with how one “identifies”, but with biology. If Nature were true to its own editorial position, there would be no more mention of sex anywhere in the journal without the ridiculous caveats we saw above.

Scientists of the world, unite!

58 thoughts on “The science journal Nature goes woke, claiming that both sex and gender are nonbinary”