A few days ago I reported and criticized an execrable interview on NPR: “In defense of looting,” a summary of Vicky Osterweil’s eponymous book that justified looting as a proper and, in fact, socially positive and equitable response to the inequalities of American society. It was so over the top that many people couldn’t believe it wasn’t a spoof. But it wasn’t. This is how far we’ve come on the Wokeness Express.

Osterweil’s piece has been roundly trounced by others (see, for example, this takedown by Graeme Wood in The Atlantic), and maybe there was sufficient social-media pushback to make NPR think twice. They did try to walk back what they said about the interview. But I’m not that hopeful that this signals a permanent change in their wokeness, for approbation of looting is easily spit out while swallowing the rest of the Social Justice hog.

But at least NPR has had second thoughts. Max Tani, a media reporter for The Daily Beast, emitted this tweet in which NPR’s public editor says that, well, maybe they didn’t put the piece in proper context (the proper context is a wastebasket). I’ve put the NPR editor’s words below to make them easier to read.

Here’s what’s in the tweet and the NPR statement: 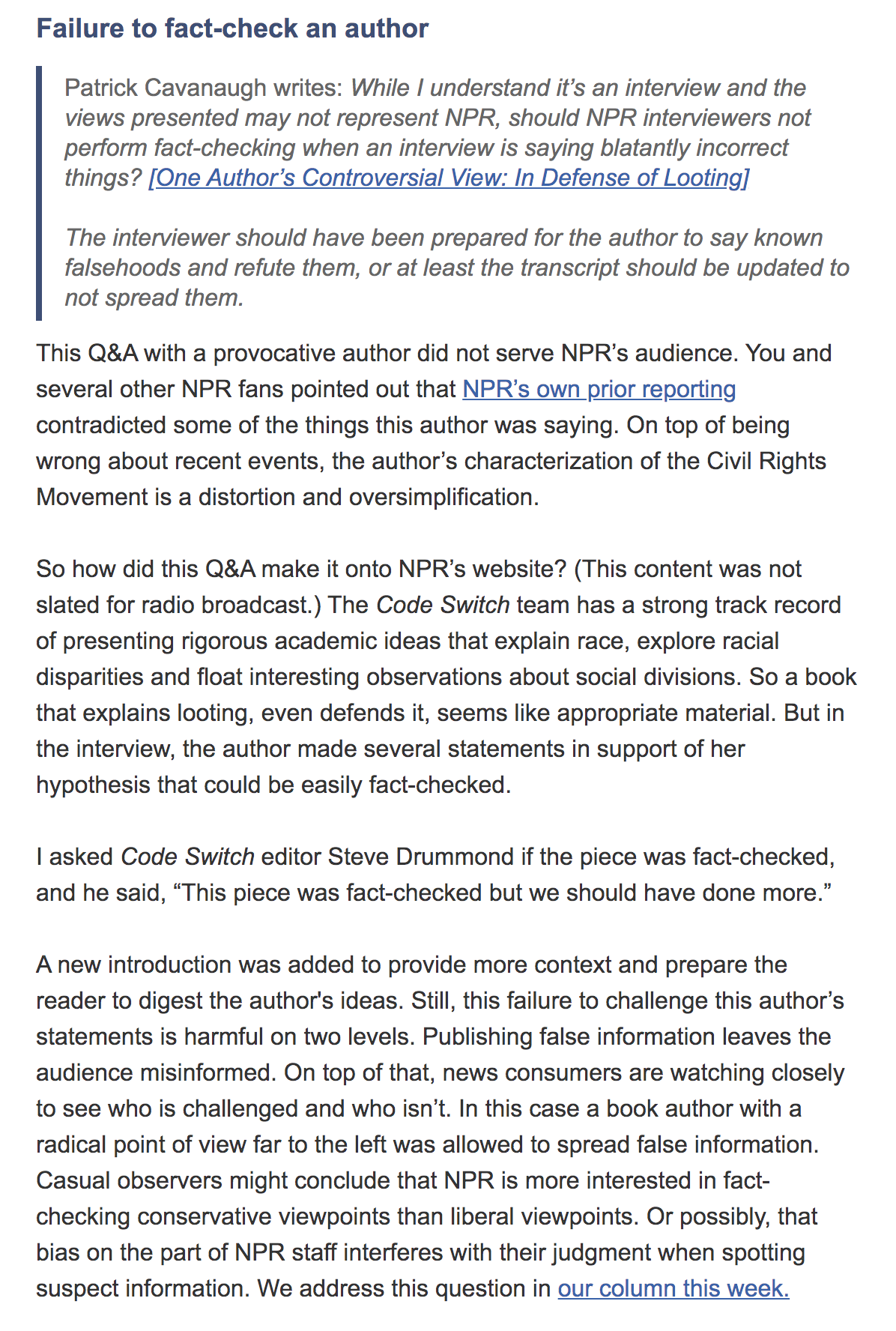 It’s not clear what they’re saying here. If the piece wasn’t properly fact-checked, but it was fact-checked, “but we should have done more”, then which facts needed to be checked or challenged? (If you read the NPR piece, you’ll see that the interviewer’s questions were all softball queries.) Nowhere can you find the “false information” that was promulgated either by the interview or Osterweil.

NPR put a caveat at the head of the interview, but it doesn’t clarify matters much. This is what it says:

This story was updated on Sept. 1, 2020. The original version of this story, which is an interview with an author who holds strong political views and ideas, did not provide readers enough context for them to fully assess some of the controversial opinions discussed.

But, not having the original story, I can’t see what has been changed, and NPR really should tell us. Was it just the introduction? In Osterweil’s answers there are now a few words in brackets, but I don’t know if they were there originally, and, at any rate, I don’t see anything obvious changed in the main interview. I suspect they just tweaked the intro, but they don’t appear to have called out “false information” that was spread by Osterweil.  If readers have the original piece and can compare it to what’s there now, let me know.

The last link in the piece above is to McBride’s NPR public editor column, called “‘Without evidence’ is a new catchphrase at NPR.” It discusses how NPR uses the phrase “without evidence” as a fact-check on statements that are, well, unevidenced. It includes this statement, a criticism of Trump, that appears a bit unfair because some people have indeed maintained that Kyle Rittenhouse, who killed two men in Kenosha and injured one, was acting in self-defense. What I said at the time, as I recall, was that I’m reserving judgment until Rittenhouse’s trial, but you can’t assert there is no “evidence” that the gunman was acting in self-defense. There are some who construe the videos as self defense, and that indeed, regardless of the motives, to them Rittenhouse did at least “appear” to be acting in self defense. Here’s what McBride says at the start of her piece:

When a reporter asked President Donald Trump for his thoughts on the teenager who killed two protesters and injured a third person in Kenosha, Wisc., Trump said, it looked like “self-defense.”

The lead of the NPR story later that day reads that Trump claimed “without evidence, that it appeared the gunman was acting in self-defense.”

The claim is not about a fact but an “appearance”, and you can’t really say that that appearance was without evidence. NPR was gratuitously criticizing Trump. Granted, Trump should have kept his mouth shut about a pending criminal case, but that’s not what NPR is discussing. But we’re here for the Osterweil piece, and McBride’s “apologia” has a very short section on the Code Switch piece about looting; here it is in its entirety. I’ve put their one admission of negligence in bold.

Osterweil’s central thesis: “[Looting] gets people what they need for free immediately, which means that they are capable of living and reproducing their lives without having to rely on jobs or a wage — which, during COVID times, is widely unreliable or, particularly in these communities, is often not available, or it comes at great risk. That’s looting’s most basic tactical power as a political mode of action.”

Code Switch brings the NPR audience provocative research all the time. It’s part of their mission to advance the conversation on race. Osterweil went on to say that looting is insured, that looters target businesses that aren’t rooted in the local community and that the civil rights movement only adopted non-violence to appeal to white northerners. All of those statements deserved pushback.

Code Switch editor Steven Drummond said that the article was fact-checked, but not enough.

“We have updated the intro to this interview to give readers more context,” he wrote in an email. “This notion of looting and the role it plays in the public discourse is a fair target, and we often interview authors who have controversial opinions and viewpoints. We should have challenged them more.”

These three instances reflect how NPR audience members needed more context to reconcile the speech of a news source with the broader truth.

If you look at NPR’s flawed insertion of “without evidence” to Trump’s assessment of the Kenosha shooting and then look at the lack of fact-checking on the interview with the author of the book on looting, a casual observer might see a bias. But add in the David Greene interviews and you see that as a critic, some calibration is required.

It would take more than three examples to declare any trends in who gets fact-checked and who doesn’t. But these examples are a reminder that the audience is noticing. By all means, lean into the politicians and the pundits, and be gentle with the everyday citizens brave enough to open up to the world.

Most of all, NPR listeners need the newsroom to be evenhanded in its vigilance.

This is a pretty lame statement. At the end, they don’t admit they have a bias, merely an attitude that needs “some calibration”. Their one admission of negligence is the statement in bold above. And there is no link to McBride’s explanation in the original interview.

If this is how seriously NPR and McBride take their touting of an egregious article using puffball rather than hard-nosed questions, then there’s no hope for the station.  They have no issue with calling out Trump’s lies and ignorance, but anguish over criticizing someone who promotes looting.

16 thoughts on “NPR walks back “In Defense of Looting””