In July, a group of linguists sent a letter to the Linguistics Society of America (LSA) trying to get Steve Pinker’s status withdrawn as both an LSA distinguished fellow and a designated media expert. I analyzed the letter here and found it totally without merit—just a bunch of tweets that were misinterpreted as racist and misogynistic.

That’s old news, and the LSA of course didn’t do anything to Pinker. Many besides me defended Steve, including his fellow linguists Barbara Partee and John McWhorter, who even cited my “deconstruction” of the risible letter to the LSA:

An organization dedicated to linguistic analysis must punish a leading, brilliant scholar @sapinker because in the wake of George Floyd's murder, his politics aren't sufficiently leftist? Folks, it's time to stand this gospel down. https://t.co/OrkHiLrMJ5

Every fucking line of this is must-reading on the attempt to defenestrate ⁦@sapinker⁩. Decide for yourself about the erudite demons at the gates. https://t.co/H1IlHAmjJS

But now there’s new news: some of the signers of the original letter have written a 35 page paper complaining about people’s and the media’s reactions to the letter—a paper that they’ve submitted to an unspecified academic journal. This link explains their rationale, has a link to a FAQ page, and a link to the pdf of the paper. I can’t embed the link, but this should take you to the paper (click on “pdf”). A screenshot of the title and abstract: 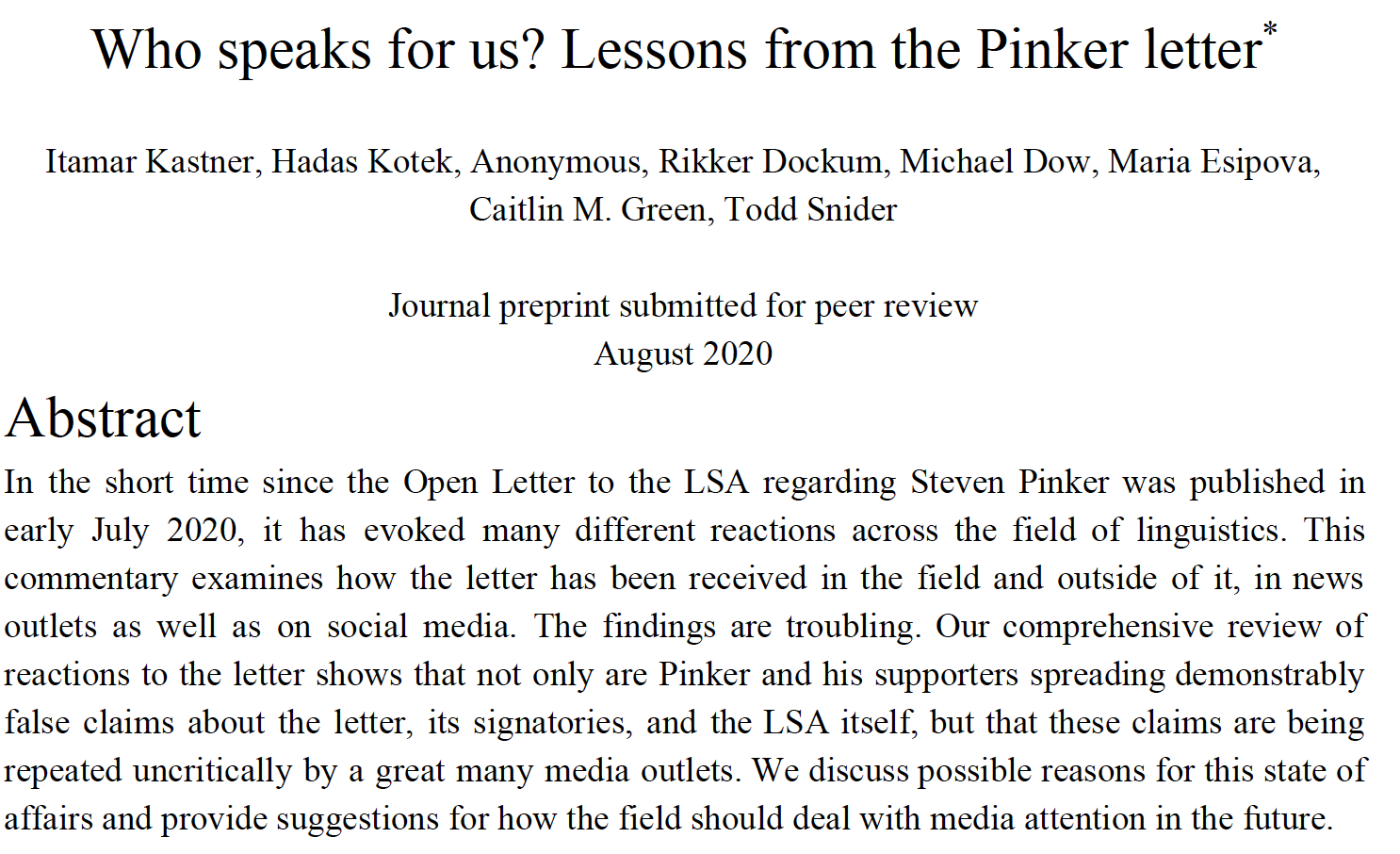 I love the “anonymous” author—someone too scared to put out their name in public. At any rate, the paper beefs about Pinker’s reaction to the original letter, the media’s general taking sides with Pinker, the misconception that the letter was made to “cancel” Pinker (I certainly didn’t say that!), the ad hominem attacks on the letter and its signatories, etc. etc. etc. What the paper does not do is expand on the accusations against Pinker, trying to show that they were just. They can’t, because the accusations were wholly unjust.

The paper is in fact tedious, immature, and obsessed with minutiae: it’s a crybaby paper that simply can’t accept the fact that the original letter was rebuffed, that the LSA didn’t do anything about it, and that the media supposedly distorted its claims. Well, its claims were ludicrous, as is this 35-page attempt to keep the controversy alive.

I don’t know which journal has the unpleasant task of evaluating this screed, but given the quality of journals in the social sciences, I’m sure somebody will publish the paper, if for no other reason than to get clicks. Read it for yourself. I did (quickly), and found nothing buttressing the original claims about Pinker’s supposed bigotry, but much about the hurt feelings of the authors. This isn’t even a tempest in a teapot now—it’s a tempest in a thimble.

61 thoughts on “Authors of anti-Pinker letter, having failed to discredit him, now write a 35-page academic paper claiming that the media and public misunderstood them”