Today’s lovely photos of spiders come from regular Tony Eales of Queensland, and I’ve indented his comments and IDs. Please send in your good wildlife photos, as the tank is getting lower. . .

Spring is in the air and I’m hoping to get out and find some interesting species of peacock jumping spiders this season. However, it has still been pretty cold of late, and I haven’t got out as much as I’d like, so I went through some old photos looking for something interesting to send. I thought I’d feature one of my favourite spider families, the Theridiidae. These are familiar spiders to many, as some species have taken to living in human habitations and are responsible for many of the cobwebs in the corners of houses. Also, the medically significant Black Widow and Australian Red-back Spiders are part of this group.

First up is the Australian Dewdrop Spider, Argyrodes antipodianus. These are kleptoparasites in the webs of other, usually orb-weaving spiders. They are extremely common in the giant webs of Golden Orb-weavers, Trichonephilia plumipes. Pictured here are a male and female T. plumipes. The giant webs of the females are home to a virtual ecosystem of kleptoparasites including the male golden orb-weaver and often several different species of Argyrodes. These scroungers are well tolerated by the large females as they tend to take prey under the size that she is interested in. However they can be a real problem for smaller females or other spiders as they can steal a detrimental amount of food, causing the spider to move her web to get away from them. 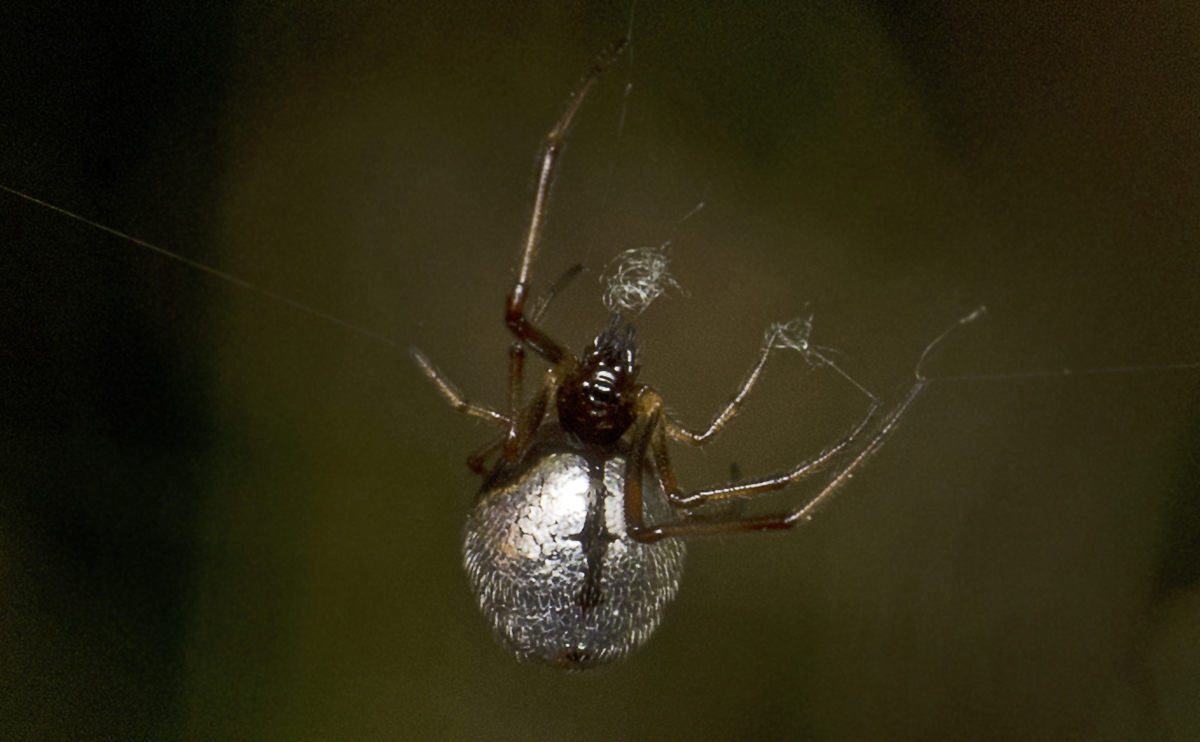 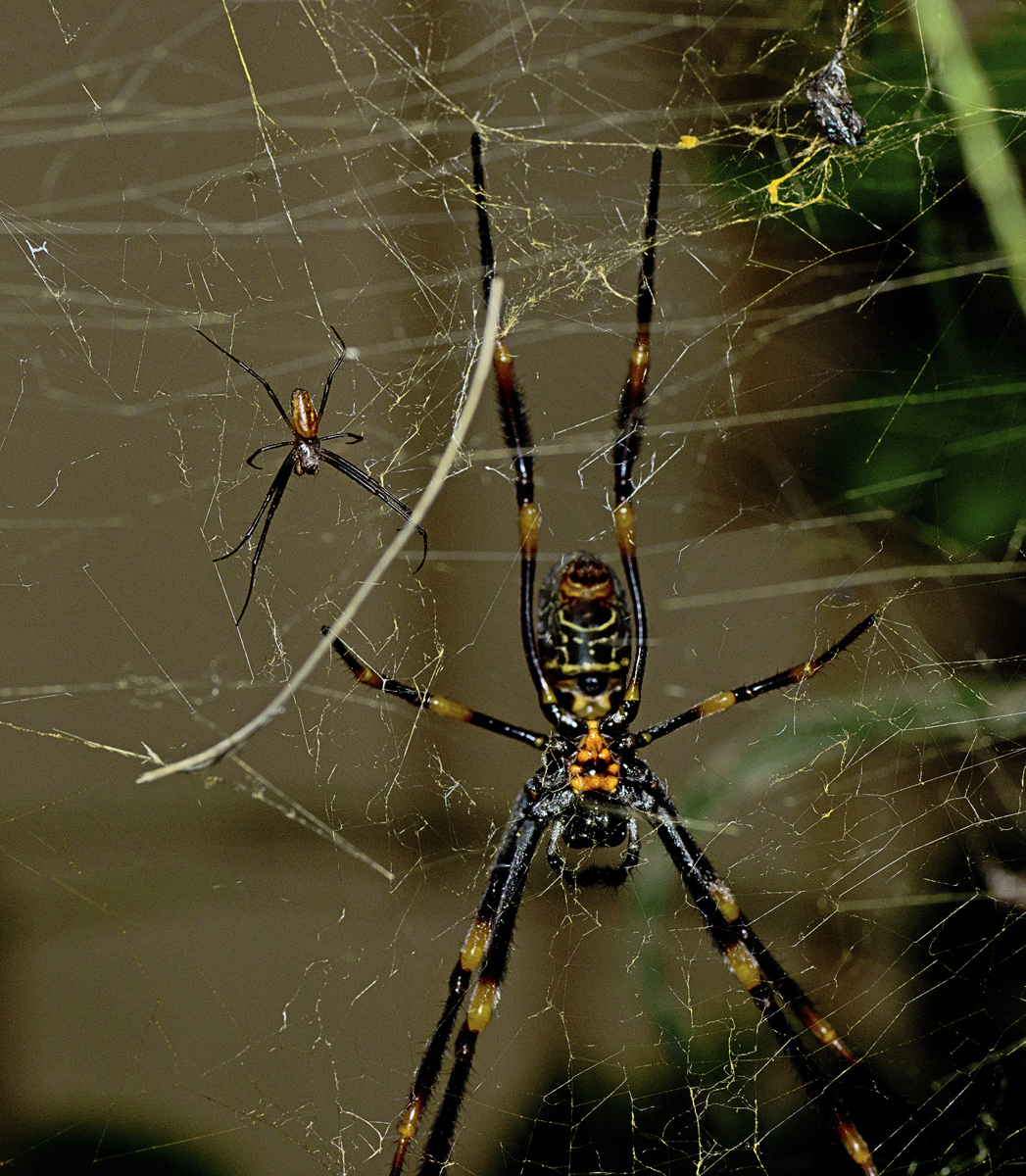 Next is a beautiful undescribed spider, one of a group of small cryptic Theridiids that live under leaves. I am informed that when someone does work on the group, these will likely end up in the genus Chrysso, which currently has no recognised species in Australia but many in east Asia and the American tropics. I really can’t understand how these tiny spiders often have a small clutch of eggs that seem bigger than they could possibly lay. 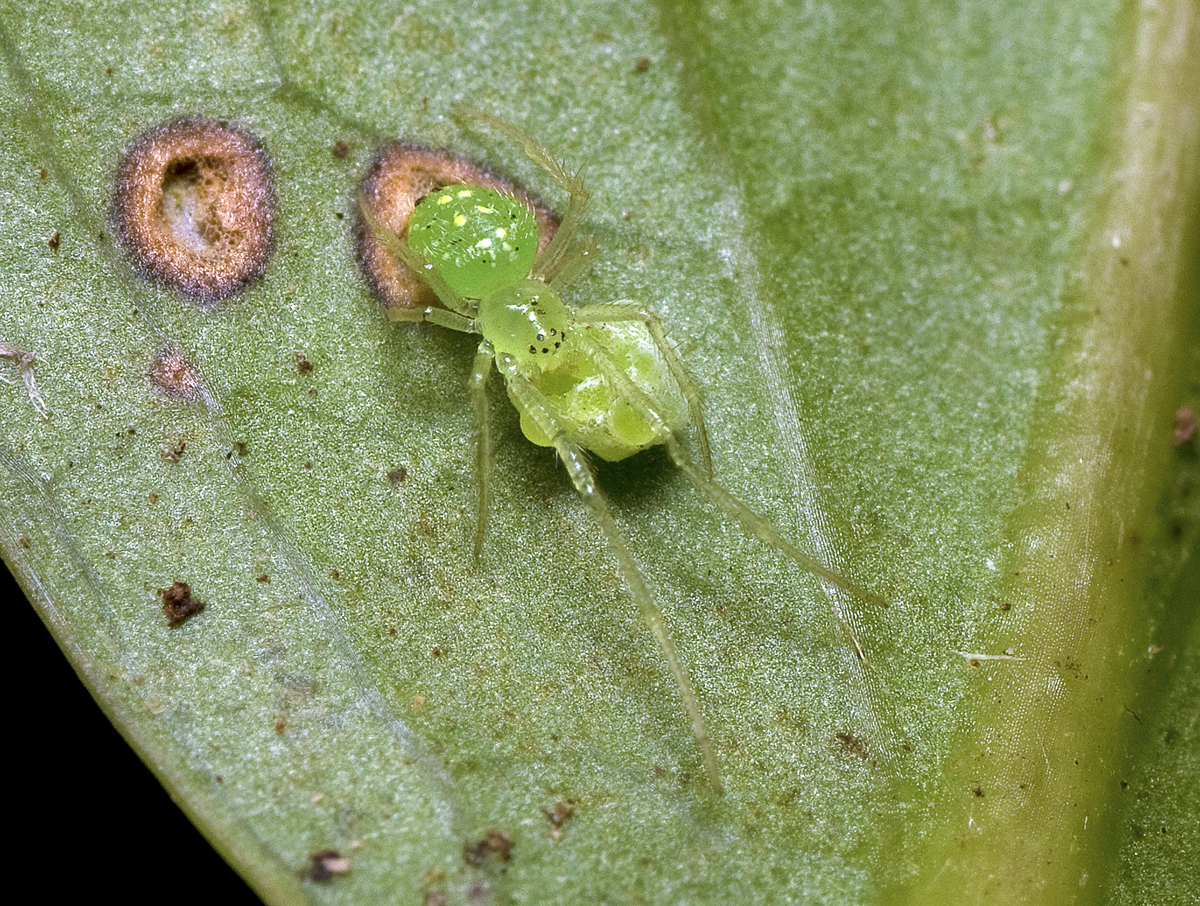 Next are a couple of Euryopis. They genus are specialist ant predators. The first one, E. umbilicata, lives under bark on gum trees and dashes out to ambush passing ants that are constantly going up and down the trunk. The next is an undescribed species that seems to actively hunt out in the open, I often see it on fences and railings. Euryopis are easy to recognise by their small cephalothorax, large abdomen ,and their legs arranged splayed out in a ‘swept-back’ fashion that looks like they are heading into a strong wind. I don’t know what it is about this arrangement, but they are preternaturally fast and able to run down ants which is no small feat. And they are fearless with respect to prey. As the photo shows, this one has caught a large ~12mm Myrmecia nigrocincta (Jumping Jack Ant) which are no shrinking violets as predators themselves. 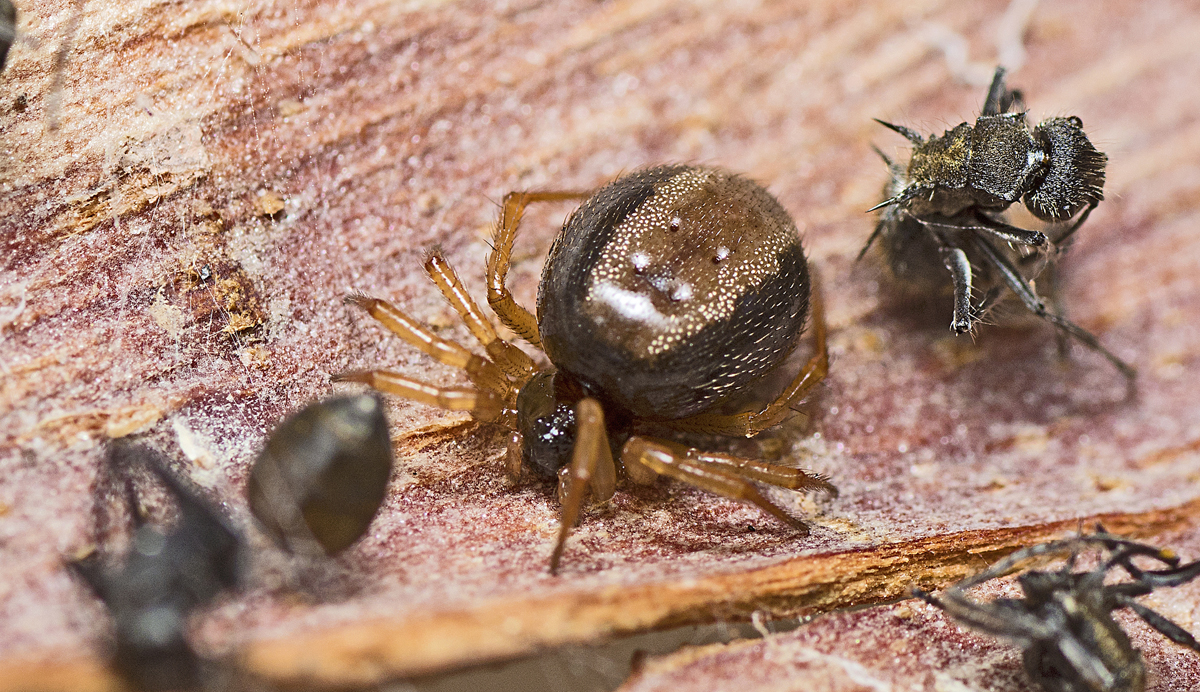 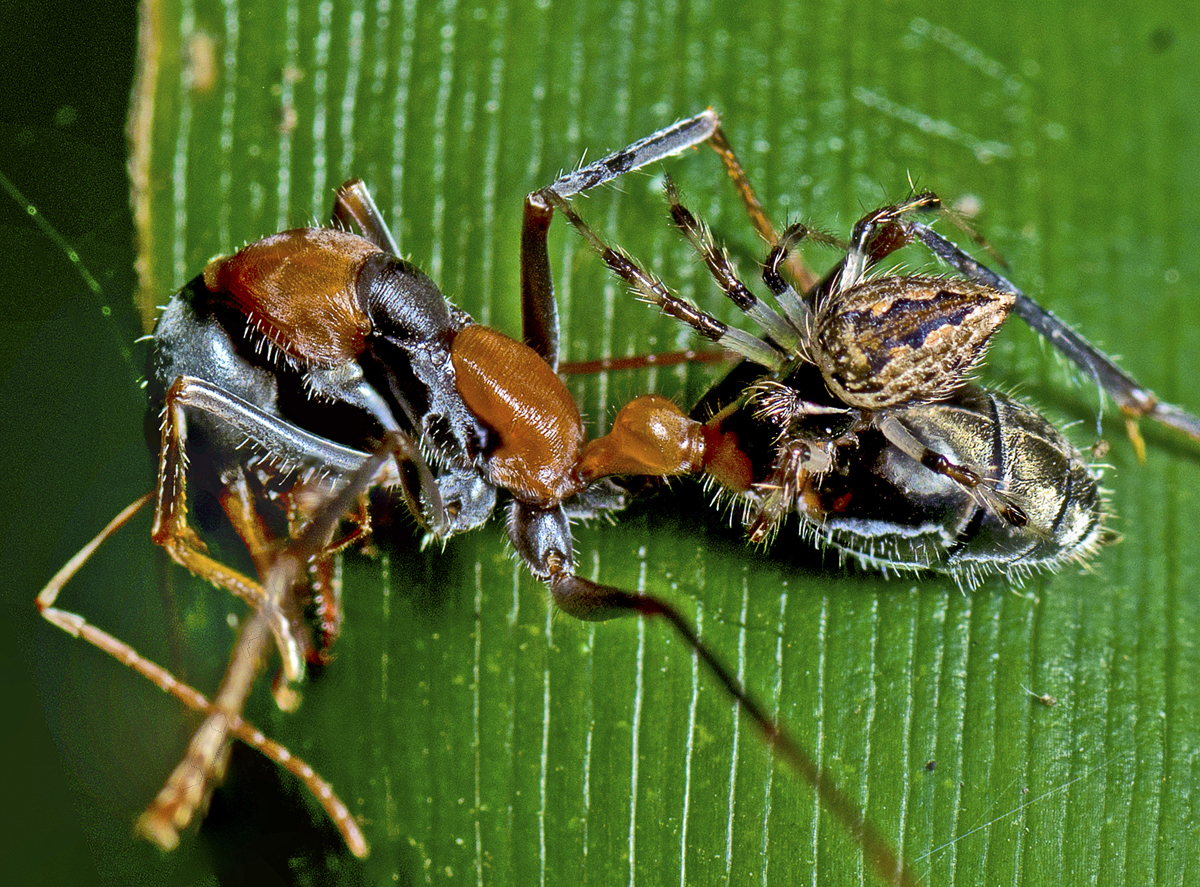 The webs of Theridiids are very complex with threads at all angles, they look messy to us, giving them one common name of Tangle Web Spiders, but they are very efficient traps. They also make fantastic nurseries for the eggs and spiderlings. Here is a photo of a Parasteatoda sp. mum guarding her eggs in the centre of a pile of grass seeds, prey husks and litter to distract any predators away from the her charges. 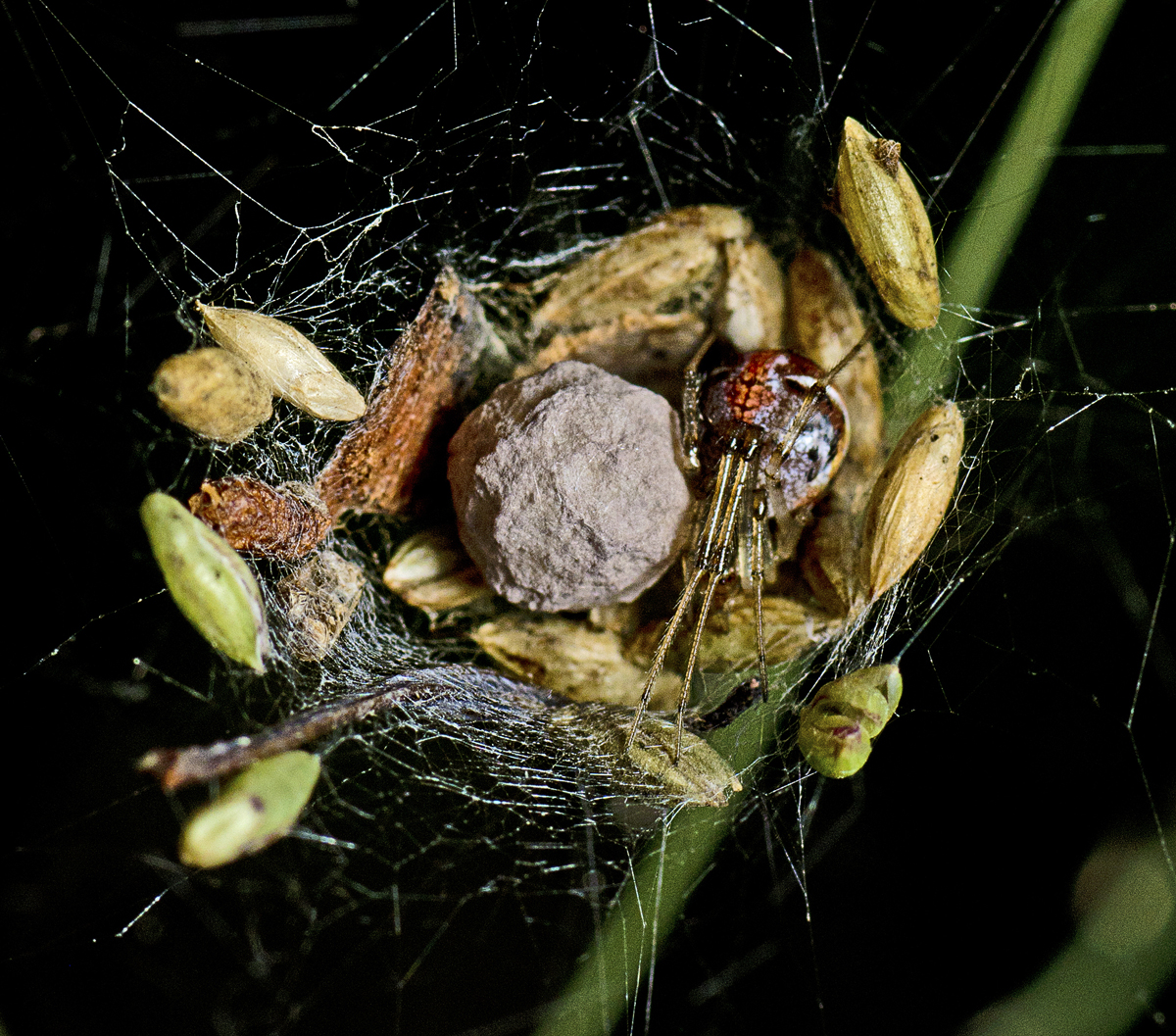 There are a lot of strange tiny Theridiids in all sorts of places that we miss. This sp. was found in leaf litter where a multitude of tiny Theridiids all make their home. The members of this subfamily have these strange enamel-looking patches and sometimes weird humps or turrets from their abdomen. 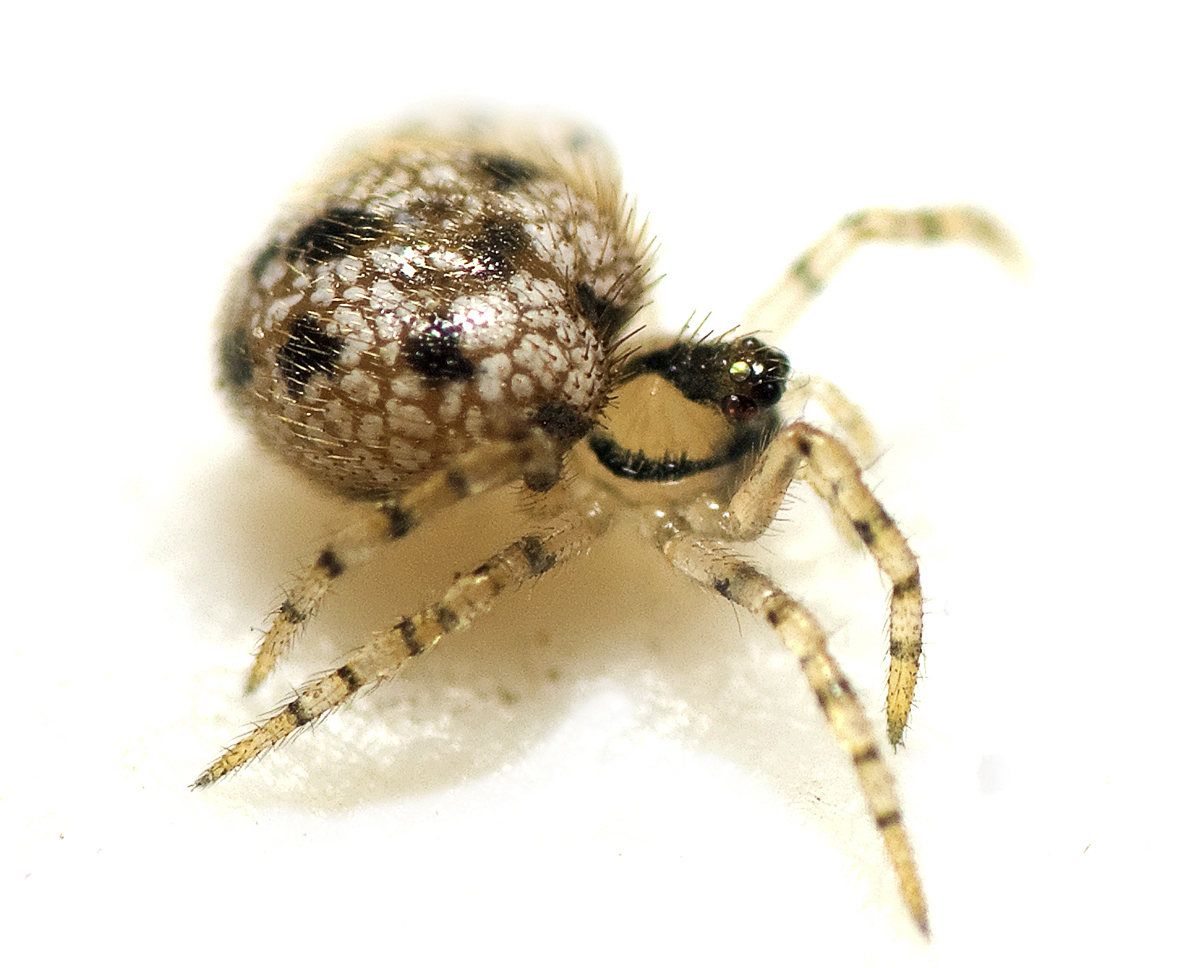 Next is a Steatoda sp., the genus of classic house spiders known commonly as False Widow Spiders. The light patches on the abdomen on this specimen glowed under UV light, which is strange for a spider but common in scorpions. 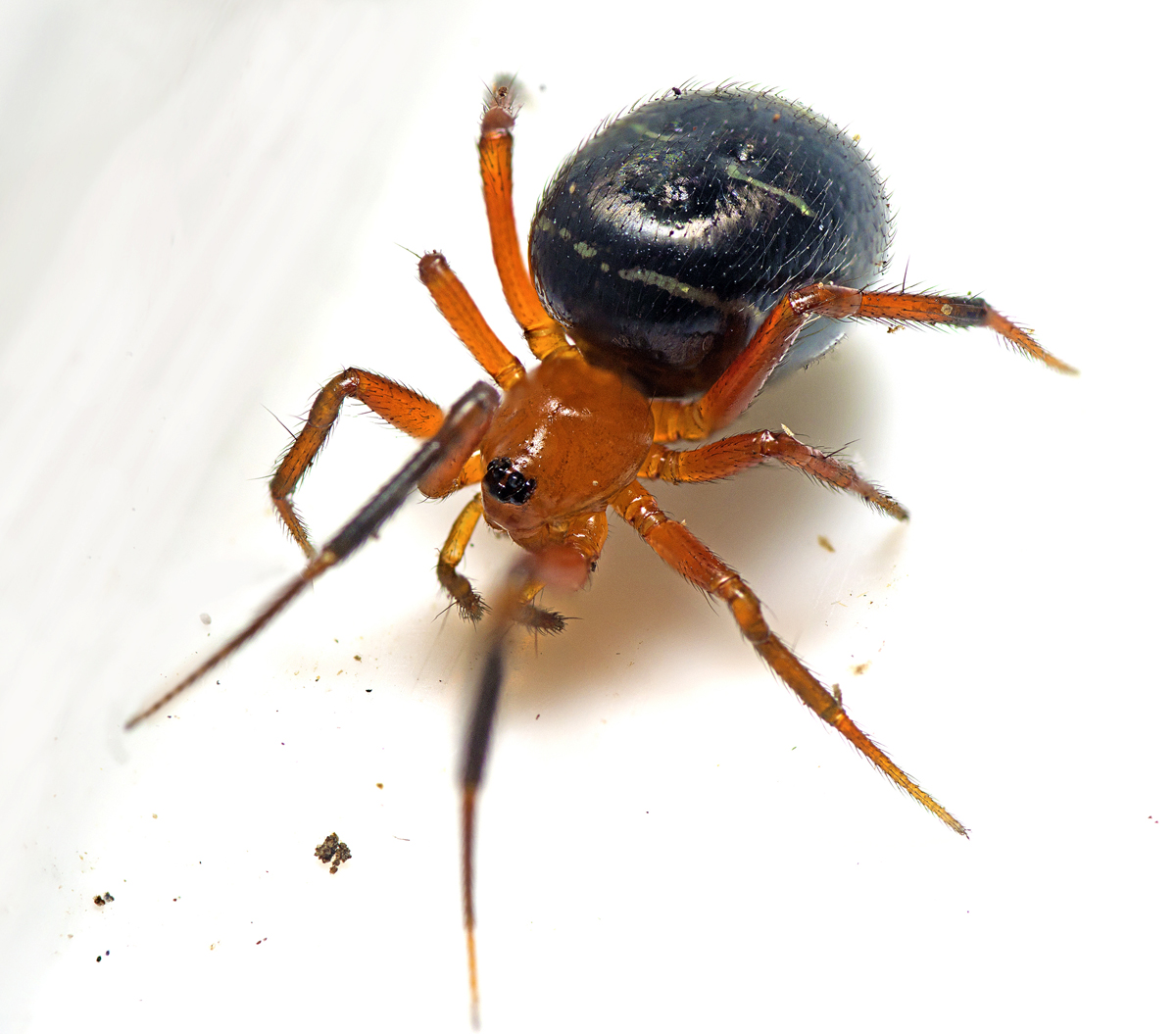 Finally, my favourite of the Theridiids, the Mirror Spider. This is a Black-spotted Mirror-spider Thwaitesia nigronodosa. I’ve sent photos of these before, but they are a difficult spider to photograph well. I think I’m getting better at it, so here’s a more recent shot. The silver in Mirror Spiders and in Argyrodes species comes from deposits of guanine as explained in this article. 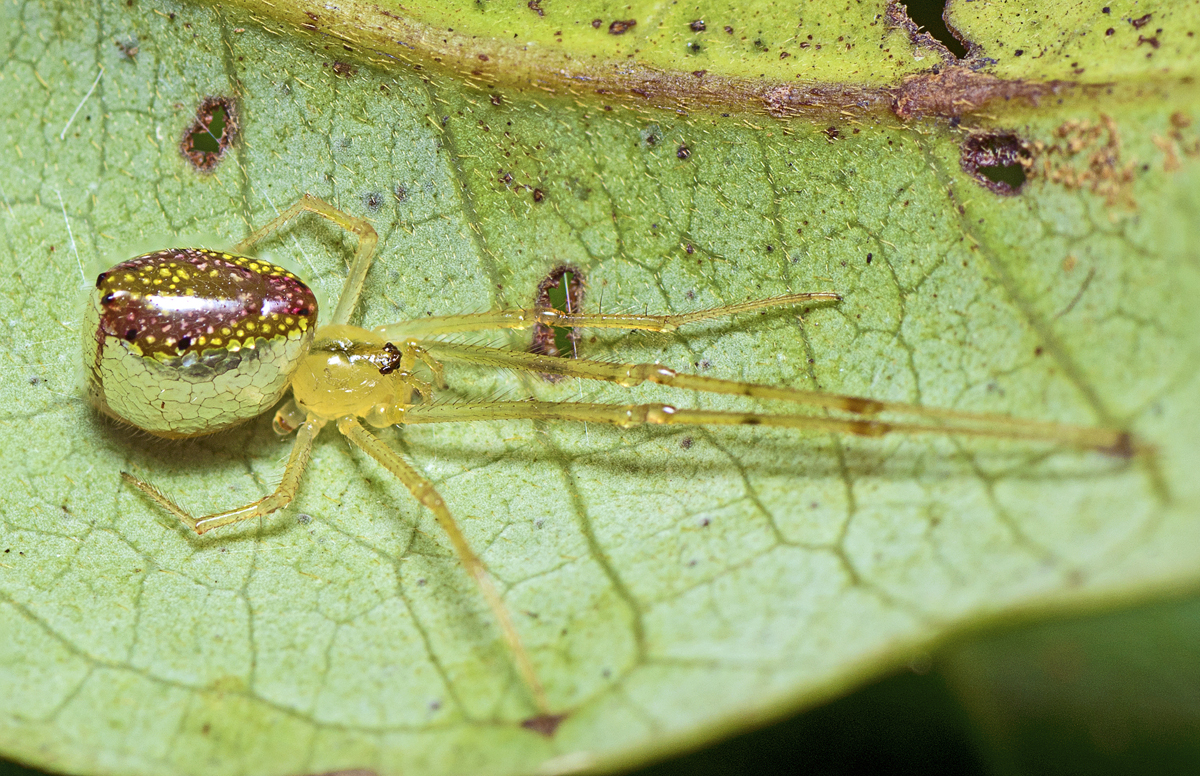