I’ve been thinking a lot lately about the place of identity politics (and, lately, the fight against racism) in science, and had some more thoughts when I read a new article in Quillette by two French scientists. (Click on screenshot.) The title pretty much tells it all: the authors see “racial tribalism” in America—the infusion of Critical Race Theory into science—as an American product, and believe it’s inimical for science organizations and departments to make political statements about race, gender, and the like. I agree in the main, though I think there are at least three exceptions that I discuss below. 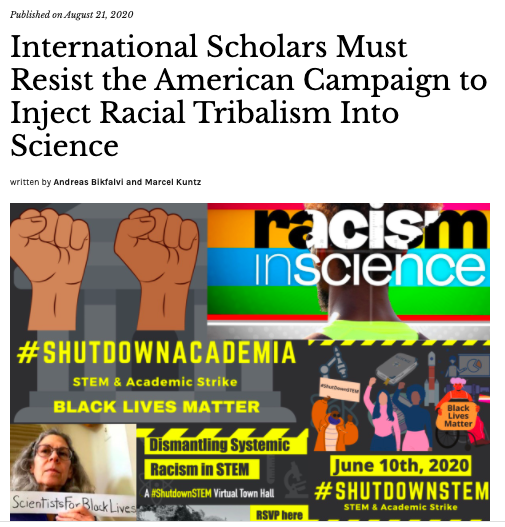 My general view of scientific societies, organizations, and departments, all of whose goals are to promote the teaching of, love of, and doing of science, is that they should adhere to the University of Chicago’s Kalven principles, which I’ve discussed before. That is, such groups should avoid ideological, moral, or political statements as a unit, though individuals should be perfectly free to make statements that express their personal views. The main exception is that when there are forces that threaten the functioning of the university as a scholarly and truth-seeking organization, the University is allowed to take a stand on those forces.

Now this is for universities and (presumably) their constituent units, not scientific societies, but I think the same principles apply: if there are official positions on politics, ideology, and the like, they could act to chill speech in a society or department, impeding free discussion. This is why I think it’s especially important for University departments to avoid making political statements: they are, after all, the constituent units of universities and the locus of where “chilling” of speech could occur. (Departments are where you get your graduate degrees as a student, and tenure and promotion as a professor.) Whether Kalven applies to our own departments in Chicago is not clear, but departments are beginning to issue what to my mind are ideological statements that flout the very reason for our Kalven principles (see here and here, for examples of such statements).

According to authors Bikfalvi and Kuntz, the piece above was submitted to both Science and Nature, which of course rejected it (both journals are becoming quite Woke). It wouldn’t do to express these sentiments in the world’s two most famous science journals, for those journals have no brief to foster discussion on issues like these and, in fact, seem to permit none.

Here is one long and one short quote from the Quillette piece that include examples of what the authors see as the unwarranted infusion of “racial tribalism” into science:

The racialization of discourses, a phenomenon that has spread rapidly to other Western countries from the United States, is increasingly metastasizing into science, technology, engineering, and mathematics (STEM). The process is on display at numerous scientific institutions and journals, including the National Academy of Sciences, the National Academy of Engineering, and the National Academy of Medicine. In Science, chemist Holden Thorp declared that “the evidence of systemic racism in science permeates this nation [i.e., the United States].” In an unsigned editorial, Nature editors pledged to end (unspecified) “anti-Black practices in research.” They also declared that they lead “one of the white institutions that is responsible for bias in research and scholarship,” and that “the enterprise of science has been—and remains—complicit in systemic racism, and it must strive harder to correct those injustices and amplify marginalized voices.”

This is the language of religious confession, not scientific analysis. As scientists ourselves, we feel insulted by such blanket self-denunciations—since we are not racists, have never been racists, and have never met colleagues who, to our knowledge, acted in a racist manner.

This obviously does not mean that there are no racists working in scientific fields. But our experience suggests they are not common or prominent in modern professional communities. We also reject the use of the term “systemic racism,” a term injected by critical race theorists into the discourse, which presupposes the idea that racism is built into the structures of our working environments.

Being objective and testable, science is one of the best tools we have to shed light on the failures of our society. And so it is not only wrong, but counterproductive, to write off the entire edifice of science as rotten with prejudice. If the situation is different in the United States, and there truly are scientific sectors in which racists openly exert control (though no evidence has yet been presented to indicate this [JAC, I know of no area of science rotten in this way]), then American scientists should correct such situations accordingly. But please do not include the rest of the scientific community through broad, unproven, ideologically motivated accusations.

The mission of science is to describe the world as accurately as possible, including in regard to racial discrimination and social issues more generally. But the racialization of discourses is detracting from our ability to perform accurate investigations, as it threatens to turn science into a subset of activism. The Proceedings of the National Academy of Sciences (PNAS) publishes a collection entitled Research in Racial and Social Justice. Few would argue against “justice” of any kind, including social justice. But defining what is and isn’t socially “just” is an inherently political project. How exactly does this accord with the National Academy of Sciences’ stated mission to provide “independent, objective” information “on matters related to science and technology”?

But we retain the belief that, in supposedly pluralistic societies, everyone is entitled to their own opinions. We urge other scientists not to follow the American example, and to resist the campaign to racialize science. While we admire many aspects of American culture, we reject its cultural imperialism—including the new form of ostensibly progressive cultural imperialism that serves to impose America’s own obsessive race tribalism on the rest of the world.

Well, I’m not sure how far American scientists want to impose their views on the world, although one might conclude that since internationally read journals like PNAS and Science push identity-politics views, and journals like Nature have adopted them, Americans are trying to “racialize” international science.

As far as science being racist, I agree with the authors. I’ve seen many claims that science is marinated in “systemic racism,” but I’ve not seen such racism, nor have other colleagues I’ve spoken to. Universities and departments are in fact desperate to increase their diversity, both among students and faculties. The “systemic” part of racism—the idea that “racism is built into institutional structure”—is simply not true of science. Yes, as the authors note, there could be individual racists in science, but I’ve never met more than a very few in a long career. (You might counterargue that they’d keep racism to themselves or have unconscious “implicit bias”.) The eagerness with which science departments (like most University departments) are trying to increase diversity doesn’t jibe with the idea of structurally racist science—a view that’s bandied about with no evidence. And insofar as one can adduce evidence, well, we must address it, for everyone should have an equal shot at doing science.

What, then, should be the policy of science departments and organizations with respect to identity politics in general and racism in particular? A while back I put forth two principles:

In my opinion, scientific societies shouldn’t issue political or ideological statements except under two conditions:

1.) The government is trying to gut science or has other policies that would impede our understanding of nature or the functioning of the scientific society. (This includes, I suppose, policies that wreck the environment when organismal biology is concerned, for without an environment and its species there’s nothing to study.)

I’ve tweaked and expanded these a bit, so here are the new Coyne Principles:

1.) All organizations can and should emphasize that they are against any discrimination on the grounds of gender, race, or other personal characteristics. This is simply a statement that everyone should get an equal opportunity at being hired, accepted as a student, publish papers, get chosen as a Fellow, or so on. This is allowable under the Kalven principles because it’s an essential part of functioning as a university department or professional society.

2.) Scientific societies and university departments may make statements about issues that affect the working of those societies and departments. Again, this is allowable under the Kalven Principles. So, for example, if our government wants to prohibit, say, Chinese scientists from publishing scientific papers in journals (Trump could try something like this), it is entirely fit—and, indeed, imperative—that societies and departments speak out about this as units, for it affects the international character of science that makes it so important and allows it to function so efficiently.

3.) Scientific societies (not so much University departments, though) may make statements about factual issues being distorted in public discourse and have an effect on social/governmental policy. So, for example, if someone argues that stem-cell research has no potential, it might be useful to issue a statement of the advances that have come from such research. Given the evidence for anthropogenic global warming, societies of climatologists and geophysicists might underline the evidence that human-caused climate change is true.

This is a tricky one, because one must do this without making untestable political statements of opinion, and the science backing your statement has to be so strong that nearly all members of an organization would agree on the facts, so that the organization can speak as a whole for its members. I believe this is true for climate change. An example of where it’s not true is a statement of the organization of which I was once president, the Society for the Study of Evolution, which issued a statement that “sex should be viewed as a continuum.” This is certainly not something that most members of the SSE would agree on, and I would claim it’s palpably false. Even if a majority vote of members shows that more than half would endorse such a statement, that still means that the Society is espousing a view that is controversial and certainly not supported by science. (That statement was of course issued to support an ideological view.)

Again, there’s a fine line here. Should the American Association for the Advancement of Science endorse the truth of evolution and decry creationism as religiously-based pseudoscience that shouldn’t be taught? I think the overwhelming majority of AAAS members would agree, and this is an issue of the public understanding of science and proper teaching of science in schools. So I’d have not issue with this. But, for example the SSE shouldn’t be sending amicus briefs to court cases which adjudicate whether trans women should compete in women’s sports because “sex is a continuum”.

Finally, there’s always room for improvement. If bias does creep into science in ways we didn’t know about, call it to people’s attention so they can fix it.

What scientific societies and science department should not do is declare that science is deeply imbued with structural racism and that we must engage in anti-racist activities X, Y and Z (this is encouraging political action, which is not the brief of these units). Nor should we imply that scientists are fostering eugenic practices, as that’s simply untrue. It’s not unseemly to recognize that scientific organizations at one time supported both racist and sexist views, but those days are no longer. It does no good to flagellate ourselves for past missteps and imply that those missteps still taint us.  But, as I noted above, it’s fine to encourage individual scientists to speak for themselves—that’s both freedom of speech and academic freedom. Individual opinions do not impede discussion or chill speech in the same way as “official” statements from scientific societies, journals, and science departments in universities.

Feel free to weigh in, criticize, or supplement the Coyne Principles.

28 thoughts on “The incursion of identity politics into science”