The good news is that my 20 year old car, with only 73,000 miles on it, passed the emissions test with flying colors. Back to business:

This week’s Jesus and Mo strip (soon to be banned in Pakistan) came with a frustrated note:

Phew. Nearly didn’t make it this week. The new WordPress update completely wrecked the site and I had to perform emergency surgery. It was a close thing. I may have to make some fundamental changes around here. Has anyone had any experience with ClassicPress?

Well, I don’t know about ClassicPress but I do use WordPress Classic and every once in a while it changes without telling us. Not good business!

At any rate, this week’s strip is called “norm”. And although puberty can begin before 9 in girls, we have no idea if Aisha had attained this “norm” when the Prophet bedded her. (According to the hadith, Aisha married Mo when she was six.) And of course the whitewashing of the Prophet’s having sex with a nine year old has been going on for a while (see this pathetic piece in the Guardian for an example). 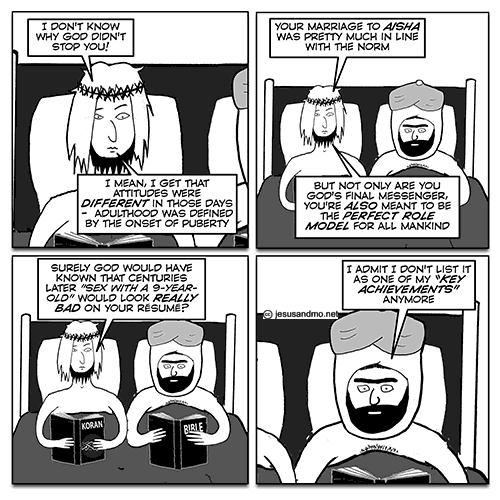