Robin DiAngelo’s book White Fragility has enjoyed a tremendous resurgence of popularity since George Floyd’s murder. It’s appearing on many college reading lists, and is even a recommended resource of the Society for the Study of Evolution, which has now gone uber woke and has a full page of resources that will teach the guilt-ridden evolutionist “how to be an anti-racist”, including a list of places where you can give money. (Why a society dedicated to promoting the study of evolution needs such a page is beyond me.)

I suppose that, given its popularity, I need to read DiAngelo’s book. Not willing to pay for it, I see that it’s online at my University library, and I suppose I will essay it. But I’m looking forward to it about as much as I looked forward to my hernia operation. That is, I know it’s necessary but also that it will be painful.

This, at least, is my preliminary conclusion from having read two negative reviews of the book by people I respect. One is John McWhorter, whose Atlantic review is here (I discussed it in a recent post.) The other is Godless Spellchecker (Stephen Knight), who has a review on his own website. Click the screenshot below to read it. 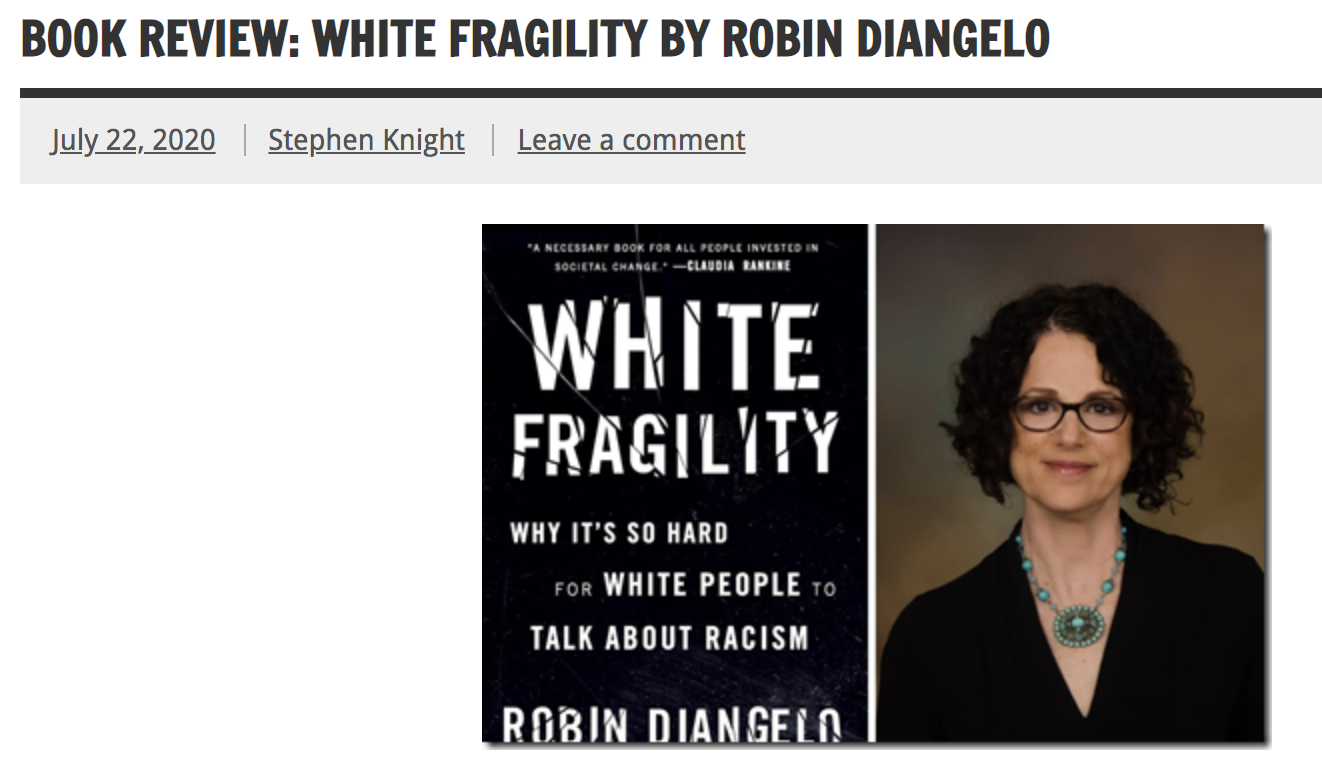 It turns out that Knight and McWhorter come to pretty much identical conclusions, even both comparing DiAngelo’s form of anti-racism to a religion. I’ll put Knight’s quotes in indented Roman type, and McWhorter’s in italics.

I make a habit of reading books and articles that I expect to find disagreeable. This serves to test my convictions as I bounce them off opposing views and discover whether or not they survive the collisions. Moreover, the willingness to seek out alternate views invariably teaches you something that you did not know. In fact, sometimes you actually learn that your understanding of the issue was completely wrong altogether.

The fact that Robin DiAngelo’s ‘White Fragility’ did not manage to be informative or useful on any level is an achievement in and of itself. I’ve never encountered a book so intellectually vapid as to make me worry that reading it may have actually subtracted some knowledge.

DiAngelo has convinced university administrators, corporate human-resources offices, and no small part of the reading public that white Americans must embark on a self-critical project of looking inward to examine and work against racist biases that many have barely known they had.

I am not convinced. Rather, I have learned that one of America’s favorite advice books of the moment is actually a racist tract. Despite the sincere intentions of its author, the book diminishes Black people in the name of dignifying us. This is unintentional, of course, like the racism DiAngelo sees in all whites. Still, the book is pernicious because of the authority that its author has been granted over the way innocent readers think.

We are told that ‘a positive white identity is an impossible goal. White identity is inherently racist. White people do not exist outside of the system of white supremacy’.

That is a pretty strong charge to make against people who, according to DiAngelo, don’t even conceive of their own whiteness. But if you are white, make no mistake: You will never succeed in the “work” she demands of you. It is lifelong, and you will die a racist just as you will die a sinner.

DiAngelo’s doctrine is akin to a religion:

There are many ways in which her arguments mimic the structure of fundamental religion. The book is awash with unfalsifiable claims and contains a plethora of conflicting dogmas and injunctions that are impossible to satisfy. The author leans heavily on the idea that you are born sick—sorry, ‘privileged’—and must seek to absolve your sins—sorry, ‘whiteness’—for as long as you walk the earth. Also, if you disagree with the tenets of this scripture, that is in itself evidence that the devil—sorry , ‘white fragility’—is working through you.

. . . Also, no religion would be complete without its martyrs. A role which DiAngelo also steps up to. ‘Because I am seen as somewhat more racially aware than other whites, people of colour will often give me a pass’ she writes. She momentarily reveals how virtuous she is compared to us mere troglowhites, before heroically declaring how she refuses to let her own woke brilliance go to her head. She informs us that this sort of ‘black acceptance’ only serves to ‘stunt her path of racial growth’ apparently and therefore the black individual praising her is actually guilty of colluding with her racism.

That is a pretty strong charge to make against people who, according to DiAngelo, don’t even conceive of their own whiteness. But if you are white, make no mistake: You will never succeed in the “work” she demands of you. It is lifelong, and you will die a racist just as you will die a sinner.

She operates from the now-familiar concern with white privilege, aware of the unintentional racism ever lurking inside of her that was inculcated from birth by the white supremacy on which America was founded. To atone for this original sin, she is devoted to endlessly exploring, acknowledging, and seeking to undo whites’ “complicity with and investment in” racism. To DiAngelo, any failure to do this “work,” as adherents of this paradigm often put it, renders one racist. [See also McWhorter’s “sinner” comment above and “prayer book” and “cult” comments below.]

DiAngelo’s schema is a watertight edifice that can’t be refuted:

And if you find it somewhat irksome to be accused of white supremacy (as any non-racist would), that too is evidence of your ‘white fragility’. Checkmate, said the pigeon.

She operates from the now-familiar concern with white privilege, aware of the unintentional racism ever lurking inside of her that was inculcated from birth by the white supremacy on which America was founded. To atone for this original sin, she is devoted to endlessly exploring, acknowledging, and seeking to undo whites’ “complicity with and investment in” racism. To DiAngelo, any failure to do this “work,” as adherents of this paradigm often put it, renders one racist.

Diangelo also writes as if certain shibboleths of the Black left—for instance, that all disparities between white and Black people are due to racism of some kind—represent the incontestable truth. This ideological bias is hardly unique to DiAngelo, and a reader could look past it, along with the other lapses in argumentation I have noted, if she offered some kind of higher wisdom. The problem is that White Fragility is the prayer book for what can only be described as a cult.

. . . If you object to any of the “feedback” that DiAngelo offers you about your racism, you are engaging in a type of bullying “whose function is to obscure racism, protect white dominance, and regain white equilibrium.”

DiAngelo has no workable solutions for racism:

But the tragedy of all this is that ‘White Fragility’ is nothing more than a pseudo-intellectual misdirection masquerading as compassionate activism. In reality, this performative, humble-bragging white guilt will do nothing to help alleviate inequality or improve the material needs of black people. It’s a lazy way for white racists to alleviate their guilty consciences and continue to avoid doing anything useful for the the people they claim to care about—except for treating them like children. Just so long as you are willing to admit how awful and privileged you are (I.e. talk about yourself incessantly), then you don’t have to talk about the real issues facing black communities or think too hard about a complicated issue and its difficult questions.

And herein is the real problem with White Fragility. DiAngelo does not see fit to address why all of this agonizing soul-searching is necessary to forging change in society. One might ask just how a people can be poised for making change when they have been taught that pretty much anything they say or think is racist and thus antithetical to the good. What end does all this self-mortification serve? Impatient with such questions, DiAngelo insists that “wanting to jump over the hard, personal work and get to ‘solutions’” is a “foundation of white fragility.” In other words, for DiAngelo, the whole point is the suffering.

DiAngelo’s book is itself racist:

Throughout this book I was also taken aback with how often the author reveals how little she thinks of black people in general. She doesn’t consider black people in terms of the individual. In fact, she doesn’t accept the notion of ‘the individual’ at all, warning that individualism is a harmful ‘white’ idea proposed to avoid acknowledging the unique evils of ‘whiteness’. The entire book reads as though a white supremacist feels guilt for their prejudices, and confesses in the hope that we will be inspired to do the same, seemingly unaware that normal people do not think about black people and their own skin colour the way she does.

For example, the author argues that a desire to have discussions in a ‘respectful environment’ of ‘non-conflict’ is a very white-centric notion of what it means to be ‘respectful’. Therefore imposing these ‘white’ norms of civility creates a ‘hostile environment’ for non-white people. This is what the racism of low expectation looks like. She goes on to say that ‘feedback on white racism is difficult to give [and] how I am given the feedback is not as relevant as the feedback itself’.

Of course something can be true whether it is argued in a logical and calm manner or whether it is screamed in your face whilst you are trying to eat your lunch. However, the idea that the former approach comes more naturally to white people frames black people as belligerent infants, incapable of attaining the white gold standard of rationality and civility. It’s as offensive as it is infantilising. This is a wall of white supremacy glossed over with a thick coat of guilt.

White Fragility is, in the end, a book about how to make certain educated white readers feel better about themselves. DiAngelo’s outlook rests upon a depiction of Black people as endlessly delicate poster children within this self-gratifying fantasy about how white America needs to think—or, better, stop thinking. Her answer to white fragility, in other words, entails an elaborate and pitilessly dehumanizing condescension toward Black people. The sad truth is that anyone falling under the sway of this blinkered, self-satisfied, punitive stunt of a primer has been taught, by a well-intentioned but tragically misguided pastor, how to be racist in a whole new way.

Now I’m not at all implying that the authors have copied each other; rather, I see this as two keen minds (one in a black body, the other in a white) coming up with similar conclusions. I expect I’ll have my own conclusions after I read the book, but the odds are that I’ll agree with both McWhorter and Knight.

If you’ve already read the book, do weigh in below.