I almost never read the Wall Street Journal, mainly because it’s behind a paywall and I don’t want to fork out the dosh. Also, I believe it’s mostly about finance, which doesn’t interest me. However, Malgorzata, knowing of my dislike of the new New York Times, sent me this link and a transcript, which I put below. Note that is is by “The Editorial Board.” 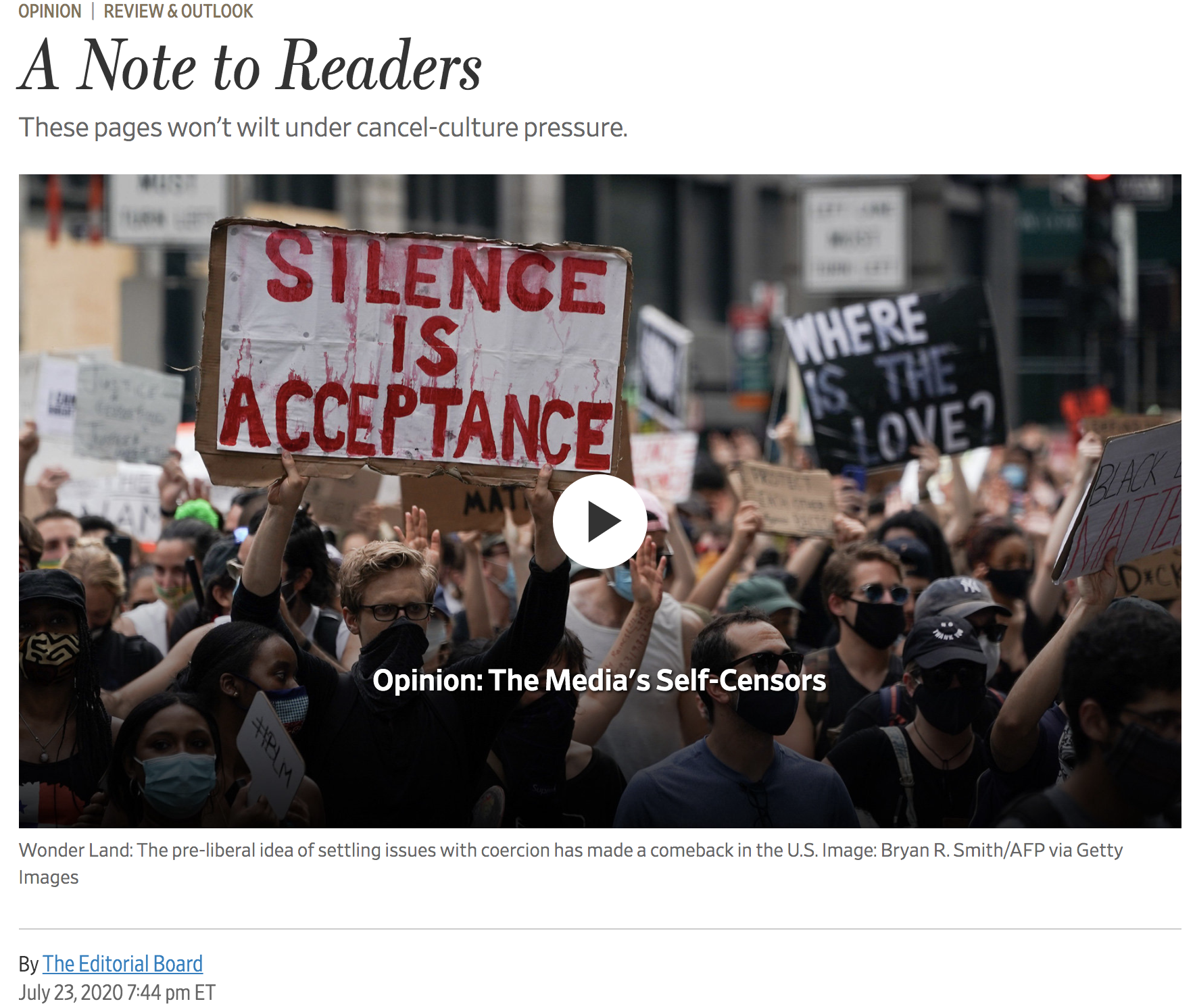 Here (I don’t know bupkes about the letter from the WSJ employees), but perhaps some reader can put a link in the comments.

THE WALL STREET JOURNAL: “WE ARE NOT THE NEW YORK TIMES”

A Note to Readers
These pages won’t wilt under cancel-culture pressure.
By The Editorial Board
Wall Street Journal
July 24, 2020

We’ve been gratified this week by the outpouring of support from readers after some 280 of our Wall Street Journal colleagues signed (and someone leaked) a letter to our publisher criticizing the opinion pages. But the support has often been mixed with concern that perhaps the letter will cause us to change our principles and content. On that point, reassurance is in order.

In the spirit of collegiality, we won’t respond in kind to the letter signers. Their anxieties aren’t our responsibility in any case. The signers report to the News editors or other parts of the business, and the News and Opinion departments operate with separate staffs and editors. Both report to Publisher Almar Latour. This separation allows us to pursue stories and inform readers with independent judgment.

It was probably inevitable that the wave of progressive cancel culture would arrive at the Journal, as it has at nearly every other cultural, business, academic and journalistic institution. But we are not the New York Times. Most Journal reporters attempt to cover the news fairly and down the middle, and our opinion pages offer an alternative to the uniform progressive views that dominate nearly all of today’s media.

As long as our proprietors allow us the privilege to do so, the opinion pages will continue to publish contributors who speak their minds within the tradition of vigorous, reasoned discourse. And these columns will continue to promote the principles of free people and free markets, which are more important than ever in what is a culture of growing progressive conformity and intolerance.

The piece refers indirectly to the NYT‘s adding caveats to Tom Cotton’s op-ed after the paper’s employees objected en masse, saying that the op-ed made employees of color feel “unsafe.” That, of course, was a palpably ridiculous claim, though nobody dares say that. Although I’m not in general aligned with the views of the conservative Wall Street Journal, I have to say that here they showed some spine, and in so doing “dragged” (as the kids say) the Paper of Record.