It’s been a while since we’ve discussed either scientism or “ways of knowing” on this site (the two ideas are connected). I’ll reiterate my views very briefly. “Scientism” has two meanings, as Maarten Boudry notes in his piece below, but the most common non-pejorative meaning is that of science making claims outside of its ambit, something that almost never happens these days.

I’m more interested in the idea whether there are “ways of knowing” beyond those involving science or “science broadly construed” (“SBC”, i.e., any profession, including plumbing and car mechanics, that uses the empirical method and relies on hypotheses, tests, and confirmation as ways of understanding the cosmos). As far as I can see—and I’ve asked readers about this—I’ve found no way beyond SBC to ascertain what’s true about our universe.

The most common area to claim that there are ways of knowing beyond the empirical is of course religion, but theology has never found a single ascertainable truth about the Universe that hasn’t been confirmed (or disconfirmed, as in the Exodus) by empirical research. You can’t find out what’s true about the Universe by reading scripture or waiting for a revelation. Even “scientific revelations” like Kekulé’s dream of a snake biting its own tail, which supposedly gave rise to the ring structure of benzene with alternative single and double bonds, had to be confirmed empirically.

Maarten Boudy has a new blog piece that discusses these ideas, but also highlights a new paper that, he says, puts paid to the notion that there are ways of knowing beyond science. Click on the screenshot to read it. (His piece has a good Jewish title though Boudry is a goy.) As you can see from the title, Maarten tells it as it is:

Boudry, by the way, is co-author of this collection of essays, which, though mixed in quality, is generally good and gives a good overview of the “scientism” controversy. (Click screenshot for Amazon link.) The co-author, Massimo Pigliucci, absolutely despises my including stuff like plumbing in “science construed broadly,” and has said so many times. Massimo is deeply preoccupied with demarcating “science” from “nonscience,” and sees me as having messed up that distinction. 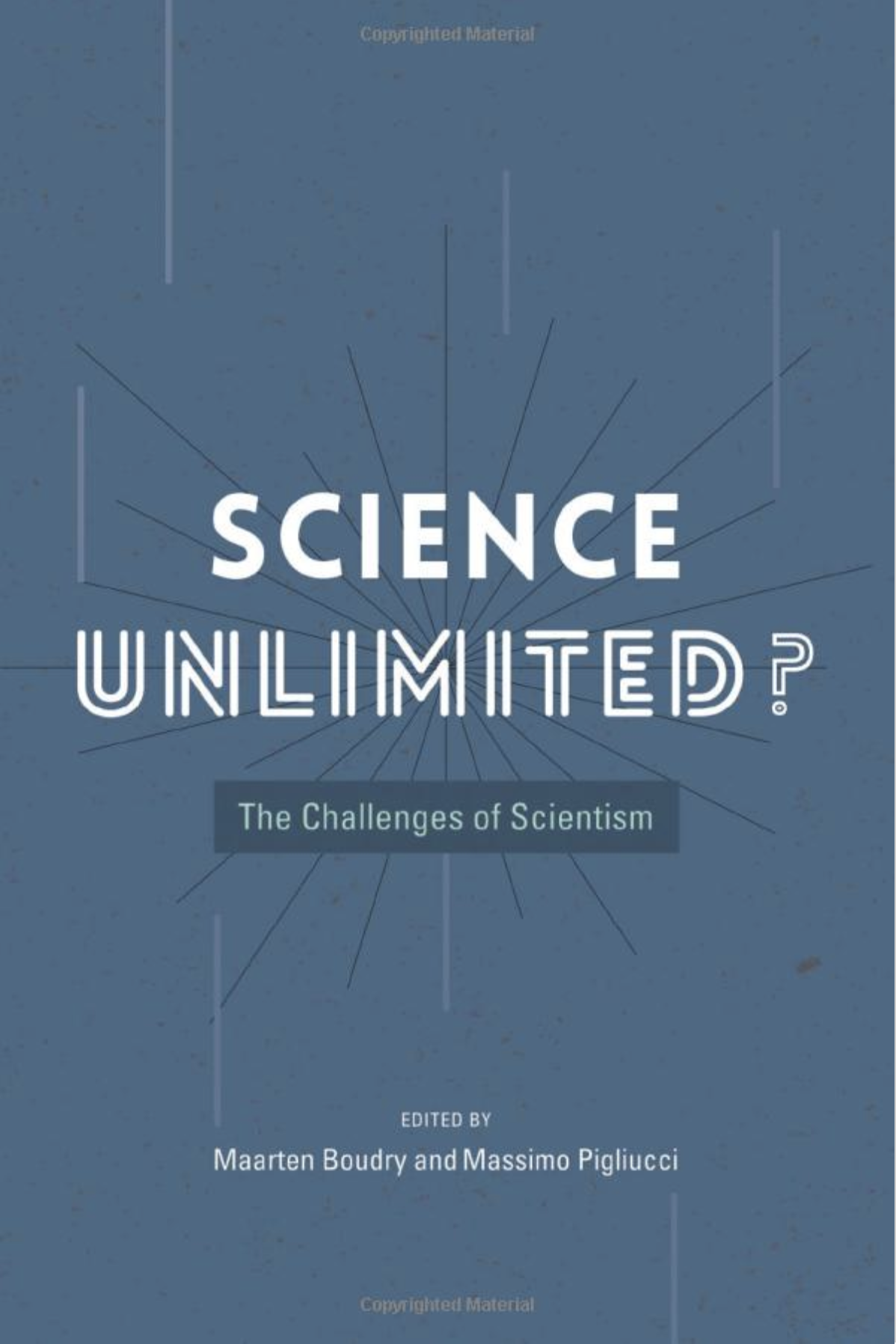 Here’s Maarten’s link to the new paper and a useful classification of four flavors of scientism:

Now yesterday I read a clever new paper in Metaphilosophy – yes, there really is a journal by that name – in defense of scientism, which follows the second strategy. The Finnish authors, known as the Helsinki Circle, present a neutral definition of “scientism”, distinguishing between four different flavors represented by the quadrant below. The four positions follow from two simple choices: either you adopt a narrow or a broad definition of science, and either you believe that science is the only valid source of knowledge or that it is simply the best one available. 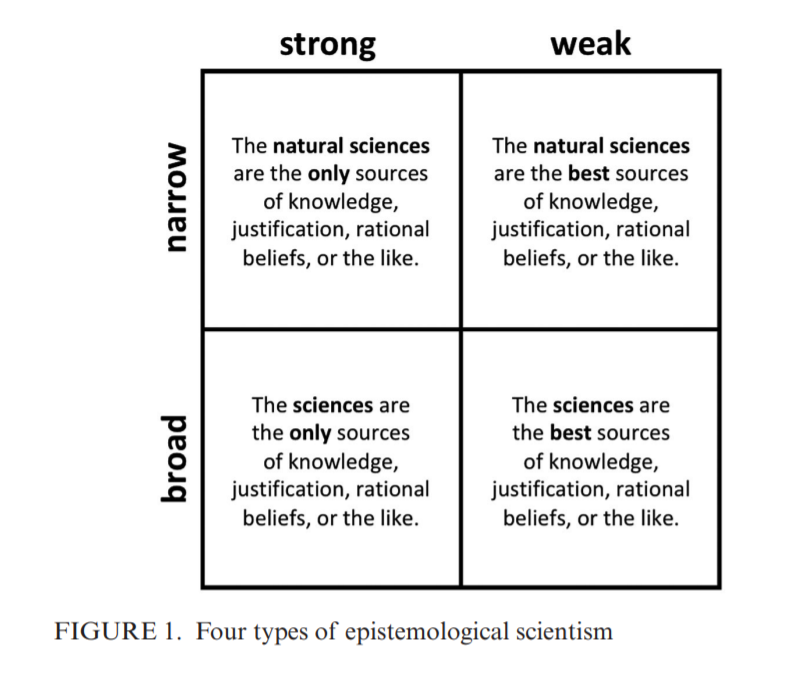 The differences between “natural sciences” and “sciences” here, as Maarten wrote me, is this:

“Sciences” includes the human and social sciences, (like “Wissenschaft” in German).

But I’d prefer the distinction to be between “science” (what is practiced by scientists proper) and “SCB”, or the use of the empirical method to ascertain truth (SCB includes the human and social sciences). Given that slight change, I’d fall into the lower-left square. The upper left square, says Maarten, is occupied only by the hard-liner Alex Rosenberg.

But never mind. Boudy and I are more concerned with the criticisms of science that fall under the rubric of “non-pejorative scientism”, and he mentions two:

The authors want to draw attention to the other three versions of “scientism”, which are more defensible but nonetheless interesting and non-trivial. In the rest of the paper, they discuss how the different interpretations of scientism fare under two lines of criticism: (a) that scientism is self-defeating because the thesis itself cannot be demonstrated by scientific means; (b) that science inevitably relies on non-scientific sources of knowledge, such as metaphysical assumptions or data from our senses.

I’ve addressed both of these, but Maarten concentrates on the second. (My criticism of [a] is that you don’t need to demonstrate a philosophical or scientific underpinning of the methods of science to accept it, because science works—it enables us to understand the Universe in ways that both enable us to do things like cure smallpox and send rovers to Mars, and to make verified predictions, like when an eclipse will occur or the light from stars might bend around the Sun). Justification of science by some extra-scientific method is not only futile, but unnecessary.

Here I want to focus on the second objection. Does science “presuppose” the existence of an external world, or lawful regularities, or the truth of naturalism, or other metaphysical notions? No it doesn’t. These are merely working hypotheses that are being tested as we go along. I’ve argued for this position at length myself, in a paper with the neurologist Yon Fishman and earlier with my Ghent colleagues. As the authors write:

“One does not have to assume that science can achieve knowledge of the external world. Science can merely start with the hypothesis that some kind of knowledge could be achievable. For all practical purposes, this hypothesis would merely state that there are at least some regularities to be found. This hypothesis could be tested by simply attempting to obtain empirical knowledge with scientific means. If it is impossible to achieve this kind of knowledge, then the efforts would just be in vain. But hoping that something is the case is not the same as believing that it is the case.”

Second, does the fact that scientists rely on their sense organs invalidate scientism? No, because that’s a trivial point. It’s obviously true that science could not even get off the ground without sensory data, but this input too is being refined and corrected as we go along.

All these arguments about science being “based” on some extra-scientific assumption or source of knowledge are guilty of what I call the “foundationalist fallacy”. The mistake is to think that knowledge is something that needs to be “grounded” in some solid foundation, and that if this foundation is not completely secure, the whole edifice will collapse. But this metaphor is deeply misguided, and it inevitably leads to infinite regress. Whatever ultimate foundation you come up with, you can always ask the question: what is that foundation based on? It cannot be self-evident, floating in mid-air. This reminds one of the old Hindu cosmology according to which we live on a flat earth supported by four big elephants. Pretty solid, but what are the elephants standing on? On the back of a giant turtle. And that turtle? On the back of an even larger turtle. And so it’s turtles all the way down, ad infinitum.

Boudry’s Argument from Turtles also goes, I think, for (a): if you must justify using scientific methods through philosophy, how do you justify the value of philosophy in settling such a question? But never mind. If people dismiss science as an activity because philosophy (or science itself) provides no foundation for the empirical method, I’ll just ask them, “Have you ever been vaccinated or taken antibiotics?” If they say “yes,” then they already trust in science regardless of where the method came from. (It comes, by the way, not from a priori justification, but through a five-century refinement of methods to hone them down to a toolkit that works. Remember, science used to include aspects of the Divine, as in creationism as an explanation for life on Earth or Newton’s view that God tweaked the orbits of the planets to keep them stable.)

I’ll be reading the Metaphilosophy paper (click on screenshot below to access and download it), but let me finish by self-aggrandizingly saying that Boudry does agree that SCB is part of the nexus of empirical methodology that includes “real science”

For me, an essential part of scientism is the belief in one unified, overarching web of knowledge, which was defended most famously by the philosopher Willard V.O. Quine. Take an everyday form of knowledge acquisition such as a plumber trying to locate a leak (I believe this analogy is due to the biologist Jerry Coyne). Now plumbing is not usually regarded as a “science”, but that doesn’t mean that my plumber is engaged in some “different way of knowing”. He’s also making observations, testing out different hypotheses, using logical inferences, and so on. The main difference is that he is working on a relatively mundane and isolated problem (my sink), which is both simple enough to solve on his own, and parochial enough not be of any interest to academic journals. Plumbing is not a science, but it is continuous with science, because it makes use of similar methods (observation and logical inference) and is connected with scientific knowledge, for example about fluid dynamics. The plumber or detective or car mechanic is not doing anything radically different from what the scientist is doing.

And here’s a reading assignment:

63 thoughts on “Boudry on scientism and “ways of knowing””