The original saying I paraphrase above, from Oliver Wendell Holmes, is “hard cases make bad law”, meaning you shouldn’t erect general principles based on extreme cases. But in this instance, regarding the defenestration of scholars who say things unpalatable to their peers, or odious things in general, these are the hard cases that should be the basis of a general rule: academic institutions should not punish scholars who exercise their right to free speech.

Sadly, as Benjamin Schwarz—former literary and national editor of The Atlantic—shows in the new Spiked, this rule, which used to hold in the UK, no longer holds, at least with respect to historian and television presenter David Starkey. Starkey, it has to be said, uttered a statement that is reprehensible, unworthy of a thinking person. But it’s still free speech. Read what happened to him by clicking on the screenshot below: 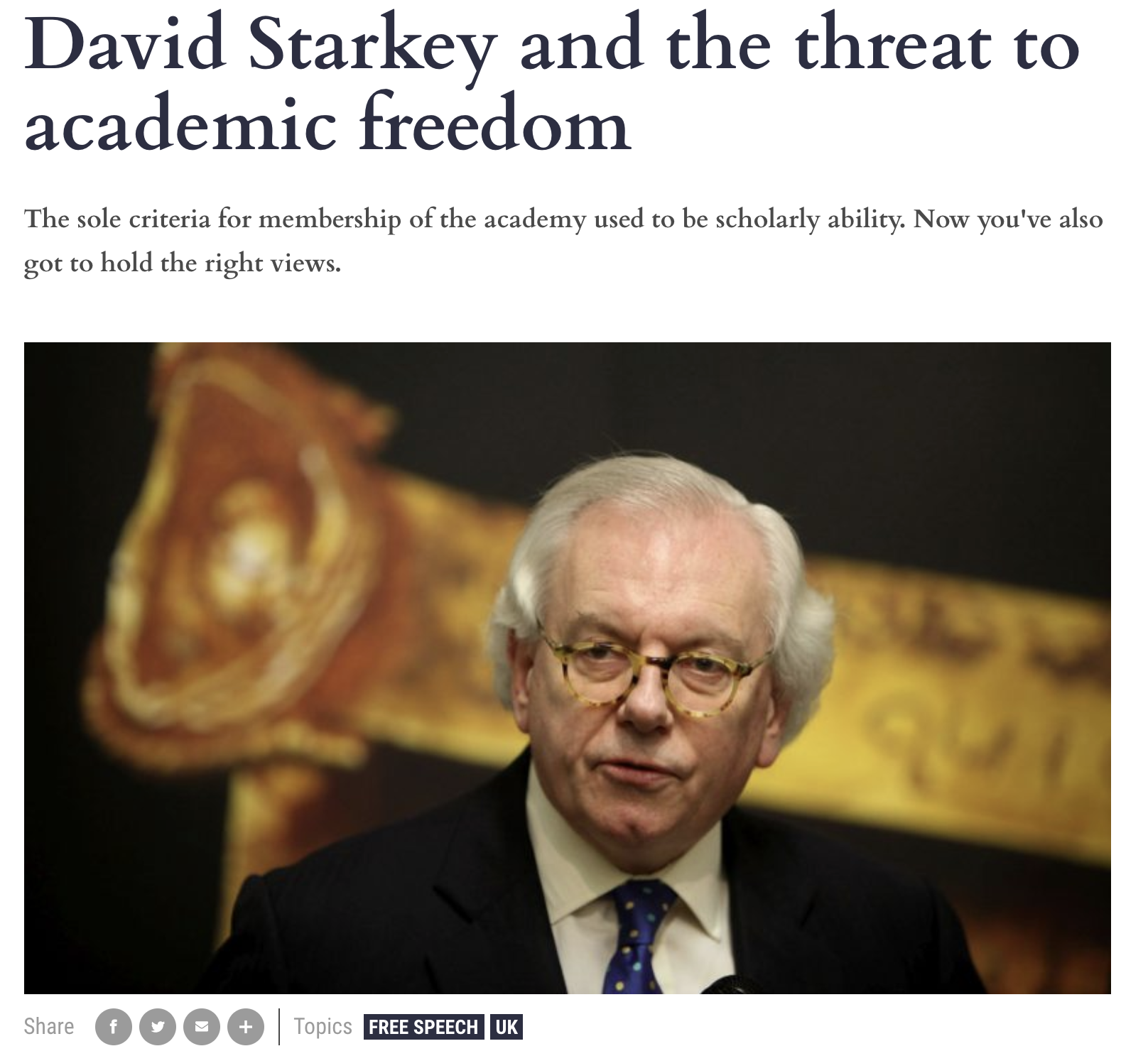 ‘Slavery was not genocide, otherwise there wouldn’t be so many damn blacks in Africa or in Britain, would there?’ With that sentence, in a video interview posted earlier this month, David Starkey, the Tudor historian and documentarian, destroyed his career. Defenestrated by the institutions that had honored his scholarly achievements (Lancaster University; the Royal Historical Society; Fitzwilliam College, Cambridge), that had given him an academic home (Canterbury Christ Church University), and had paid him (his publisher, HarperCollins), Starkey, age 75, is now, and will certainly forever be, adrift and unemployable. No one has publicly defended Starkey’s comment, and Starkey himself has called it ‘clumsy’ and ‘deplorably inflammatory’. And surely it is entirely a private matter, if, because of that utterance, Starkey’s acquaintances and colleagues should choose to upbraid or to shun him. However, in the case of the above institutions, with one partial exception, the only appropriate response would have been no response whatsoever.

Because of this, Lancaster University is contemplating revoking Starkey’s honorary degree, the Royal Historical Society and Cambridge University are deep-sixing his fellowship, and, most unjustifiable of all, Canterbury Christ Church University has ended the Starkey’s visiting professorship. His publisher said not only that it wouldn’t publish future books by Starkey, but might also dump his backlist, punishing both him and the public by simply erasing his published (and acclaimed) scholarship.

Now nobody is going to defend Starkey’s statement. While slavery wasn’t genocide (or, at least, actions designed to wipe out an entire people), it was designed to enslave, degrade, and mistreat an entire people. Starkey’s words were deeply stupid, but should he be punished for it? It depends. A publisher might sever contact with him (there’s no academic freedom in publishing, as we learned with Hachette and Woody Allen’s memoirs), but ditching all previous books is, to me, a ridiculous and indefensible way of virtue signaling. Schwarz declares that most of Starkey’s punishments were not justifiable, on the grounds that scholarly institutions should not take ideological positions and punish those who transgress them:

The sole purpose of any academic institution is – or should be – to pursue and advance knowledge and understanding. This requires a forum free from official censure, so that scholars may pursue any question and consider any view, however despised. Such institutions cannot, therefore, apply any political or moral litmus test to the ideas and speech of their constituent scholars. Thus, in a controversy that heralded the Free Speech Movement, Ernst Kantorowicz, the German emigre medievalist and deeply conservative anti-Communist (and anti-Nazi), famously argued in 1949 that, by requiring a loyalty oath to weed out Communists and Communist sympathisers on its faculty, his adopted institution, the University of California at Berkeley, would destroy itself as an academic community. For the academy to serve its proper function, Kantorowicz recognised, the only criteria for membership must be professional competence and scholarly ability – not the forswearing of any creed, however apparently reprehensible. Furthermore, because academic ability is the only basis by which scholarly institutions can judge their scholars and students, and because those institutions must provide an unfettered environment in which the individual scholar can pursue truth as he or she sees it, these institutions must, themselves, be strictly neutral on political, social and moral questions, no matter how right and settled the answers to those questions may seem.

Schwarz cites a document I’ve mentioned frequently, the University of Chicago’s Kalven Report, one of the foundations of the philosophy underlying my school. (You can find it here.) Sadly, as my University is slowly beginning to take ideological positions that don’t comport with the few exceptions Kalven allowed, the principle of institutional neutrality on politics is eroding even here.

The most forthright and eloquent argument for such institutional neutrality remains the 1967 statement drafted by the great constitutional scholar, Harry Kalven Jr, for the University of Chicago. The ‘Kalven report’ states that ‘a university faithful to its mission will provide enduring challenges to social values, policies, practices and institutions’. But, the report explains, ‘the instrument of dissent and criticism is the individual faculty member or the individual student. The university is the home and sponsor of critics; it is not itself the critic.’ Because a university must ‘maintain an independence from political fashions, passions, and pressures’, it is ‘a community but only for the limited, albeit great, purposes of teaching and research. It is not a club, it is not a trade association, it is not a lobby.’ And because the university is a community only for these limited and distinctive purposes, the Kalven report argues:

‘It is a community which cannot take collective action on the issues of the day without endangering the conditions for its existence and effectiveness. There is no mechanism by which it can reach a collective position without inhibiting that full freedom of dissent on which it thrives. It cannot insist that all of its members favour a given view of social policy; if it takes collective action, therefore, it does so at the price of censuring any minority who do not agree with the view adopted. In brief, it is a community which cannot resort to majority vote to reach positions on public issues… It should not, therefore, permit itself to be diverted from its mission into playing the role of a second-rate political force or influence.’

In short, as the Kalven report explains, scholarly institutions must refrain from deciding social and political questions on behalf of their students and faculty, and they should simply not concern themselves with the views of their students or faculty, no matter how deplorable some or most may find those views.

One by one, academic departments at the U of C are contemplating putting up statements at odds with Kalven, not just affirming that our institution does not discriminate on the basis of race of gender (an appropriate statement since it’s part of the University’s mission), but also asserting more dubious statements from Critical Race Theory. Sadly, Kalven’s report appears on the way out because of pressure from the woke.

It didn’t used to be this way, at least in Britain. Schwarz mentions the case of renowned art historian Anthony Blunt, who, while working for MI5, was also a Soviet agent who passed nearly 2000 documents to Stalin’s Russia. He was, in other words, a traitor. If that isn’t worse than what Starkey said, I don’t know what is. Yet he wasn’t treated nearly as badly as Starkey. (Blunt, in fact, was given immunity from prosecution. As Schwarz notes:

Although some academic institutions with which Blunt was affiliated, revolted by his treachery, disassociated themselves from him, the most important ones did not. Oxford did not withdraw Blunt’s honorary degree (unlike Lancaster University, which is set to withdraw Starkey’s honorary degree). London University, where Blunt was an emeritus professor, held that his position there had been conferred solely for his academic achievements, achievements that were unaffected and undiminished by his personal, moral and political transgressions. The British Academy took a similar line, its fellows voting by a 3-1 majority that Blunt should remain a fellow. As another fellow, and the director of the London School of Economics, Ralf Dahrendorf explained, ‘the British Academy is about scholarship, and that was the decision we took – by a handsome majority’. The arch-Tory historian Hugh Trevor-Roper justified his vote not to expel Blunt more crudely: ‘The Academy is not a tribunal of morals. If we say we’ll expel so-and-so because he’s a shit, we’ll have to have a whole new set of rules.’

Apparently that new set of rules has been applied to Starkey. It’s not exactly that British academe has forgotten the old rules, it just applies them selectively. Although a chorus of critics called for Cambridge to punish its professor Priyamvada Gopal for proclaiming on Twitter ‘White Lives Don’t Matter. As white lives’, Cambridge responded – rightly – that ‘the university defends the right of its academics to express their own lawful opinions which others might find controversial’. Cambridge’s stance on Gopal’s academic freedom also reflects the law. The Education Reform Act of 1988 and the Higher Education and Research Act of 2017 require that universities ‘ensure that academic staff have freedom within the law to question and test received wisdom, and to put forward new ideas and controversial or unpopular opinions, without placing themselves in jeopardy of losing their jobs or privileges they may have at their institutions’.

Note that it’s not just jobs, but “jobs or privileges”, like Starkey had at Cambridge.

Now this isn’t a cut-and-dried situation, for there are cases in which some sort of revocation is necessary. For instance, when J. D. Watson made racist statements, he was forced to resign as director of Cold Spring Harbor Laboratory (CSHL). One could argue that, as director, part of Watson’s mission was to ensure racial equality and equal opportunity, and that was compromised by his statement. On the other hand, CSHL also revoked his  honorary titles, which is far less justifiable.

And if a professor at the University of Chicago said what Starkey did, he might have been censured privately or publicly by colleagues as individuals, but the University itself would not pronounce on his statements one way or another. (To that extent, at least, the Kalven Report is still applied.) The principle of ideological and political neutrality of academic institutions is a precious ideal, one that protects freedom of speech by not penalizing non-conformity. Sadly, it’s on its way out in most American colleges. I hope it’s not on its way out at Chicago.

36 thoughts on “A hard case to make a good law: the ideological impurity of David Starkey”