An academic named Gregory Bassham has written a longish critique (18 double-spaced pages) of my 2015 book Faith Versus Fact. It apparently isn’t published (yet), but you can find it on the Academia.edu link below if you are a member (no fees, though you may have to sign in with Google or Facebook).  Click on the screenshot below, and if you can’t get access to the manuscript, email me for a pdf.

Bassham used to teach at King’s College, Pennsylvania, formerly called The College of Christ the King (a name change was clearly indicated!). It’s a Catholic school, but I don’t know whether Bassham is a believer, though I suspect you’d have to be to be hired there. His biography from Academia.edu is below:

Bassham takes issue with nearly everything I say, and I’ll leave you to read his piece. I want to highlight just one of his beefs, which goes after the most important argument I make in the book. That argument is this: science and religion are incompatible because they both claim to be methods of ascertaining truths about the Universe, but only science has ways of adjudicating, refining, and deepening our understanding. (Religion, of course, does other stuff as well.) Religion’s ways of ascertaining “truth”, which involve Scripture, authority, revelation, and other things subsumed by the rubric “faith”, are not reliable, and that’s why there are so many religions making conflicting claims. We have less certainty about God than we do, say, about the reproductive behavior of the lobster.

Moreover, I argue that theology has not “advanced” in the past several millennia. What I mean by this is that although theology may have gotten more convoluted, and corrected some of its earlier errors (for example, by admitting that creationism is false, which Bassham does—but 73% of Americans don’t), it still hasn’t advanced in understanding the divine. How many gods are there? Is God all-powerful and all-loving? Was Jesus the divine son of God, a prophet, or didn’t he exist? Did God give us free will, or are we predestined? Are you saved by faith alone, or by works? Did Joseph Smith really get those golden tablets that told of Jesus’s visit to America? There are millions of questions like this, not including the question of whether there actually are any gods, but nobody—including Bassham and his much-admired Sophisticated Theologians®, can answer them. We are as ignorant as was Aquinas, Maimonides, or any other theologian in history.

It is this point—whether religious knowledge can tell us empirical facts (Bassham argues that it can)—where we part most strongly. And I have to say, Bassham’s argument for the different “ways of knowing”, whereby religion apprehends such facts, is unconvincing. Here are a few excerpts from his paper:

Second, most theologians and informed religious believers today would reject Coyne’s claim that that there is no empirical evidence for the supernatural. Though some would dispute it, I agree with Coyne that science has failed to find credible evidence of such allegedly supernatural phenomena as ESP, reincarnation, miracles, psychic channeling, near-death experiences of a heavenly afterlife, or the healing powers of prayer. But this is a far cry from saying that there is no empirical evidence for God or some higher power or transcendent realm. Few contemporary theologians would claim that belief in God is a non-rational or even contra-rational leap of blind faith. They point to phenomena such as the order and beauty of the world, the consciousness of objective moral obligations, the natural desire for eternal happiness, the “fine-tuned” nature of physical constants, testimony of miraculous events, fulfilled prophecies, the credibility of Christ’s claim to be divine, the literary beauty and spiritual power of the Bible, and various kinds of religious experience as providing an evidential grounding for acts of religious faith. Coyne offers brief rebuttals to some of these evidentiary arguments, but a great deal more would need to be said to support his claim that there are irreconcilable conflicts of philosophy between science and religion.

Yes, I should have written two books—or perhaps a big, fat, boring disquisition on religion aimed at theologians. That was neither my purpose nor my audience.

As for not saying enough about this, I wrote a trade book, not a tome on theology for scholars, and deal with both Sophisticated Theology® and the “theology” held by most believers, which isn’t Sophisticated.

So where does religion find its evidence? Bassham gives a few ways:

Second, Coyne’s argument relies upon a conception of faith that few contemporary theologians would accept. In defining faith as “belief without—or in the face of—evidence,” Coyne commits a strawman fallacy that Richard Dawkins and many other vocal critics of religion have also perpetrated. There are many widely accepted conceptions of faith that do not view it as evidence-free belief. Among these are the Catholic “propositional” view of faith as assent to revealed truths on the authority of God the revealer; the Calvinist conception of faith as firm belief in key tenets of the Christian faith as a result of the internal instigation of the Holy Spirit;  the modern Protestant “voluntarist” view of faith as interpretive trust in the self-revealing actions of God within human history; and the modern “Existentialist” conception of faith as an attitude of commitment, acceptance, and “total interpretation” made by the whole person. None of these common views of faith see it as an evidence-free form of cognition.

Umm. . . if faith is truly a “way of knowing”, and reveals empirical truths, as Bassham avers, then how can these “conceptions of faith” possibly tell is what is true? They can tell us what to believe but they can’t confirm it. Or if he’s simply saying that there are conceptions of “faith” that don’t align with my definition of “belief in the face of evidence”, he runs into the same problem: how do these ways tell us which beliefs are true?

Third, while it is true that religion and science generally use different methods, it is far from clear that this makes them incompatible. If it did then one would have to say, implausibly, that science is incompatible with historiography, political science, legal theory, philosophy, and literary theory, for all of these disciplines make claims about empirical reality that are frequently “incorrect, untestable, or conflicting“. There are many “ways of knowing” that cannot, and do not, employ the rigorous methods of science. This makes them different from science but not necessarily incompatible with it. Historiography like religion, relies heavily upon appeals to authority. Philosophy, like theology, relies strongly on appeals to intuition, reasoning, and critically defended interpretations. Yet it would be odd and implausible to claims that either historiography or philosophy was “incompatible” with science.

In fact, I deal with these issues at length in the book, and show that insofar as “revealing facts about the world and Universe” goes, empirical investigation (“science” writ large), is the sine qua non, and historians can’t declare truth by fiat. They need evidence, not authority. Philosophy deals with logic and rational contemplation, not empirical truth, though philosophy can contribute to finding empirical truths. Insofar as any of these disciplines declare what is empirically true, but not by using empirical methods (like “appeals to authority”), they are in conflict with science.

At the end, Bassham ignores the fact that I deal with, explain, and take apart Steve Gould’s NOMA idea, so I do not overlook or understate “the many ways in which science and religion are playing quite different ballgames.” I’d argue, in fact, that my analysis of NOMA is the most complete one in print.  Of course science and religion do play different ballgames, but some of the innings overlap, and that is where the two areas become incompatible.

Fourth and finally, in saying that religion and science “are competitors in the business of finding out what is true about our universe” (xvi), Coyne overlooks or understates the many ways in which science and religion are playing quite different ballgames. In large measure, religion deals with questions of meaning, value, significance, purpose, beauty, finitude, guilt, anxiety, and ultimacy that science does not address. Moreover, the “tools” that religion uses (e.g. revelation and personal religious experience) are not necessarily faulty simply because they are unscientific. If God, as religious believers typically claim, wants to be known but not in ways that are overtly obvious or coercive, what “tools” would he provide so that even pre-literate peasants could have warranted beliefs about his existence and will? Presumably something very similar to the tools that believers claim that he has provided.

Note, too, that in the last three sentence Bassham admits that religion uses revelation and personal experience as reliable ways of knowing. The last two sentences make a virtue of necessity: we see no evidence for God, so Bassham argues that God deliberately made Himself hard to find, ergo only revelation and personal experience, things that can happen to even “pre-literate peasants”, constitute evidence. I guess the same goes for UFOs, Sasquatch, and leprechauns.

I tried to find a picture of a bass and a ham, and came up with these bass and ham cakes, whose recipe is given in Field & Stream. I don’t like the idea of fishcakes with ham, but I’d find them more palatable than Sophisticated Theology® any day! And Sophisticated Catholic Philosophy® is among the worst species in the genus. 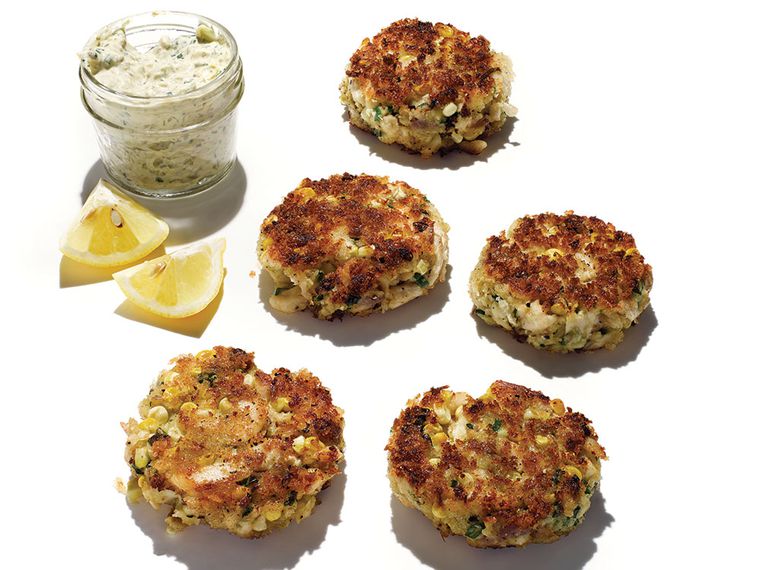 49 thoughts on “A religious scholar goes after my book “Faith Verus Fact”, mainly because I didn’t deal with Sophisticated Theology®”