I’ve been remiss in posting duck pictures, but my hands have been full tending them. Most of these pictures of Honey and her brood (with a few exceptions) were taken four days ago, on May 20, and the dates of the videos are given below.

First, the usual pandemonium on the “beach”, with sleeping ducklings interspersed with turtles (red-eared sliders) while Mom looks on. 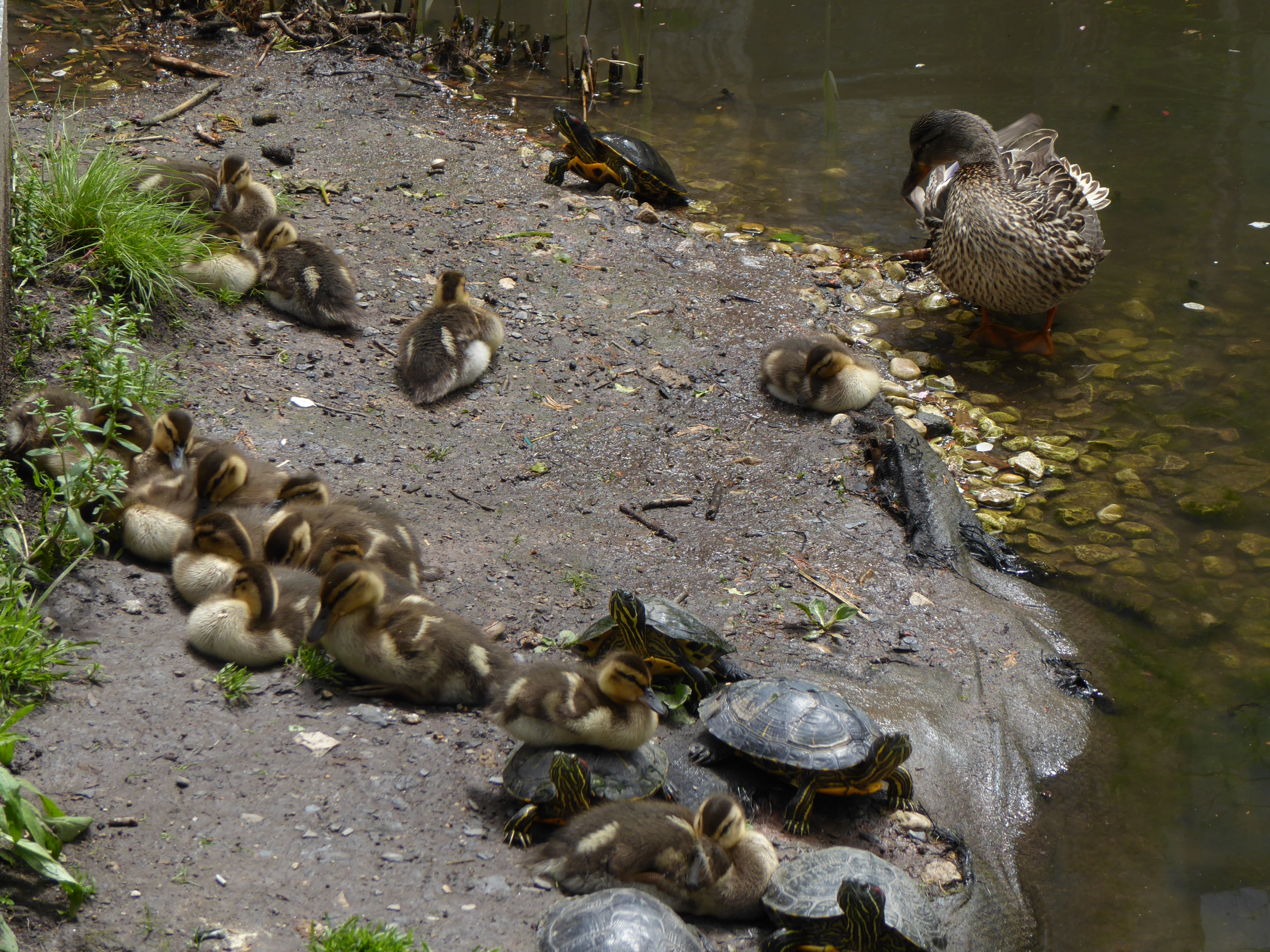 Turtle and duckies live together in perfect harmony.  You can see that the ducklings have grown a lot. 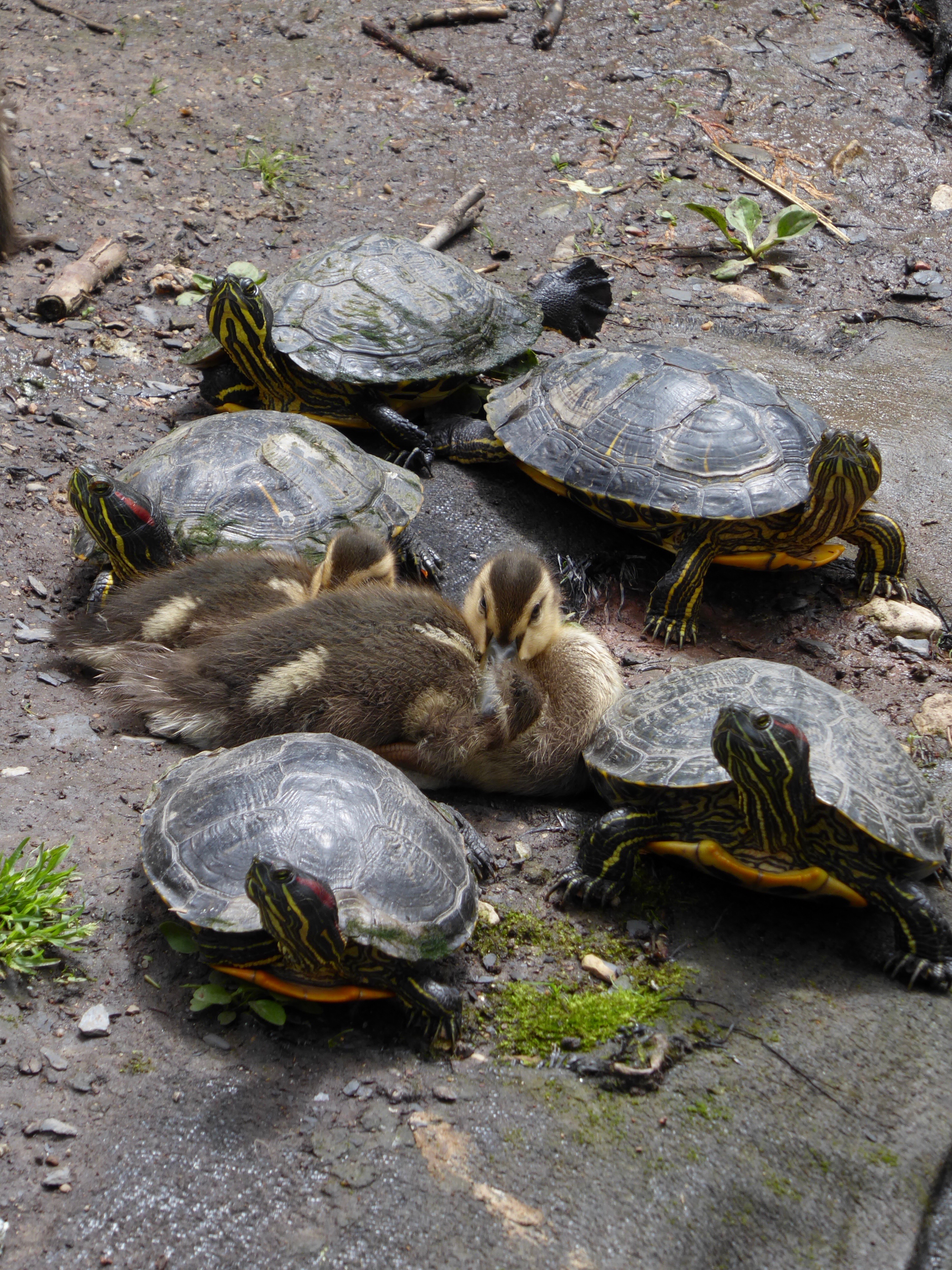 A lovely little girl takes in the spectacle. 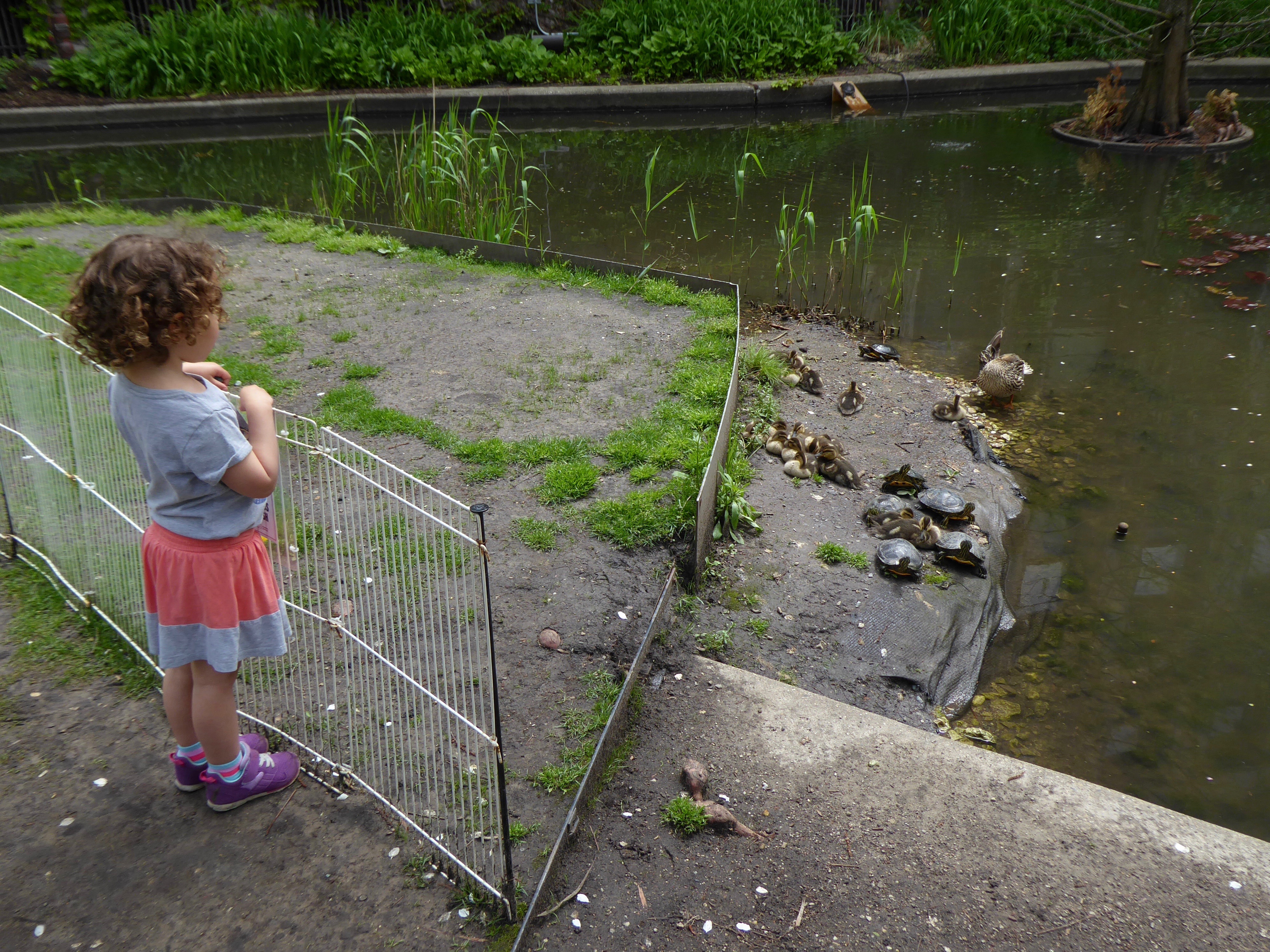 This was a first for me: a duckling sitting and then sleeping atop a large turtle! 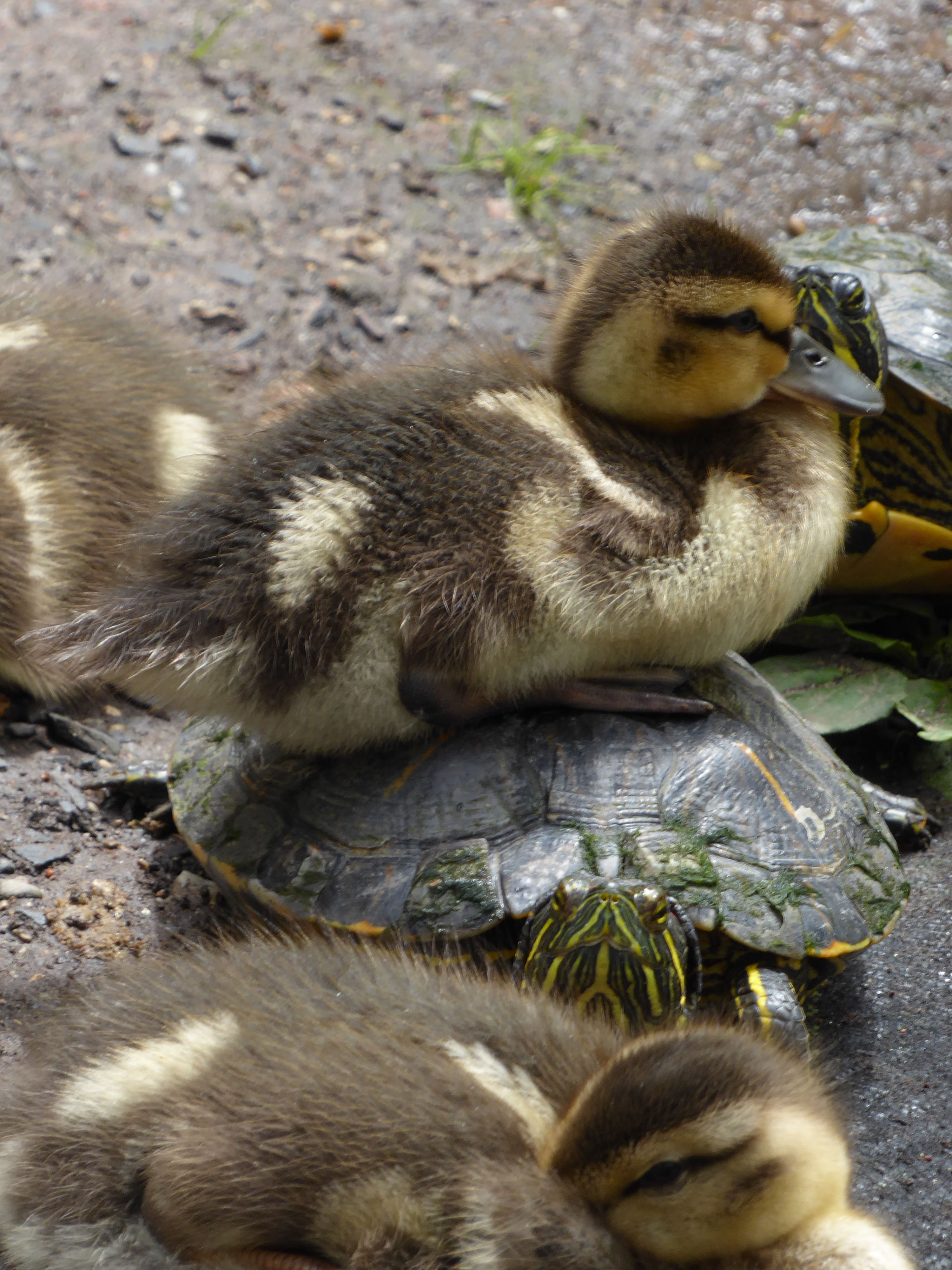 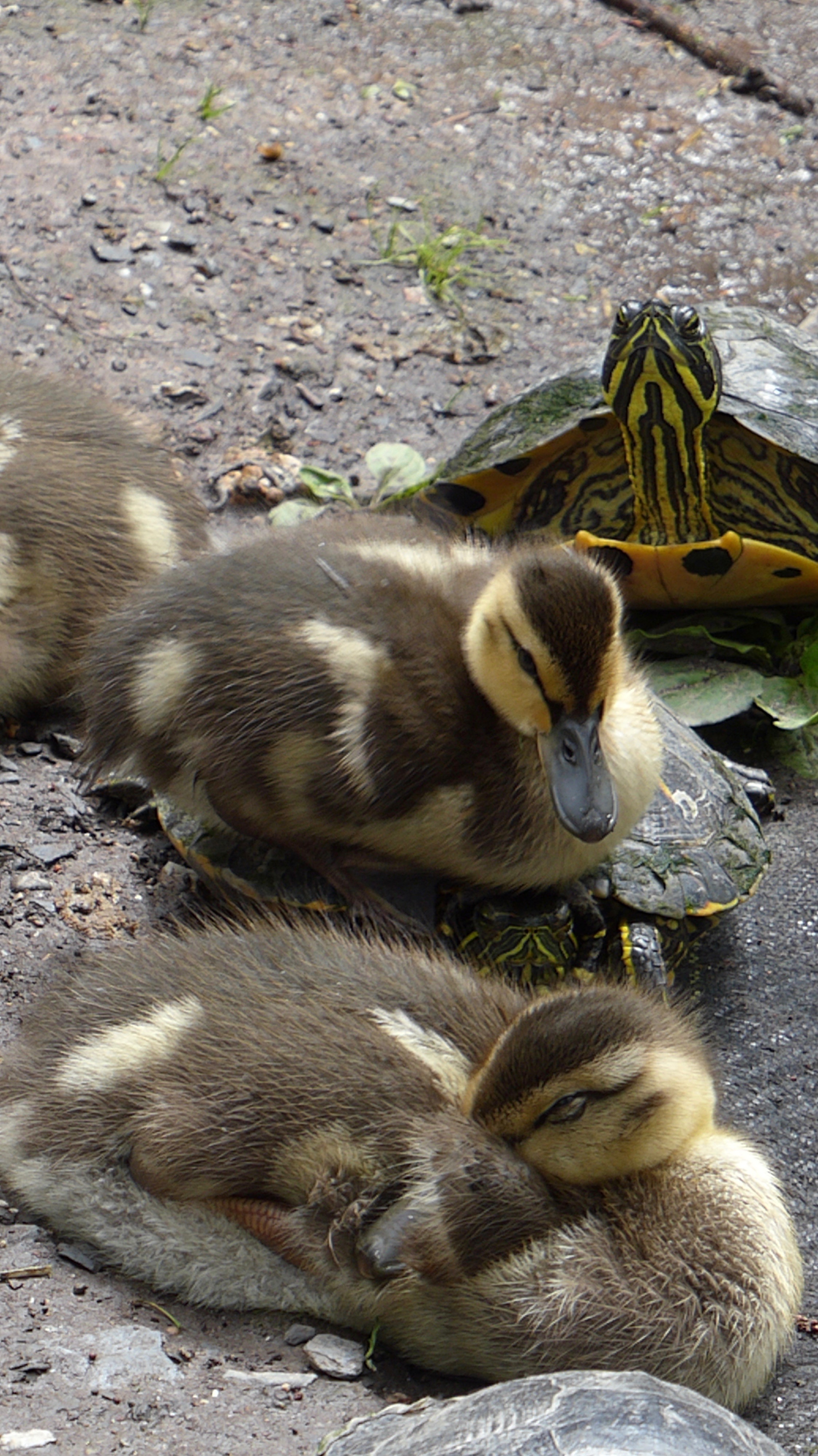 The turtle even moved a bit, and the duckling, who got a short free ride, didn’t even wake up. 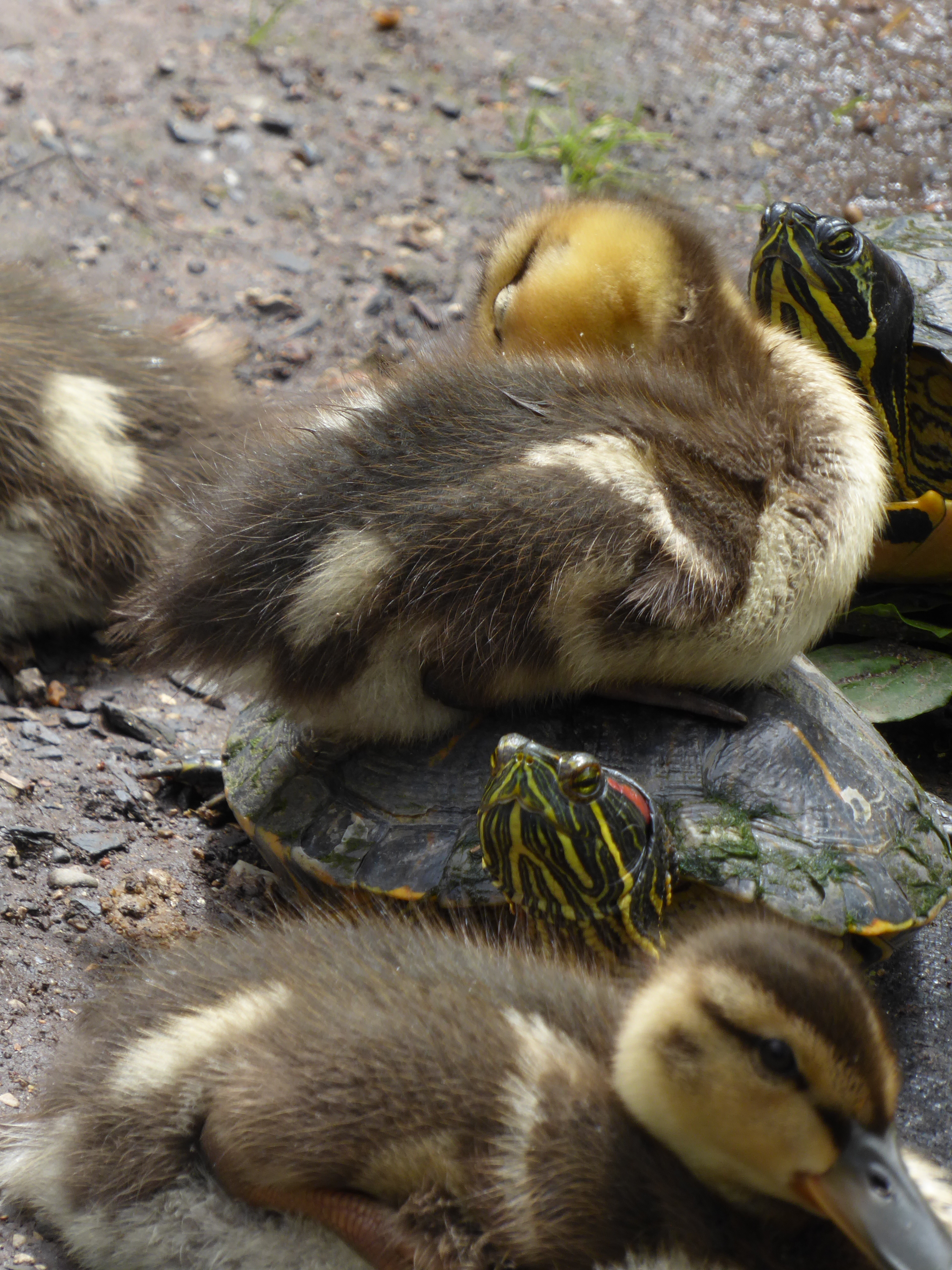 Honey sitting on her favorite place in the pond: a big clump of grass that, sadly, is close to the fence, so she’s abandoned it since she’s so often disturbed there by gawkers. Notice Wingman standing guard above; the drake is worth his weight in gold. 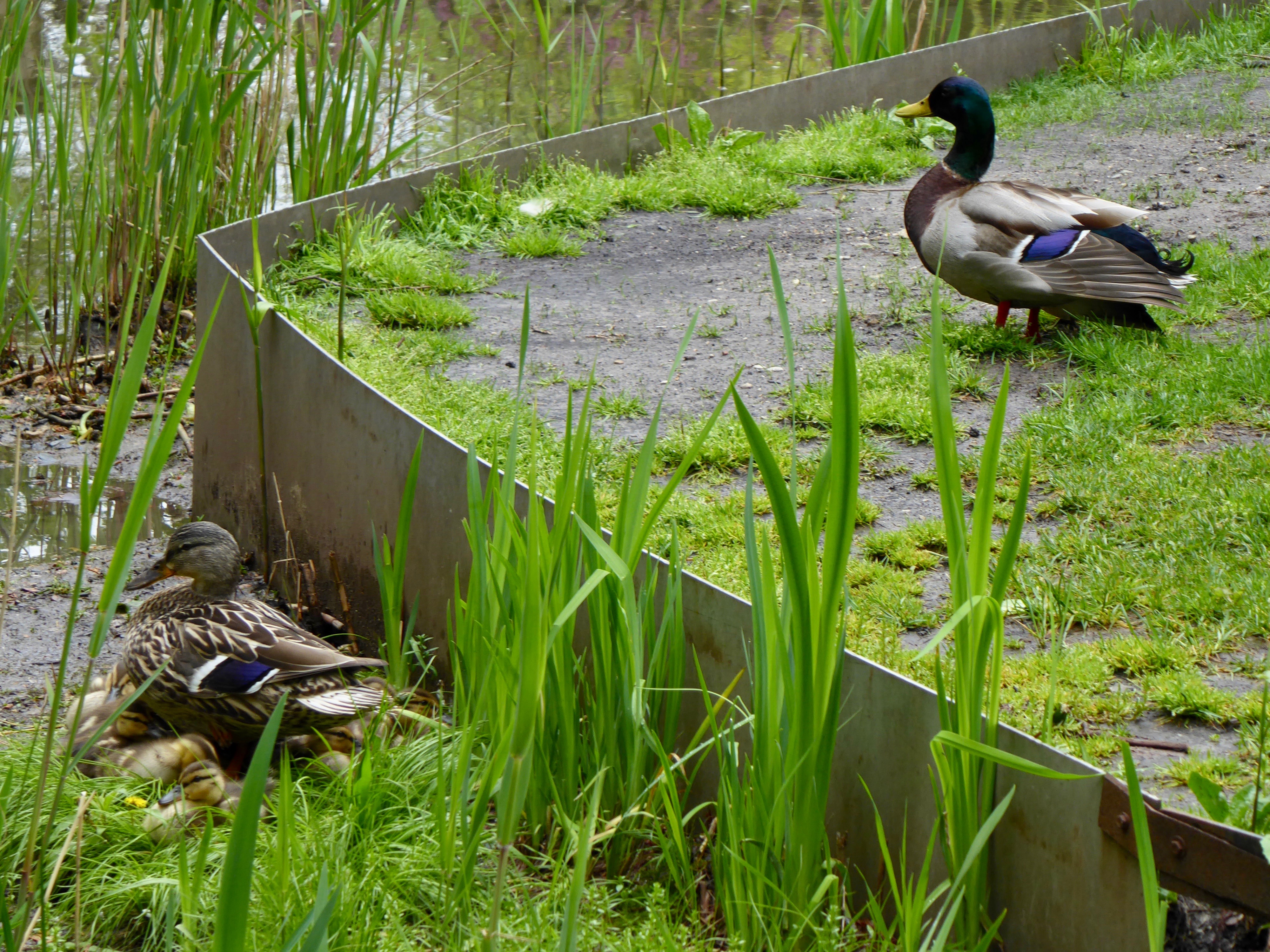 What’s under her when she sits on the clump. Aren’t they adorable? 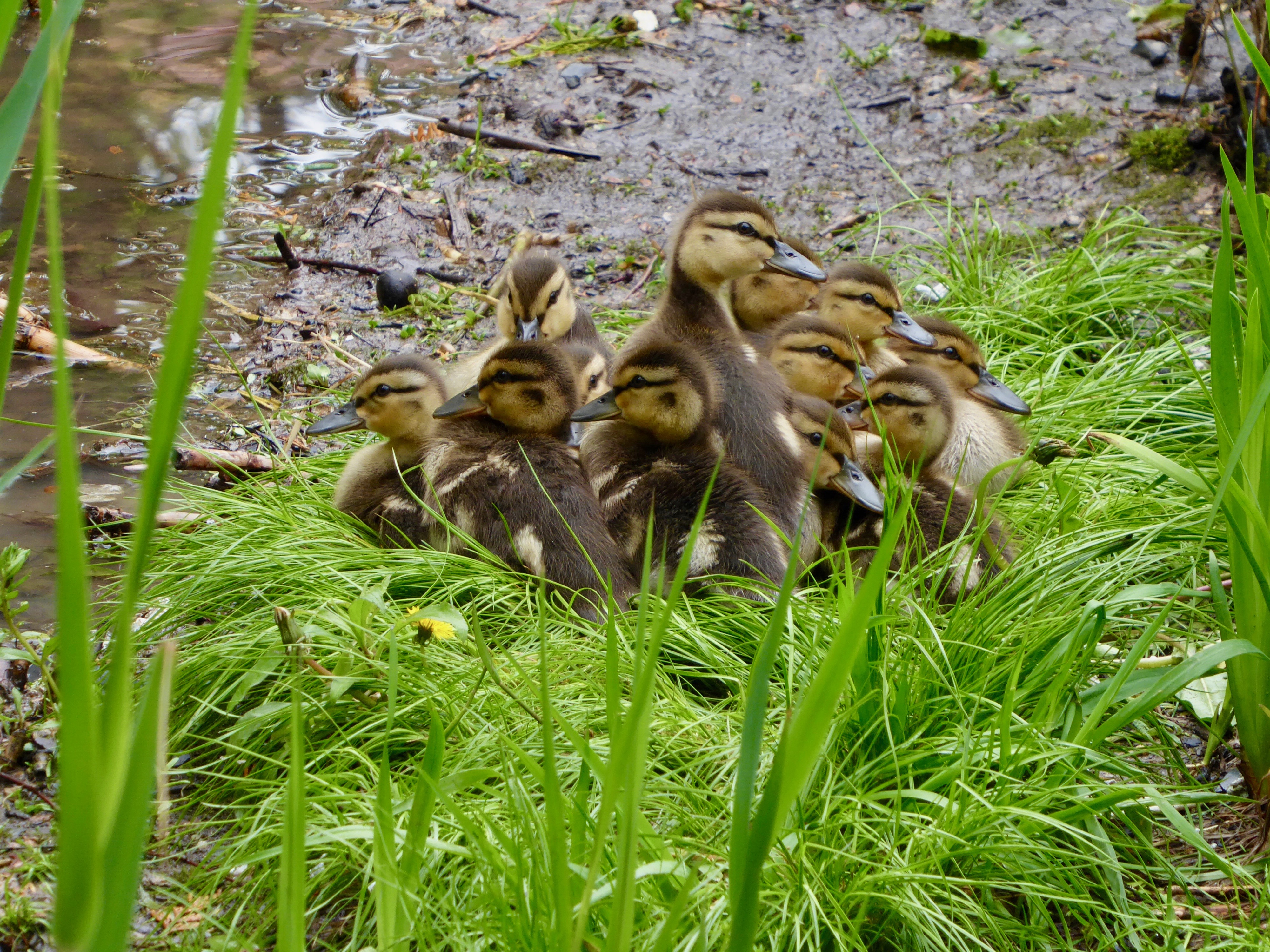 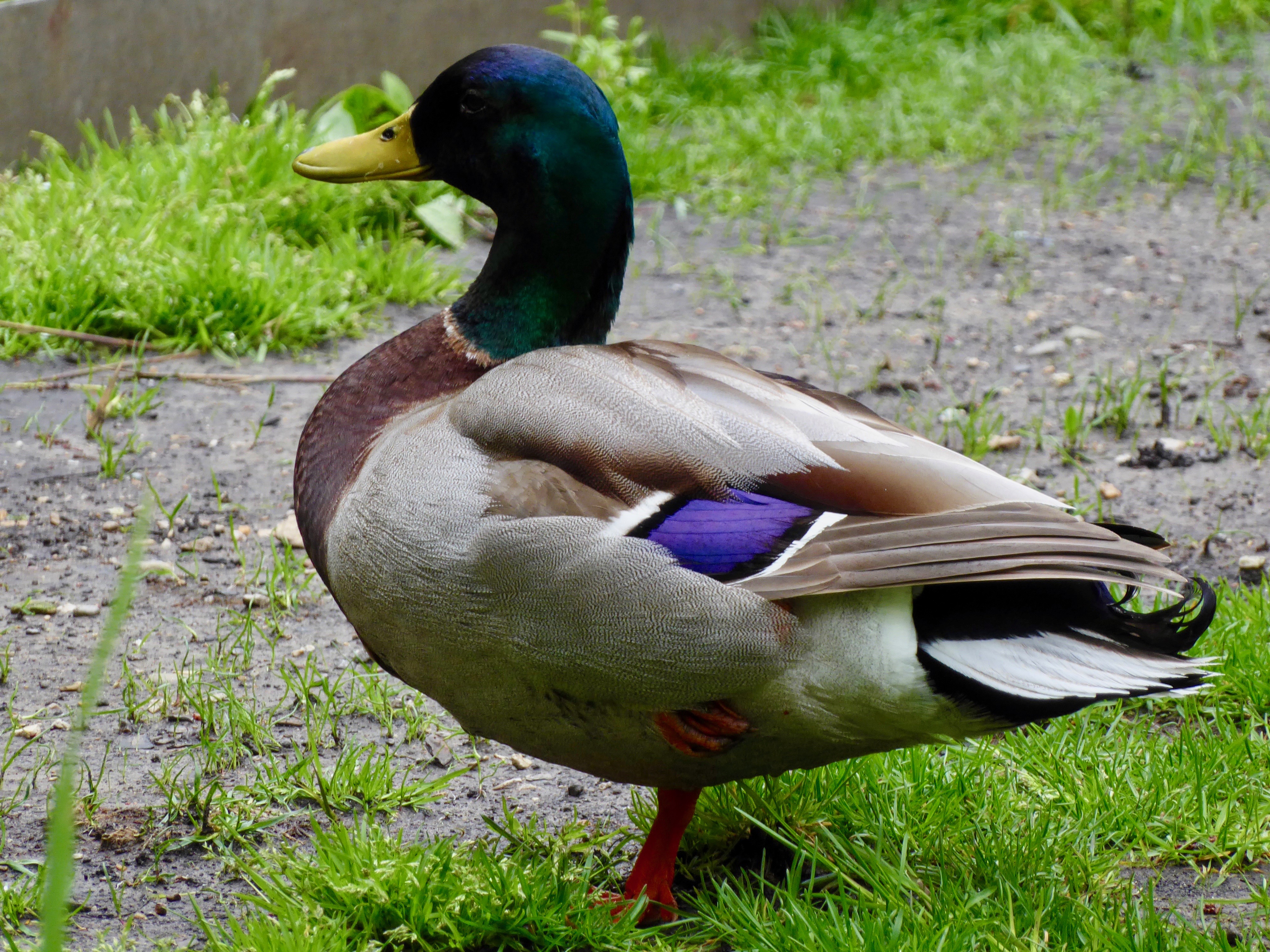 Sunning on the beach: 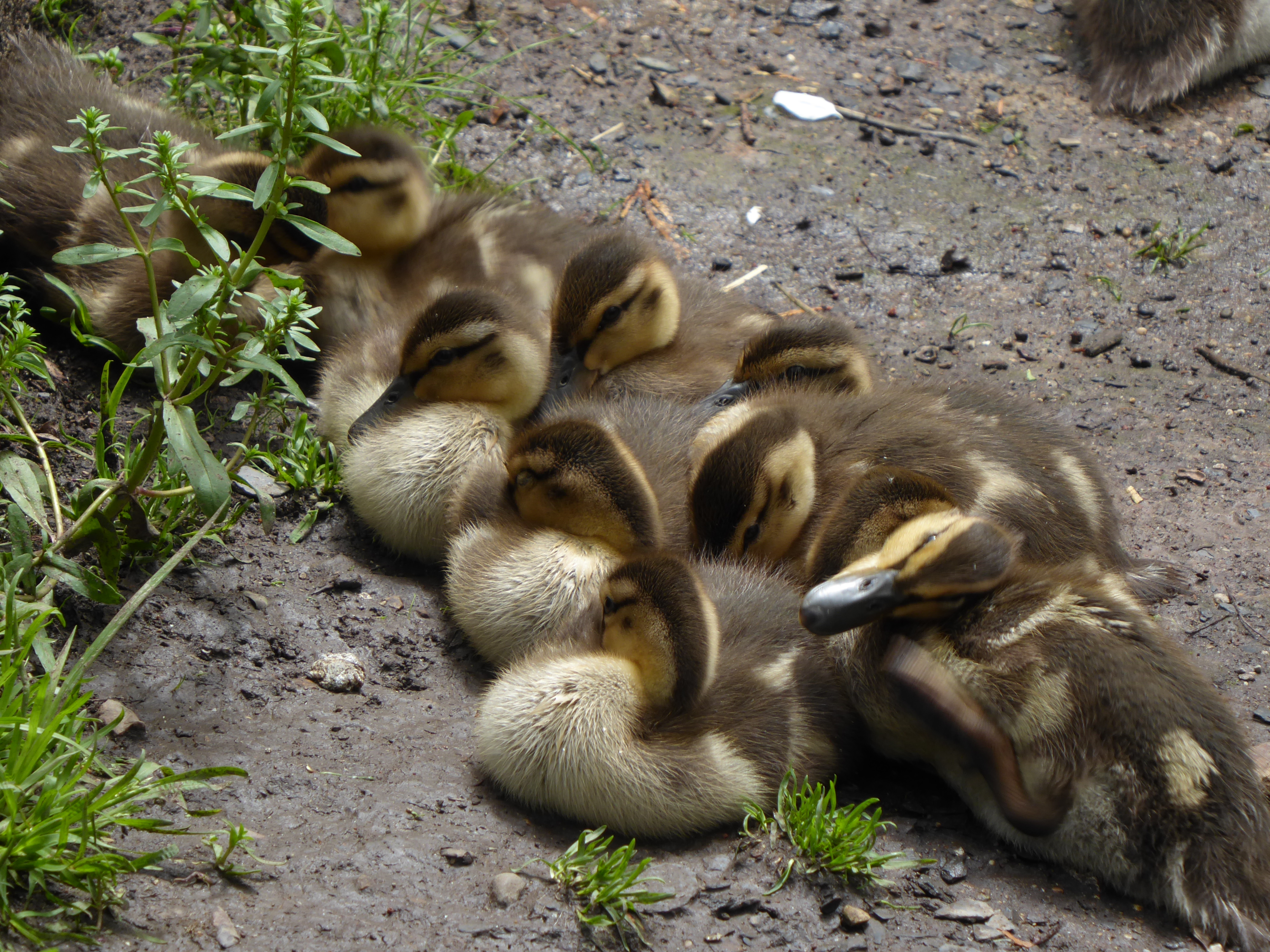 The babies are getting elongated and assuming a more ducklike shape. Soon they’ll be in their spiked “punk” plumage: 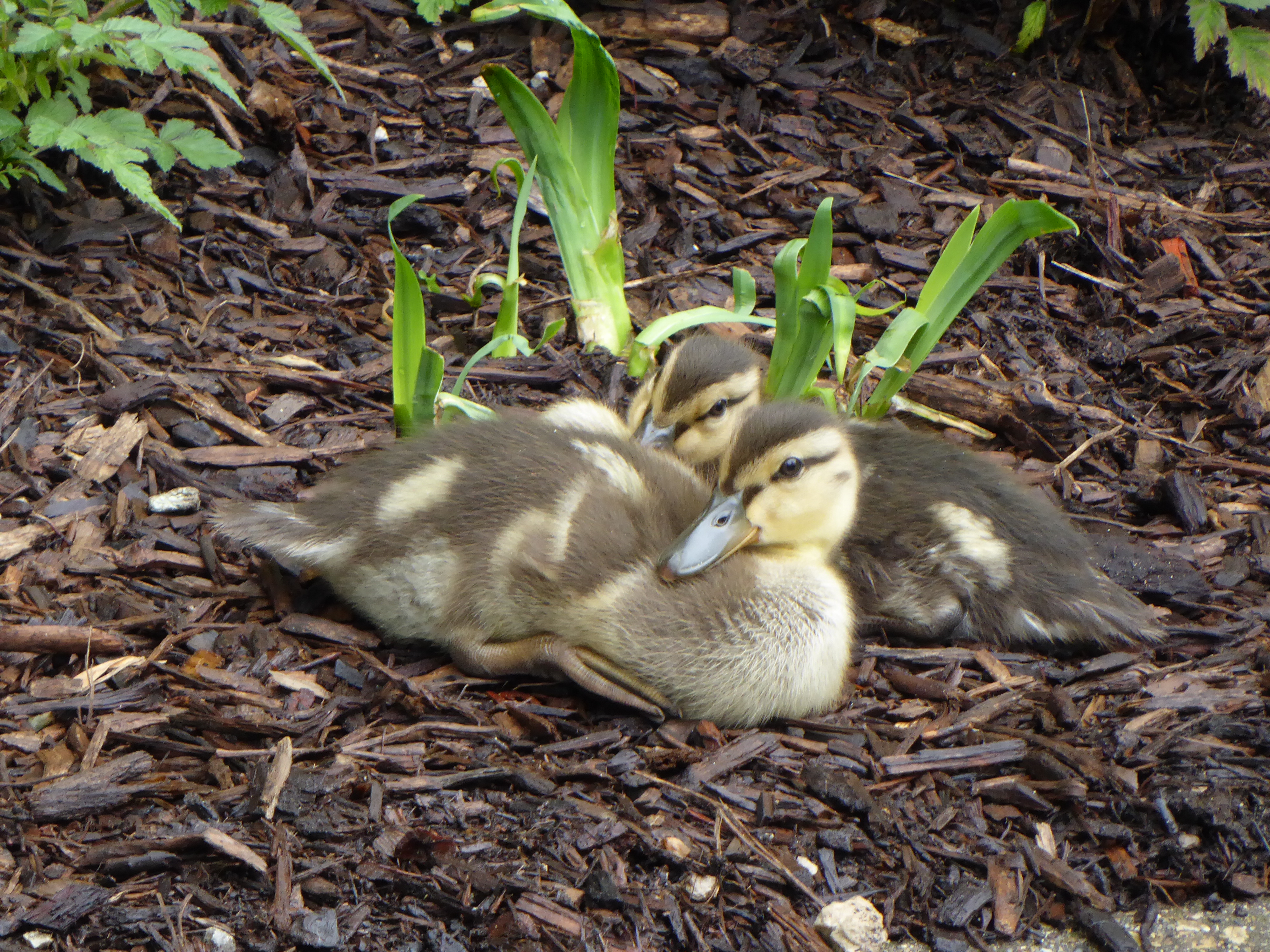 A video of the young ‘uns learning to nibble grass:

Dorothy still comes in every day or two. Yesterday I saw her fly up to the window where she last nested, and I wonder if she’s renesting in her old nest. I am not keen on that since I don’t want Honey, who has become a Killer Duck (viz., the Rouen ducks that she attacked when some misguided person tried to introduce them into the pond), to attack a new brood of Dorothy babies (her own will be of an age so different that she won’t adopt them). When she comes, the two-timing Wingman often consorts with her. 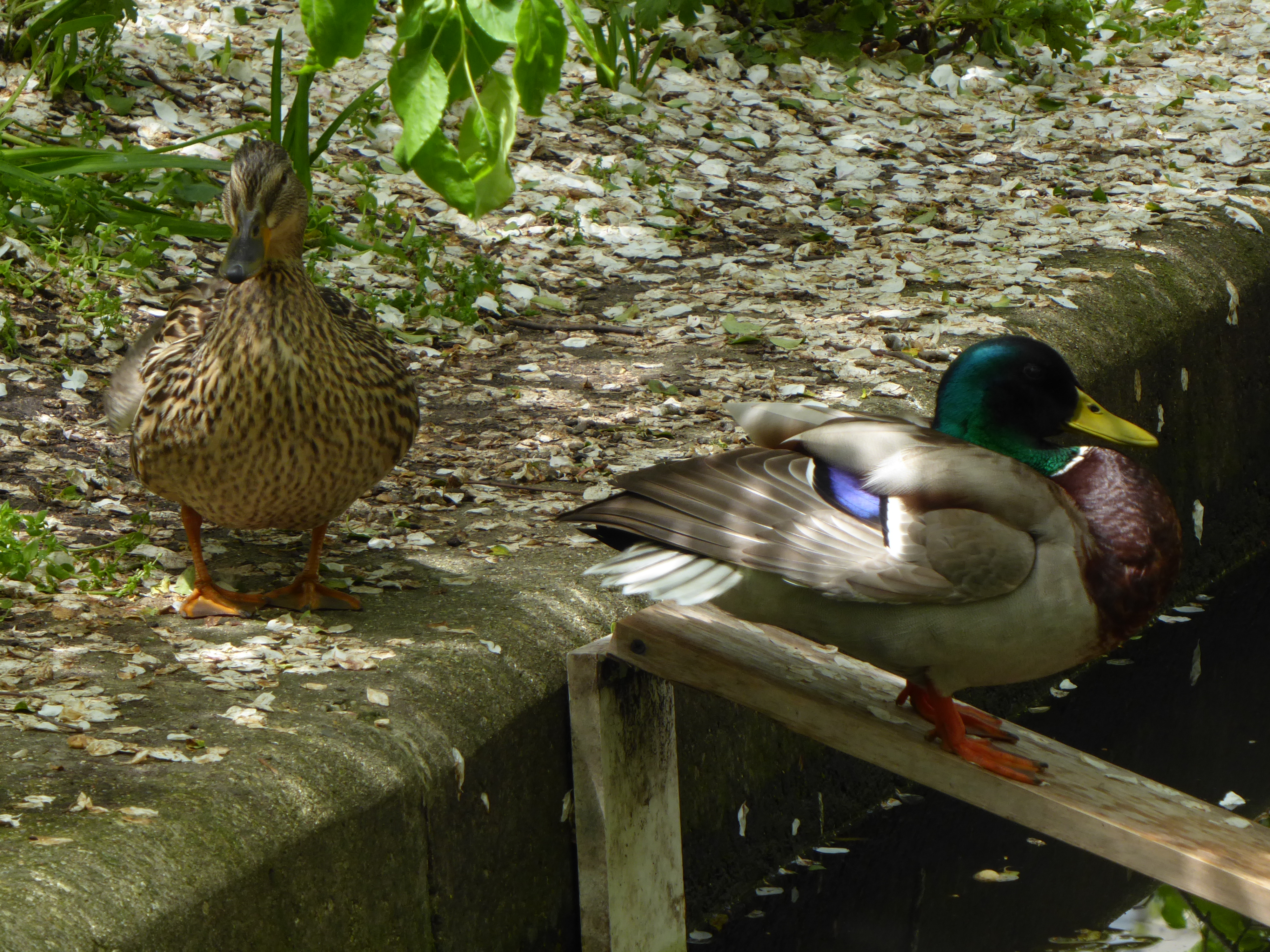 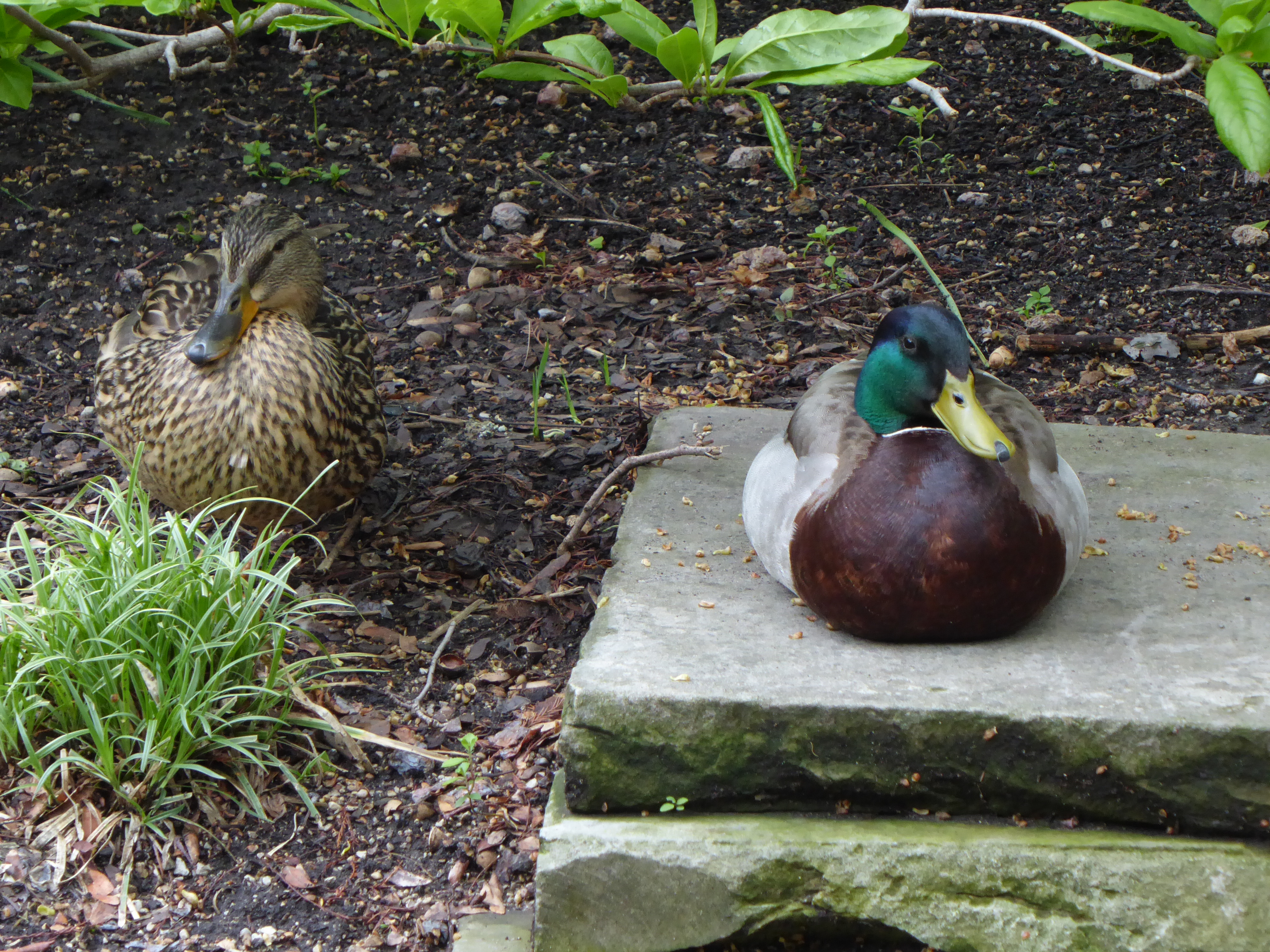 A video of the brood sunning with turtles:

Here are two short videos taken with the phone of Jean Greenberg, my colleague who also enjoys duck watching. They show the young ones beginning to have the “zoomies”: skittering quickly over the surface of the water and diving and swimming underwater. You can hear us chatting and me answering people’s questions during the videos.

The behavior is contagious, and will get more frequent as the ducklings mature. And then, on one fine day, the skittering will turn into weak flight, and they’re on their way. It’s interesting for me to think about what goes through a duck’s brain when it first gets into the air. I’m sure they have no knowledge that they’ll develop that ability!

Stay tuned for the next installment, featuring photos of me and Sammy, the adorable duckling that I took care of for two days. He’s been rehabbed to a good wildlife shelter, and I have high hopes