This week’s New York Magazine column by Andrew Sullivan (click on screenshot below) is, as usual, in three parts. The first one is, as always, the main one, and it’s about Trump’s pathology. The second discusses Vitamin D as a possible palliative for coronavirus infection (something I haven’t heard about), and the third is about Sullivan’s old mate and new Labour leader Keir Starmer, whom Sullivan much admires.  I’ll give excerpts just from the first two sections. 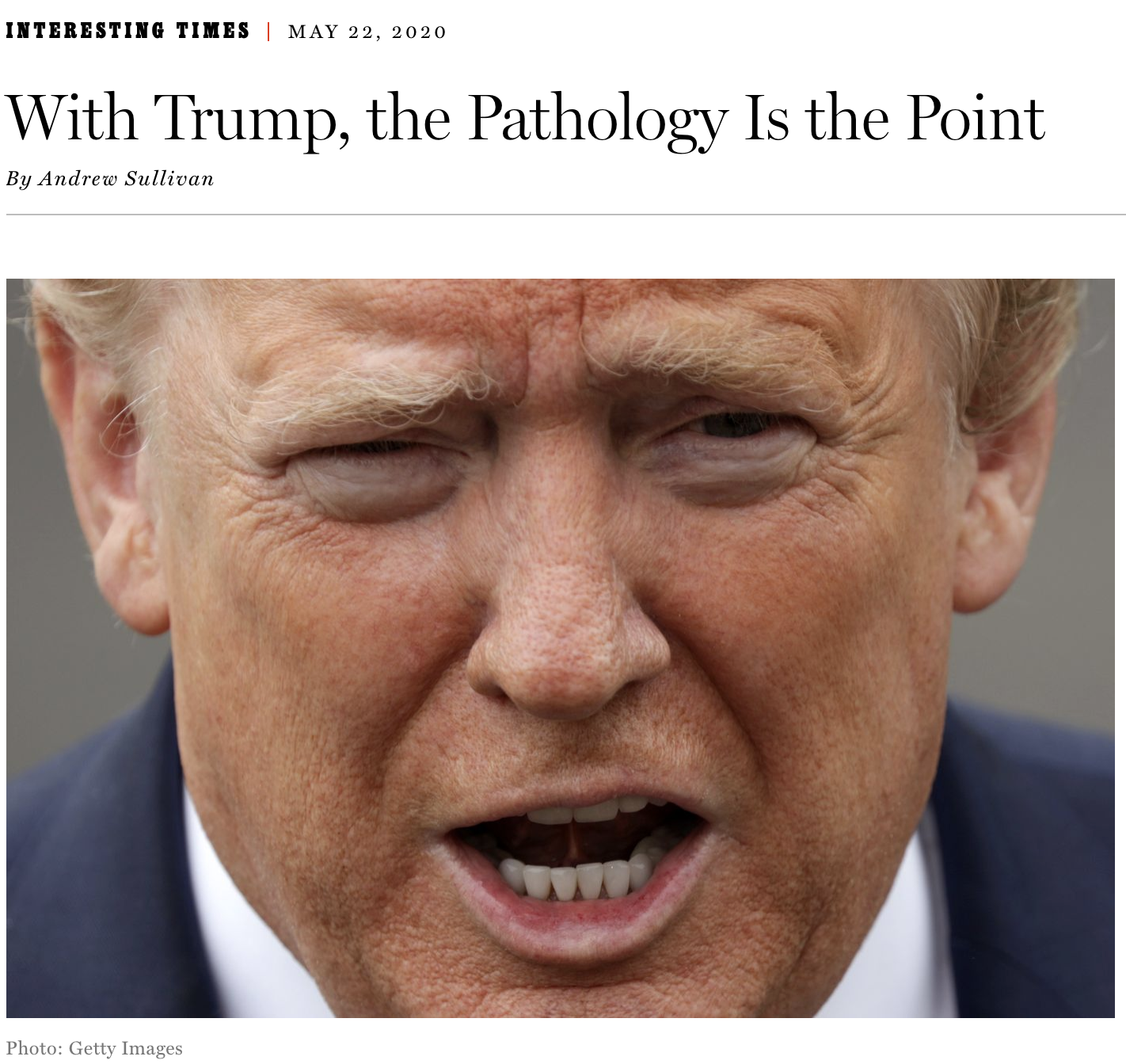 You’ve heard Trump’s many gaffes about the pandemic and virus these past few weeks: his “per capita” fluff, the infamous “put light and bleach up your bum” remarks, his claiming to take hydroxychloroquine, his failure to understand the difference between a positive or negative test, and so on. To reverse the famous saying of Walter Brennan as Grandpappy Amos, it was all “No fact, just brag.” And, as I wrote this morning, the failure of his arrant stupidity to alienate his supporters is pretty baffling, and doesn’t speak well of American rationality. I used to dislike Trump intensely and opposed his election and policies from the outset, but I’ve grown to despise the man with the white heat of a thousand suns. No, I’m not “biased against the man,” as one reader accused me of this week; he has made me despise him because of his incompetence and miserable failure as a leader. But I digress:

Here’s a bit of Sullivan’s take:

I know we’re used to it [all of Trump’s meshugga statements], but there is no rational or coherent explanation for any of this. There is no strategy, or political genius. There is just a delusional pathology in which he says whatever comes into his head at any moment, determined entirely by his mood, which is usually bad. His attention span is so tiny and his memory so occluded that he can say two contradictory things with equal conviction repeatedly, and have no idea there might be any inconsistency at all.

His COVID-19 press conferences were proof of his mental limits. He couldn’t understand basic questions. He had no grip on epidemiology. He believes that tests are bad, because they make America look bad, and then boasts of his record in testing (which is, of course, not good). When a White House staffer, Vice-President Pence’s spokesperson, Katie Miller, tested positive for COVID-19, this is what Trump said: “She tested very good for a long period of time. And then all of a sudden today she tested positive. So, she tested positive out of the blue. This is why the whole concept of tests aren’t necessarily, right, the tests are perfect but something can happen between a test where it’s good and then something happens and then all of a sudden, she was tested very recently and tested negative.” With anyone else, we would assume he was drunk when he said that. His sobriety is indistinguishable from alcoholic stupor.

. . .The key thing, however, is that none of this seems to matter to the supporters of the president. For them, the pathology seems to be the point. It is precisely Trump’s refusal to acknowledge reality that they thrill to — because it offends and upsets the people they hate (i.e., city dwellers, the educated, and the media). The more Trump brazenly lies, the more Republicans support him. The more incoherent he is, the more insistent they are. Bit by bit, they have been co-opted by Trump into a series of cascading and contradicting lies, and they are not going to give up now — even when they are being treated for COVID-19 in hospital.

Tribalism is now not just one force in American politics, it’s the overwhelming one, and tribalism abhors reality if it impugns the tribe. But you can’t have both tribalism and public health. When you turn wearing a simple face mask into a political and cultural symbol of leftism, when you view social distancing as a concession to your enemies, you deeply undermine the power of millions of small impediments to viral outbreak.

What we are seeing is whether this tribalism can be sustained even when it costs tens of thousands of lives, even when it means exposing yourself to a deadly virus, even when it is literally more important than your own life. We are entering the Jonestown phase of the Trump cult this summer. It is not going to be pretty.

Finally, Sullivan, who as an HIV positive man is immunocompromised, says he’s started taking Vitamin D, as he says that it “enhances our innate immune systems” and prevents a “cytokine storm” when the immune system is overstimulated. He quotes experts who say that vitamin D isn’t really a preventive, in the sense that it will help stop you from being infected, but could reduce the severity of a viral infection.

Sullivan argues that the palliative effects of Vitamin-D might help explain why black and Latinos die disproportionately often from the virus (vitamin D is made in the skin upon exposure to UV radiation, which is why it’s called the “sunshine vitamin”), and pigmentation reduces the rate of its production. But of course, as Andrew notes, there are cultural rather than genetic reasons why minority groups might have higher death rates. Sullivan also says that the Vitamin D effect might “help explain why, for example, Florida has done so much better than New York.” (But of course sunny Brazil is suffering mightily from Covi-19.)

I’ll contact my doctor and ask him to comment here about what evidence, if any, there is for a Vitamin D effect, and should we be taking it. The upside compared to nostrums like hydroxychloroquine is that the vitamin is much safer, and in reasonable doses has no bad side effects.

Sullivan closes with his advice for us:

Even among those most at risk, health-care workers, the disproportionate rate of deaths for racial minorities is striking. And even studies that fully control for preexisting health conditions alongside socioeconomic factors found part of the gap unexplained. A new study goes further and “argues strongly for a role of vitamin D deficiency in COVID-19 risk.” It seems to me a good idea to educate those most at risk — especially racial minorities and the old — and suggest taking a modest vitamin D supplement. It’s cheap, easily available, and might cut the death rate dramatically. What’s the harm?

Well, first do no harm. I suspect Andrew’s right about this, but let’s find out before we rush to the drugstore for Vitamin D.

119 thoughts on “Sullivan on Trump and vitamin D”