It’s unbelievable what Trump supporters, Republicans, and conservatives can bring themselves to believe, but this new Yahoo/YouGov poll shows that bizarre and unevidenced beliefs are held by a substantial proportion of not just those on the Right, but of all U.S. adults. This article (click on screenshot below) centers on both Bill Gates and the coronavirus, particularly a vaccine. The poll was conducted in May, and you can link to the main results by clicking on the screenshot below.

The most bizarre contention, debunked by Snopes, is that Bill Gates is using his money and promoting Covid-19 vaccinations to create an authoritarian country where everyone will be surveilled via the implantation of microchips (presumably inserted surreptitiously during vaccination).  As Snopes notes,

A primary focus of that foundation, and of Gates’ philanthropy in general, is the reduction of inequalities in health outcomes, with a focus on the developing world. Via these organizations, he also funds research into technological solutions to public health problems in the poorest communities globally. Since 2015, he has been raising alarms about the world’s potentially catastrophic lack of preparedness for a pandemic.

In part because of his advocacy for vaccines, Gates has also been a major recipient of the anti-vaccine movement’s vitriol for well over a decade. Years of manufactured animosity built by false claims from these anti-vaccine groups have, as the COVID-19 pandemic unfolded, combined with the dubious claims of doomsday soothsayers and cryptocurrency Youtubers to create a sprawling COVID-19 conspiracy theory centered on Gates.

The basic allegation against Gates goes like this: He is using the COVID-19 pandemic as a pretext to push a vaccine with a microchip capable of tracking you along with the rest of the world population.

Snopes debunks this, saying that Gates’s only remotely related argument is that perhaps people should have certificates of either immunity after having contracted the virus or after having been vaccinated, and those documents could be used for travel and entering new countries. Whether they will be required is up to the countries, not to Gates. That’s about it.

So that’s the basic allegation. How many Americans agree with it? See the chart below of the poll’s results, and weep copiously. 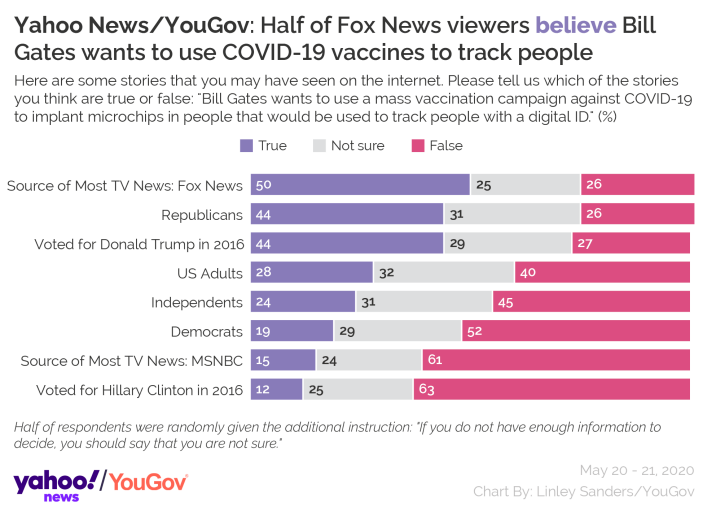 Yes brothers and sisters, friends and comrades, 44% of Republicans and 19% of Democrats—one in five Dems—accept this bizarre theory. Indeed, half of all those who get most of their news from Fox News accept the theory, while only 26% think it’s false. As expected, those who voted for Trump four years ago have statistics almost identical to those of Republicans in general. Those who are most sensible are the Democrats, those who get most of their news from the liberal station MSNBC, and those who voted for Hillary Clinton in 2016. But even the latter categories show more than a quarter of people saying that they aren’t sure whether the microchip implantation theory is true.

Why on earth does anybody believe such a palpably false myth, one supported by no facts at all? Well, for the Right, it’s tribalism, with right-wing tribalism going along with an antivaxer stance. It’s above my pay grade to dilate on why the right is so suspicious of vaccines given that many conservatives support them, but some how it’s taken hold. The Yahoo site gives details:

The new Yahoo News/YouGov survey shows that skepticism about a possible coronavirus vaccine is already taking root on the right. There is little partisan disagreement over vaccines in general: 83 percent of Americans consider childhood vaccines either “somewhat” or “very” safe, and more than 80 percent of Democrats, independents and Republicans share this view. The same goes for concerns over the safety of “fast-tracking” the vaccine through the typical research and regulatory process: 73 percent of Americans are at least somewhat concerned, with little difference by party affiliation.

But when it comes to actually getting vaccinated, Clinton voters are nearly 30 points more likely to say they will (72 percent) than Trump voters (44 percent). A majority of Trump voters say either that they plan to skip the shot (29 percent) or that they aren’t sure (27 percent), even though the president himself has been pushing hard for a vaccine.

As a result, only half of Americans (50 percent) now say they intend to get vaccinated “if and when a coronavirus vaccine becomes available,” with nearly a quarter (23 percent) saying they won’t — a 5-point decline in the percentage of “yes” responses and a 4-point gain in the percentage of “no” responses since the previous Yahoo News/YouGov survey two weeks ago. The rest (27 percent) say they’re not sure.

With 83% of Americans considering childhood vaccination safe, half of us still won’t get vaccinated when there’s a safe coronavirus vaccine. This is the downside of all the doubt sowed by the conspiracy theorists: it makes people less likely to get vaccinated. And this isn’t the same as ignorant suspicion of evolution or advocacy of flat-earthism, for doubt about tested vaccinations leads to sickness and death. There are no fatal complications of creationism.

There’s more misinformation and tribalism concerning—yes, you guessed it—hydroxychloroquine, which has been unproven as a virus preventive and seems positively harmful when given to those already infected. Have a look at this:

Vaccines are not the only subject of misinformation. Another example with dire implications is hydroxychloroquine. A majority of Fox News viewers (53 percent), along with nearly half of Trump voters (49 percent) and Republicans (44 percent), think the antimalarial drug is an effective treatment against COVID-19 — even though study after study has not proved that to be true. In fact, a new study of 96,000 hospitalized coronavirus patients on six continents found that those who received the drug had a significantly higher risk of death compared with those who did not.

Far fewer Trump voters, meanwhile, say that hydroxychloroquine is ineffective (just 17 percent) or that they are not sure (34 percent) — an upside-down perspective that may have something to do with the fact that the president told reporters Monday that he has been taking the drug for the last “couple of weeks” as a preventive measure.

The poll also found that a plurality of Trump voters (41 percent) say they would take hydroxychloroquine if it were available to them. Only 4 percent of Clinton voters say the same; 80 percent say they would not take the drug. The Food and Drug Administration has warned that hydroxychloroquine should be used only in clinical trials or hospitals because it can trigger fatal heart arrhythmia in COVID-19 patients.

Well, physicians who are responsible doctors won’t treat infected people with the drug, and I hope that they won’t write prescriptions for it as a preventive. But some will. The upshot is that trust in science in general will be eroded, as well, I think, as trust in vaccinations.

As we saw from the statistics above, the Left isn’t resistant to the blandishments of misinformation, either. For example, on the issue of “reopening” cities and states, we see this:

The left is not immune to picking and choosing its preferred version of events. Democrats (58 percent) are more likely than Republicans (33 percent) to believe that “coronavirus-related deaths have surged” in early-to-reopen red states such as “Florida, Georgia and Texas” — as are Americans in general (45 percent). Yet average daily deaths have declined in Georgia and Florida since reopening, while holding roughly steady in Texas.

The statistics for reopened states were given on the news last night, and, as the poll notes, they contravene the Left’s scenario that prematurely reopened states will suffer huge tolls from a resurgence of the pandemic. That hasn’t happened so far, and yet the Left believes it more than the Right. Again, tribalism. It is, of course, possible that these states will suffer another onslaught of the virus, and our best attitude should be a wait-and-see one.

There are a bunch of other results, all showing tribalism in belief about what’s true, even when we don’t have sufficient data yet (well, what did you expect in such a religious nation?):

But views on reopening are starting to diverge as well. Asked in previous Yahoo News/YouGov polls whether stay-at-home orders were the only way to stop the spread of COVID-19 or whether “the cure is worse than the disease,” majorities of Americans, both Democratic and Republican, said the former. Now for the first time, a majority of Republicans (53 percent) say the cure is worse. Among Trump voters and Fox News viewers, that number skyrockets to 59 percent and 66 percent, respectively.

On the right, nearly every question about reopening is trending in the same direction. Pluralities of Republicans (44 percent) and majorities of Trump voters (55 percent) and Fox News viewers (61 percent) now support the protesters demanding an end to lockdown measures. Wide majorities of these right-leaning groups also say they are more concerned about lifting restrictions too slowly than too quickly; most Americans — by a 61 percent to 39 percent margin — still say the opposite. And while 62 percent of Americans say they’re more worried about the impact of the coronavirus on people’s health than on the economy, the right disagrees: 63 percent of Republicans, 68 percent of Trump voters and 73 percent of Fox News viewers say they’re more worried about the economy.

This is going to cause another fractious election result, which we knew anyway. I still think Trump will lose, and have bet a few hundred bucks on that result; but I’m appalled at how many American continue to support a man who’s so obviously mentally ill—a narcissist of the first water—and how many still buy into his ridiculous statements. As I’ve said, I lived through the Sixties—through Nixon, Reagan, and W., but I never thought I’d live to see a President and an administration so dysfunctional. And, even worse, how many Americans support Trump. Do they really admire the guy, or are they using him as a cudgel against the Left and what it represents to them (lax immigration policy, more concern for racism, and so on)?

And I have no idea why tribalism has increased so much in the last decade or so. Even the Reagan years seem almost halcyon compared to the today’s seemingly irreparable divisions in the ideology of Americans. I’d be interested in hearing readers’ take on this.

Apropos, here’s a photo sent in by reader Barry: 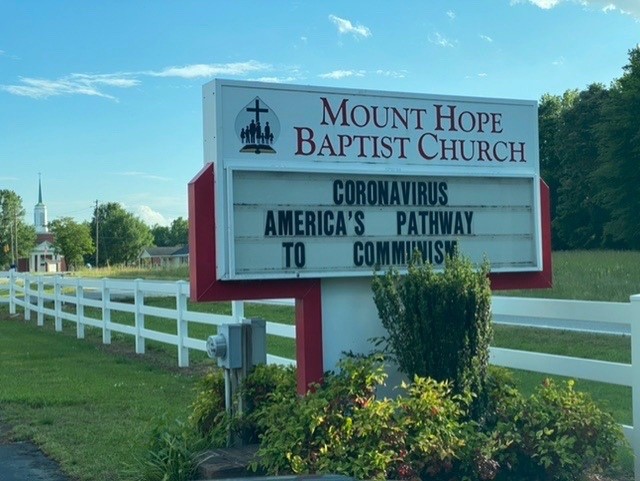 106 thoughts on “A large percentage of conservatives (indeed, of U.S. adults) subscribe to a bizarre Bill Gates conspiracy theory”