From Atlas Obscura we hear that during the 1918 “Spanish flu” epidemic, people also wore masks, but put masks on their cats too—something that’s guaranteed not to stay in place! Click on the screenshot to read:

A photo below and caption:

One image, dating from the years when Spanish flu rampaged across the United States, shows a unknown family of six, in Dublin, California, all wearing the standard mask of the time: “white and fastened around the head,” as Catharine Arnold writes in Pandemic 1918: Eyewitness Accounts from the Greatest Medical Holocaust in Modern History. A behatted woman holds a bouquet of flowers. And the family patriarch holds a tense-looking masked cat under his arm, like a loaf of bread. Faint wrinkles under the cat’s right ear show where the gauze is bunching up, and a faint shadow marks the spot of its triangular nose. 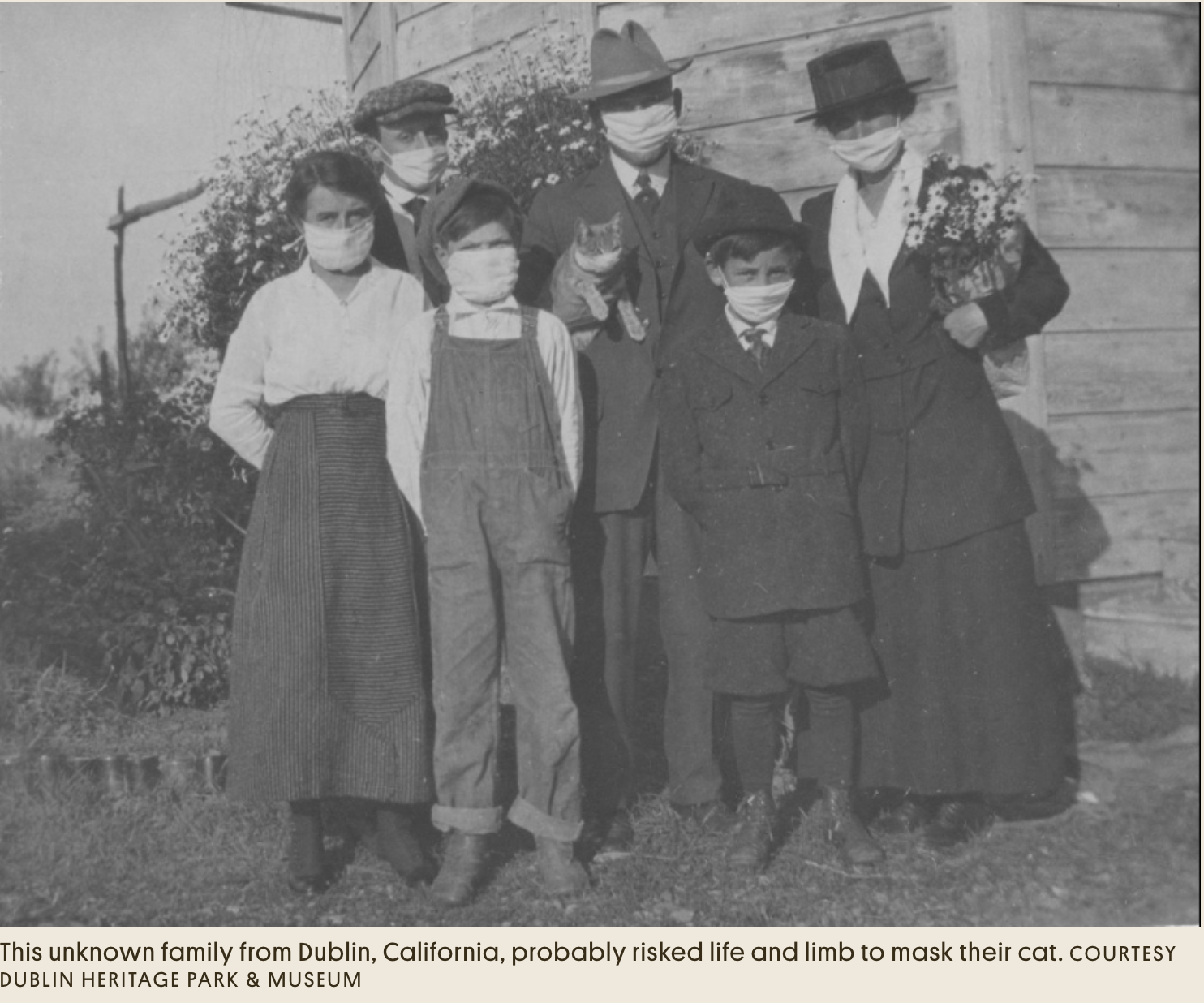 The photos inspired worldwide hilarity, and perhaps they were meant to—it’s hard to imagine a cat actually putting up with a face mask for any significant amount of time. Humor may have been a motivation for photographs of masked pets from the early-20th century, as well. The families and friends in these images may have felt fear, apprehension, or even the weight of history on their shoulders. Putting Puss in a mask probably would have lightened the mood.

But there was genuine fear that pets could carry Spanish influenza. In Allentown, Pennsylvania, one councilman insisted that dogs and cats were responsible for the spread of the illness, proposing that they all be killed or at the very least shaved to prevent more infections. In Phoenix, it was rumored that dogs could carry influenza. Police killed strays, while some people killed their own pets. According to the U.S. Centers for Disease Control and Prevention, some influenza viruses can pass from certain birds and mammals to humans, though it’s rare for them to directly make the jump to people.

And one more, again cats wearing masks that no cat would tolerate:

According to Tyler Phillips of the Dublin Heritage Park & Museum, the identity of the family of six was who posed with their cat a century ago is unknown. The same is not true of another photo, taken in 1918. In it, five women and two cats sit on a porch. All of them are wearing masks. The names of the women and the cats are listed on the back: “Top row, Anna Kilgore, E.K. Barr, Ms. Anna S. Shaw. Lower row, Penelope and Tommy, Mrs. Shaw and Golly.”

The photo is part of the collection of Dan Eskenazi, the curator of Seattle’s Giant Shoe Museum. Eskenazi’s friend Pat Dorpat, a columnist and historian, found that four of the five women lived together in a still-standing house on 43rd Street in the Wallingford neighborhood of Seattle. One can imagine the ladies—bored roommates during a seemingly endless epidemic—trooping outside in their glorious hats, then slipping the inglorious masks over Tommy and Golly’s heads. The photographer who snapped their photo captured a moment of levity in the middle of a scourge.

DO NOT TRY THIS AT HOME! 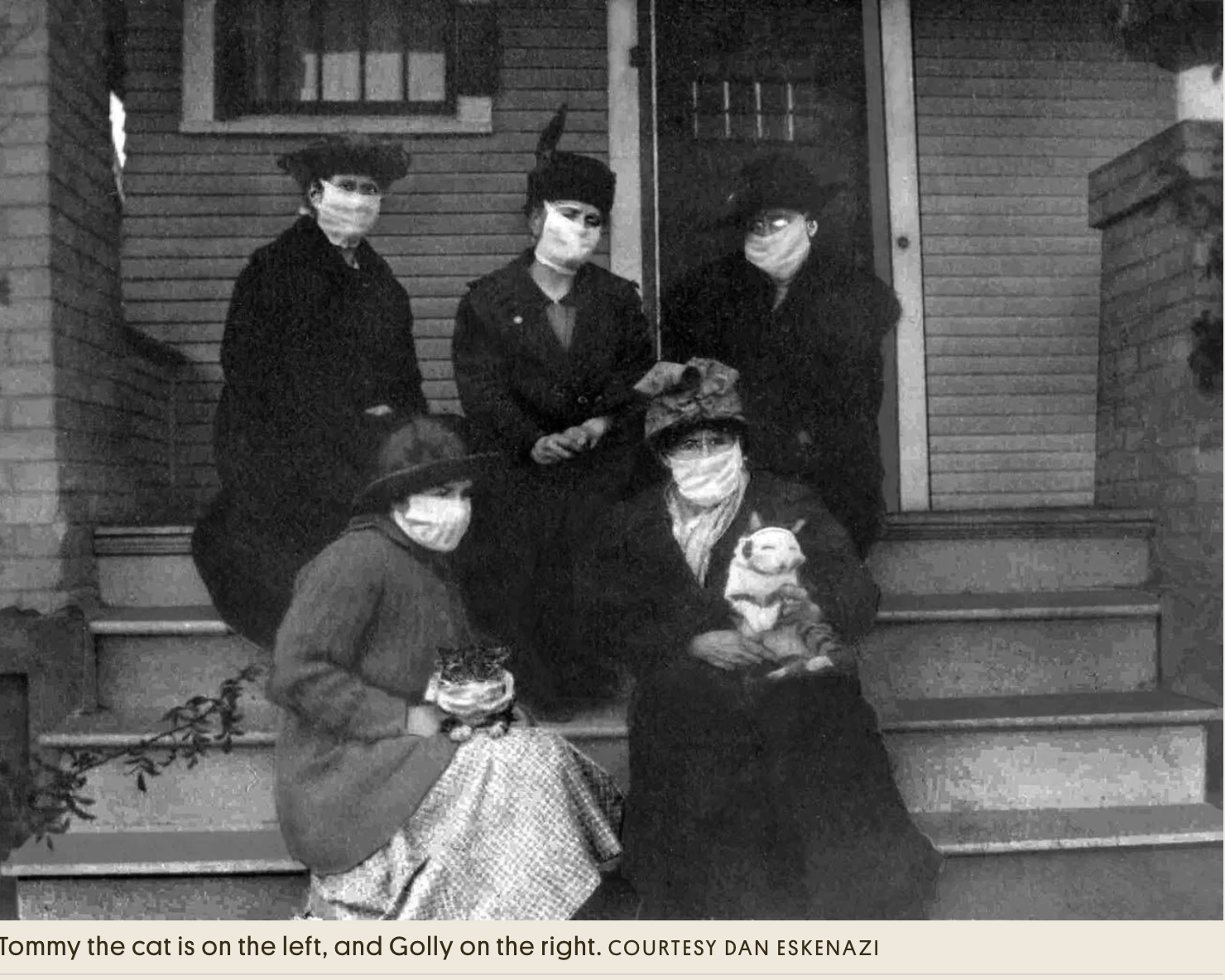 From Bored Panda (sent by several readers), we have a man who has the maximum love for his kitties:

Cats are natural-born climbers and most of them enjoy being in high places. Whether it’s a high shelf or the top of the refrigerator, kitties feel really comfortable in the upper half of the room, keeping an eye on the surroundings below them with greater confidence.

Recently, Rob Coutu from Windsor, Connecticut, decided to embrace these instincts of his cats and built them two epic towers. The well-crafted structures provide them with both comfort and entertainment, and his little furballs are absolutely loving them. 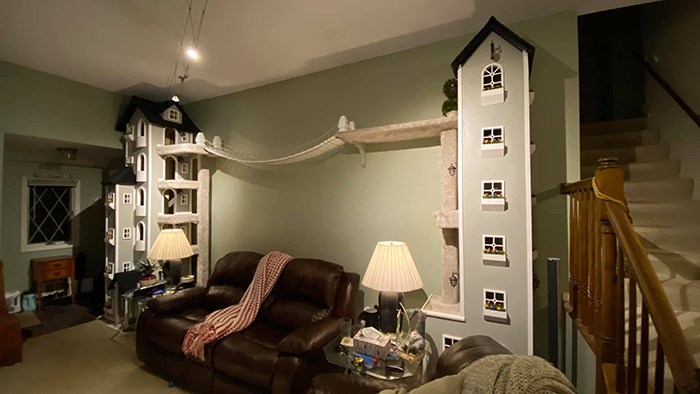 “I have two cats, a red tabby and a Savannah cat,” Rob introduced his pets to Bored Panda, adding that the Savannah likes the towers so much, he has taken over both of them and doesn’t want to let the tabby use them.

Well of course savannahs are half wild and need to leap and run, so this is no surprise.  Here are some other photos: 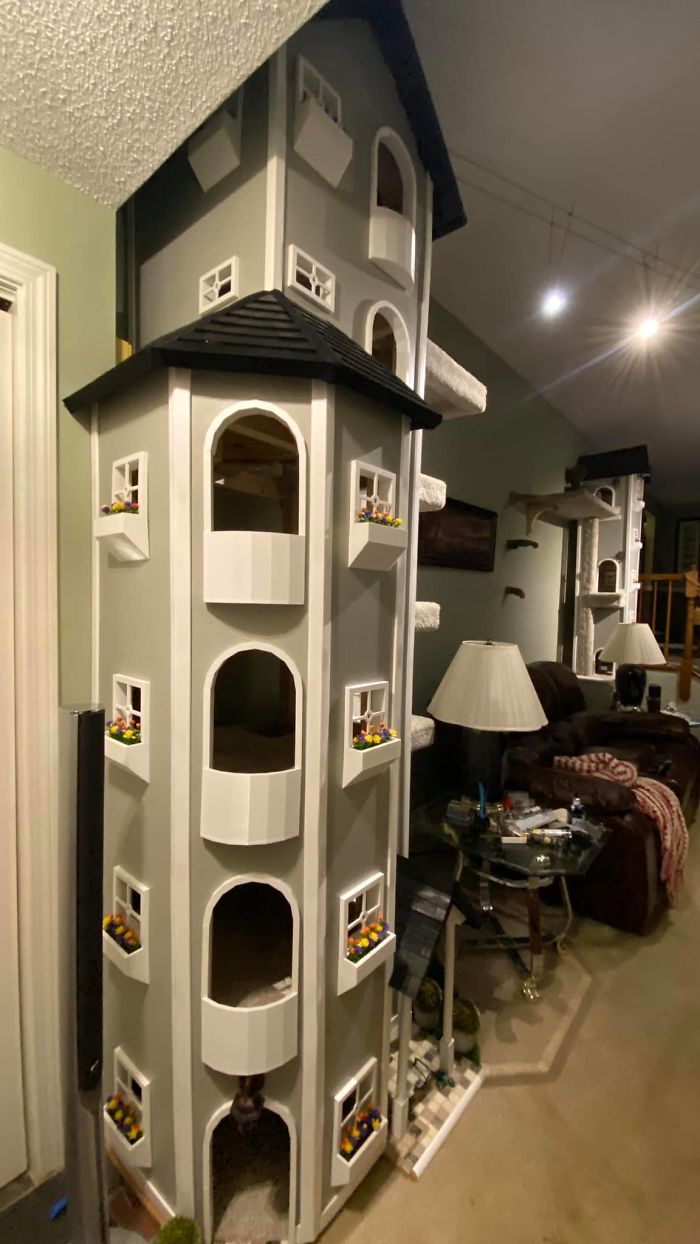 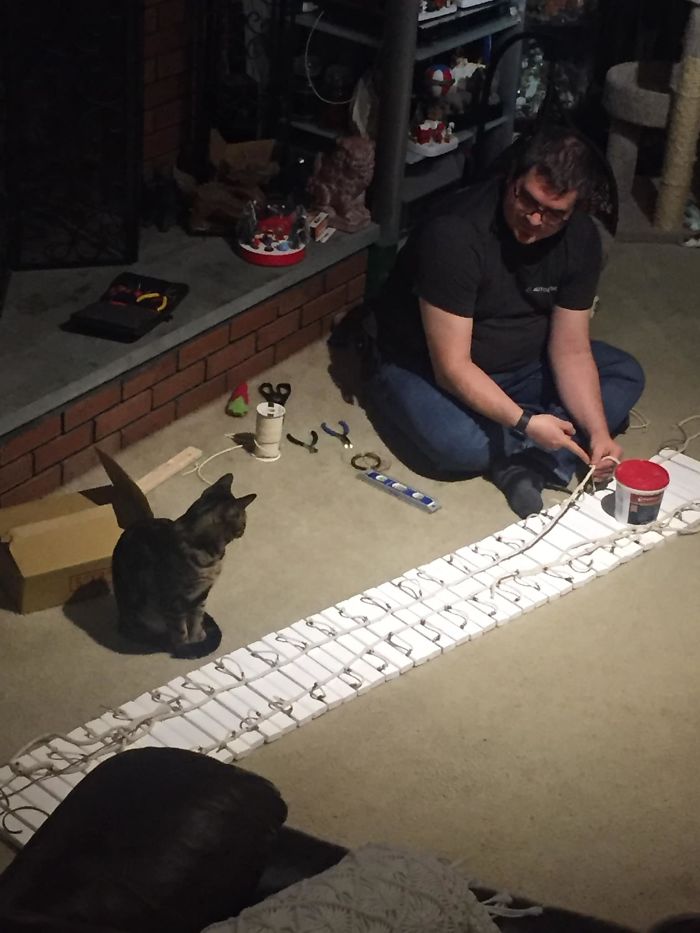 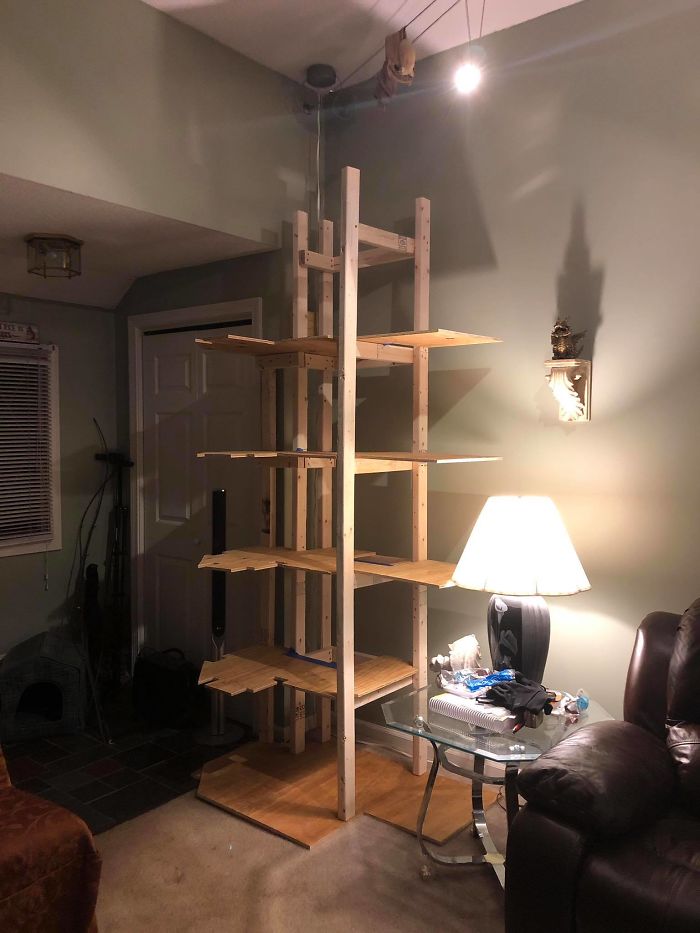 Well, the savannah is happy, but not so much the tabby!

This is adorable: a cat brings slippers to its owner every morning—not just one slipper but both of them! How cool is that? Click on LoveMeow screenshot below to read and see video: 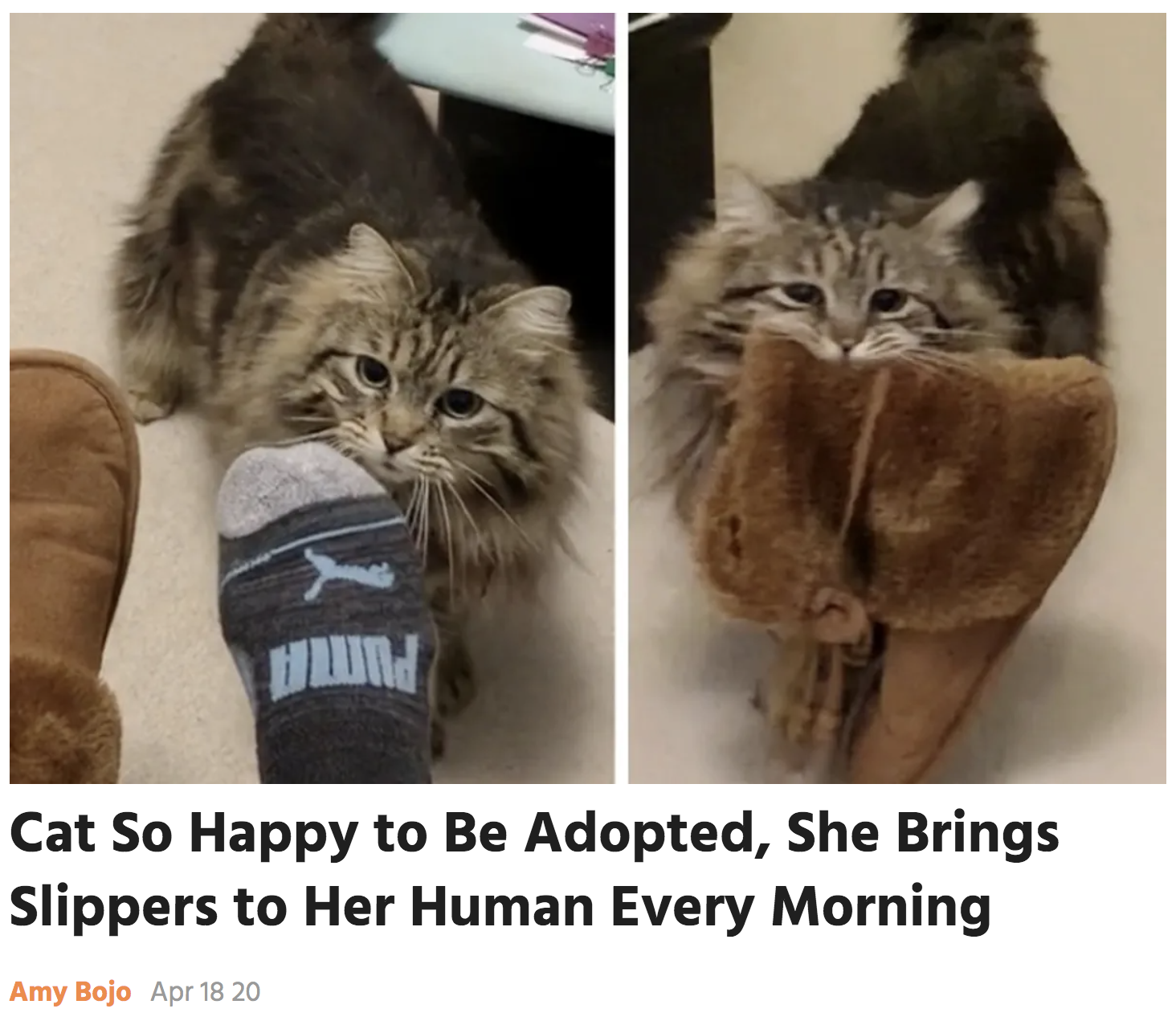 Lulu the cat was brought to a shelter in poor shape. She was covered in matted fur and had several health issues. After a year in shelter, the tabby cat found herself yearning for the right family to come.

That’s when she met Kayla’s mother, who was looking to bring home a new addition. “I tried to convince my mom to get a kitten but she clearly knew what she was doing,” Kayla shared on reddit. “(Lulu) had been in the shelter for a year and no one wanted her because she had health problems.”

At around 10 years old, Lulu kept getting overlooked. “She has kidney disease, and also has ingrown nails from being in too small of a cage. She couldn’t even jump when we first got her….”

Look at this sad bedraggled kitty! But it got better when it was adopted and became a beautiful fluffly moggy: 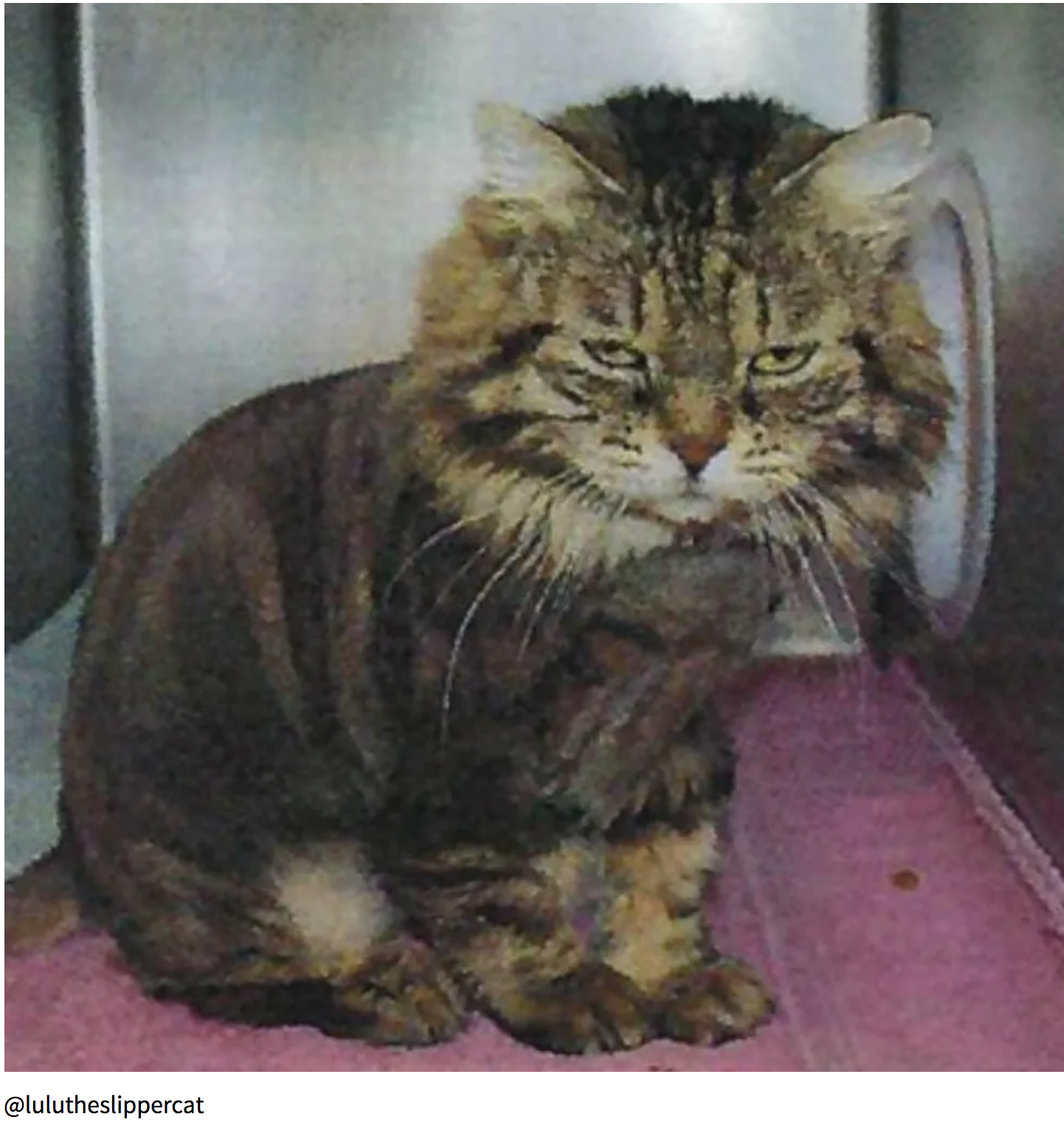 They met the sweet tabby and knew right away that she was the one. After filling out the paper work, Lulu finally left the shelter for her new abode. Over the next few months, the sweet tabby grew back her luscious, fluffy coat, regained so much energy, and could run and jump just like any other cat. 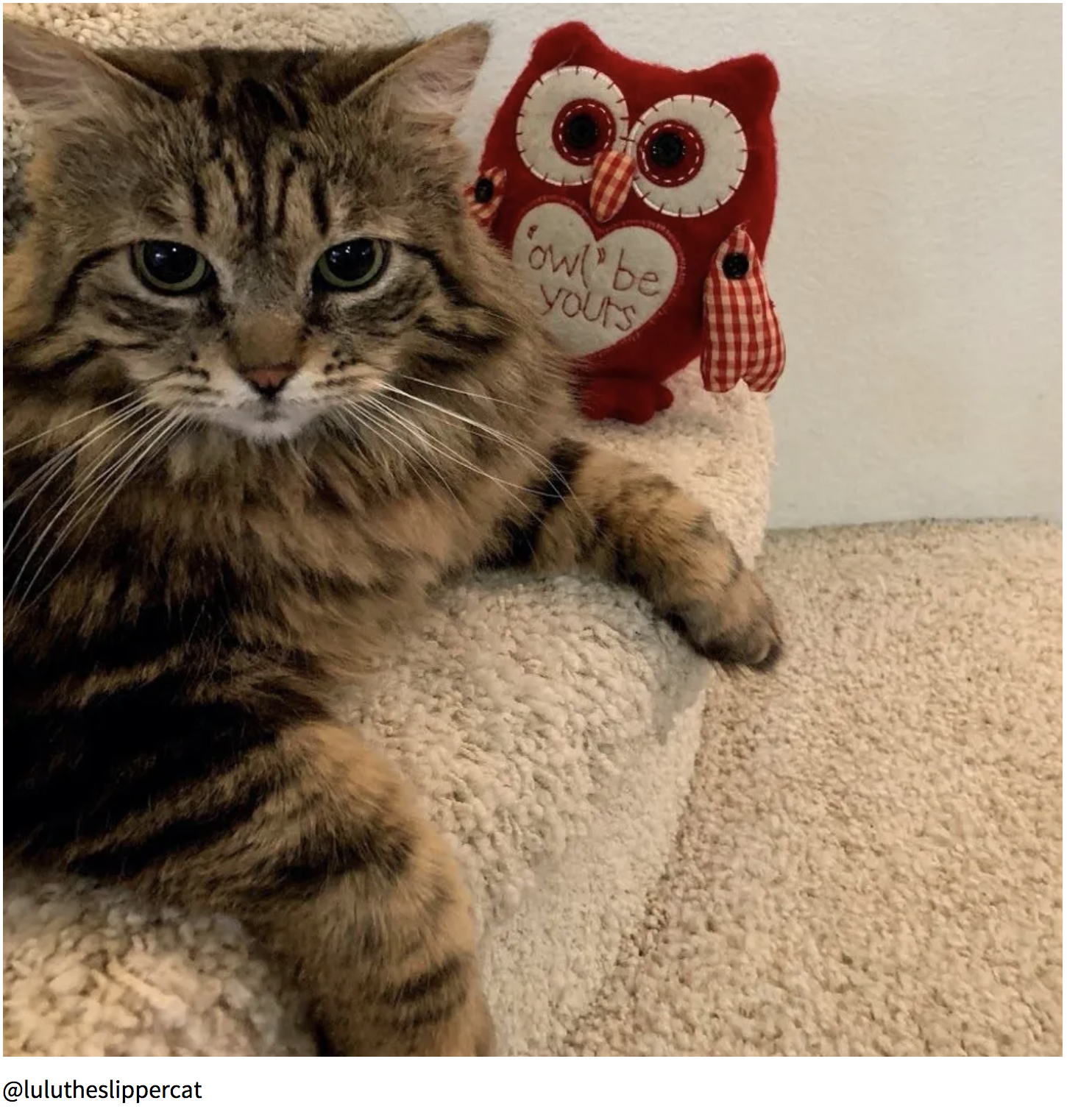 One morning, Kayla’s mother woke up to the cutest little surprise.

Lulu carried her slipper all the way to her bed. She dropped it right in front of her while chirping aloud with so much pride. She then went back to get the other slipper.

Since then, it’s been a cute little morning routine for Lulu to collect slippers for her human mom and bring them to her feet. She makes two trips to ensure that both slippers are safely delivered. Nothing will stop her, not even the stairs.

Click on the screenshot to see the videos, and don’t miss these! 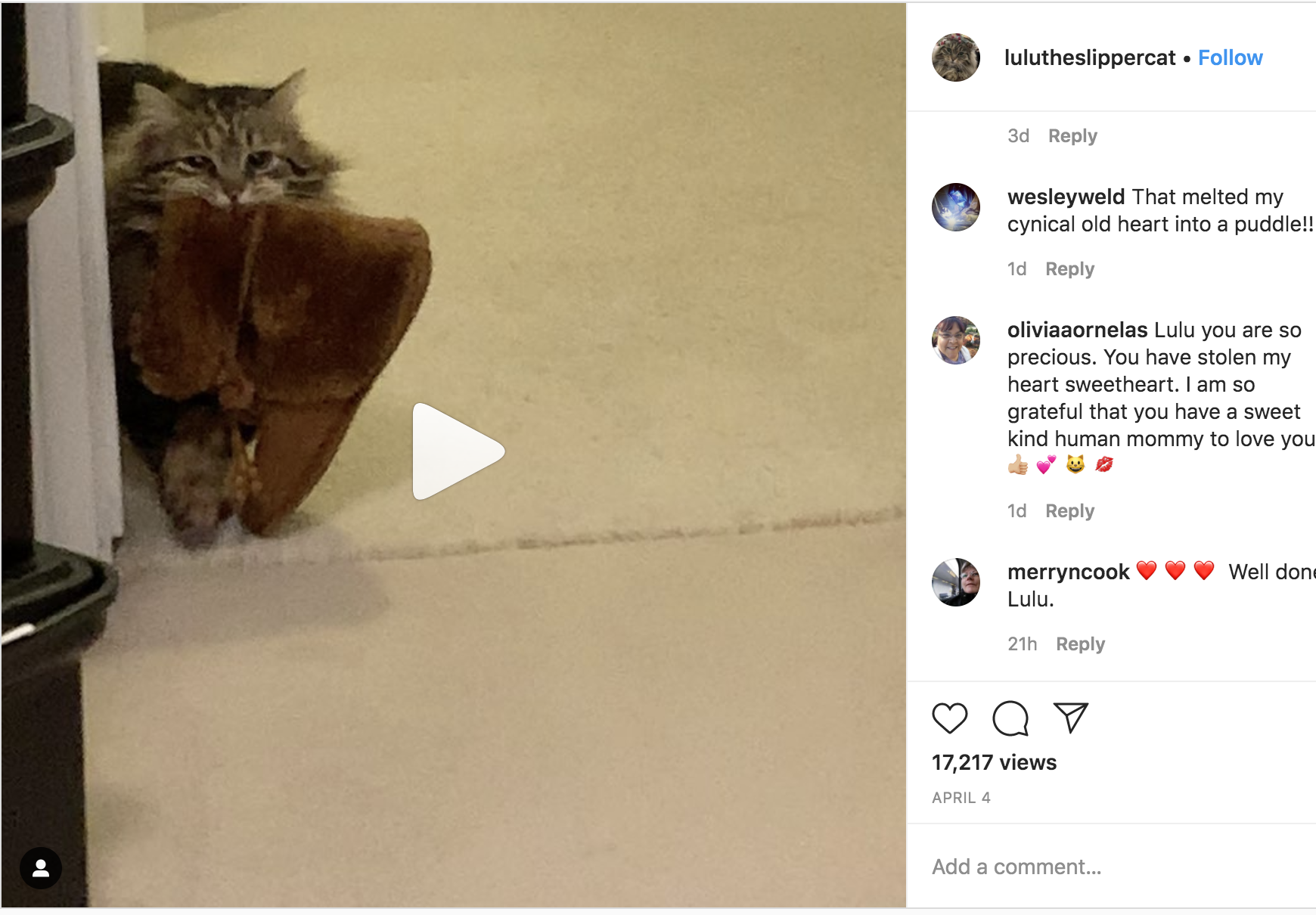 Kayla was stunned when she learned about Lulu’s adorable quirks. “I didn’t believe (my mom) until she got it on camera finally,” she wrote.

Lulu brings one slipper to her human, and always goes back to fetch the other one. 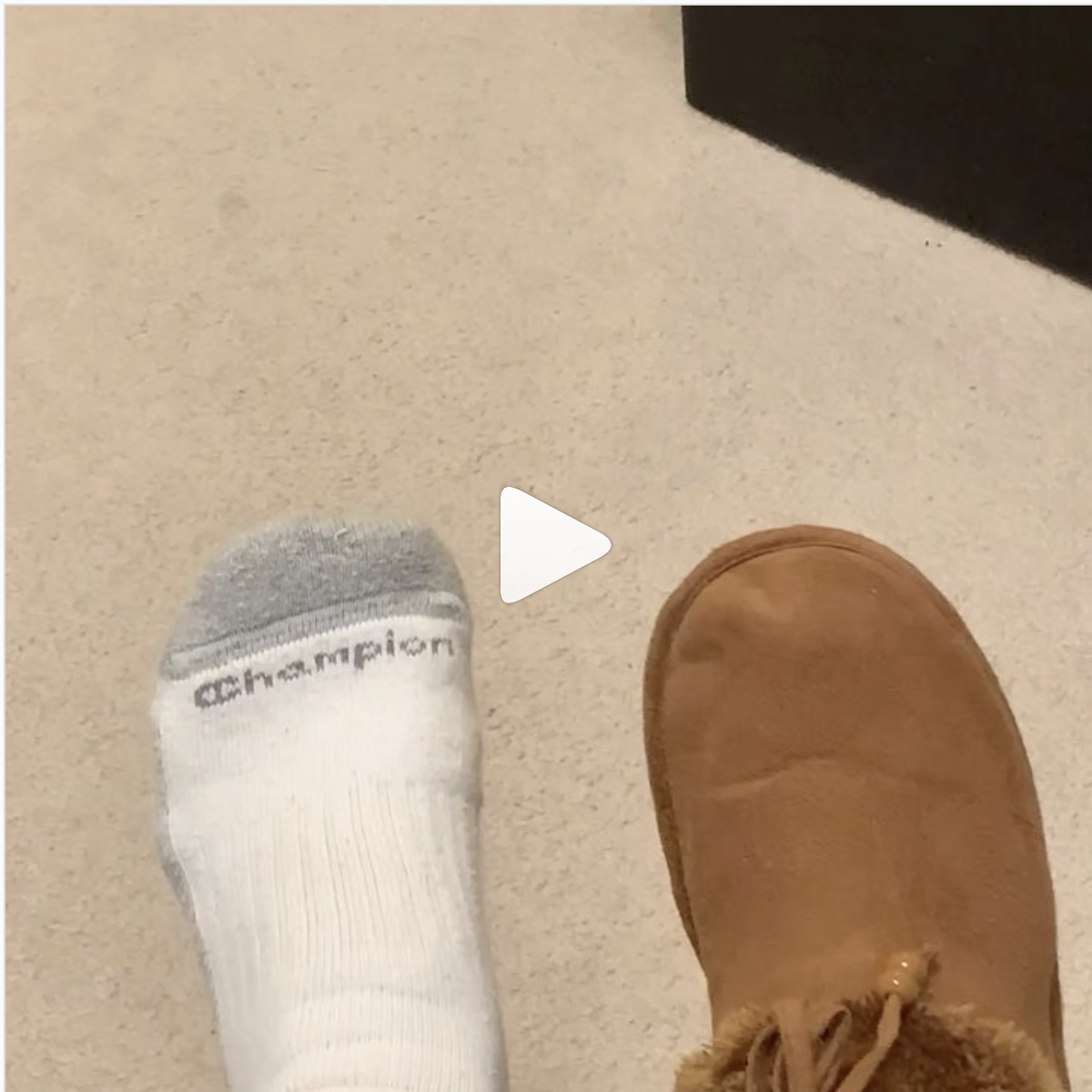 Lulu loves it when her mom works from home. She can’t wait to start her day with her favorite human in the world.

She carries the slipper proudly in her mouth as she walks into her human’s room. 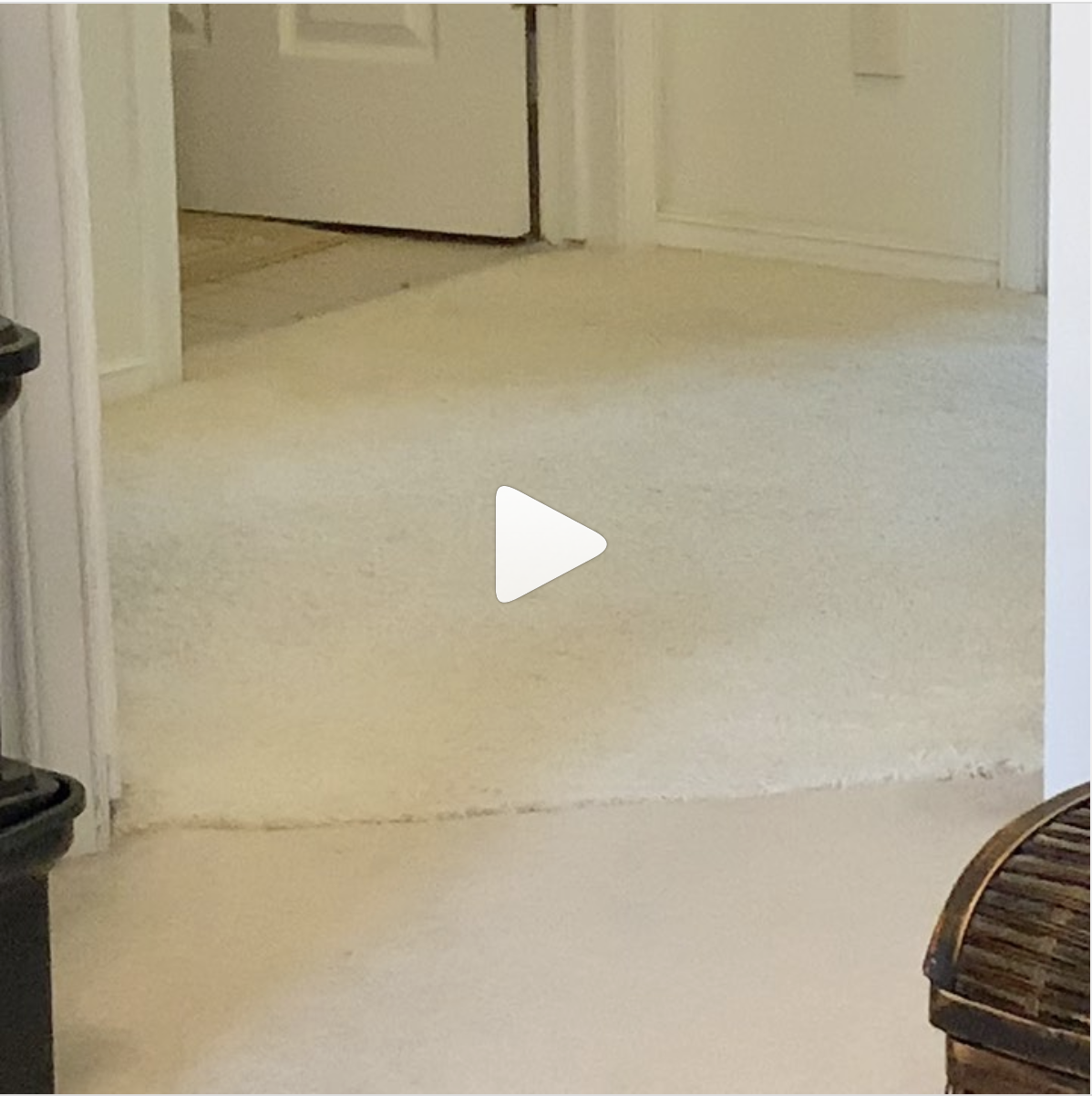 And a cry of triumph at the end: 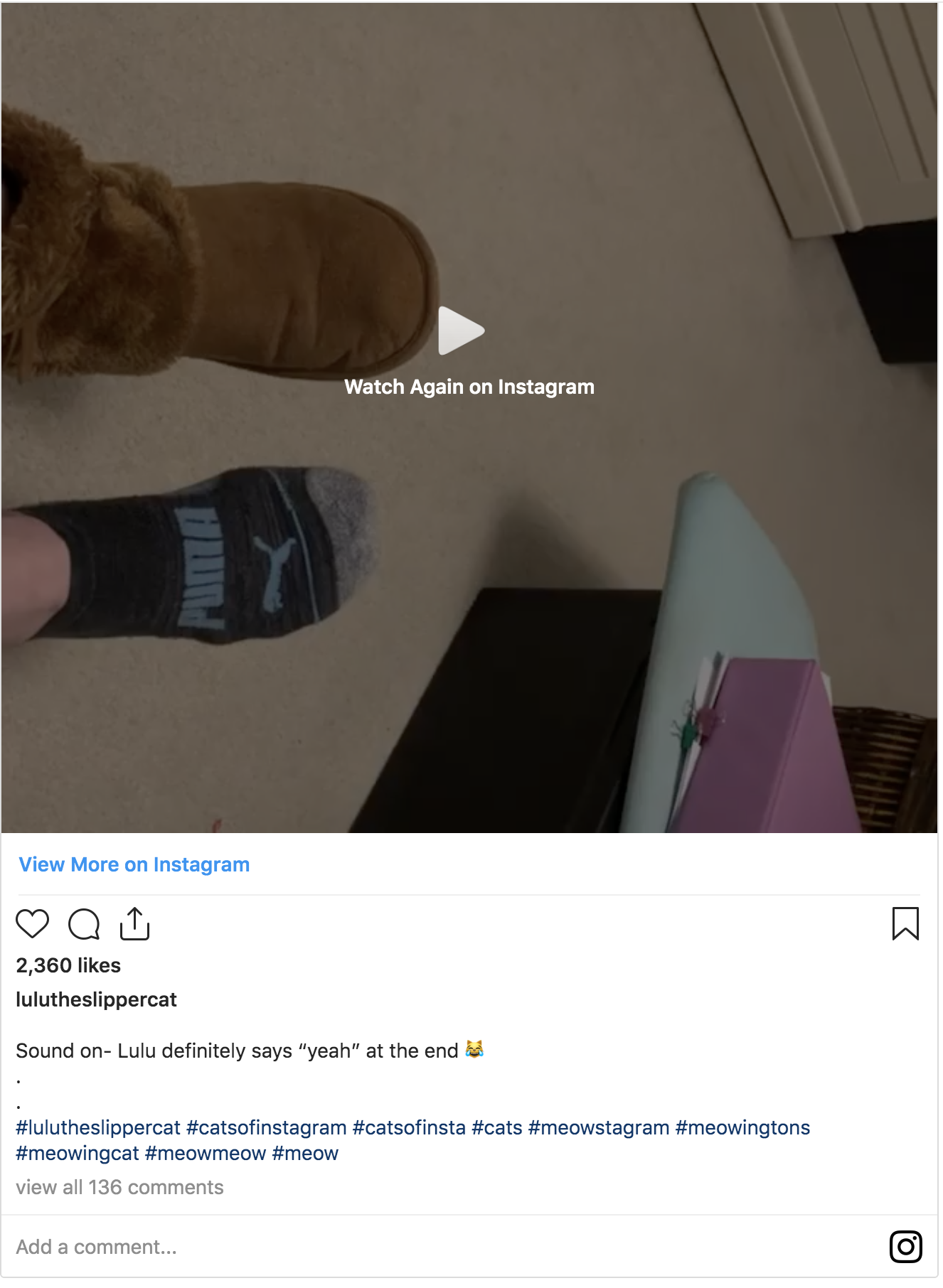 In one way it’s a d*glike cat for sure, but it doesn’t need to be taken for a walk, nor have its staff pick up the poop!