Over the years, two slightly salacious stories have circulated about me among evolutionists, and over time they’ve been combined into one story that was sometimes used to introduce me when I gave scientific seminars. Many of my pals don’t mind embarrassing me this way, and I reciprocate. It’s all in good fun.

But I want to set the record straight by recounting both stories separately, and tell you how they’ve been merged into one fallacious story.

Story 1.  Many of Dick Lewontin‘s grad students worked late in the evening. We’d all go out for the 99 cent student dinner special at Charlie’s Beef and Beer on Massachusetts Ave (the restaurant is no longer there), and then return to the lab for a few hours. One night there was just two of us working late: Russ Lande (now a famous evolutionary biologist) and I.

Lewontin designed his lab on communal (if not Communist) principles. There was a huge central room with a long map table that Dick had gotten from the remains of the defunct geography department, surrounded by a circle of offices, each containing two people. The idea, which was a good one and worked well, was that to get to your office you’d have to walk past the big table, where people might be having coffee, eating lunch, or just chewing the fat. Dick’s office was next to his secretary’s office (his was bigger because some animals were more equal than others) and to Russ’s.

Two more points: Dick always left his office door open, even when he left for the evening. Part of this was simply so we could walk in and talk to him during the day if he wasn’t too busy.  Also, Dick almost never came in in the evening. A devoted family man, he went home to his wife Mary Jane about 5 p.m. and didn’t return (he also had four sons, but they were in college or grown). I remember him telling us once “I have to leave: Mary Jane has a duck in the oven.”

So, one night at about 8 or 9 pm, Russ was working in his office and I in mine. All the offices had glass doors so you could see in. I decided to play a prank on Russ: I would strip to the buff and then run at his closed door, flattening myself against it and screaming like a banshee. I was hoping to scare the daylights out of him. I decided to go into Lewontin’s office right next to Russ’s, remove my clothes, and then streak out and flatten myself against the outside of his door.

I went into Dick’s office, turned the lights off, and removed my clothes.

When I was standing there stark naked, ready for The Big Streak, suddenly the light switch was flipped on.  Dick was there! It was one of those very rare nights that he came in, almost certainly to retrieve something.

Imagine the situation: The Boss (Dick’s nickname) was standing there, and I was naked in his office. There are few interpretations that one could make that aren’t unsavory, if not perverted! At least I was alone, but one could still construe some sort of bizarre intent on my part.

But I quickly explained to Dick what I intended to do, and, Ceiling Cat bless him, he understood. He left, and I don’t remember whether I ever pulled that prank on Russ.

Story 2. This actually preceded story 1, but has become conflated with it.  As I explained yesterday, the MCZ labs, where Dick designed his lab, was new, and they were building his space on the third floor while we occupied cramped spaces on the first floor (later to be occupied by the ichthyologist Karel Liem and now George Lauder). But we got to go up and look at the third-floor space under construction and choose our future offices. I picked mine out, and, at the time, had a new girlfriend.

As is the wont of young randy males, I decided that I would “christen” my future office by spending the night there with my new inamorata. We got a pair of sleeping bags, did the christening, and then fell asleep—soundly and for the rest of the night.  In fact, we were woken up the next morning by the construction crew building the lab, who found a pair of humans largely divested of clothing. I didn’t know this, but the workers reported it to their boss, a man named Charlie Atlas (I am not making this up).  Atlas had a talk with Lewontin, who then called me into his office for a paternal “chat.”

Dick is pretty laissez-faire about such things, and he told me this, “Jerry, if you want to blow in someone’s ear at Harvard, be my guest. Just don’t do it in the lab.” And that was the end of that.

Well, not completely, because Story 1 and Story 2 became conflated into the false story which I’ll call Story1/Story 2. I’ve been introduced with that conflated story more than once.  It goes like this: “Jerry was caught by his boss Dick in flagrante delicto on top of Dick’s desk.”

Now THAT is a salacious story, but it’s false.  And don’t you believe otherwise, though I think I’m past the days when these stories would be used to introduce me before a talk.

Here’s a photo when Dick was doing field work with some colleagues in Death Valley, work that I took up and continued for several years as a postdoc: Left to right: Theodosius Dobzhansky (taken to observe the site), Steve Bryant (kneeling), Dick Lewontin, Steve Jones (looking fierce with a moustach) and Tim Prout, my postdoc advisor. 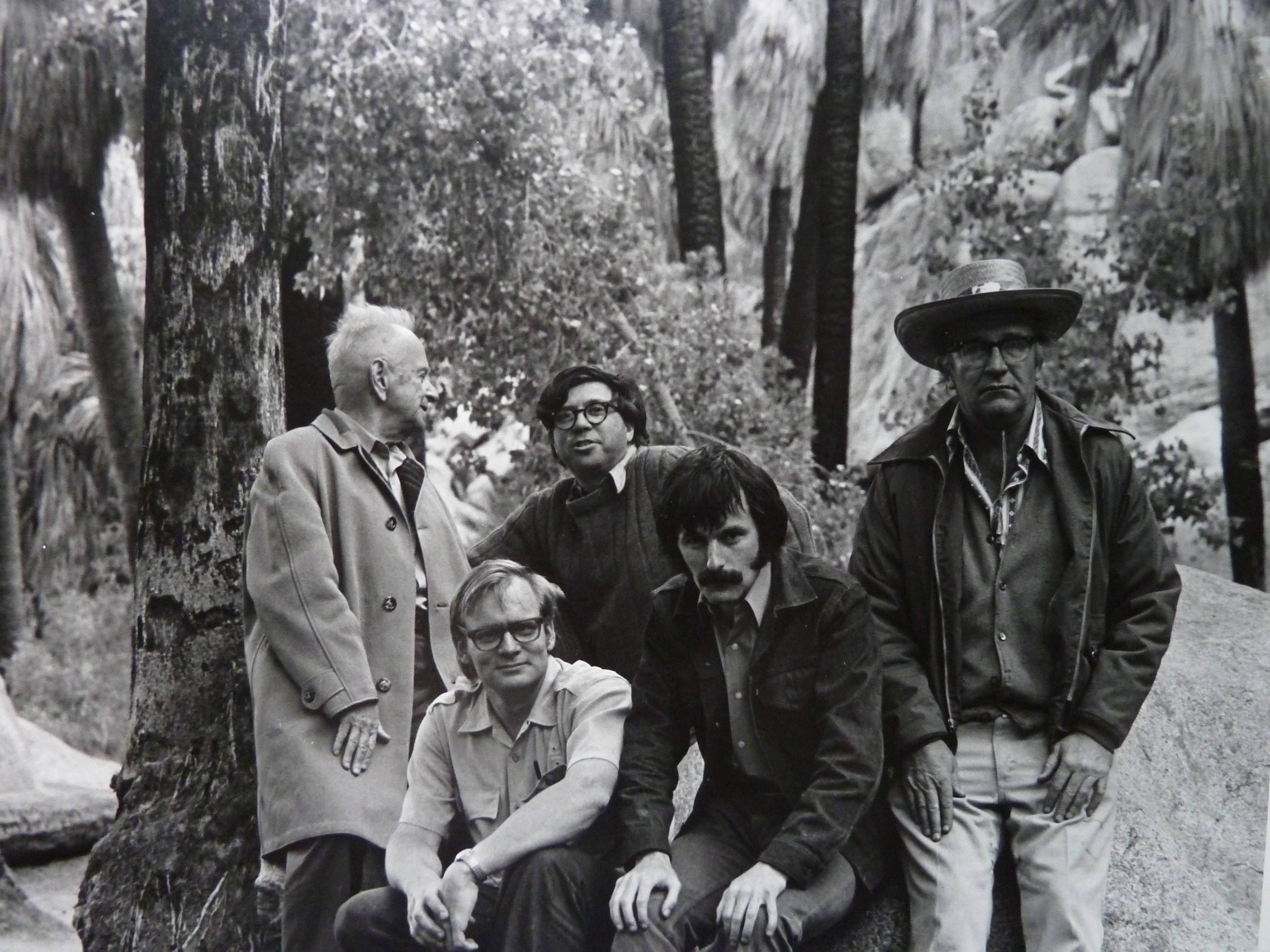 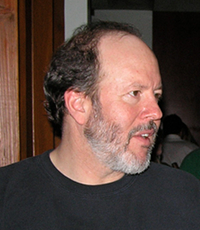 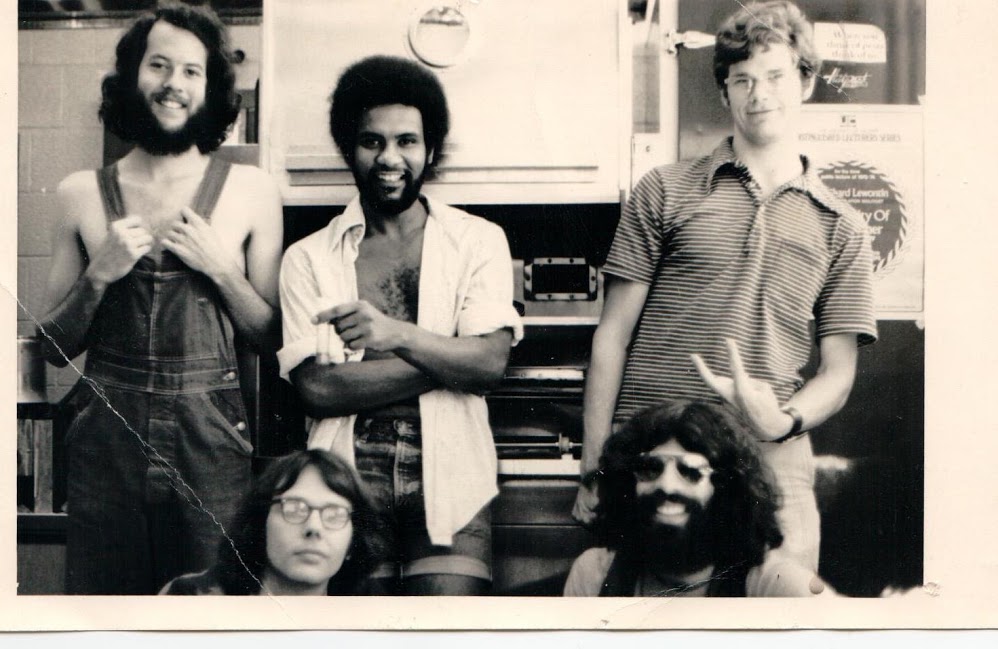 At the big center table with Lewontin’s writing on the blackboard. Left to right: Rama Singh, Ann Litke, Donal Hickey, and me. Ann is holidng up vials of flies, and there’s a tray of them in front of me. 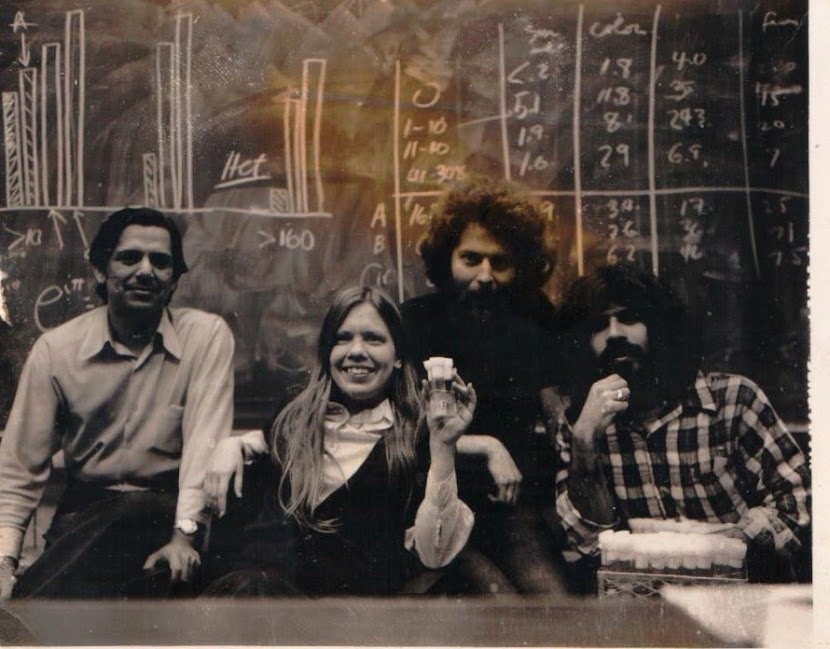 You can see more photos from my time in the Lewontin lab here.

I also have a story about how I climbed Mount Lewontin (a hill in Death Valley) without clothes (we didn’t need oxygen, so to make a first ascent without something, it had to be clothes and not oxygen).