The morning was stressful, with marauding drakes attacking Dorothy and driving her off the nest repeatedly. That left the brood alone, peeping piteously. They even attacked her on the island with her brood, making her fly off, and they did an aerial chase with her trying to get back to the pond without being attacked. I was impotent to do anything to help.

The malefactor drakes finally left about noon, and Dorothy and her brood of ten (they all survived) finally got fed and enjoyed a swim and a preen in the sun.  Wingman and his buddy are also in the pond, but he didn’t let the buddy get close to Dorothy (he’s very protective). So, for the time being, she and her brood are ok, spending the night on the duck island.

Honey flew to the pond late in the afternoon, which was odd given that she’s ready to jump, and I took that opportunity to peer at her nest. It was full of ducklings ready to go. But when I got down to the trampoline, one of her ducklings was on the ground. It did not jump because I peered at the nest, because a friend was watching below the nest, and found the duckling before I pulled the window screen to look at Honey’s babies.

I took the duckling and put it on the ground and backed off. It peeped piteously, and Honey quacked and looked at it. I hoped that that would induce her to drop with the rest of the brood, but no dice—she’s back on the nest, probably for the evening. (A friend is watching for a few hours so they can lead her to the pond should she jump. But that’s unlikely as they usually jump in the morning.)

So I put the duckling in a box that I’d prepared (I thought something like this might happen), and now have it at home, next to a warm radiator and with a small lid of water and duckling food.

Tomorrow Honey’s brood will surely jump en masse, and I hope to be there to lead them to the pond or at least walk with them. I will also have the issue of reuniting this duckling with its brothers and sisters. That should not be much of a problem since she knows her mother’s call.

I have pictures, and they’re adorable (also many pictures and videos of Dorothy’s brood), but right now I just wanted to fill people in. In short, we have all ten of Dorothy’s brood on the pond, safe for the moment and well fed. Honey’s should, Ceiling Cat willing, be on the pond tomorrow morning if she can lead her babies to the water. Then, if I can reunite this duckling with its brothers and sisters, all will be well—for the time being.

It’s been a day full of anxiety, and I’m drained. Tomorrow at this time we’ll know if everybody is well and good in the pond.

Here’s an iPhone photo of my charge this evening: 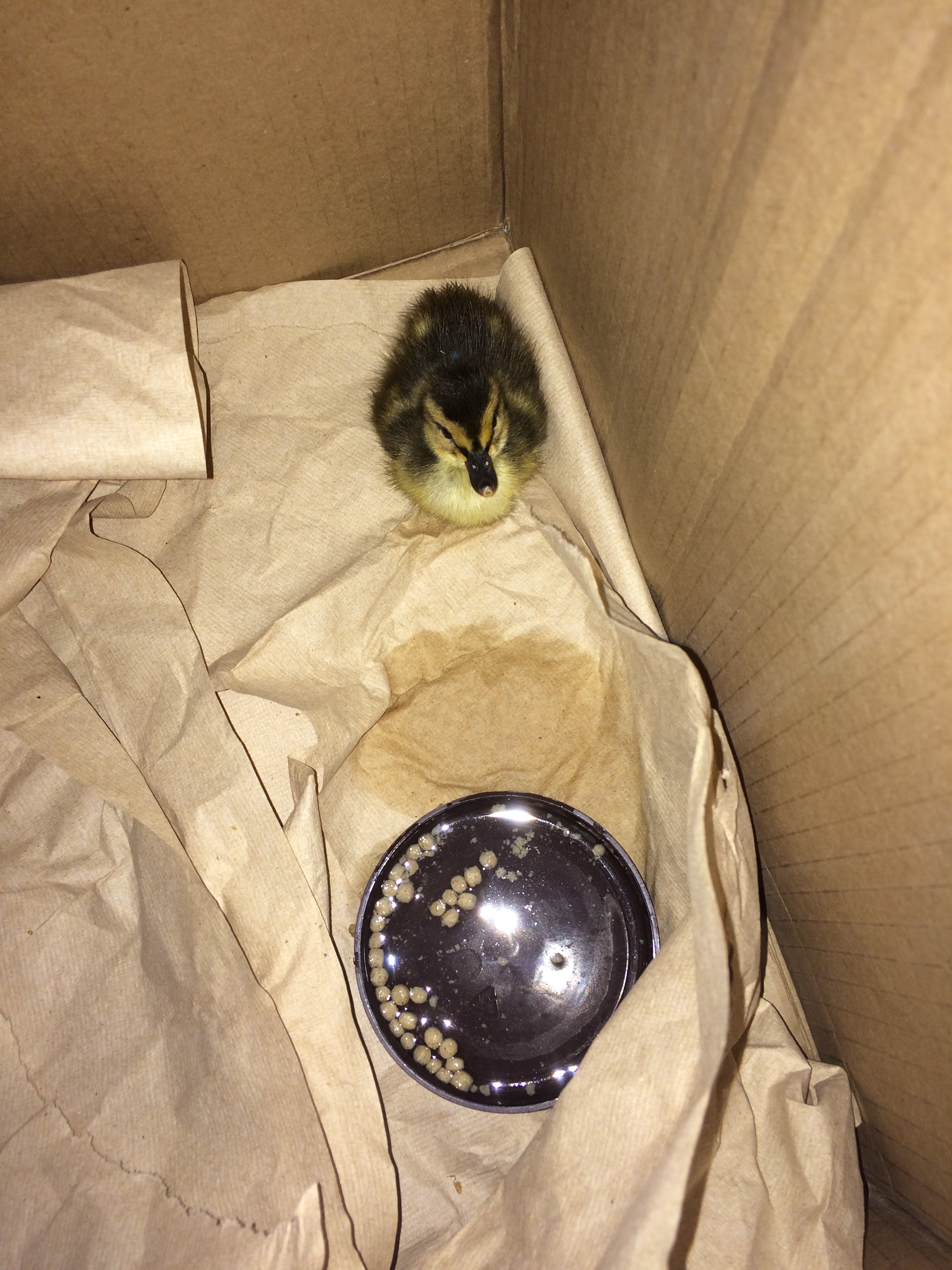