Does prayer work to cure diseases? Anecdotal evidence from Lourdes, where amputees and the eyeless aren’t cured, suggest not. And we all know the results of the Templeton-funded study of the effects of intercessory prayer on recovery of cardiac patients, the most thorough study of intercessory prayer yet, involving over 1800 patients (Benson et al. 2006). Those results: no effect of prayer; or, as the study notes:

In other words, the only effect even close to being statistically significant was that patients who knew they were being prayed for had more complications than patients not prayed for. Prayer worked in the wrong direction! That must have disappointed Templeton!

Further, a 2006 meta-analysis of 14 studies of medical effects of intercessory prayer showed no significant effects overall. The results and conclusions are in a red box below; note that the authors advise “that further resources not be allocated to this line of research.” (Click on screenshot to go to the study.) 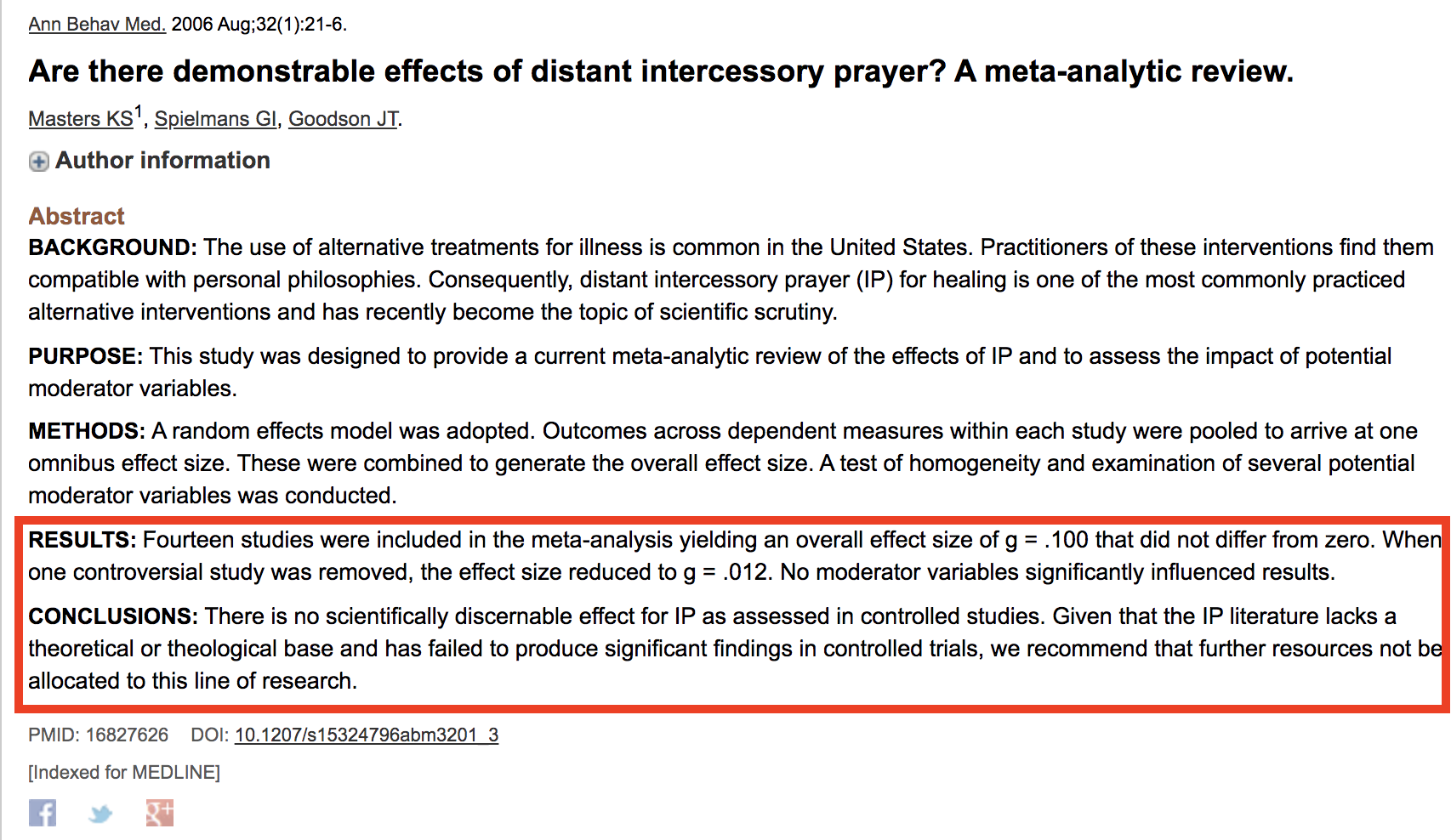 But someone disagrees about there being no more need for research: Dr. Dhanunjaya Lakkireddy, a cardiologist at the Kansas City Heart Rhythm Institute. Lakireddy is doing a double-blind study of the effect of intercessory prayer on the mortality rates (and other indices of “being cured”) from Covid-19. NPR, which always has a weakness for the numinous, highlights it in the article below (click on screenshot):

There’s no audio yet, but the site says there will be. UPDATE: The online version is here, and it’s short (2 minutes) and not the same as the transcript. But there’s little difference between them.

Lakkireddy plans a study of 1000 patients in intensive care with Covid-19. Lakireddy is a true believer, and it shows in his comments to NPR (below). The emphases are mine.

“We all believe in science, and we also believe in faith,” Lakkireddy says. “If there is a supernatural power, which a lot of us believe, would that power of prayer and divine intervention change the outcomes in a concerted fashion? That was our question.”

We believe in faith? What does that mean? Faith is belief—belief without strong or convincing evidence! Perhaps Lakkkireddy means he believes that faith can cure, which is what he’s testing. But saying that we “believe” in science is a bête noire of mine, and bothered me enough that I wrote an article in Slate arguing that “faith” in science really means “confidence in the reliability of the methods and its outcomes”, not “blind adherence to unevidenced claims,” which is what religious faith is.

But wait! There’s more! Lakkireddy, who has dipped his toes into several faiths, and clearly has a weakness for the numinous, goes on:

The investigators will assess how long the patients remain on ventilators, how many suffer from organ failure, how quickly they are released from intensive care and how many die.

Lakkireddy describes himself as “born into Hinduism,” but he says he attended a Catholic school and has spent time in synagogues, Buddhist monasteries, and mosques.

“I believe in the power of all religions,” he says. “I think if we believe in the wonders of God and the universal good of any religion, then we’ve got to combine hands and join the forces of each of these faiths together for the single cause of saving humanity from this pandemic.”

He already knows that religion will help with the pandemic! Is this the right guy to conduct a double-blind study on Covid-19? He has an interest in the outcome, of course, but one can only hope that he’s being supervised by other people to ensure rigorous, double-blind methodology. But wait! There’s still more!

Scientific studies of the power of prayer have been attempted before. Lakkireddy’s description of his study lists six previous clinical trials involving religious intervention. Some showed slight improvement for patients receiving prayer. Other studies have found no significant prayer effect.

Note that the “other studies” links to the meta-analysis above: a summary of ALL studies, and a summary that shows no effect of prayer overall. As far as I can see, previous studies cited by Lakkireddy were already incorporated into that meta-analysis. Shame on NPR for pretending that a meta-analysis of 14 studies is the same thing as a group of studies.

Lakkireddy says he can not explain how people praying remotely for someone they don’t know (or a group of people,) could actually make a difference in their health outcomes, and he acknowledges that some of his medical colleagues have had “a mixed reaction” to his study proposal.

“Even from my wife, who’s a physician herself,” he says. “She was skeptical. She was, like, ‘OK, what is it that you’re looking at?”

Lakkireddy says he has no idea what he will find. “But it’s not like we’re putting anyone at risk,” he says. “A miracle could happen. There’s always hope, right?”

Yes, there’s always hope of a miracle. But given the meta-analysis above, which recommends that “we should stop this nonsense”, there are no data to give us hope. There are data to give us no hope. And hope is really something that should not be entertained by a principal investigator, for that gives rise to confirmation bias. You could, for example, do p-hacking, hoping that at least one outcome will be in your favor, reaching statistical significance.

You can learn more about Lakkireddy’s study at the “clinical trials” section of the National Institutes of Medicine, which registers all proposed and ongoing trials. It also adds the interesting tidbit that Lakkireddy’s prayers will involve those of five different denominations. Is Lakireddy testing which religion is “right”, i.e., prayers to its god are the only ones that work?

I can find no information about funding on the site.

This is a multicenter; double blind randomized controlled study investigating the role of remote intercessory multi-denominational prayer on clinical outcomes in COVID-19 + patients in the intensive care unit. All patients enrolled will be randomized to use of prayer vs. no prayer in a 1:1 ratio. Each patient randomized to the prayer arm will receive a “universal” prayer offered by 5 religious denominations (Christianity, Hinduism, Islam, Judaism and Buddhism) in addition to standard of care. Whereas the patients randomized to the control arm will receive standard of care outlined by their medical teams. During ICU stay, patients will have serial assessment of multi-organ function and APACHE-II/SOFA scores serial evaluation performed on a daily basis until discharge. Data assessed include those listed below.

I’m torn between thinking this is a waste of time, as an overview of previous studies shows no effect of prayer—not surprising in view of the inefficacy of God in “faith based healing” as practiced by various Christian sects, of the failure of prayer to restore missing limbs and eyes, and of no evidence for the presence of any God)—and, on the other hand, wanting it to proceed because, if the study is done properly and with sufficient rigor, it’s not going to support evidence for a prayer-answering God. (I do think that, as a true believer, Lakkireddy should let others run the study and analyze its results).

In Faith Versus Fact I detail what kind of results would make me (tentatively) accept a deity. Consistent effects of one kind of prayer (or all kinds of prayers) on healing would make me sit up and take notice, that’s for sure. But we haven’t had that.

Two more points. First, if the study shows no effect of prayer, I expect NPR to do a followup reporting that result. (They surely would if they find a positive effect!). And I will badger them about this after the study ends in August.

Finally, the mere existence of this study gives the lie to religionists’ claim that “Science cannot study the supernatural, for that realm is off limits to naturalistic analysis.” But, as even Lakkireddy admits, this is a case in which science can indeed study supernatural claims! But we shall see if they’re supported. These studies usually have a one-way effect: if they show an effect, the faithful trumpet it to the skies. But if they show no effect, the faithful quietly shelve the results and speak no more of them.