I have to say that Quillette‘s articles are getting distressingly predictable. Although many of them I find ideologically compatible and useful, as they call out the woke and the excesses of the Left, all too often I can tell what’s going to be in a piece simply by looking at its title. I don’t like 100% predictability, and although nearly all websites have their biases, writers like Christopher Hitchens used to surprise us with his takes. You could never quite figure out where he was going to go in a piece, and that was a nice surprise—and made you think. I don’t find that unpredictability in Quillette.

That said, I still think it’s a site sui generis, and much needed. The article below, which complains about the ideological way books are now judged and rated, is a mix: I agree with a lot of it but disagree with some of the predictable parts.

Click on the screenshot below to read it. The author, Elena Shalneva, is identified as “a London-based journalist, writing about books, film, and culture. Her work has appeared in Standpoint and City AM. She has published several short stories, and is currently completing her first collection. She is also guest lecturer at King’s College London.” 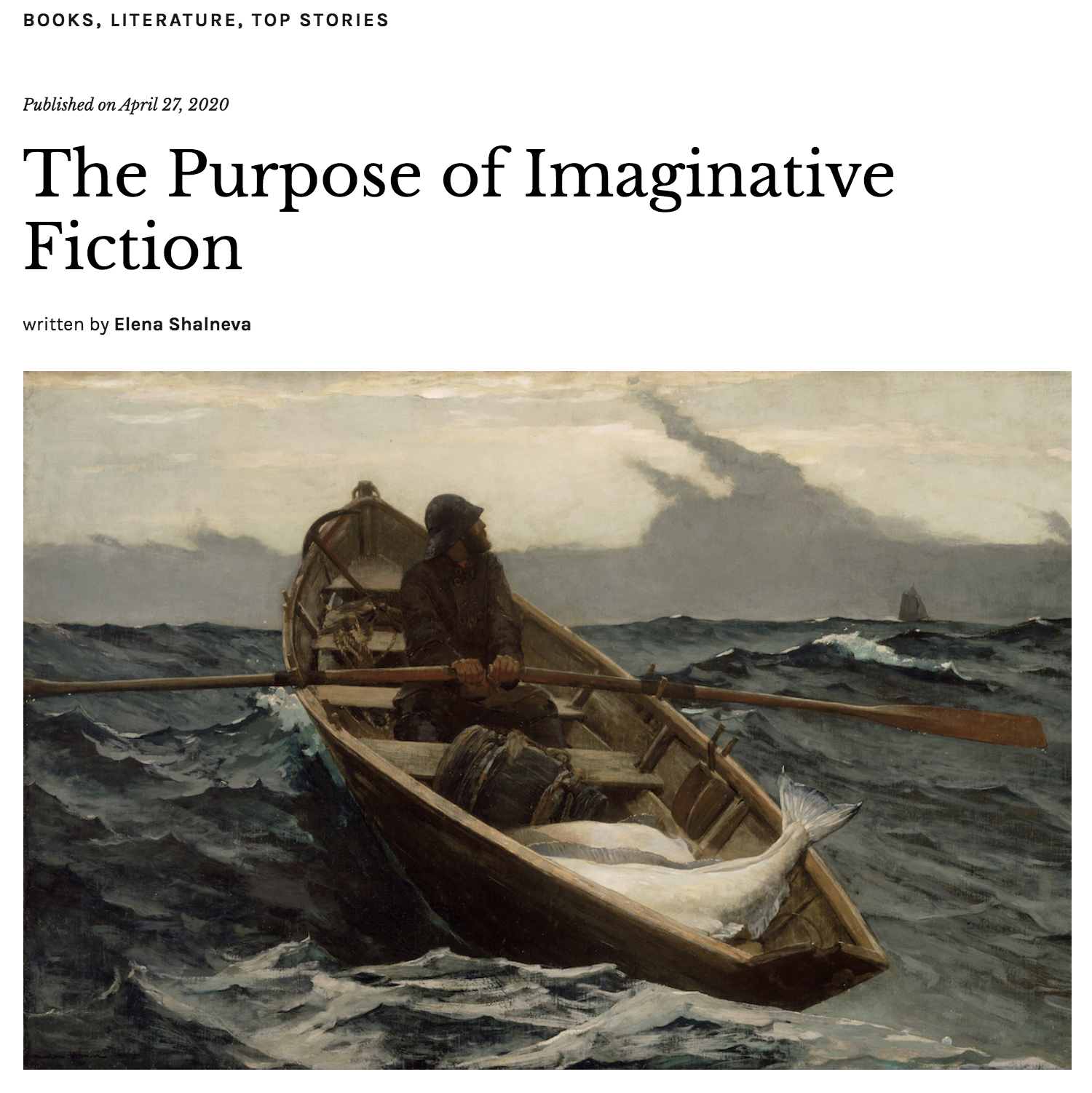 Shalneva has some valid complaints. One is that, increasingly, books seem to be judged and given prizes not on their literary merit, but on the ethnicity of their authors (minorities and women good, white bad) or on their subject matter (woke or Left-wing subjects good, other subjects bad). I think she has a point here, and one example is the awarding of the 2017 Royal Society Investment Insight Book Prize (a prestigious award for general science writing) to Cordelia Fine’s Testosterone Rex, a book I found tendentious, flawed, and inferior to some of its competitors. But it had the advantage, as did the 2019 book winner, of aiming to be a corrective of sexism and misogyny in science. Ed Yong’s fine book, I Contain Multitudes: The Microbes Within Us and a Grander View of Life, didn’t stand a chance against Fine’s book, for sexism trumps microbes.

I note that the 2019 winner is among these lines as well: Caroline Criado Perez’s Invisible Women: Exposing Data Bias in a World Designed for Men (I haven’t read this one, and it did get good reviews). One could make the case that the prize has become ideologically slanted, with “woke” books having a greater chance of winning.  At least that’s what Shalneva says about one of the world’s most prestigious awards for fiction—the Man Booker Prize:

When I learned that the 2020 International Booker Prize was going ahead in spite of London’s lockdown, I rejoiced at the organisers’ resourcefulness and resilience. But then I began reading the posts about this year’s prize on the Booker website and my enthusiasm dwindled. Surveying press responses to publication of the shortlist, the organisers spotlighted the Guardian‘s observation that nominee Marieke Lucas Rijneveld is only 28 years old, “identifies as male and uses the pronouns they/them.” The New York Times, we are told, had noted that four of the six shortlisted nominees are women, and the Sydney Morning Herald had informed its readers that one of these women is a refugee who fled to Australia from Iran. A separate post made mention of “such enormous themes as intellectual freedom, sexual identity, political unrest, and loss.” I find it unfortunate that the literary industry, eager to advertise its diversity credentials, panders to the media’s obsession with secondary considerations such as choice of subject matter and author identity, rather than focusing on essential considerations such as talent and literary merit.

Yes, she does have a point here.

Shalneva goes on to argue that while one’s life experience can inform a work of fiction (viz., Moby Dick, Youth), a book doesn’t achieve greatness by conveying the author’s experience alone. Nor is an author required to have “lived experience” related to a work of fiction (viz. anything by Cormac McCarthy, Pat Barker’s The Regeneration Trilogy, and so on—all these examples are mine). Her implicit message is that ethnicity or “lived experience” alone does not a great novel make. The problem of “author not of the right ethnicity to write” particularly plagues adult fiction, whose publishers now employ “sensitivity readers” to vet books for RightThink and cultural appropriation.

It's a book. I rarely even know at all what the author looks like.

Shalneva also links to her own response to the Vox emission, as well as to that of advice columnist Amy Alkon:

Show me a woman or non-binary person who writes better than Coetzee, and I will spend weeks and months devouring their prose. Otherwise, it's Coetzee. P.S. And what a stupid, ignorant tweet, @voxdotcom . We choose the authors we read based on their creative talent – not identity.

There is a grain of truth in Shalneva’s reactions, but it sounds a bit harsh to me. For one thing, you could make a good case that Virginia Woolf, Mary Ann Evans (“George Eliot”), or Katherine Mansfield were better writers than Coetzee.  You don’t have to read just one writer to the exclusion of others.

As for reading more books by people of color, I’ve done just that, and precisely because I wanted to learn more about the black experience. I just finished Richard Wright’s Native Son, a work of fiction, but also his autobiography Black Boy, and it’s clear how much Wright’s own experience fed into that great novel. I don’t think any white writer could have written Native Son—or, for that matter, Ellison’s Invisible Man. Now those books aren’t great simply because their authors were black, but their author’s ethnicity was a prerequisite for their greatness. I believe there are some experiences that only a member of a certain group can have, and that, combined with the writer’s talent, produces a synergy that can yield great literature.

I’m sure you can think of others. Shalnevo argues that Oliver Twist doesn’t rest on “lived experience” because it “was not written by a Victorian orphan”, but is she aware that while Dickens’s father was in debtor’s prison, Dickens worked in a “blacking factory” ten hours a day, pasting labels on bottles of shoe polish? Nobody has doubted that some of the themes of his work, and his sympathy for the downtrodden and abandoned child, came from this experience.  And during that period, Dickens was in fact an orphan. As the World History Project notes—correctly, I think:

For more than a half century, students of Dickens have emphasized the crucial importance of the traumatic period in his life when his parents suddenly removed him from school and their middle-class, more-or-less genteel environment, made him live apart from the family, and forced him to work at Warren’s Shoeblacking factory and warehouse. As Walter Allen points out, this experience had crucial influence on (1) the writer’s emphasis upon orphans and abandoned children, (2) the self-pity that permeates many of his works, and (3) their fairy-tale plots:

The blacking factory episode does not account for Dickens’s genius, but it does, I believe, explain some of the forms his genius took, and it throws light on much that is otherwise baffling both in his art and his life.

Again, you needn’t have worked as a child laborer to have written a book about it, but the greatest book about it just happens to have rested on such experience. That’s not a coincidence.

This is why I think that it’s the combination of artistic talent and “lived experience” that had made for some of the world’s greatest fiction. But although the former is required, the latter isn’t. But it helps! That’s why many writers do extensive research for their novels. In this light, I think Shalneva’s tweet about Coetzee appears mean-spirited and, implicitly, wrong. I chose to read Ellison and Wright because of the combination of their talent and their identity. I wanted to find out what it was like to be an African-American in the Chicago of the 1920s.

And surely there are many great works of literature about which we don’t know because they haven’t been translated into English. How many of those works will thrill us and change us because they acquaint us with what it’s like to be in someone else’s shoes?

Finally, Shalneva suggests a fix for the tendency to rate books by the ethnicity or gender of their authors or by the ideological compatibility of their subject matter:

A writer capable of prose with this kind of elemental force should be rewarded and rewarded generously. A writer who isn’t, should not. Artistic vocation is a privilege, not a right, and handing prestigious awards to mediocre fiction is of benefit to no-one, irrespective of the author’s identity or the social importance of the themes they write about. It is therefore my firm belief that the Booker Prize (and all other major literary prizes) should be judged blindly. I am aware that this will create practical problems (and that it will ruffle some feathers). But overcoming such problems is surely within the capabilities of the clever people responsible for judging the Booker Prize. Admittedly, this won’t prevent authors being nominated for tackling fashionable subject matter. But if the panels wish to avoid accusations of bias, it would at least help to re-establish literary merit as the pre-eminent criterion of worth rather than privileging authors for their sex or race. And assessing merit is the reason such awards panels exist, after all. Isn’t it?

Well, in principle this is a good idea, but in practice how can already-published works be judged blind? (Perhaps editors for publishing houses can vet them blind.)

Yes, I agree that assessing merit is the reason awards panels exist, and they shouldn’t bias their awards by the genes of the author or the subject of their work. But in practice some works of great merit result from a stupendous talent transforming their own experience, and presenting it to us as another way of looking at the world. After all, isn’t one of the principle boons of literature that it helps us see the world from another person’s point of view?

39 thoughts on “Should we judge literature by its ideology and its author’s ethnicity?”