You can argue about which pandemic precautions taken by national governments are superfluous or overreactions, but this one definitely falls into the last class. The BBC reports (click on screenshot): 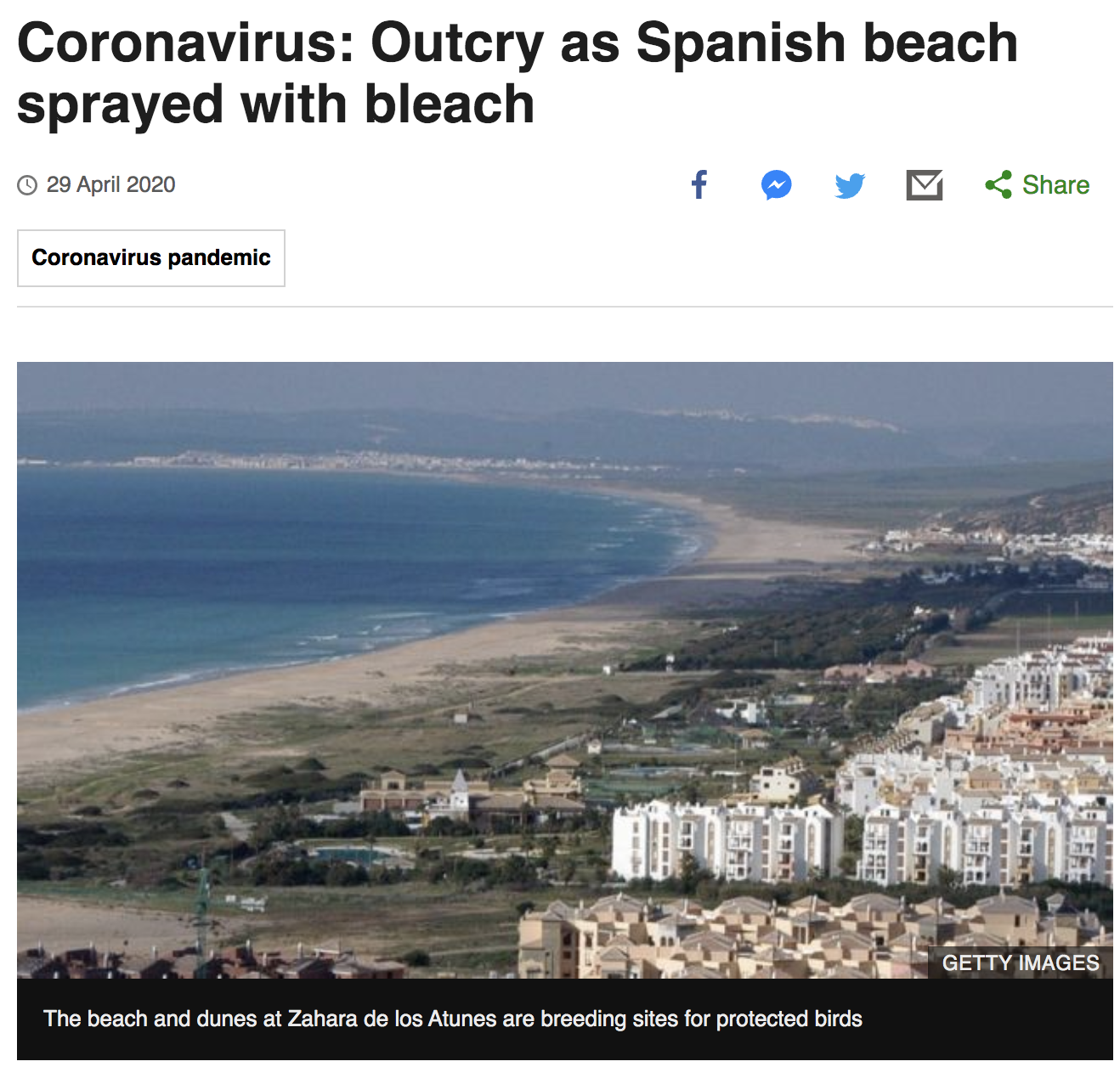 This is a really boneheaded move, especially in light of the site’s ecological importance (see Adam Rutherford’s remarks below). The BBC says this:

Zahara de los Atunes, near Cadiz, used tractors to spray more than 2km (1.2 miles) of beach with a bleach solution a day before Spain allowed children out of lockdown for the first time.

Spain has been badly affected by the coronavirus, with 23,800 deaths.

It recently announced a four-phase plan to lift its stringent lockdown measures and return to a “new normality” by the end of June.

María Dolores Iglesias, who heads an environmental volunteer group in the Cadiz region, said she had visited the beach at Zahara de los Atunes and seen the damage for herself.

She said the bleach “killed everything on the ground, nothing is seen, not even insects”.

The beach and its dunes are protected breeding and nesting places for migratory birds and Ms Iglesias said she had seen at least one nest with eggs destroyed by the tractors.

. . .Local official Agustín Conejo admitted it was “a wrong move”.

“I admit that it was a mistake, it was done with the best intention,” he said.

Mr Conejo said they had wanted to protect children who were coming to see the sea after six weeks in confinement.

Had they asked the government, or any scientist or rational physician, they would have been told that there is no danger in people contracting coronavirus from a beach itself, particularly one that has been closed down for several months. Yes, you can get it from other people on the beach, but bleaching a beach is not going to help that.

Think of all the animals killed by this ridiculous move.  Biologist, geneticist and writer Adam Rutherford, who spent some of his formative time as a biologist on that beach, and reported this article to me, gave me permission to quote his email, which he signed “In despair”:

Jerry, here’s a thing that might grind your gears. Steve Jones has been running a field trip to a little village on the very southern coast of Spain for second-year undergraduates for decades now, called Zahara de los Atunes. You can see Africa on a clear day. It’s a place where they have fished tuna for centuries as they migrate in and out of the Med using this brutal but effective technique called Almadraba.

I went in ’95; it is the highlight of the evolution undergraduate experience at University College London: field work on Aquarius, mark-recaptures on beetles, various snails, and our first taste of our own research projects – mine was a rather naive observation of how manipulating floral symmetry affected pollinator visits (and I continued on symmetry in stalkies for the next couple of years). More important, as I’ve said dozens of times, learning statistics on the roof of a hotel on the beach with a beer, is by far the best way to make it stick. I’ve been back twice now when travelling round Andalusia.

Steve will fill you in on the details. Anyway, the Spanish authorities bleached 1.2 km of the beach to combat coronavirus. Absolute batshit insane lunacy.

I knew of that course well. It was originally co-taught with Nick Barton before he moved to Edinburgh; and the course had a terrific reputation. Steve Jones, emeritus professor at UCL, snail researcher, author, and one of my collaborators on fly work, added his own comment about the bleaching of the place where he taught:

It strikes me as a potty idea. They probably killed a few hundred thousand snails, and perhaps ten times as many beetles (we used to do mark-recapture experiments to count the numbers, which were always huge, with most of the animals below the surface). I can’t imagine that the spray did much good to the lilies, cistus and other flowers we did experiments on, but this is the Mediterranean/Atlantic spring, and I think that the plants will bounce back pretty quick. Most of it seems to have gone onto the dunes, with lots of migratory and nesting birds at this time of year (it’s a major fly-way across from Africa). One thing it will not damage will be the coronavirus for that has its reservoir in people and not on sand.

35 thoughts on “In a ludicrous attempt to combat the coronavirus, Spain bleaches an ecologically important beach”