Here’s Audubon’s print of mallards (Anas platyrhynchos). The beaks are too long relative to the head size. 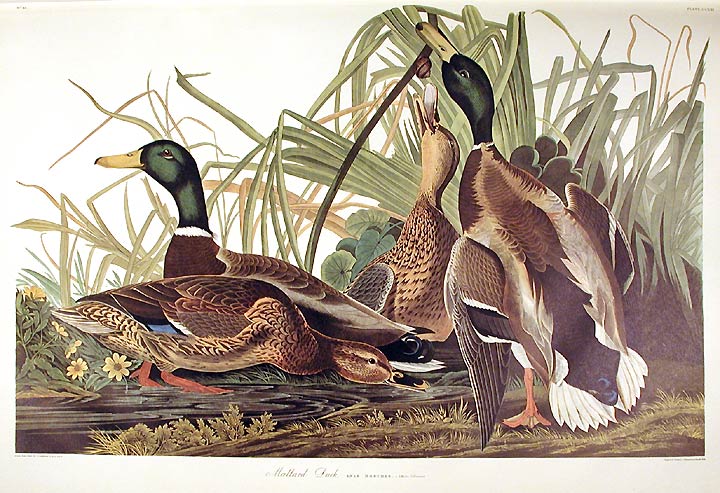 News of the Day: Still bad. Officially reported coronavirus deaths in the U.S are now 54,161; those throughout the world are roughly 203,000.

Many lockdown orders expire this week. The New York Times has an interactive map (click on screenshot) in which you can see how each state’s regulations are changing. Three states (in light green) have partly reopened, those in light tan will partly reopen April 30, and the rest (dark orange-yellow) remain locked down). Note that it’s mostly the South and the West (save the sensible states on the Left Coat) that are reopening. Go to the map and click on each state to see what’s happening: 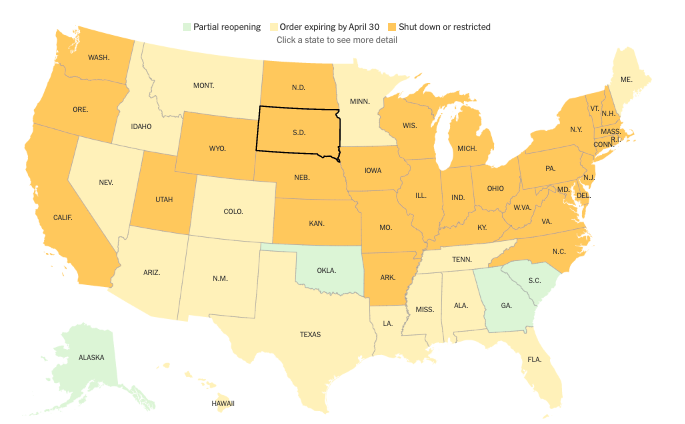 Frank Bruni, noting correctly that Trump is self-destructing in public view, muses that his loss in November is entirely possible. I hope he’s right (and I win $50 if he’s dumped).

Stuff that happened on April 26 includes:

Here’s Booth (left), who came from a famous family of actors. To his left are his two brothers:

Here is Reactor Number 4, the one whose core blew up and caused the disaster, now entombed in a steel “confinement building”: 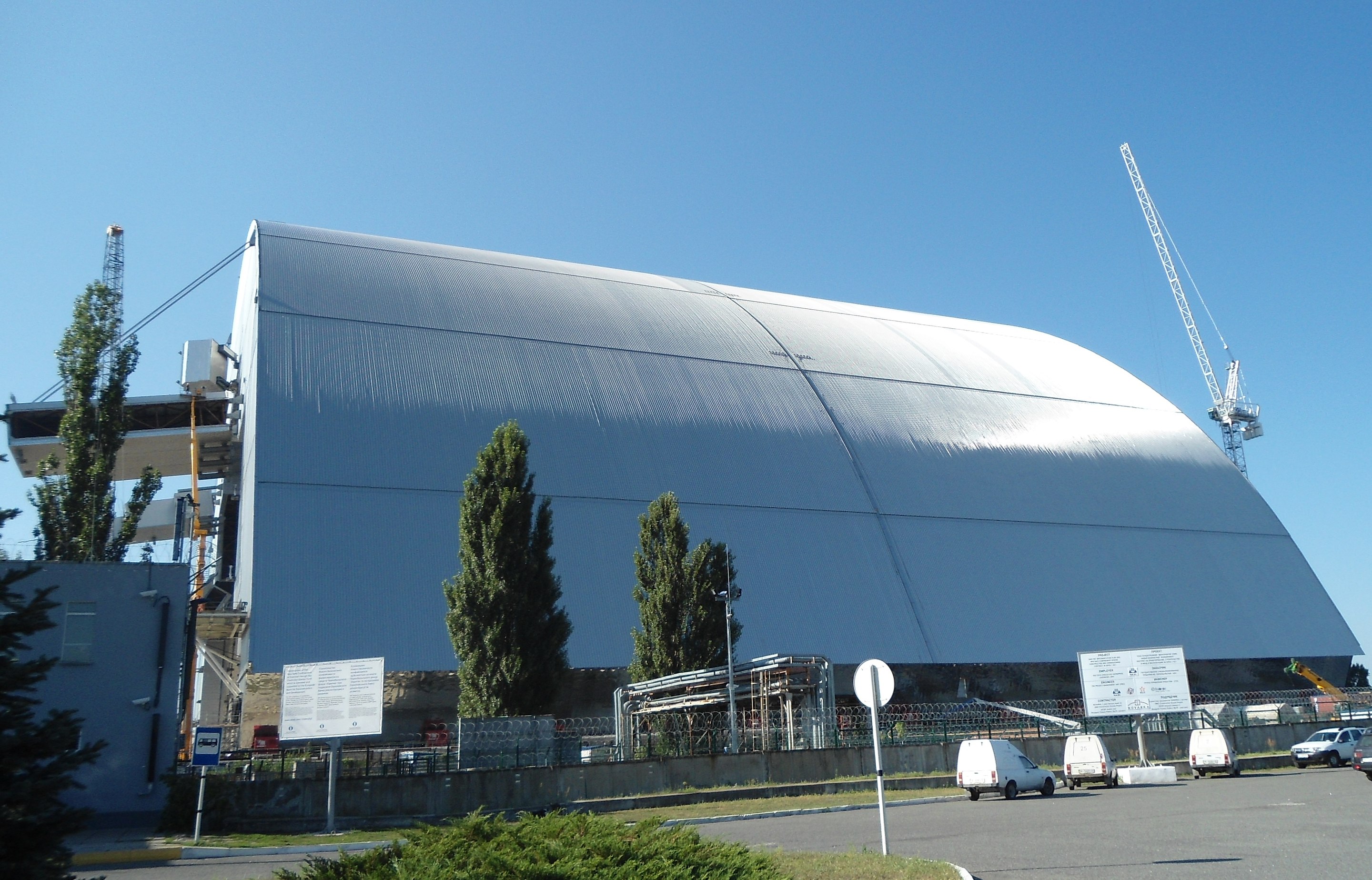 Those who drew their last breaths on April 26 include:

Here’s one of the more famous scenes from “I Love Lucy”, in which Lucy and Ethel are working in a candy factory:

Here’s George Jones singing “He Stopped Loving Her Today“: the song that, on Ken Burns’s “Country Music” series, was judged by other singers to be the most representative piece of all country music. Wikipedia notes, “It has been named in several surveys as the greatest country song of all time.” I suppose “representative” means “expressing the nature of the genre,” but I’d prefer “I’m So Lonesome I Could Cry.”

Meanwhile in Dobrzyn, Hili is being philosophical:

Hili: Life is constantly throwing up new challenges.
A: And?
Hili: And nothing, I ignore them. 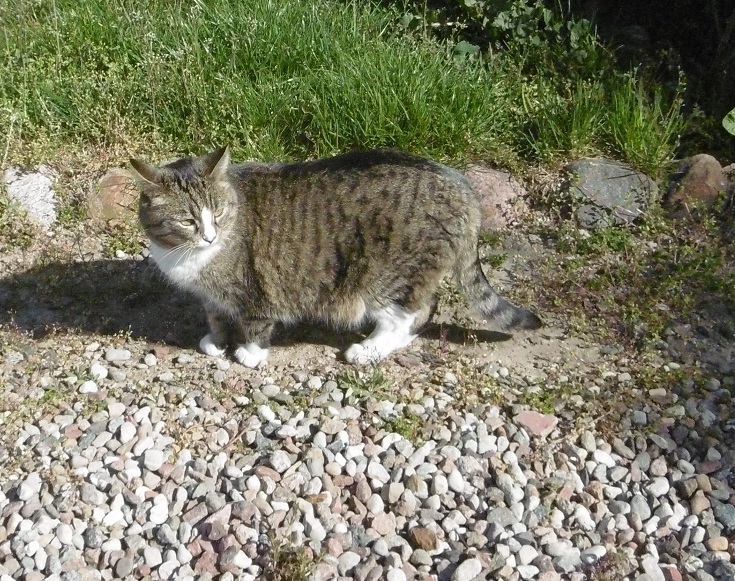 The cherry orchard is blooming in Dobrzyn, which presages many cherry pies—so long as I can get to Poland this year: 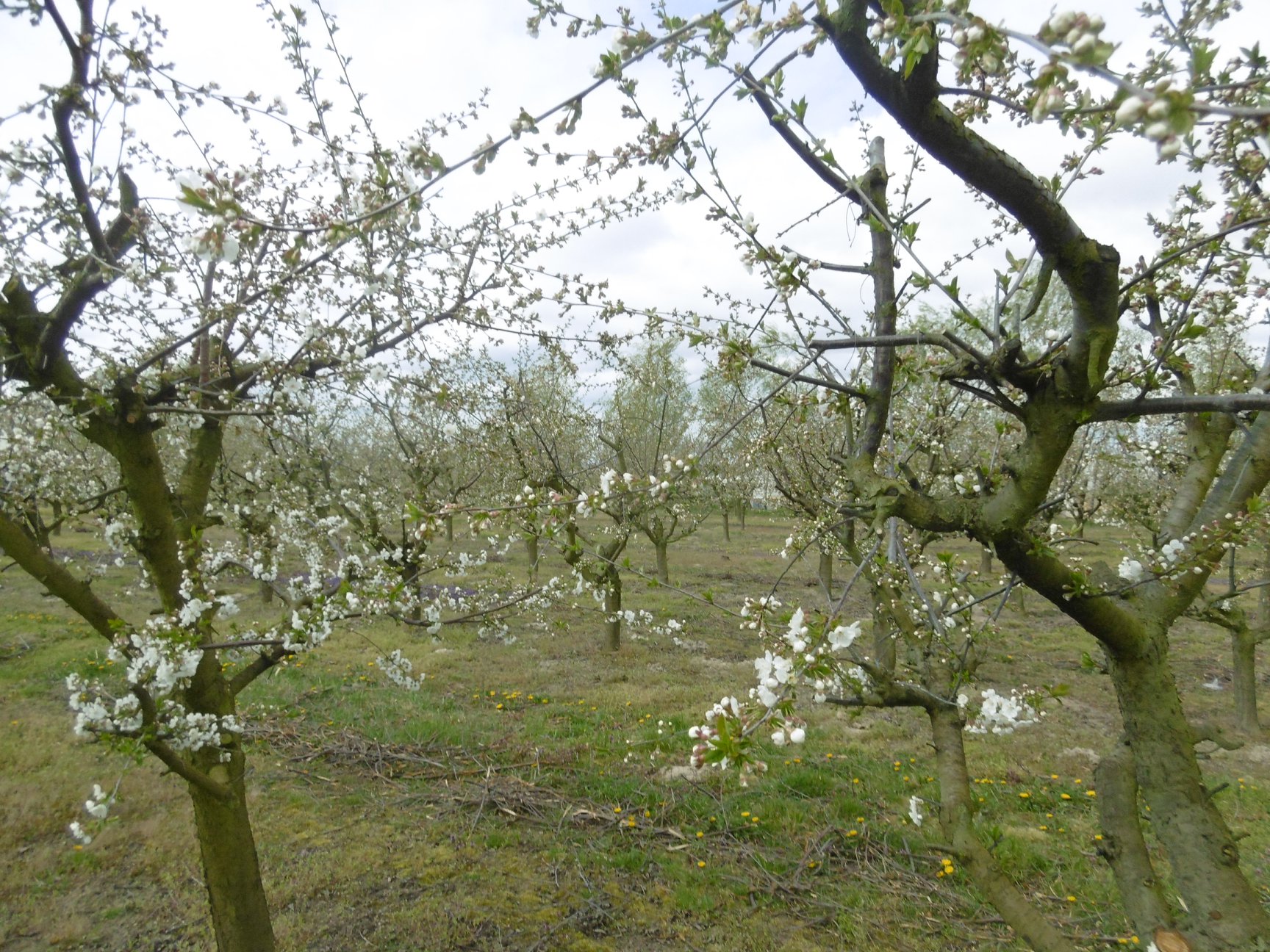 And a bonus picture of Szaron. Do you think his tail is unsightly because it’s too thin? 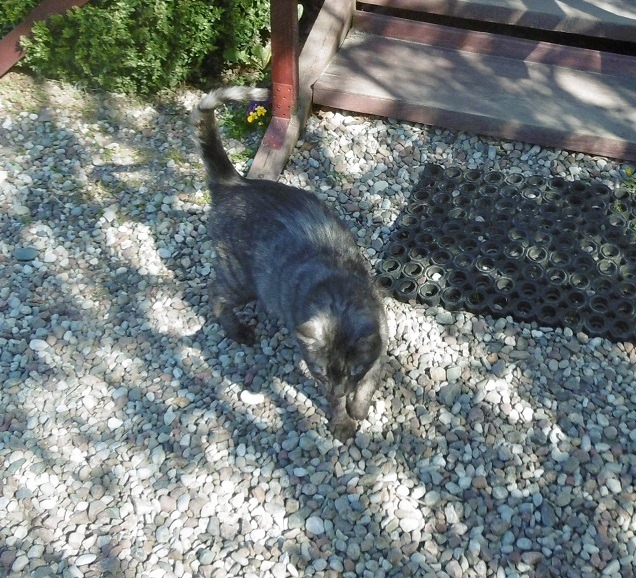 From xkcd via Bob, a funny take on the virus genome:

A fake but funny paper from Merilee: 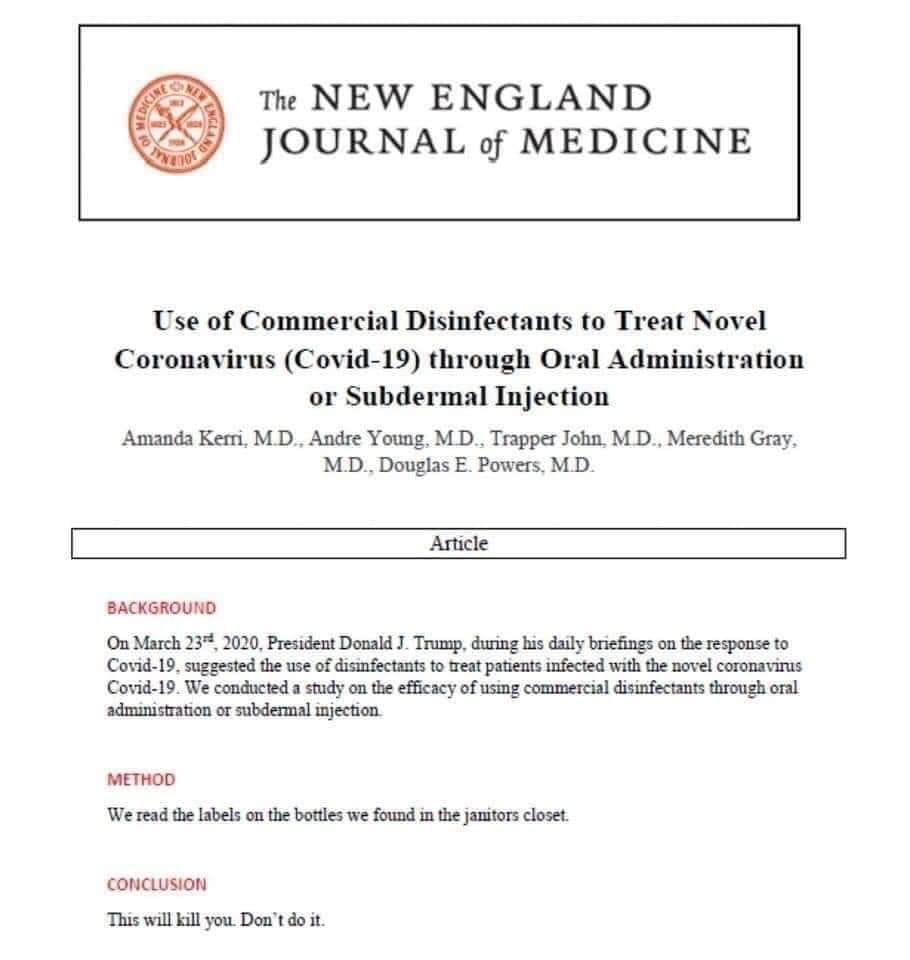 From Bruce: I think that if this is a real sign (and I doubt it), the station isn’t in any danger of dispensing free gas: 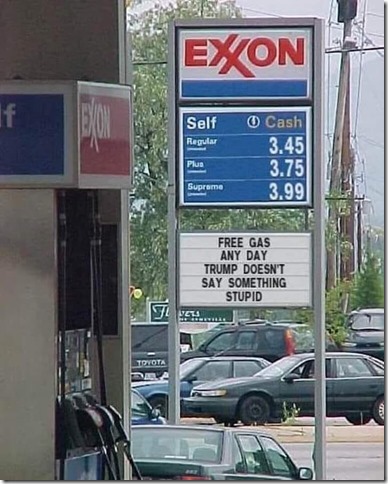 This photo was posted on FB by Seth Andrews: 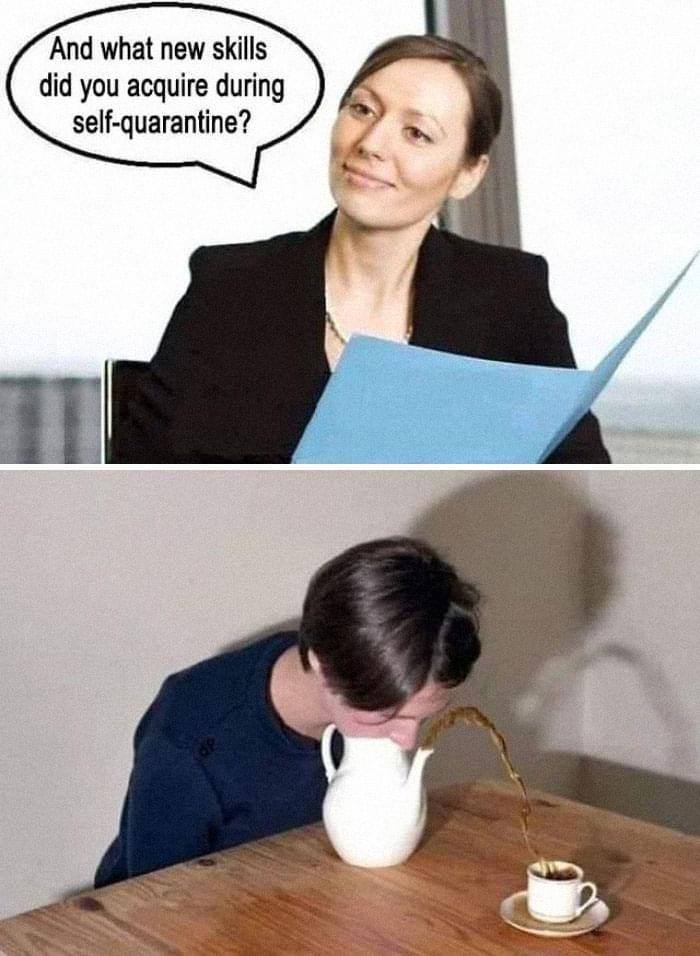 A few notables strike out at Trump’s “I was only being sarcastic” excuse:

I just want to make it clear that when I said that President Trump was mad ( in the English sense of demented, unbalanced, delusional and completely crackers ) I was of course being sarcastic

I'm sorry if I failed to make this clear

From a history professor at Princeton:

My favorite part of the president's sarcasm was when he asked the health professional to weigh in on his idea, took her response at face value, and then insisted that "medical doctors" were going to look into his idea in detail, as one does when they're just being sarcastic. https://t.co/9miGjXxW6T

And from a California congressman:

I want this to be clear. When I said @realDonaldTrump is the worst possible president we could have in a pandemic, I was NOT being sarcastic. https://t.co/0SHTRc1CjL

A tweet from Simon; it looks as if this is what I’ll be reduced to:

When you really miss traveling… pic.twitter.com/FvGE6DTcIS

John Cleese again on stupidity, this time from Heather Hastie:

Sadly, those of you who need to hear this the most are too stupid to realize I'm talking directly to you. #johncleese #stupid #people pic.twitter.com/TdpO6nBvgc

Heather also found this one on earthquakes:

Amazing #DataViz showing every recorded #earthquake in sequence as they occurred from 1901 to 2000 by @NOAA_SOS #Science #Education #AI #geology #ThrowbackThursday #BigData @FrRonconi pic.twitter.com/eUtNNPzRyj

Two tweets from Matthew. He doesn’t think this is a real class, even a real virtual class, but it’s still good:

Gotta love these high-school students messing with their teacher in cyberspace.

“Hey Max, can I borrow a pencil?” pic.twitter.com/yMzKMBlSOd

A commercial pasta machine. I had no idea, but then again I never thought about how they’d make all those shapes. Look how they make the shells!