This story was published in Nature some years ago and called to my attention by reader David. The author is the well known science fiction writer Ted Chiang, and though the story is 15 years old, it’s not only still relevant but, like the best sci-fi, makes you think hard. The story was published two years after Libet’s experiments showing that one could, using brain scans, predict with some accuracy when a subject was going to press a button before the subject became conscious of having made that decision. Since then, a host of other studies have shown that you can predict things that don’t involve physical actions, like deciding whether to add or subtract two numbers, up to ten seconds before the subject records having made a decision.

All the experiments show that brain scans can predict—not perfectly, mind you—what a subject will do before she has become conscious of that decision. And they cast severe doubt on the notion of libertarian free will: that at a given moment we could have decided to take any number of alternative decisions. People hate these results, and try to impugn them, for they don’t like the idea that decisions are determined by the brain before we think we’ve made them. People like Dan Dennett argue that if we fully grasp determinism, society will fall apart because we’ll become apathetic and refuse to get out of bed. This, of course, is not true. I got out of bed this morning and am busy writing this.

But to someone who’s science minded, determinism is the only game in town. Setting aside pure indeterminism—which would obtain if quantum processes affected our decisions—our choices and behaviors are the results of the laws of physics, and at any one time (leaving aside quantum factors) we could have made only one decision. If you doubt that, then you’ve bought into either the numinous, the supernatural, and mind/body dualism. Religious people, of course, are the most ardent believers in libertarian free will, because, at least in the Abrahamic faiths, you have a free choice about embracing God, Jesus, or Allah, and if you don’t you’re doomed.

I’ve harped about the hegemony of naturalism and determinism before, and emphasized its importance in structuring society and the judicial system. I won’t do it again; you can read what I’ve written by entering “free will” in the site’s search box.

I’ve also dismissed compatibilism as a semantic game constructed to ensure that people don’t become nihilisitic or depressed if they realize that they don’t have free will in the classical you-could-have-done-otherwise sense. The story below incorporates both determinism, a device based on the Libet experiment, and the supposed consequences of realizing that your behaviors are in fact determined. It’s a really nice and very short (1.5 page) science “fiction” story. Click on the screenshot. 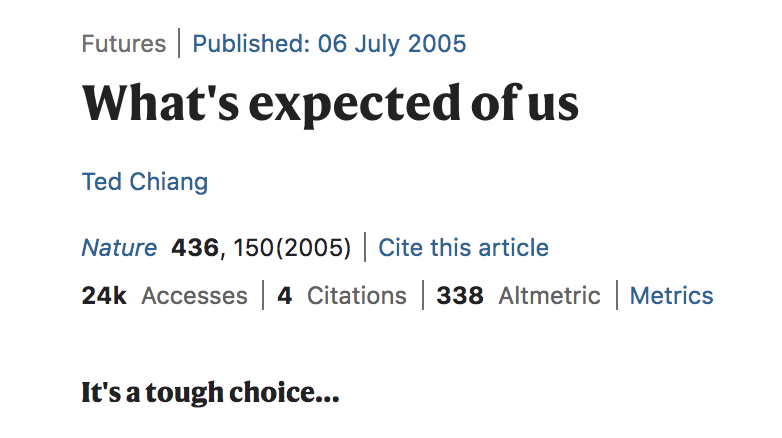 The premise: people are given a Libet-ian device that predicts with a red light when they’re going to press a button on the device. They can’t outwit it because it’s apparently been programmed with every bit of information in the Universe. The consequences: many people go nuts.

Some excerpts (but just read the story):

Most people say that when they first try it, it feels like they’re playing a strange game, one where the goal is to press the button after seeing the flash, and it’s easy to play. But when you try to break the rules, you find that you can’t. If you try to press the button without having seen a flash, the flash immediately appears, and no matter how fast you move, you never push the button until a second has elapsed. If you wait for the flash, intending to keep from pressing the button afterwards, the flash never appears. No matter what you do, the light always precedes the button press. There’s no way to fool a Predictor.

The heart of each Predictor is a circuit with a negative time delay — it sends a signal back in time. The full implications of the technology will become apparent later, when negative delays of greater than a second are achieved, but that’s not what this warning is about. The immediate problem is that Predictors demonstrate that there’s no such thing as free will.

There have always been arguments showing that free will is an illusion, some based on hard physics, others based on pure logic. Most people agree these arguments are irrefutable, but no one ever really accepts the conclusion. The experience of having free will is too powerful for an argument to overrule. What it takes is a demonstration, and that’s what a Predictor provides.

Typically, a person plays with a Predictor compulsively for several days, showing it to friends, trying various schemes to outwit the device. The person may appear to lose interest in it, but no one can forget what it means — over the following weeks, the implications of an immutable future sink in. Some people, realizing that their choices don’t matter, refuse to make any choices at all. Like a legion of Bartleby the Scriveners, they no longer engage in spontaneous action. Eventually, a third of those who play with a Predictor must be hospitalized because they won’t feed themselves. The end state is akinetic mutism, a kind of waking coma. They’ll track motion with their eyes, and change position occasionally, but nothing more. The ability to move remains, but the motivation is gone.

The reason that people go nuts in this scenario, which doesn’t occur with determinists like me, is apparently that they get a repeated, irrefutable, and tangible demonsration that they can’t choose otherwise. I guess this demonstration hits closer to home than simply the mental realization that our choices are determined before we’re conscious of having made them. But why would people buy such a device if the chances are high it would drive them nuts? (They have no choice, of course!)

Setting aside the fact that it would be impossible to build a Predictor, for it has to be in possession of all the information in the Universe, including things that happened up to the last second, it would be a useful way of demonstrating determinism. There are other problems with the description as well, but I’ll let you suss them out.

The end of the story? The narrator sends a warning back to the past about the dangers of the device:

And yet I know that, because free will is an illusion, it’s all predetermined who will descend into akinetic mutism and who won’t. There’s nothing anyone can do about it — you can’t choose the effect the Predictor has on you. Some of you will succumb and some of you won’t, and my sending this warning won’t alter those proportions. So why did I do it?

Because I had no choice.