This new article by Pew Research reports a survey of American Democrats, asking them if they were bothered by the fact that the Democratic Presidential nominee (Biden of course) is “a white man in his 70s.” The results are pretty much as you expect—most people don’t care that much (especially given his opponent!), but there’s one surprising result. Click on the screenshot to read the short report: 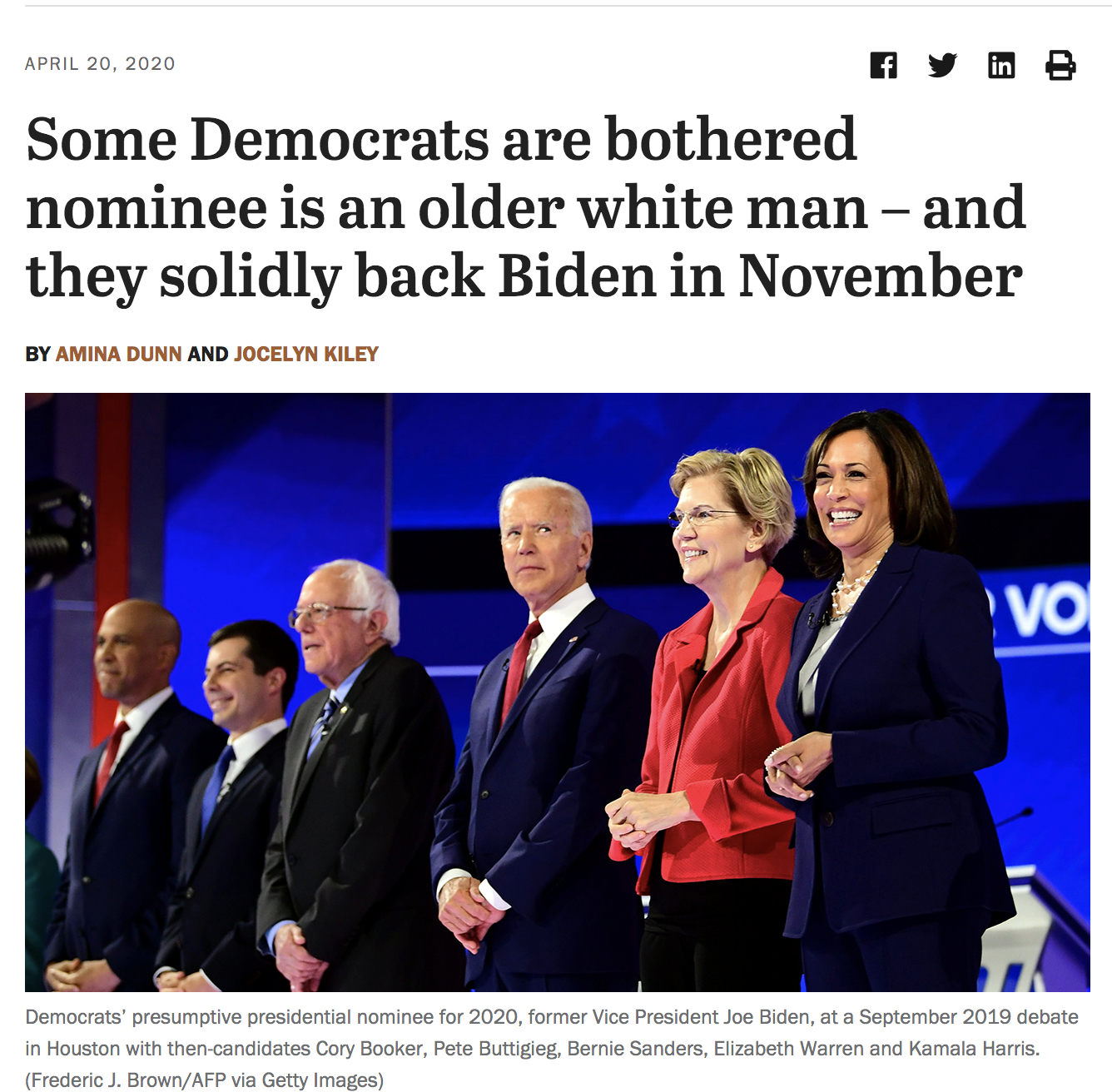 First, as the figure below shows (it also displays the question posed to people), the people least concerned with Biden being an “old white male” are, of course, those who originally supported Biden (79% aren’t bothered). But those who backed other candidates show more concern, except those who backed Sanders—the other old white male (79% not bothered). Those who originally favored either Warren (an old white woman) or Buttigieg (a young white gay male) were, as expected, more bothered  (26% and 43% not bothered, respectively.  Overall, 59% of total Dems aren’t that bothered about Biden’s age and race. 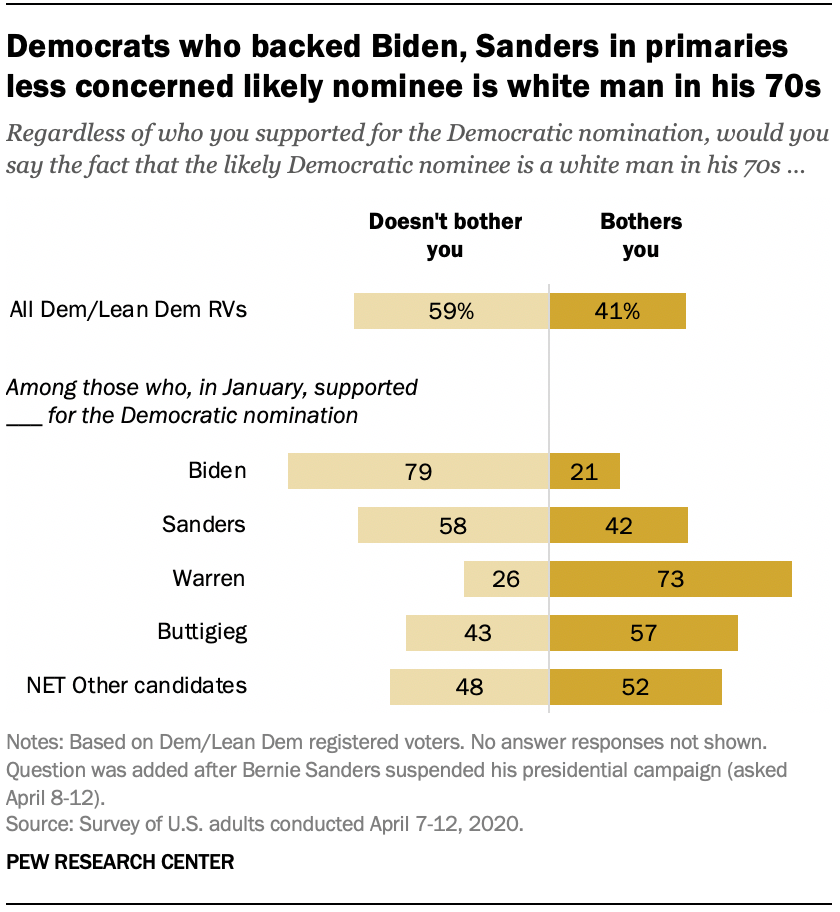 But the good news is that regardless of whether Dems are bothered by the OWM (old white male) syndrome, they are overwhelmingly in favor of Biden when he’s put up against Trump. 89% of all Dems disapprove of the way Trump is handling his job (8% approve!), with most of the disapproval being “strong”. The disapproval is a bit stronger among those who are worried about Biden being an OWM. But there’s no difference when it comes to voting: among all Dems surveyed, 85% intend to vote for Biden or lean towards him (4% are Trump/lean Trump!), with 10% being “neither or others”. When you divide up the Dems by whether they’re concerned about Biden’s being an OWM, there’s hardly any difference between the degree to which the two groups favor Biden: 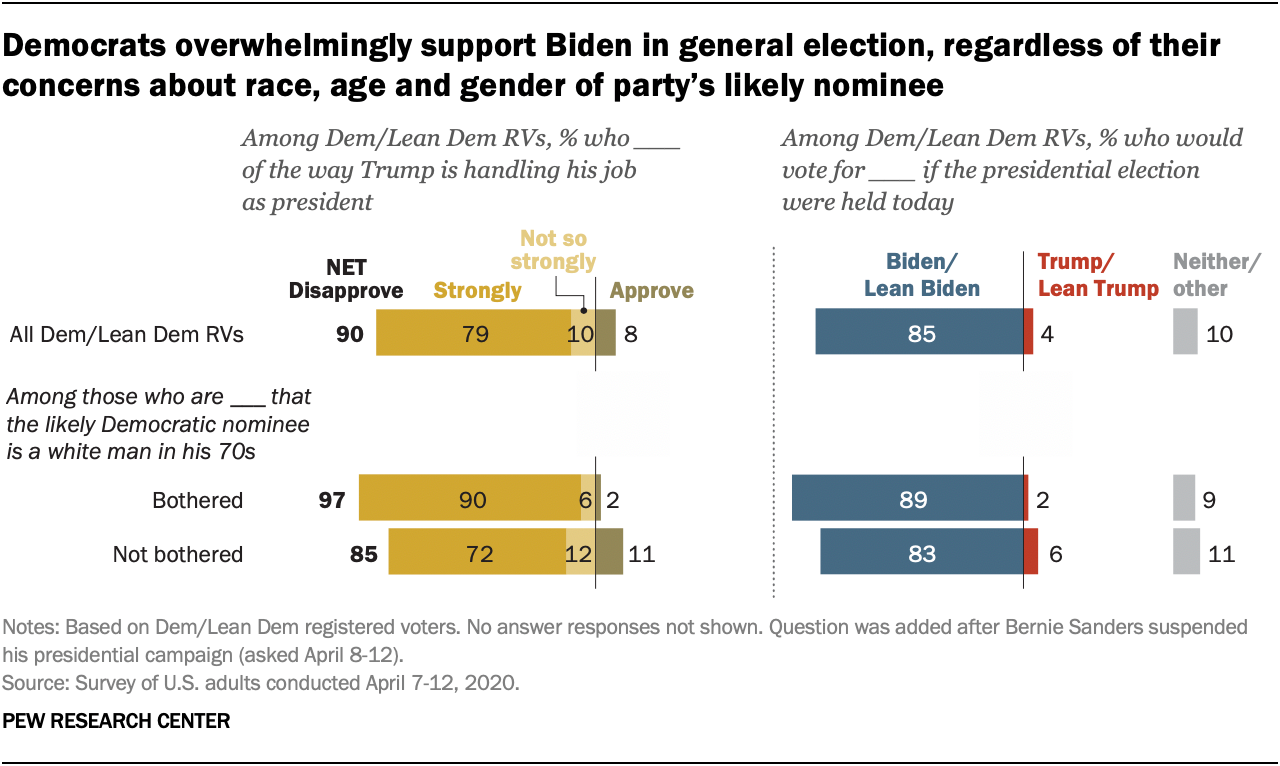 This is heartening in that it shows that Democrats have largely come together behind one candidate, even though, as I believe—many interviewees must feel the same way—that Biden is not an overwhelmingly fantastic candidate. Still, only 85% of Dems say at this point they’ll probably vote for Biden. If too many Dems stay home because they wanted Sanders or Warren to be the nominee, we’ll be screwed.

But there is one surprising result. If you break down the Democrats by race, age, gender, ideology, and education, and ask them if they’re bothered by Biden being an OWM, here’s what you get (the red box is one I’ve added): 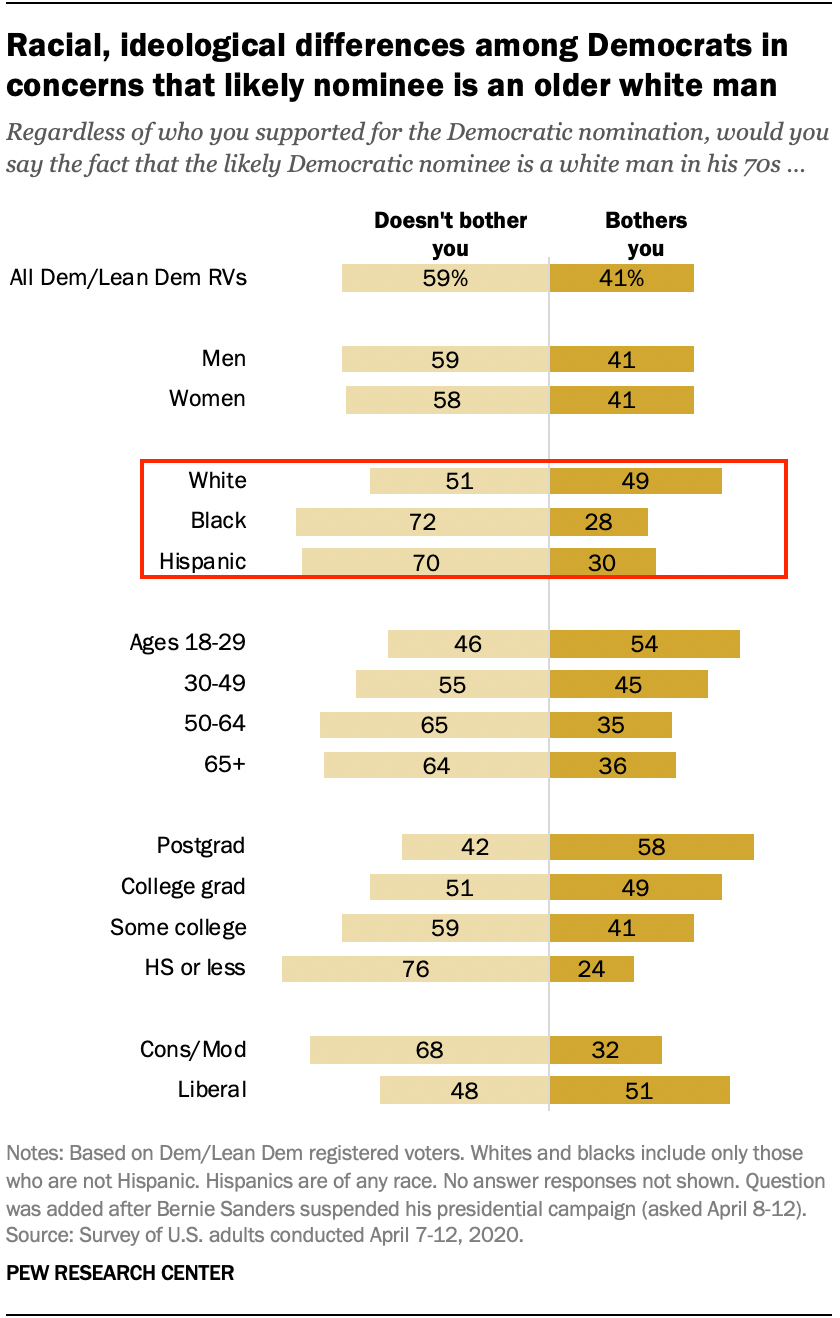 Men and women are about the same, and, as you might expect, the younger and more educated people are more bothered by the OWM syndrome (they are more likely, I think, to be more conscious of racial equity given the climate among liberals). The difference between postgraduates on one hand and those who had some high school education but no college on the other, is huge: 58% vs 24% respectively are bothered by the fact that Biden’s an OWM.

What surprised me was the division among races. I would have expected that minorities—African-Americans and Hispanics—would have been more bothered by OWM, for no candidate represents them, though the withdrawn candidates Cory Booker and Kamala Harris identify as black. But while 49% of white Democrats are bothered by Biden being an OWM, only 28% of blacks and 30% of Hispanics are.

It’s clear, then, that white Democrats are more bothered by OWM candidates than are blacks or Hispanics.  That’s not what I expected.

Now I can make up post facto theories (which are mine) about why this is so. For instance, you could say that blacks and Hispanics, who are overwhelmingly Democratic, are so relieved that Biden got the nomination—he polls more strongly in those communities than Buttigieg, Warren, or Sanders—that they don’t much care if he’s an OWM. Or one could say that this reflects white guilt. I’ve heard that the most woke antiracists are in fact white, but until now I had no data supporting that.

Or perhaps there’s another explanation. If you have a theory which is yours, put it in the comments below.

59 thoughts on “Pew survey of American Democrats and their views on Biden as an “old white male”: some good news and some puzzling news”