On March 15, I highlighted an op-ed in Nature by science writer Angela Saini, in which she discussed—if “discussed” is the proper word for such a biased and tendentious piece—University College London’s (UCL’s) recent inquiry into the eugenic practices of Francis Galton and Karl Pearson, science pioneers who were also racists, and whose name was bestowed on UCL buildings, lecture rooms, and endowments. What irked the UCL scientists who responded below to Saini’s claims—and irked me as well, since I spent considerable time at UCL—was her repeated assertion that UCL scientists had swept its racist and eugenic history under the rug, and were lacking objectivity.

Here are some of her claims (click on screenshot to read the whole sorry piece):

Two excerpts. The first is an arrant whopper (in bold):

When a survey conducted as part of the UCL inquiry asked staff and students whether “we should separate science and politics”, it found agreement among higher percentages of those in the sciences and engineering than in the social sciences and history. In my coverage of the inquiry, I’ve seen that it was not the university’s biologists, but its humanities scholars — including curator Subhadra Das and historian Joe Cain — who forced their workplace to confront a sordid history that some geneticists had been willing to overlook.

That’s simply not true, as I’ll show in later posts. UCL biologists have been lecturing on Galton’s racism and eugenics program for decades, and have written popular articles about it. On that same day, in fact, I mentioned a piece published in the British medical journal The Lancet by UCL geneticist Steve Jones, who taught genetics at UCL for decades, and estimates having exposed about 10,000 students to Galton’s racism and UCL’s connection to eugenics.  Saini’s claim in bold is simple self-congratulation by a woke osculator of humanities—a claim that ignores the fact that UCL biologists have long “confronted”—and not “overlooked”—the “sordid history.”

Also, Saini was willing to indict others for their lack of objectivity, but refused to look in the mirror. Her own work, in which she highly politicizes science, is about as tendentious as it gets. This article is merely one example of her distortion of history to support her oppression-centered ideology. Second quote:

Scientists who imagine that bias lies in others, not themselves, fail to recognize that to live in the world today is to be drip-fed assumptions and prejudices that guide our thoughts and actions. If it were any other way, the demographics of academia would be more equitable, and the current strain of genetic determinism in governments wouldn’t be possible.

. . . Scientists rarely interrogate the histories even of their own disciplines. When I studied engineering at university, I was expected to write just one essay on ethics in four years. No wonder that new technologies perpetuate racial and gender stereotypes, or that automated facial recognition struggles to identify people with darker skin.

The best research is done not when we pretend that we are perfectly objective, but when we acknowledge that we are not. The UCL inquiry report recommends that students and staff be exposed to the history of eugenics, and that students be encouraged to value the history of their own fields. I would go further. Scientists need both history and the social sciences to develop the intellectual tools to think critically about their research and about their research and how it affects society. This isn’t just helpful — it’s vital.

Is Saini, then, willing to step up and acknowledge her own lack of objectivity? I wouldn’t hold my breath.

Anyway, a group of biologists from UCL have now responded to Saini by publishing a letter in the pages of Nature. Steamed by her misrepresentation, they submitted the following letter to the journal:

The statement in the article by Angela Saini (9 March 2020)1 that it was ‘not the university’s biologists, but its humanities scholars… who forced their workplace to confront a sordid history that some geneticists had been willing to overlook‘ is false. Our department (Genetics, Evolution and Environment, University College London) has direct historical links back to the Galton Eugenics Laboratory. However, for several decades our past and present members have engaged critically with this history, and the lessons learnt have formed important components of ethical debates relevant to our research, the development of genetic counselling protocols, and the debunking of the foundations of eugenics, as well as the related issue of ‘race’ as a biological concept. We have taught this pernicious history to the tens of thousands of students who have passed through our various courses, and many members of our department have also written and spoken openly and critically to the media and public on the subject. The failure of the UCL Eugenics Inquiry report to acknowledge this properly is one of several reasons why the majority of the Inquiry committee refused to sign it.

The published letter is below, which is pretty close to what was submitted. Note that there are ten authors, including scientists who also did popular writing, like Steve Jones, Nick Lane, and Adam Rutherford.

One telling thing is missing from the submitted version, though. Can you spot it? 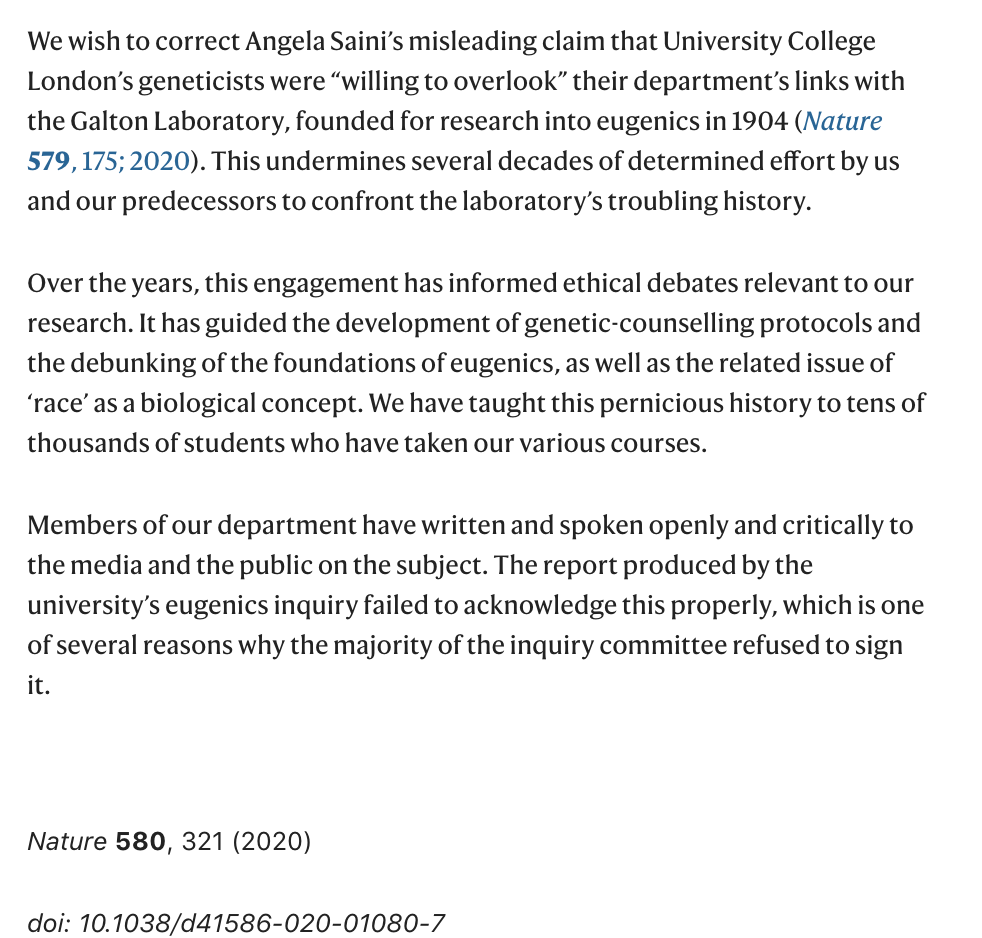 What’s missing is Saini’s crucial claim, mentioned in the submitted letter, that “it was ‘not the university’s biologists, but its humanities scholars… who forced their workplace to confront a sordid history that some geneticists had been willing to overlook‘”.  Nature has simply omitted the bit about the “humanities scholars”. I doubt this was for lack of space; I suspect they simply didn’t want to mention (and thus implicitly criticize) the “humanities scholars” who, says Saini, put things right. Well, at least Nature published the letter, though who’s going to read such a short and terse response to Saini’s gaseous article without going back to see her insupportable claims?

I’ll put up a couple posts over the next two weeks detailing the ridiculously woke “Inquiry into the History of Eugenics at UCL” report (which even demands that UCL apologize—but to whom?), a report that might well have come from the faculty and staff of The Evergreen State College—or from the editors of Pravda.