Tonight marks the 77th anniversary of a daring and unique rescue, when members of the Belgian Resistance tried to free a train full of Jews being transported to Auschwitz. Matthew wrote about it in one of his books (see below), and kindly offered to provide a piece for readers. The story is largely unknown but deserves to be remembered. Without further ado:

Bravery in the midst of horror: the attack on Convoy 20 to Auschwitz

77 years ago, on the evening of 19-20th April 1943, an audacious operation to save Jews being deported to Nazi Germany took place in Belgium. This was the only known organized attempt in the whole of Occupied Europe to stop the deportation of Jews. What follows is an extract from my book The Resistance: The French Fight Against the Nazis (2010). These passages are based on Marion Schreiber’s excellent 2000 work, translated in 2004 as The Twentieth Train: The True Story of the Ambush of the Death Train to Auschwitz.

During the Occupation, Belgian Jews were herded into a concentration camp in Mechelen near Antwerp and housed in the old Dossin barracks. 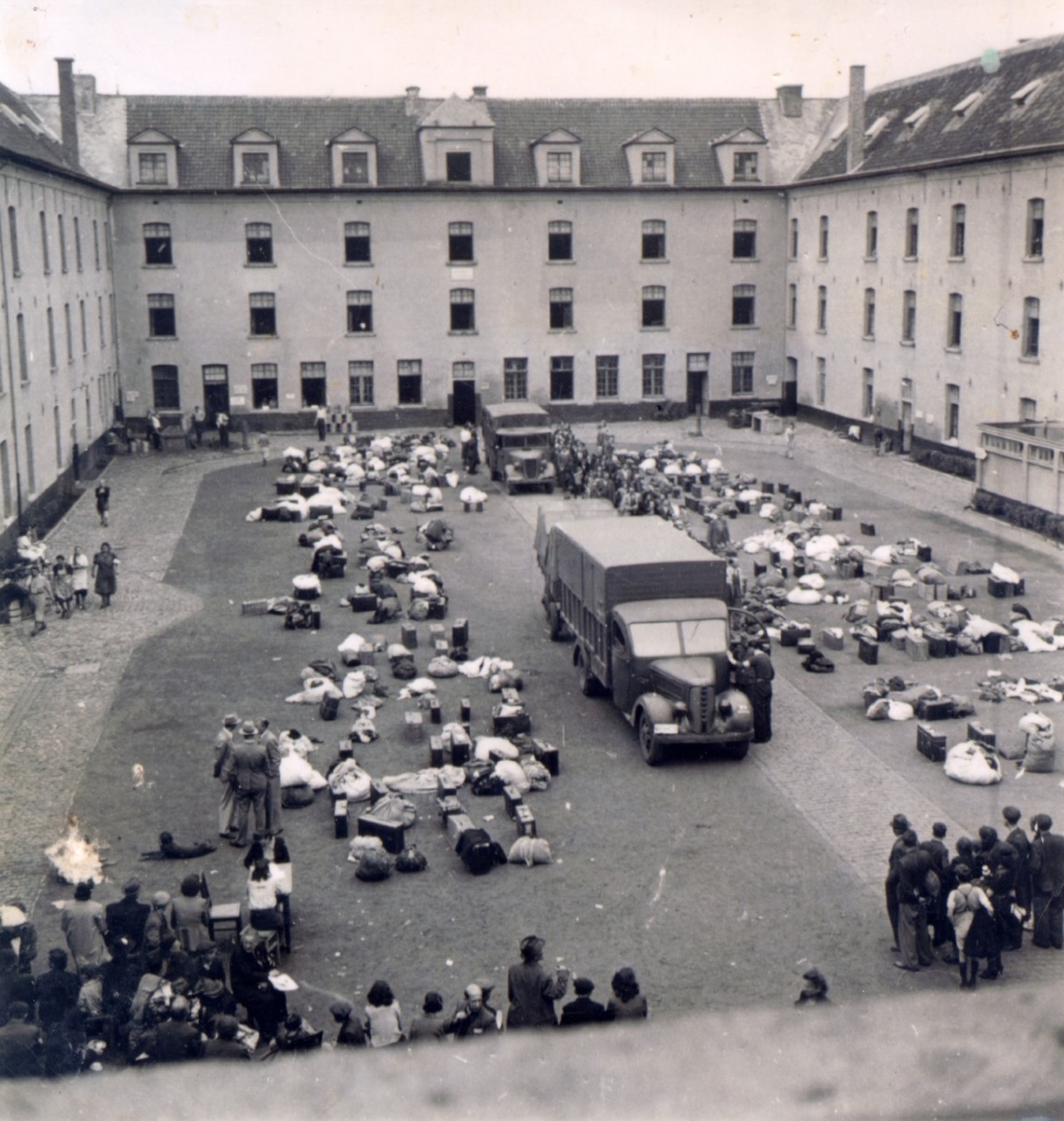 By the end of the war, over 26,000 Mechelen inmates had been deported to Auschwitz, all of them Jews, apart from 365 Gypsies. Nearly 16,000 of them, including virtually all the children, were gassed as soon as they arrived in Auschwitz. Conditions in the Mechelen camp were appalling. The Nazis subjected their prisoners to systematic humiliation and degradation, drawing swastikas on Torah scrolls and religious books, making Hasidic Jewish men cut off their distinctive hairstyles and repeatedly threatening people with dogs.

Incredible as it may seem, treatment of the Gypsies was even worse – they had no access to toilets, and were let out of their cells for one hour a day, during which they were beaten.

In early 1943 a young Jewish Communist called Hertz Jospa hatched a plan to attack one of the rail convoys and free the deportees. The Belgian Resistance felt the plan was ‘too daring and too dangerous’ – they thought such an operation would require at least twenty men armed with grenades and firearms to hold off the Nazi guards, and the Resistance would then have the responsibility of looking after hundreds of refugees. However, one of Jospa’s comrades, Youra Livchitz, a handsome young Jewish physician, was enthused by the idea, and managed to persuade some résistants to give him a revolver.

Meanwhile, Jospa began to organize support for the operation. Twenty thousand francs were collected, enough to give each freed deportee fifty francs – the price of a tram ticket. Coincidentally, Communist prisoners in the Mechelen camp were planning to escape when the next convoy left. With the help of a secretary who worked in the camp, the Communists manipulated the list of deportees so they would all be in the same wagons. When a message was smuggled into the camp, announcing that the convoy would be attacked, the prisoners gathered the saws, files and knives they had been hiding.

Then, on 16 April, the inmates were told the next convoy would be leaving three days later, on the eve of Passover. The Nazis had planned it so that over 1,600 Jews would spend one of the most important days in their religious calendar riding in cattle-wagons towards their death.

Despite having only three days’ notice of the operation, Livchitz was able to persuade two young men to join him: his childhood friend Jean Franklemon, a Communist actor and musician who had fought in Spain, and Robert Maistriau, four years younger, who had gone to the same school.

Neither had previously been involved in any action against the Occupation. Armed only with the revolver, a torch covered with red silk and some bolt-cutters, the three young men rode off on their bicycles to the place Livchitz had decided would be the site of the attack. As Maistriau later recalled: ‘We felt a mixture of adventure, a desire to help and also to cause trouble for the Germans. At that point, nothing could have stopped me. We were full of hope.’

At ten o’clock on the evening of 19 April, right on schedule, Convoy 20 pulled slowly out of the Mechelen camp on its way to Auschwitz. Thirty wagons long, hauled by a huge steam locomotive, the convoy carried 1,631 people, including 262 children, many of them travelling without their parents. The oldest person, Jacob Blom, was ninety years old; the youngest, Suzanne Kaminski, had been born in the camp less than six weeks before. Her short life would end in the Auschwitz gas chambers.

Even before the train arrived at the spot where Livchitz and his comrades were waiting, two young men and a woman had escaped, having broken through the bars of the small windows and jumped to safety. That was just the beginning.

As the train chugged around a curve, the driver saw the red warning lamp Livchitz had placed in the middle of the track. He slammed on the brakes, bringing the convoy to a halt with a terrifying mixture of screaming metal and hissing steam that paralysed Maistriau with fear. He gathered his wits and ran to the last wagon, cut open the lock, slid back the door and called on the prisoners to jump out. There was an argument, as some deportees shouted: ‘It’s forbidden: The Germans will kill us.’ Hena Waysng, a thirty-year-old woman in the wagon, remembered what happened:

All of a sudden, the train stopped. We didn’t know what was happening or where we had stopped. In the wagon, people started shouting, pushing. Then a passenger who was by the narrow window shouted: ‘Over here, over here!’ A young résistant opened the door and gave money to those who were in front and shouted: ‘Get out, get out!’ I was frightened and I didn’t dare jump. But in a flash I realized that my two sons would always be on their own if I didn’t have the courage. So I jumped.

Meanwhile, Livchitz was firing from the bushes, convincing the German guards at the front of the train that they were being attacked by a large group of partisans. Eventually, the soldiers realized that they were in no real danger and men were sent out to chase Livchitz, who very sensibly fled. Maistriau and Franklemon freed seventeen deportees, gave each of them fifty francs and showed them how to get to the nearest tram station.

Once their charges were safe, the two young men returned to where they had hidden their bicycles and rode off, exhausted. Livchitz, unable to get to his bike because of the Germans searching for him, had a two-hour walk home.

Eventually, the train steamed off, but all along the way, thanks to the work of the Communist partisans, it leaked prisoners as people escaped through doors and windows, using the equipment the partisans had smuggled on board the train. Twenty-three people were killed either when jumping or as the German guards shot at them, but in total two hundred and thirty-one more men, women and children escaped from the convoy.

Exactly as the Resistance had feared, many of the escapees had little choice but to throw themselves on to the mercy of local people. But the Belgians proved more welcoming than many expected – amazingly, not one of the deportees was denounced.

Things did not go so well for Livchitz and Franklemon, both of whom were betrayed and arrested later in the year. Livchitz was executed in 1944. Before he was finally captured, Livchitz gave another bravura display, managing to escape from Gestapo headquarters after hours of torture – he overcame his guard, put on the Nazi’s uniform and walked calmly out of the building. Maistriau survived the war, dying in 2008. Franklemon died in 1977, Jospa in 1966.

The story of Convoy 20 was unique. The combination of an attack by a handful of brave men, a well-planned escape by the deportees and amazing luck all round was never repeated. To which the question must be asked: Why not?

Here are the faces of some of those who were on the train, from an installation in Brussels (2009):

If you understand French, here is an eye-witness account from Simon Gronowski, who was a child on the train and describes what happened:

In 1993 a memorial to the attack was erected by the side of the railway tracks: 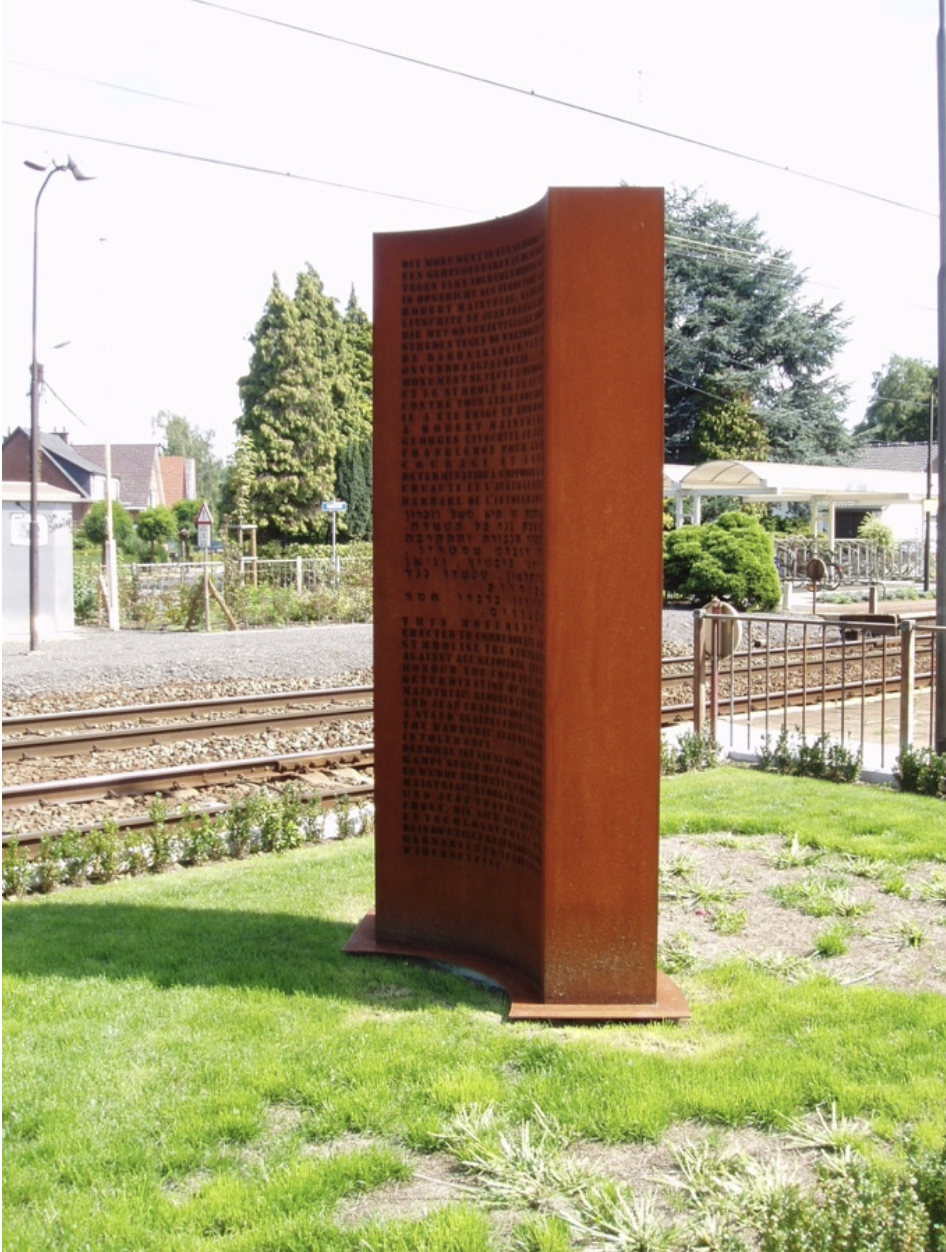 23 thoughts on “Post by Matthew Cobb: A Resistance attack on a convoy of Jews heading to Auschwitz”