Welcome to Friday, April 10, 2020; it’s National Cinnamon Roll Day, and boy, could I use one! It’s also American Society for the Prevention of Cruelty to Animals Day (it was founded on April 10, 1866), National Farm Animals Day, Global Work from Home Day (make that a month or two), Siblings Day, Golfer’s Day (who’s the one golfer being celebrated?) and, of course, Good Friday, when Jesus was supposedly crucified some time between A.D. 30 and 36.  April 10 is normally the 100th day of the year, but it’s the 101st in 2020 because it’s a leap year.

News of the Day: Do I need to say it’s still dreadful? As of this writing, the worldwide death toll from the pandemic is 96,791, and in the U.S. it’s 16,676.  Last night the news named Illinois as one of the growing pandemic “hot spots”.  The media and the Outrage Brigade continues to leverage the pandemic to bolster identity politics: every group is claiming the exacerbation or uncovering of oppression by the pandemic. See today’s New York Times for some choice examples.  (And yes, I do think Trump’s repeatedly calling coronavirus “the Chinese virus” is a deliberate example of bias and xenophobia.) But can’t people put their agenda aside just for a couple of months?

Today I will walk four miles through dicey parts of Chicago today to pick up my car at the garage (brakes got fixed), as, on medical advice, I dare not risk taking an Uber. Well, it’s exercise.

Matthew says he wrote “a cranky letter” to the Guardian; here it is. I love that old curmudgeon! 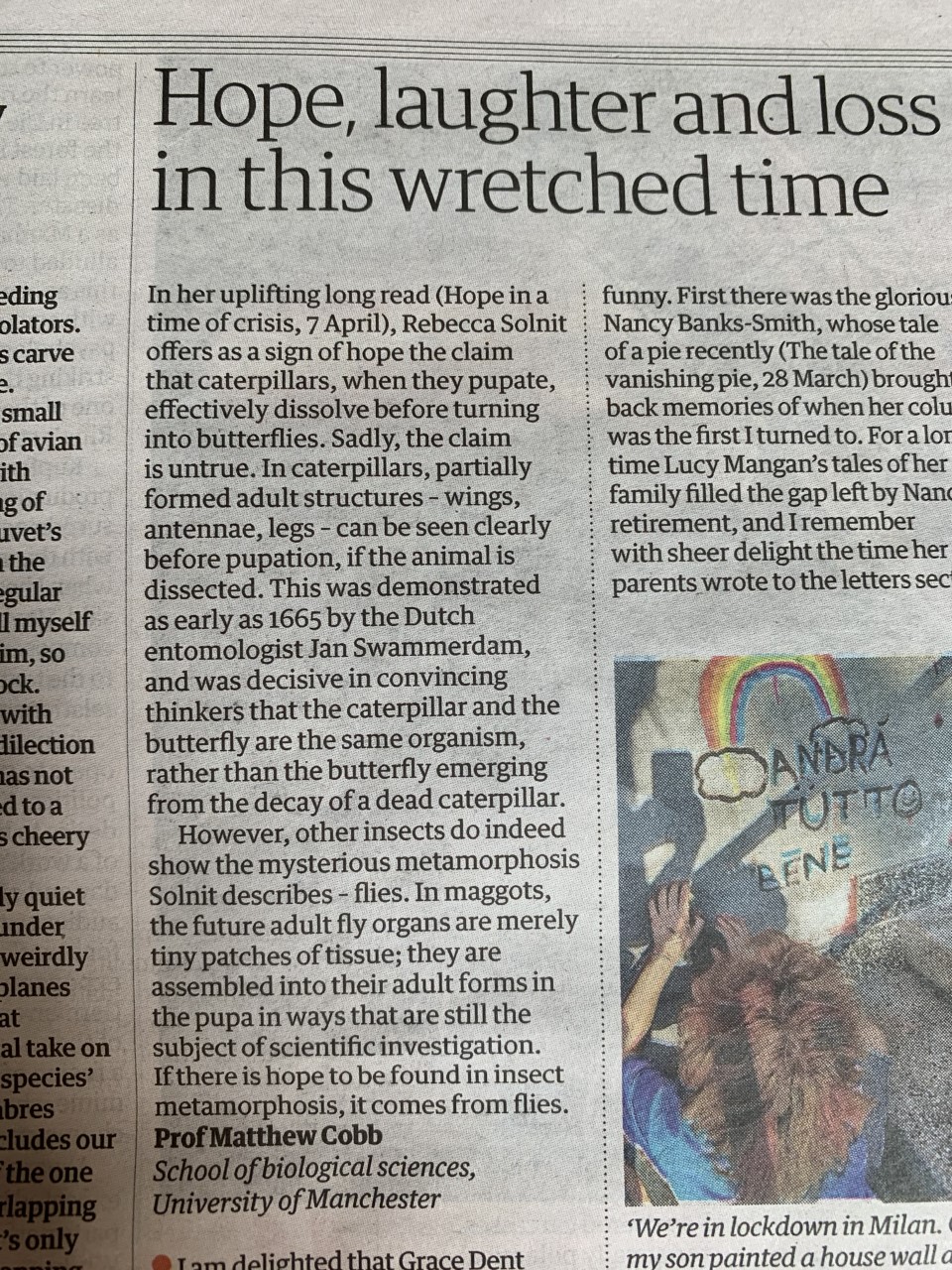 Here’s a photo of its departure on April 10, 1912. Little did those aboard, or those watching the ship, know that its voyage would end at the bottom of the North Atlantic:

Zapata, a hero of the Mexican Revolution, is shown in the photo below. Yes, many did wear sombreros; Zapata is the one seated in the middle with the big hat. But look at the diversity of headgear! Wikipedia caption: “Zapata in his characteristic large sombrero and his staff in all manner of hats” 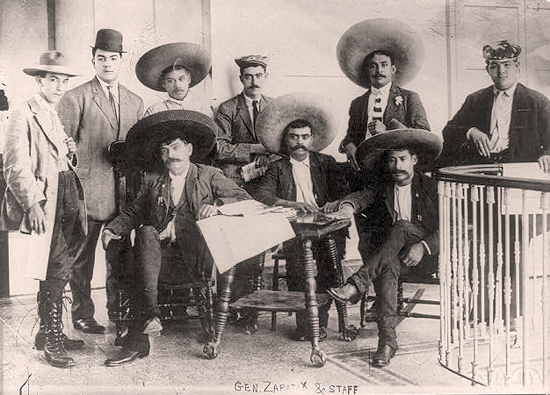 And here’s his corpse after he was killed 101 years ago today (also from Wikipedia): 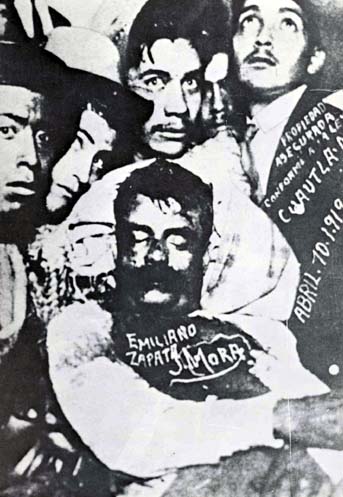 It’s a sad day for that, but I suppose the Beatles had reached their end.

Here’s the famous picture: remember it? Caption: “Visible are the crescent-shaped emission ring and central shadow, which are gravitationally magnified views of the black hole’s photon ring and the photon capture zone of its event horizon. The crescent shape arises from the black hole’s rotation and relativistic beaming; the shadow is about 2.6 times the diameter of the event horizon.”

Two facts about Sharif: he was a world class contract bridge player who sometimes contributed to a bridge column in the Chicago Tribune. Also, he smoked 100 cigarettes a day! He did quit, but died of a heart attack 5 years ago. Oh, and do you remember that, besides playing Ali in Lawrence of Arabia, he was also the protagonist of Doctor Zhivago?  Here he reunites with his great love Lara, played by Julie Christie. I really should watch this movie again:

Those who joined the Choir Invisible on April 10 include:

Evans photographed people impoverished by the Depression and their circumstances, working for the government’s Farm Security Administration and Fortune Magazine. The photo below, one of his most famous, is from the book Let Us Now Praise Famous Men, with the writing by James Agee.  It’s a poor but proud family of sharecroppers in the South (caption underneath):

Meanwhile in Dobrzyn, Hili has a first world problem:

Hili: To choose priorities is the most important thing.
A: And what is your priority?
Hili: First, I will take a nap. 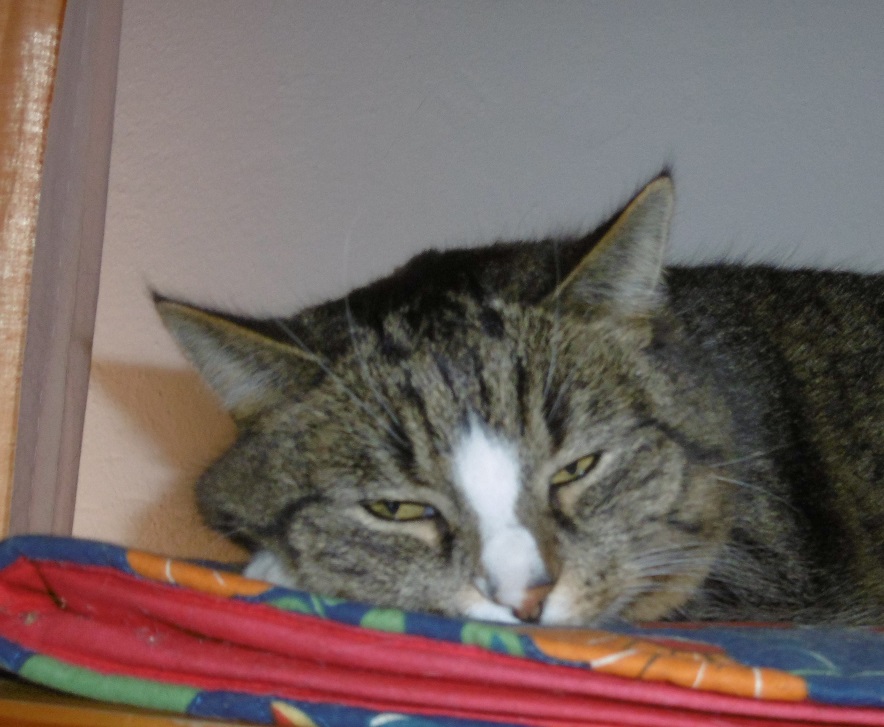 And Leon and Mitek are both in the car heading for a walk. Mietek is still awed by the world:

Mietek: The world is kind of strange. 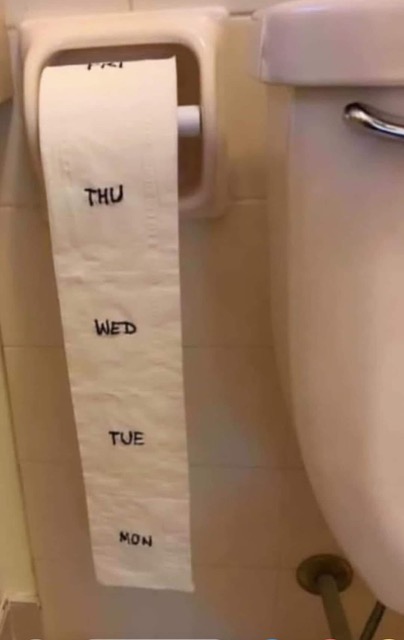 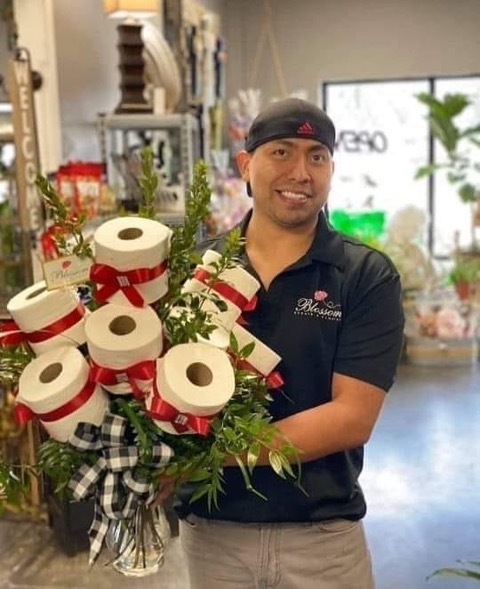 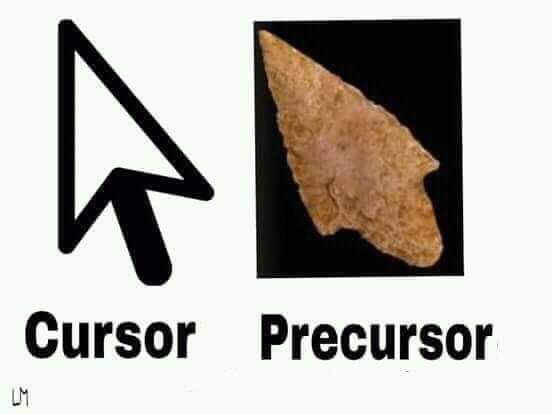 The latest from Titania. And yes, her characterization of the article is pretty accurate:

As the @Independent rightly points out, there is nothing more racist than white people who are attracted to people of colour.https://t.co/jueWLoaAL7

Two tweets from Heather Hastie. The first is what cat staff do during quarantine. But look at that amazing standing jump!

This one is pure Trump:

1. There is no iceberg
2. We won’t hit the iceberg
3. We barely touched the iceberg
4. Nobody could’ve seen the iceberg
5. These deaths mean my plan worked
6. I’m the best captain ever

Tweets from Matthew. He says this dystopian photo of London is genuine:

Anxiety-provoking rescue of mallard and offspring, but it apparently all turns out o.k. Sound up on this one.

Now this overabundance of offspring, the vast bulk of which will die right after birth, is a bit of a mystery. Do you have a solution?

This time of year, #TasmanianDevils give birth to around 40 tiny babies, which then crawl towards the pouch. Female devils only have four teats, so only the first four babies to attach to a teat will survive.#fieldwork #Tasmania #MammalWatching #WildOz pic.twitter.com/X69hQuEOjM

A lovely “V” of migrating geese. Sound up, please:

@IMcMillan @CathBrooke @skippko just back from early walk and saw this above Princes Park: turn up volume, the sound is beautiful pic.twitter.com/fbqvq4dFjx

And SPOT THE CAT!  I looked for a while and couldn’t find the damn cat, but many people claim that it’s easy.