The new Jesus and Mo strip, called “phony,” came with an email message:

Prophetic medicine is a thing, and Mohammed did indeed prescribe camel urine, as described in this astonishing hadith: [JAC: I’ve reproduced it below.]

Anas said, “Some people of `Ukl or `Uraina tribe came to Medina and its climate did not suit them. So the Prophet (ﷺ) ordered them to go to the herd of (Milch) camels and to drink their milk and urine (as a medicine). So they went as directed and after they became healthy, they killed the shepherd of the Prophet and drove away all the camels. The news reached the Prophet (ﷺ) early in the morning and he sent (men) in their pursuit and they were captured and brought at noon. He then ordered to cut their hands and feet (and it was done), and their eyes were branded with heated pieces of iron, They were put in ‘Al-Harra’ and when they asked for water, no water was given to them.” Abu Qilaba said, “Those people committed theft and murder, became infidels after embracing Islam and fought against Allah and His Apostle .”

Help Jesus & Mo stocked up with prophetic medicines at this difficult time by becoming a Patron here.

I’ll add that, in India, some government officials are touting cow urine as a cure for coronavirus. (The Hindu-centric Modi government pushes the line that the urine, dung, and milk of sacred cows is a curative.)

And, as is so often true, Mo instantiates pure hypocrisy (one of the themes of the strip): 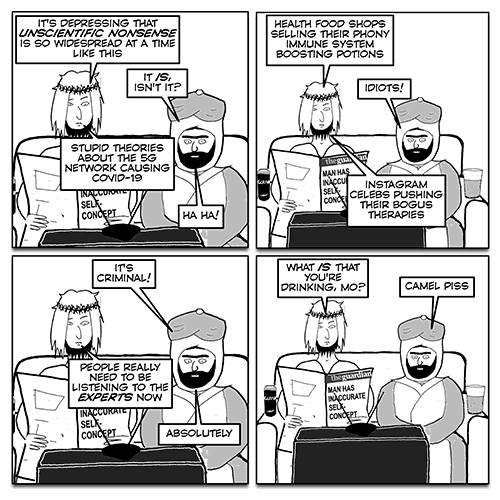 There’s also a new J&M book, with a foreword by Jerry Coyne, including all the strips dating back to Nov 2015 here.