Today is the 60th birthday of reader Hugh Dominic Stiles, who posts under “Dominic” and is known to his friends as “Dom.” (See the birthday section of today’s HIli Dialogue.) Dom’s contributed a lot to this site over the years, both through commenting and sending me tons of interesting items, and I thought I’d give him a shout-out. He works for the medical library at University College London, but, like all UCL employees, can’t go back to work for a while. Dom’s friend Jeremy sent me the notice of his birthday and a photo of Dom, as well as a short narrative of his life (indented below).

I first met Dom when he was a stonemason at Chichester Cathedral in the early 1980s. He subsequently moved to St Paul’s Cathedral in London, where he concealed his underwear, together with runic curses that he had etched into lead, in places where they might not be discovered for several centuries to come. While at St Paul’s, Dom was able to give those of us lucky enough to be his friends tours in which he had access to areas the general public could never dream of visiting.

Dom loves cold, wet, and generally disagreeable weather. This was possibly a factor in his choice to study in Norway, where he obtained his bachelors degree. He is extremely modest, despite being the cleverest person I know. Whether the subject is history, geography, biology, or something else, Dom always has a knowledgeable and interesting perspective.

I’m including a photo of Dom taken by one of my kids about five years ago. It’s a perfect example both of his silliness and the fact that he always has his head in a book! 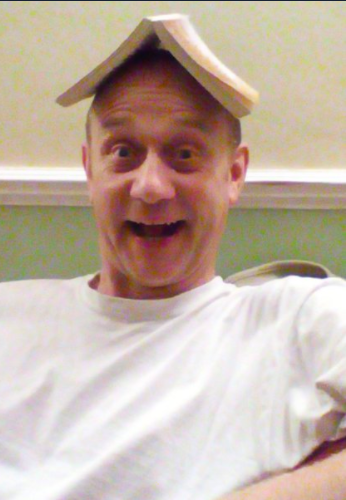 On another note, I’d like to revive the “photos of reader” feature during quarantine, so if you’d like to be featured, send me a photo of yourself doing whatever you do while locked down (2 photos max) and a very short explanation or narrative. Thanks!

26 thoughts on “Photos of readers”