Today we have photos from Chile by Joe Dickinson, who was kind enough to include food photos for my benefit. Joe’s notes are indented:

Here are some photos from a recent trip to Chile that we stuck with in careless disregard of CDC admonitions (i.e., that people of our age should in no circumstances get on an airplane).  Knowing that you are a bit of a “foodie”, I’ve also included some shots of former wildlife (mussels and clams) being converted into a unique and delicious meal.

Not exactly wildlife, this monkey puzzle tree (Araucaria araucana) was one of several on the grounds of our hotel, which were set up more as a botanical garden than formal landscaping. 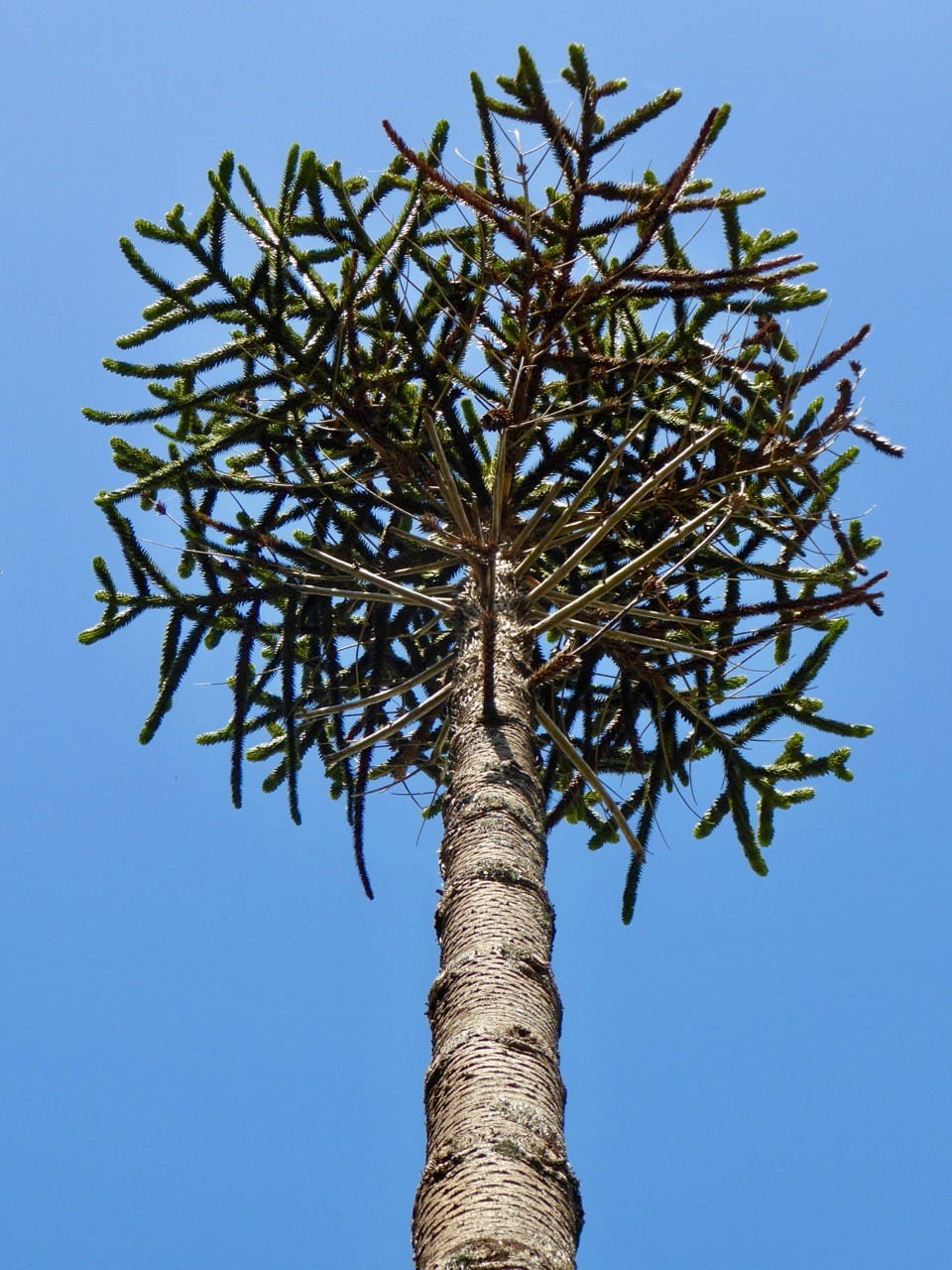 Black necked swans (Cygnus melancoryphus) seemed to be quite common.  It is the largest species of waterfowl native to South America.  Is that an oystercatcher in the foreground? 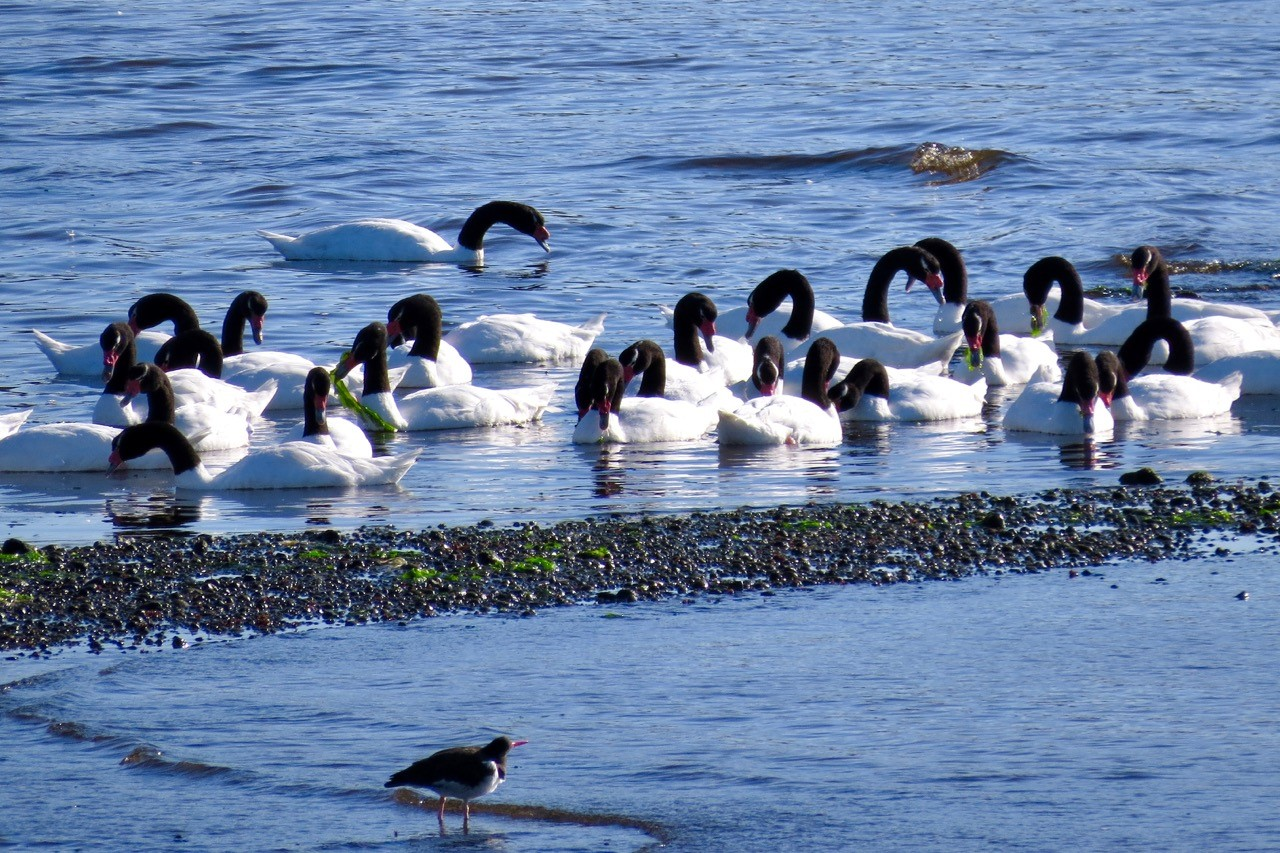 Of, I believe, two species of penguin found on the Chilean coast in temperate latitudes, we saw only the Magellanic penguin (Spheniscus magellanicus). 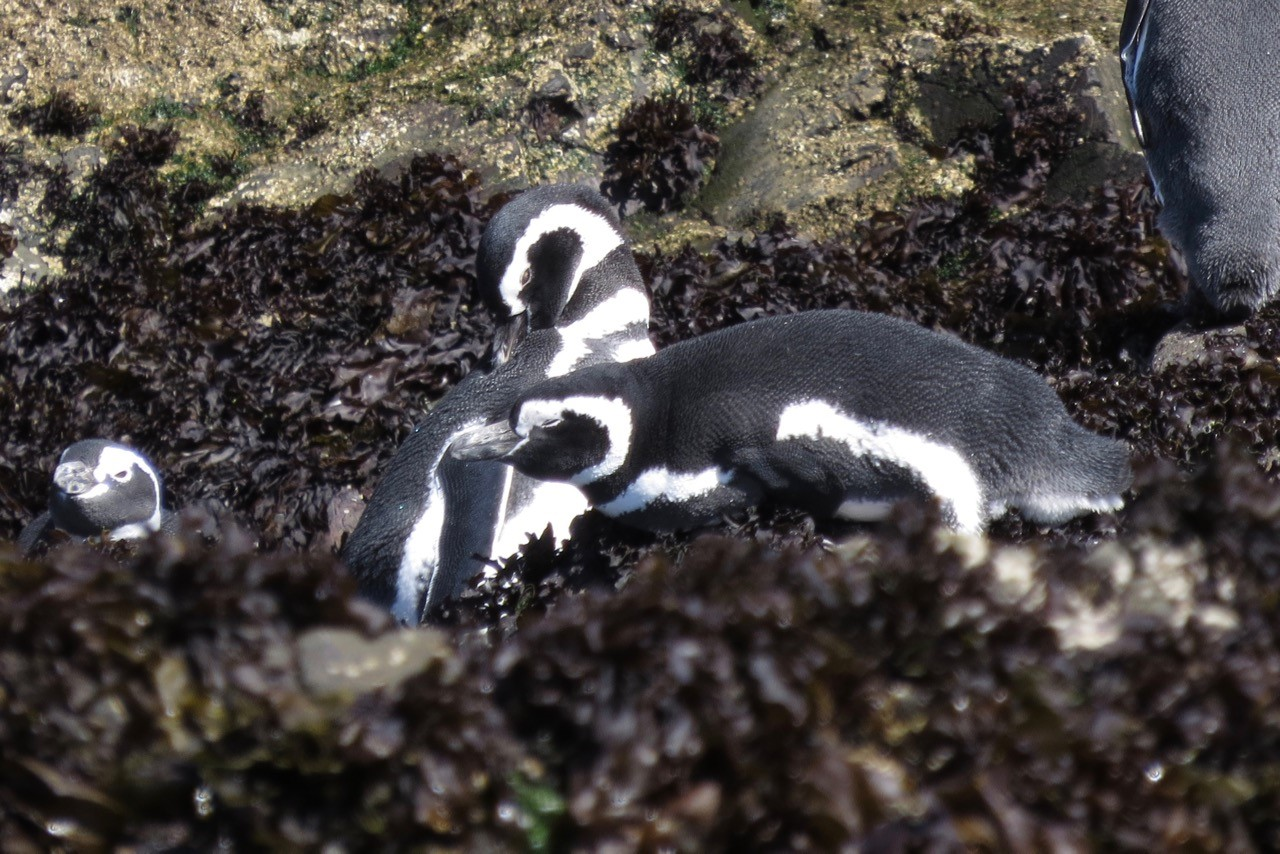 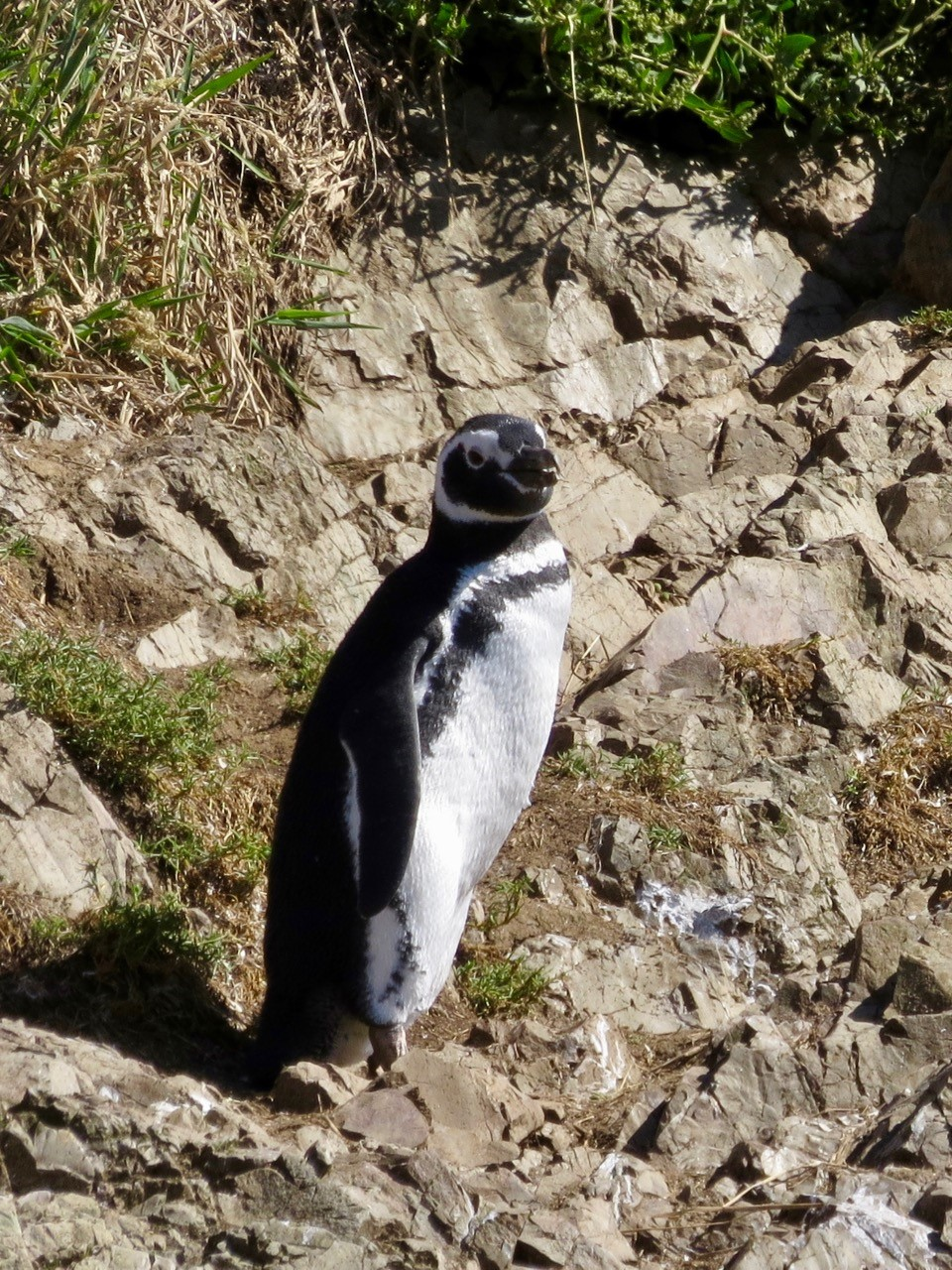 I first thought this individual had some sort of parasite, but I now believe it is just molting. 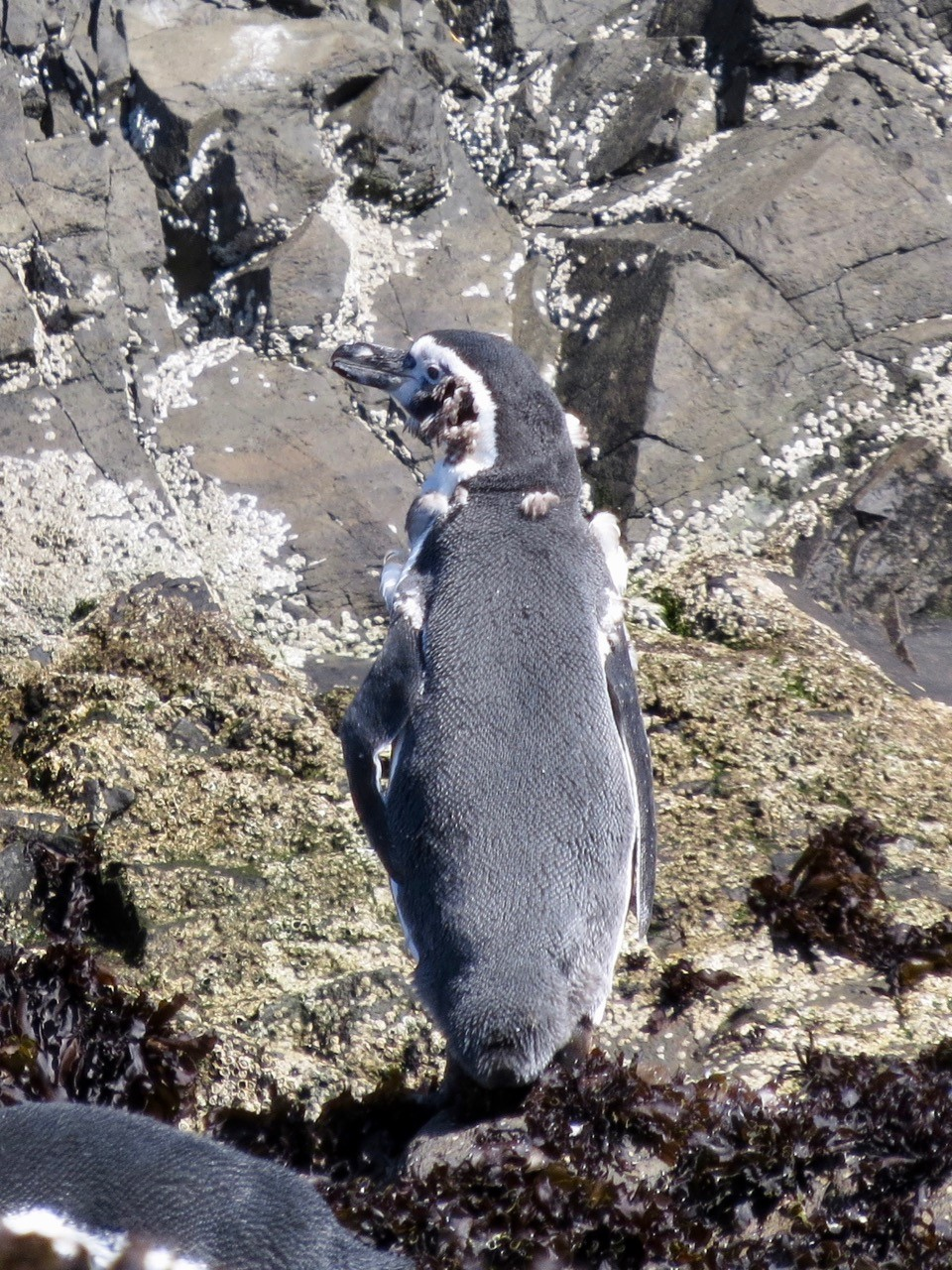 When I first saw a gull eating a starfish (which they swallow whole) I thought “this can’t end well for either party”, but it turns out to be pretty common.  I presume that birds have digestive and respiratory tracts that do not intersect in a way that allows choking.  I can’t identify either species in this case. 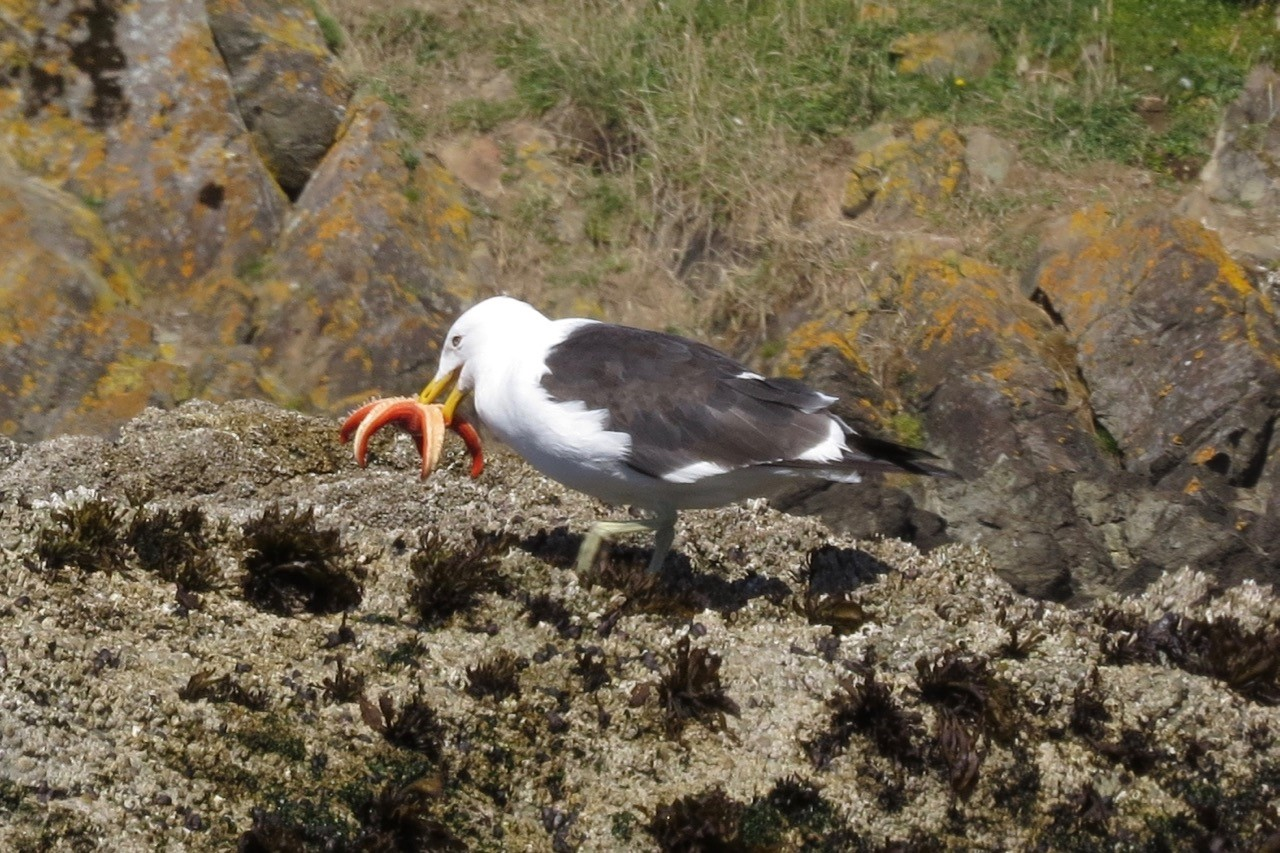 These are neotropic cormorants (Phalacrocorax brasilianus).  Such graceful birds. 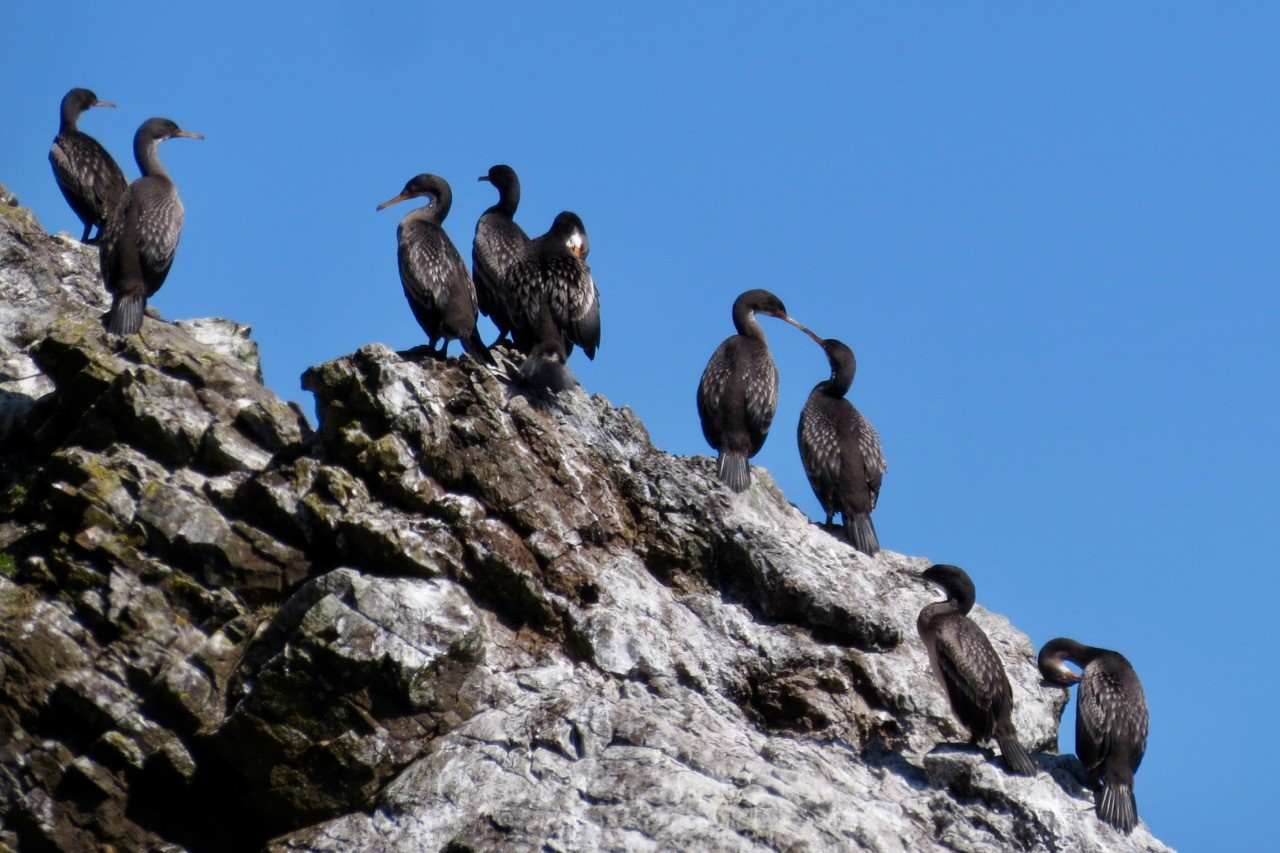 Again not exactly wildlife, Chileans claim the oldest purebred line of horses in the Americas [JAC: “Criollos“].  Surrounded by the Pacific Ocean, the Andes and the Atacama Desert, the lineage has remained isolated since introduced by the Spaniards. 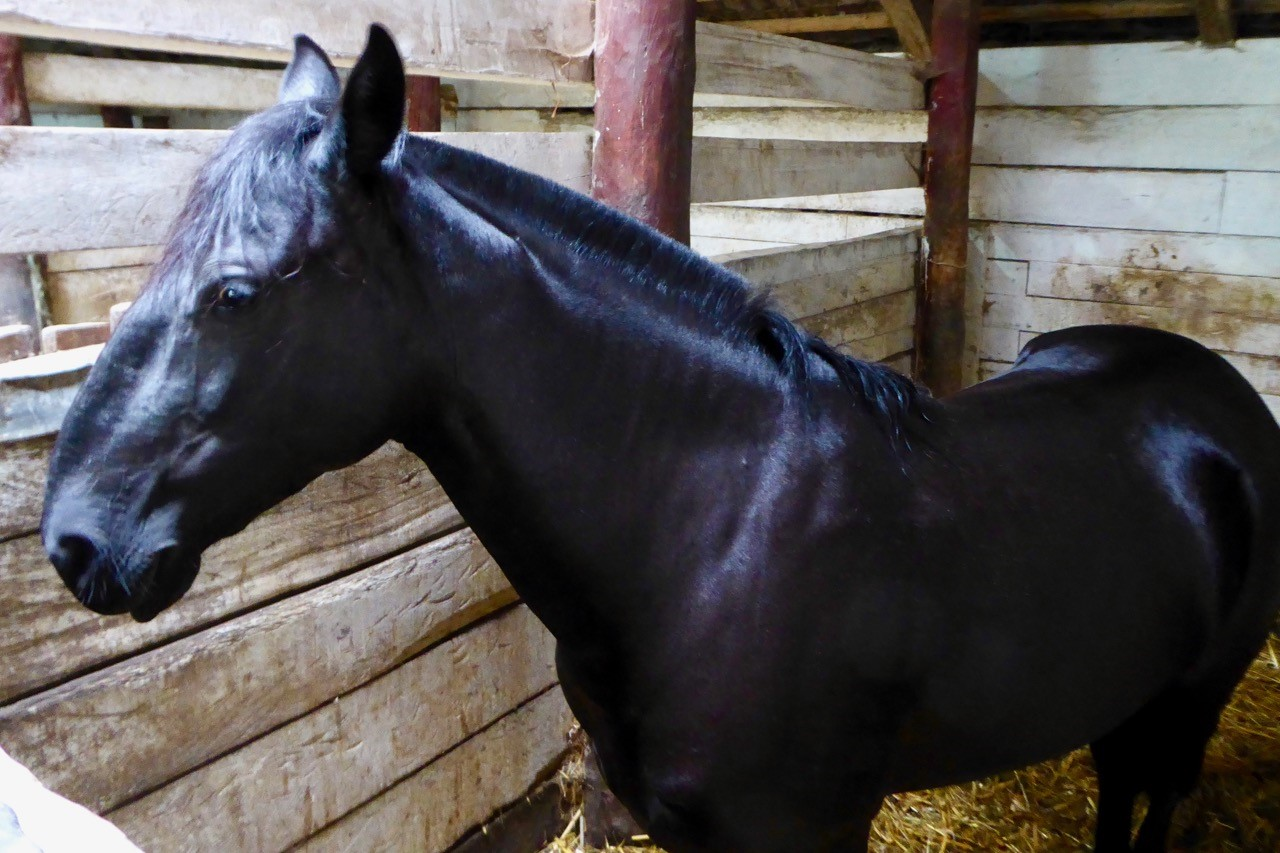 The Chilean mussel (Mytilus chilensis) was the main ingredient for a traditional meal cooked in a pit over heated rocks and covered with rhubarb leaves and then sod.  Some of the diverse local varieties of potato also were featured along with some pieces of pork and potato dumplings that looked more like pancakes. 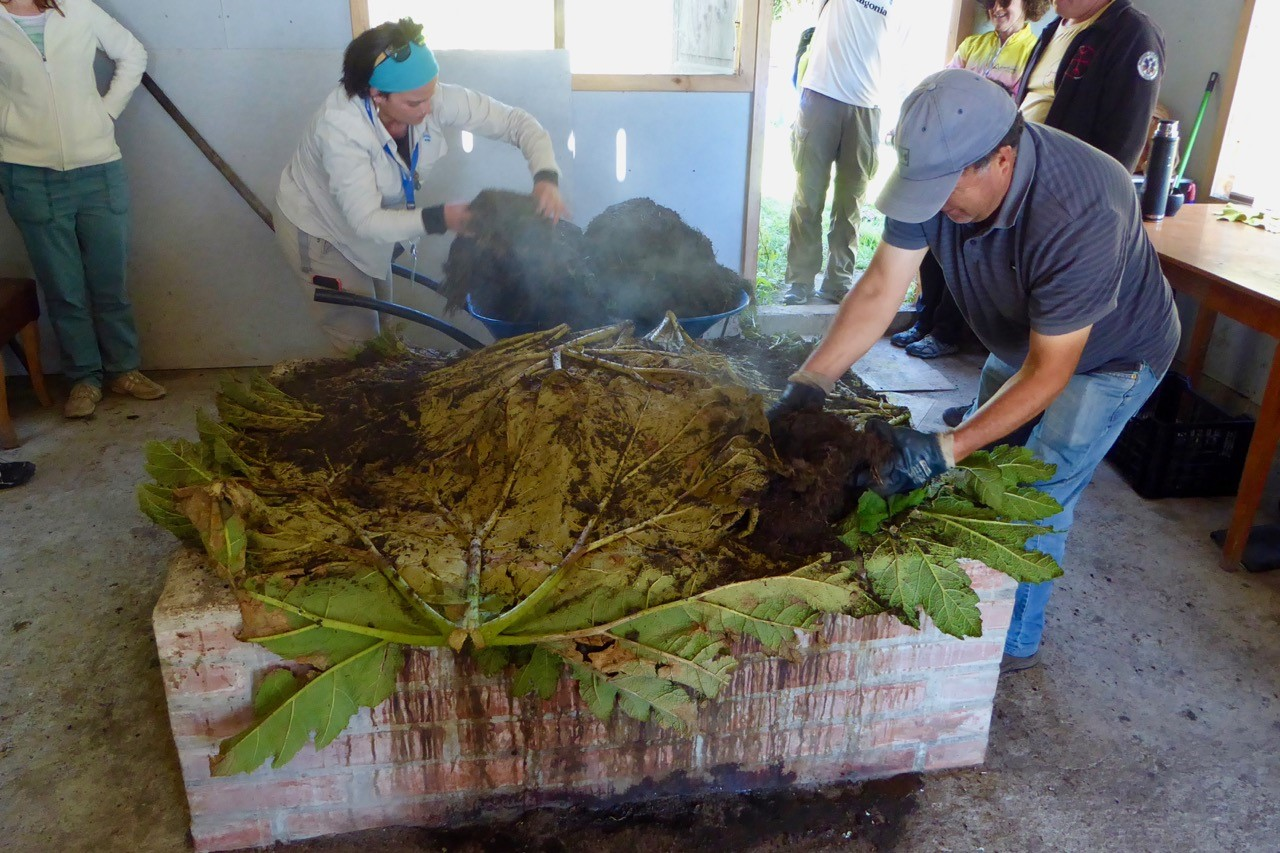 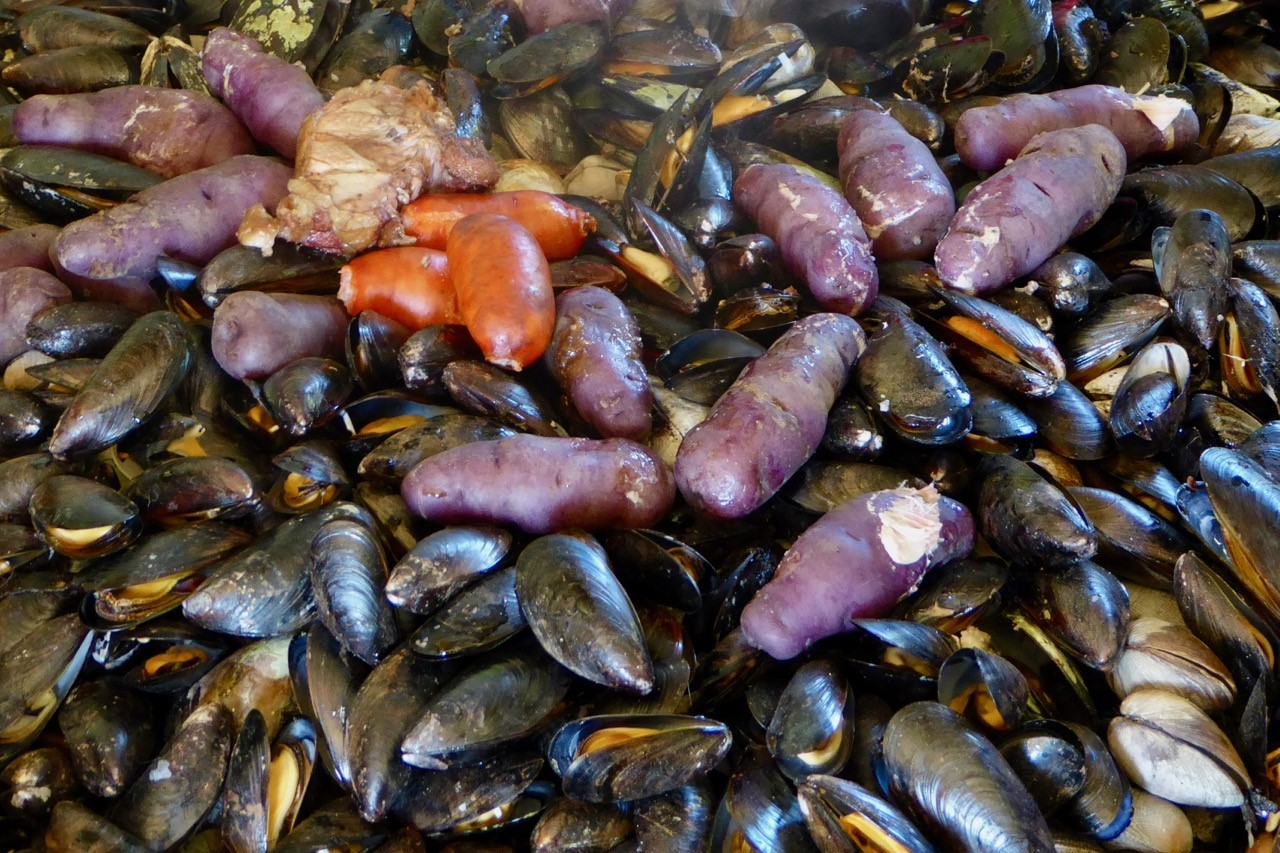 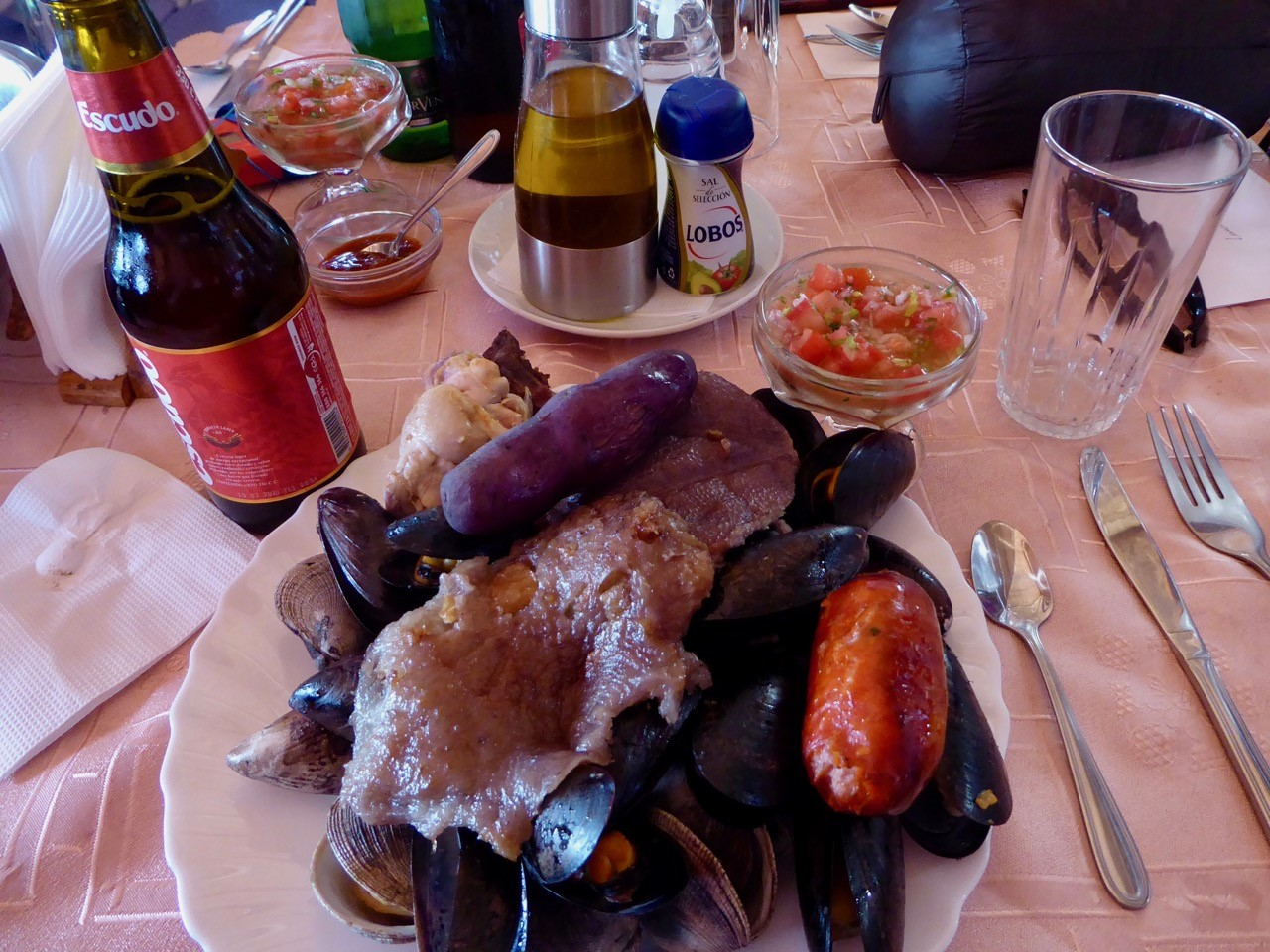 Finally, neither wildlife nor food, this “Lady of the Lake” sculpture represents a mythical figure who gave fishermen clues as to when it was safe to go out.  She dances here in front of the Fugi-like Vulcan Osorno seen from Puerto Varas. 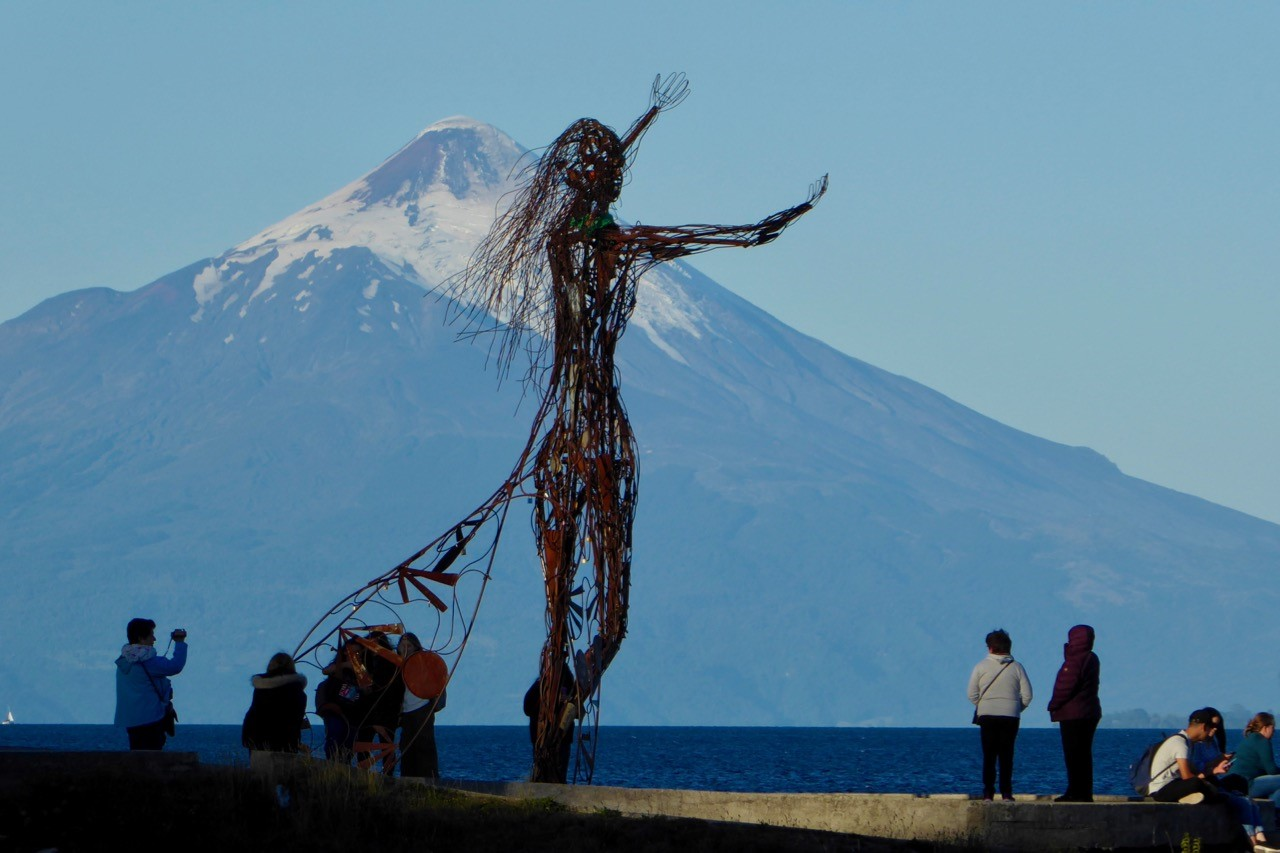