Well, here we see a snake employed as an American professor (of sociology) as well as a dean in a respectable university. Meet an unhinged, muddled, lying, and hate-spreading academic: Seif Da’na, a Palestinian-American Professor of Sociology at the University of Wisconsin-Parkside (UWP).  He’s not only a tenured professor there, but also an associate dean and a departmental chair. And he teaches these classes listed on his website:

One wonders if he passes on his palpably crazy views to his students, or instills them with hatred on completely bogus grounds.  A short video and transcript of what he said in a recent t.v. interview can be seen by clicking on the screenshot below. (I note that Da’na appears to be an anti-Zionist as well, claiming that the entire country of Israel is a “pure settlement.”)

The 1.75-minute excerpt is posted on the MEMRI site, and comes from Da’na’s interview with Manar TV, a Hezbollah operation from Lebanon. Here he says a bunch of insane things about Hitler, about Hiroshima and Nagasaki, and, most of all, about the U.S. possibly making and “leaking” Covid-19 as a way to subjugate and kill people in other countries. (Too bad the scientists who might have “leaked” the virus didn’t anticipate that it would come back to the U.S.!)

Click on the screenshot below to go to the MEMRI site:

And you can see the video clip by clicking on the video at the same site. 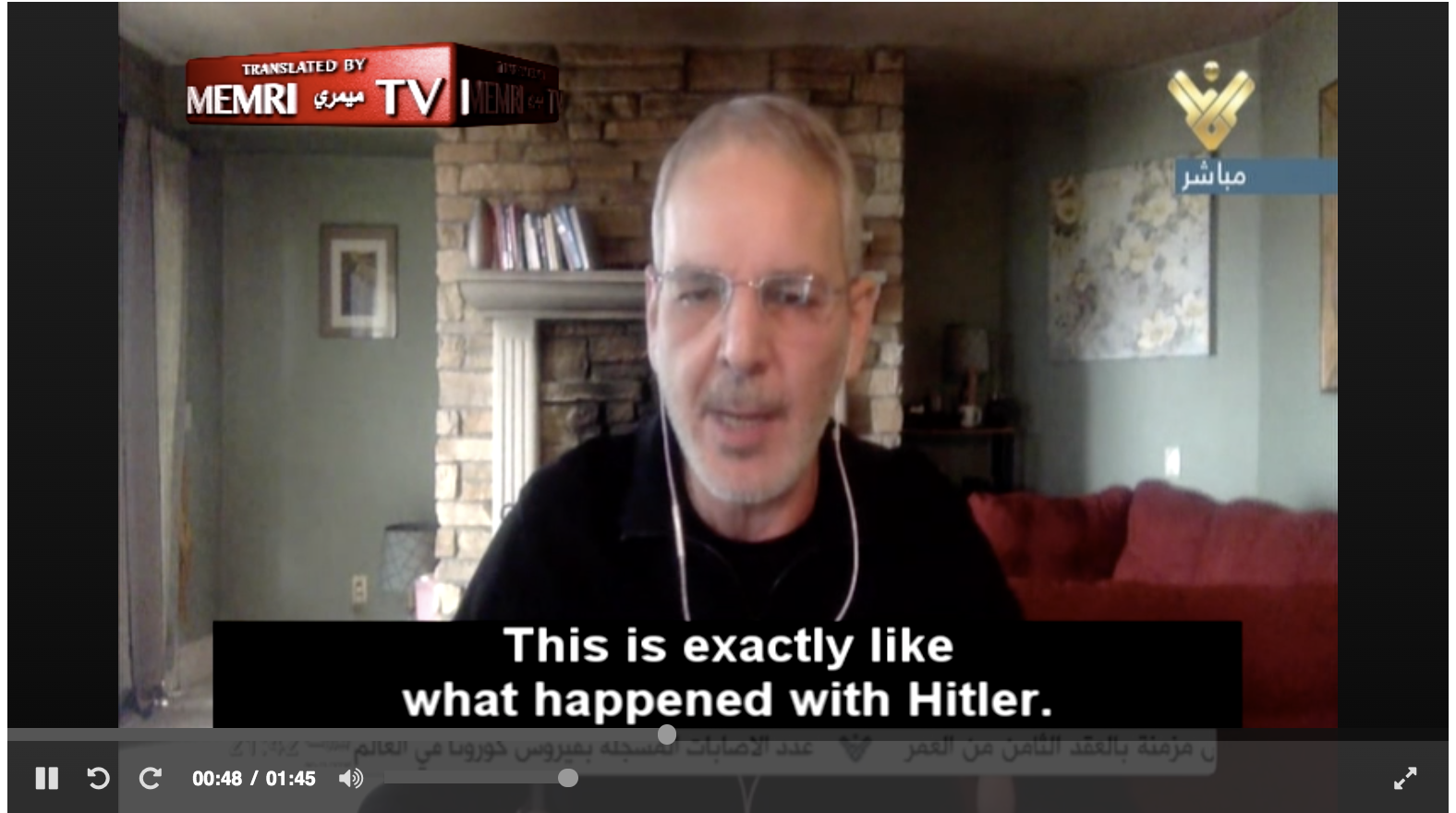 Da’na is not far away from me: UWP happens to be where Greg teaches, but he notes that he was unaware of Da’na’s views until I brought them to his attention this morning, and adds that he doesn’t agree with the views expressed in this clip.

Here’s MEMRI’s transcript of what Da’na says, where he suggests that this might be a conspiracy, but slightly hedges his words so he doesn’t claim it outright. But you get the gist of what he’s saying:

Seif Da’na: “[Regarding the coronavirus] – more people die every year not just from diseases that you can get vaccinated for, like malaria – from which half a million people [die] in Africa – but also from the West’s economic policies – at least in the 20th century and the two decades of the 21st century. More people die every year from the consequences of these economic issues than from what is happening now.

“This is exactly like what happened with Hitler. Hitler did not do anything out of the ordinary. He did not do anything that had not been done by the Europeans before. In the colonial days, in the countries of the [global] south, they would kill hundreds of thousands and even millions of people. Hitler came to be viewed as Satan just because he did what he did in Europe.

“The question about how this virus appeared has not been settled yet. As of now, there is no ‘patient zero’ in China, and therefore, we do not talk here about a conspiracy as much as we talk about the leaking of the viruses from a laboratory at Fort Detrick in the United States.

“Perhaps this leaking was not deliberate. We are not talking here about a conspiracy, even though the U.S. annihilated two whole cities in Japan during WWII, despite this being unnecessary. They were already winning the war, but they still used the nuclear bombs.”

First, Da’na is dead wrong about there being a malaria vaccine—there isn’t one! As Greg notes, the U.S. Centers for Disease Control reports that there’s no malaria vaccine, that people are working on one, and that perhaps we’ll have one by 2030. One hopes!

Note that Da’na says that the Covid-19 pandemic might not be a conspiracy but adds that the viruses might have “leaked” from Fort Detrick, once the U.S. center for biological weapons but now, according to Wikipedia, it hosts “most elements of the United States biological defense program.” This casual, unevidenced mention of Fort Detrick, with the assurance that Da’na isn’t not conspiracy mongering, is, of course, classical conspiracy mongering: a virus at Fort Detrick “leaked” “non-deliberately”—to a city in central China? This, along with the false assertion that there’s a malaria vaccine, is the kind of stuff that gives sociology a bad name.

Finally, Da’na compares the “leaking” of the virus to the U.S. bombing of Hiroshima and Nagasaki, furthering the idea that the “release” of the virus was intended to destroy American enemies, just like the nuclear weapons.  Re the atomic bomb, Greg wrote me this, which I quote with his permission:

While there is debate about the necessity of the atomic bombings of Japan, I strongly believe there can only be legitimate questioning of the second (Nagasaki). The quite effective changes in defensive tactics adopted by the Japanese Army in response to prior Allied victories, which the Japanese Army used skillfully in the horrific battles on Iwo Jima and Okinawa (horrific for everyone, and even more so for the Japanese), meant that the invasion of the main islands would have been unthinkable. Japan could have been eventually blockaded, starved, and conventionally bombed into submission, but it would have been many months more, and almost certainly with more deaths and suffering.

Now I don’t think Da’na should be fired or penalized for expressing these views. It’s his First Amendment right, and falls under academic freedom as well. But what he doesn’t have the right to do is to assert them as facts (or, perhaps, even as unevidenced suggestions) to his classes. (I have no idea what he tells his students.) That would be the equivalent of a creationist teaching Biblical creationism (or any creationism) in biology class—in my view a disciplining or firing offense. You can say whatever crazy things you want when you’re off the clock, but academics don’t have the right to teach lies to their classes, and it’s a dereliction of duty to propagandize your class.

But I wonder if Da’na’s colleagues and administrators know that he even holds these crazy views. At least they could—as Lehigh University’s biology department does with Michael Behe—disavow them, especially since Da’na is a dean.

63 thoughts on “University of Wisconsin-Parkside professor and dean suggests, on Hezbollah t.v., that U.S. made and released coronavirus to conquer other countries, and that Hitler wasn’t so unusual in his behavior”