Every Friday reader Simon sends me a link to Andrew Sullivan’s New York Magazine column, which is always a good read, even when you disagree with him. Over the years, Sullivan seems to have not only moved to the Left (or perhaps the Left just moved further Left while he stayed where he was), but has also become more and more vociferous—and eloquent—in calling out the perfidies of the man known as our “President.” In this week’s column, another tripartite effort, Sullivan calls out the Moron in Chief for not only bungling the crisis, but missing a big political opportunity by not handling it more deftly. He also chastises people for not wearing face masks when they go out (I disagree on this, but won’t discuss it here), and then finds some good amongst the viral horrors, including a benefit I had overlooked. 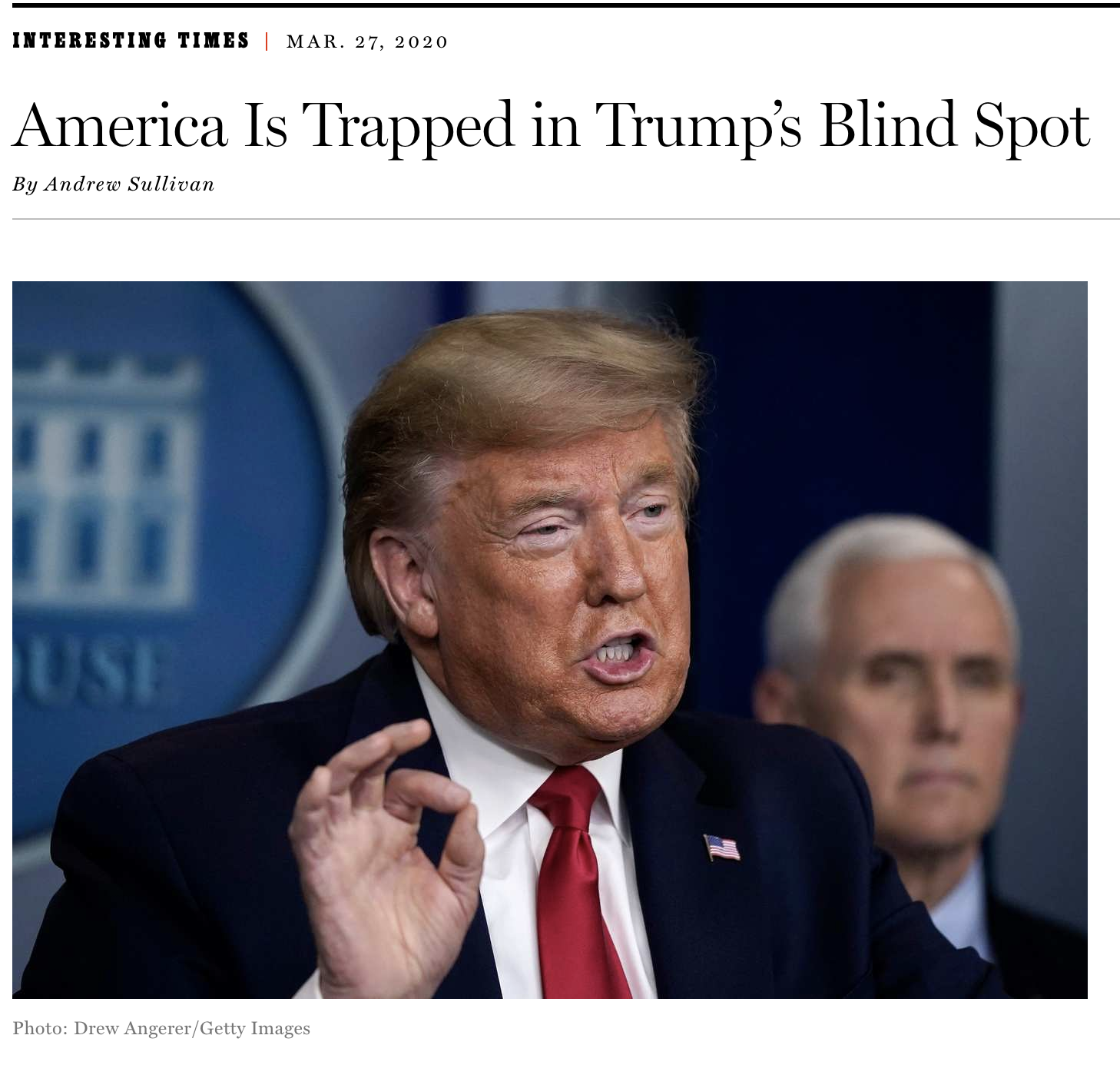 As usual, I urge you to read it for yourself, but will give a few excerpts:

First, let’s reprise Trump’s statements on the pandemic for those misguided souls who claim he’s done a good job and steered a steady course. Sullivan mentions Trump’s travel ban to and from China for non-American citizens and residents, noting that, according to people like Steve Bannon and Tucker Carlson, this could have been his big popularity moment had he followed it up with further decisive action. But. . . .

And then what? Nada. Actually, worse than nada. Trump immediately reversed himself on the threat, stomped all over his political advantage, and pooh-poohed any kind of news that might rattle the markets. You know the series of staggeringly inept, false, and delusional dismissals by now. February 10: “Looks like by April, you know, in theory, when it gets a little warmer, it miraculously goes away.” February 26: “Within a couple of days, it’s going to be down to close to zero.” February 29: “Everything is really under control.” March 10: “It will go away. Just stay calm. It will go away.” And then, of course, for maximal looniness, returning to his initial position, on March 17: “I felt it was a pandemic long before it was called a pandemic.” And then, less than a week later, he started again with the mangled metaphor that the cure could be worse than the problem.

It would be a fool’s errand to try to discern what political judgment or tactical decision led Trump to reverse himself three times (and counting). It was just how he felt on those days when he vented. The inconsistencies were resolved simply by denying them, or smearing reporters who brought them up. With Trump’s clinical narcissism, there is no rational road map to his decision-making.

Remember, though, that despite his ham-handedness, lies, and waffling, Trump’s approval rating is the highest it’s been since he was elected (the average of two polls is 47%). It’s likely that this is due to people supporting a leader in times of crisis.  But it’s still disheartening, especially in view of other polls showing the between 49% and 60% Americans approve of his handling of the pandemic. Such a rating wouldn’t suffice to support somebody doing surgery on your body or flying your airplane, but it might be enough to get the guy elected again. As I noted, I bet $100 that Trump’s mishandling of the pandemic, and the concurrent economic crash, would be enough to get him dumped in November. Now I’m not so sure. We haven’t heard much about Joe Biden lately.

Here’s what Sullivan says Trump should have done not only to help the country, but to help himself. Although they should coincide, Trump’s narcissism has made him draw a distinction between the two, and, of course, to favor the latter.

Of course, there was another way available from the get-go. He could have immediately adopted a wartime presidential posture and announced an emergency response to the threat from China. From January on, he could have deployed the government’s ultimate power to get American manufacturers to produce ventilators, masks, and tests on demand, gotten the military to set up field hospitals, and announced — and even obeyed — a partisan cease-fire because of the severity of the crisis. And he could have added another layer to this by giving a speech on the danger of over-relying on China to produce basic goods, especially those essential for Americans’ health. Then a stark and clear and unwavering stance on social distancing, to buy time. If he needed a photo op, he could have donned a hazmat suit and visited patients, like his crush, Vladimir Putin, just did.

Yes, I know this is Captain Hindsight speaking. But a man like Steve Bannon understood what this crisis could do for a populist political movement. Trump didn’t. Because, as is now apparent, he was only interested in the movement in as much as it helped him gain fame and power — or jibed with his prejudices.

Trump’s failure to grasp the politics of coronavirus is, I’d argue, a microcosm of his entire administration. As with COVID-19, Trump had so many potential advantages at the beginning, after his surprise victory. Imagine if he’d started his presidency with a massive infrastructure spending bill, followed by an immigration compromise that would have funded his wall, beefed up enforcement, but also gave security to the Dreamers. Imagine if his tax bill had been geared to help working families, rather than the superrich, or that he promised to change Obamacare by expanding it. He would have had a chance to be a transformative president.

But to do that, he would have had to have been someone other than himself. He would have to have developed a long-term political strategy, thought structurally about the country first, and seen his base as a building block to reach out to others in building a durable coalition. But as so many of us pointed out, he was and is simply incapable of this. He’s a prisoner of his own psyche, there is nothing he can do to tame it, and he will allow no one to overrule it.

So he will improvise and reverse himself again before this is over; he will turn vital government information into performative propaganda; he will undermine his own appointees; he will use the epidemic to punish enemies and reward friends; and he will be focused at all times on himself. As tens of thousands of Americans will literally gasp for air, their lungs sustained only by ventilators, he will grasp at petty slights. As social distancing becomes ever more vital, this man will want Easter churches packed with congregants. And as he lies and distorts and emotes, the casualties will mount.

Given the crisis, we have only one option. We need to listen to the experts, rely on governors, trust in Drs. Fauci and Birx, and do our bit. But we also have a more urgent patriotic task: to ignore this president until we can eventually rid ourselves of him. This is too grave a crisis to give him the respect he doesn’t deserve.

This all seems quite sound, though you may disagree with stuff like spending money on the border wall. But the conclusion is one I agree with, and contrasts with that of the commenter who wrote yesterday that we need to support Trump rather than criticize him, as criticism will make him behave even worse. To me, that’s palpable nonsense, not only because it won’t work given Trump’s history, but also because it is not just our right but our duty to criticize our leadership, even in times of trouble. After all, this is a democracy.

I’ll pass over Andrew’s call for universal mask-wearing (he is medically compromised as he has chronic asthma and presumably takes drugs to control his HIV infection), and go to his eloquent ending. It is true that the Woke haven’t been as loud lately, and I, like Sullivan, have enjoyed the respite from the obsessive and ubiquitous hectoring. Both paragraphs are great:

I also have to say how lovely it has been to have been spared the constant harping of the woke. For a blessed amount of time, they’ve become relatively silent. The virus has made our common humanity the central question, rather than our various identities. Viruses are not, it seems, social constructions, but biological realities, with qualities that are not a function of someone’s narrative, but of molecules. For a blessed period, the truth matters — not a narrative, not a construct, and not your truth or my truth, just biology and humanity in a dance repeated endlessly in human history between viruses and bodies.

And then there’s simply birdsong. As the roar of traffic evaporates, and the Earth heals a little from human assault, this is the sound you hear. Even in the center of a city, the chirping pierces through. I grew up surrounded by woodlands, awakened every morning in the spring and summer by the dawn chorus of rural England, and the sounds now floating in the urban landscape resonate deeply within me. This is their moment to shine and ours to withdraw. The world is theirs again. It always was.

And now it belongs even more to the ducks! 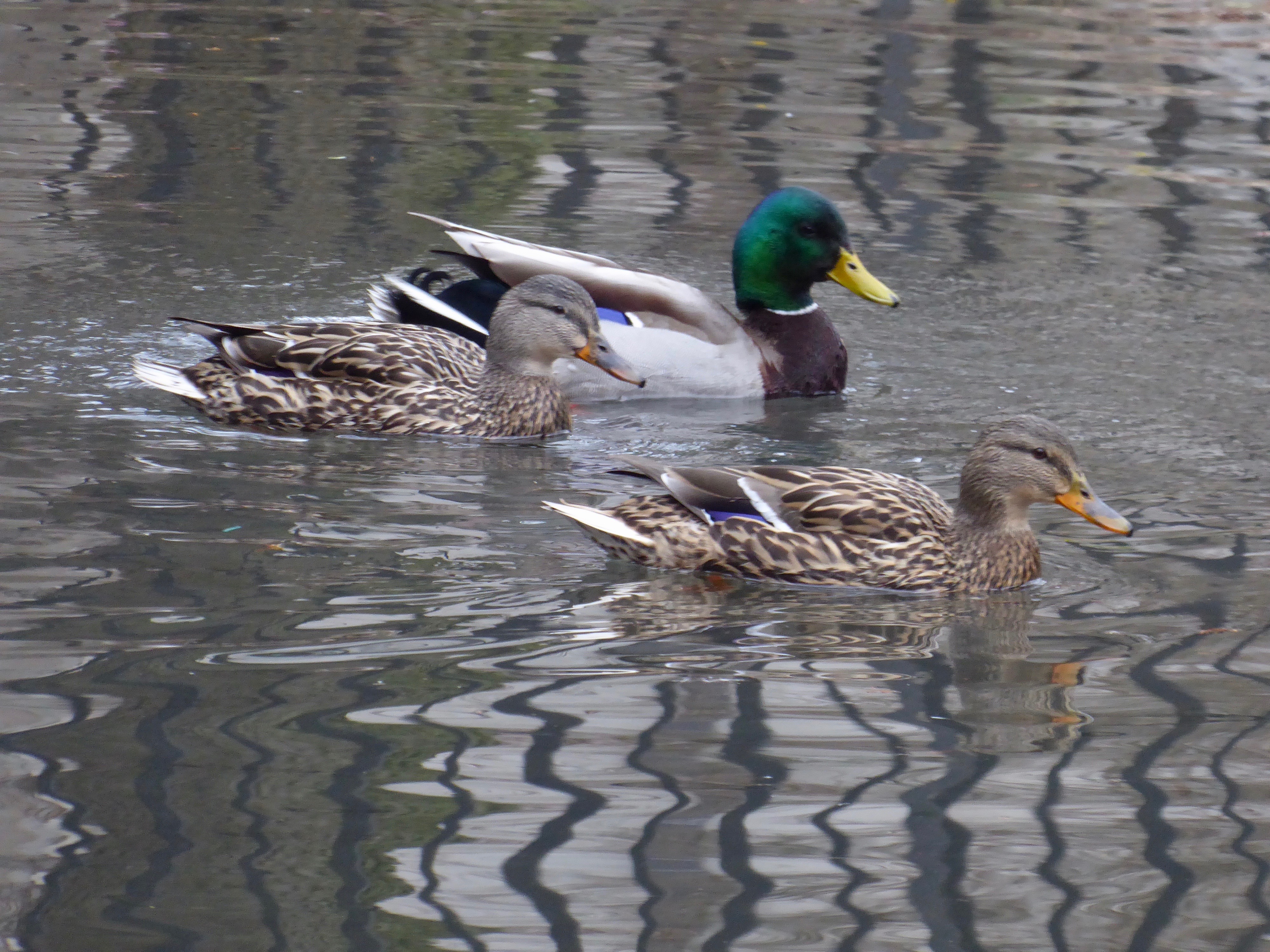 99 thoughts on “Andrew Sullivan on Trump’s bungling of the pandemic crisis, face masks, and the silver lining”