It’s Friday, March 27, 2020—not Friday the 13th, but, given everything going on, it might as well be.  Perhaps it’s appropriate that it’s International Whisky Day (make mine a Springbank). It’s also National Spanish Paella Day (in the US??), Quirky Country Music Song Titles Day (go to the link to see some, like this one), and World Theatre Day.

News of the day: We’re still headed for hell on the Red Ball Express. Every media site I’ve seen is proclaiming that the U.S. has more coronavirus cases than any other country, which is depressing, but not that informative given the differences in population size.  Boris Johnson has tested positive for coronavirus. In America, there’s no end in sight to the lockdown, and many of us are getting restless. Even cats:

Day three of lockdown; stir-craziness setting in…
Even everyday objects such as slices of lemon seem fascinating and confusing. pic.twitter.com/CuOLBEuvrF

Stuff that happened on March 27 includes:

Here’s Geronimo, who died at eighty. He had some regrets at his death:

In February 1909, Geronimo was thrown from his horse while riding home, and had to lie in the cold all night until a friend found him extremely ill. He died of pneumonia on February 17, 1909, as a prisoner of the United States at Fort Sill, Oklahoma. On his deathbed, he confessed to his nephew that he regretted his decision to surrender. His last words were reported to be said to his nephew, “I should have never surrendered. I should have fought until I was the last man alive.”  He was buried at Fort Sill, Oklahoma in the Apache Indian Prisoner of War Cemetery. 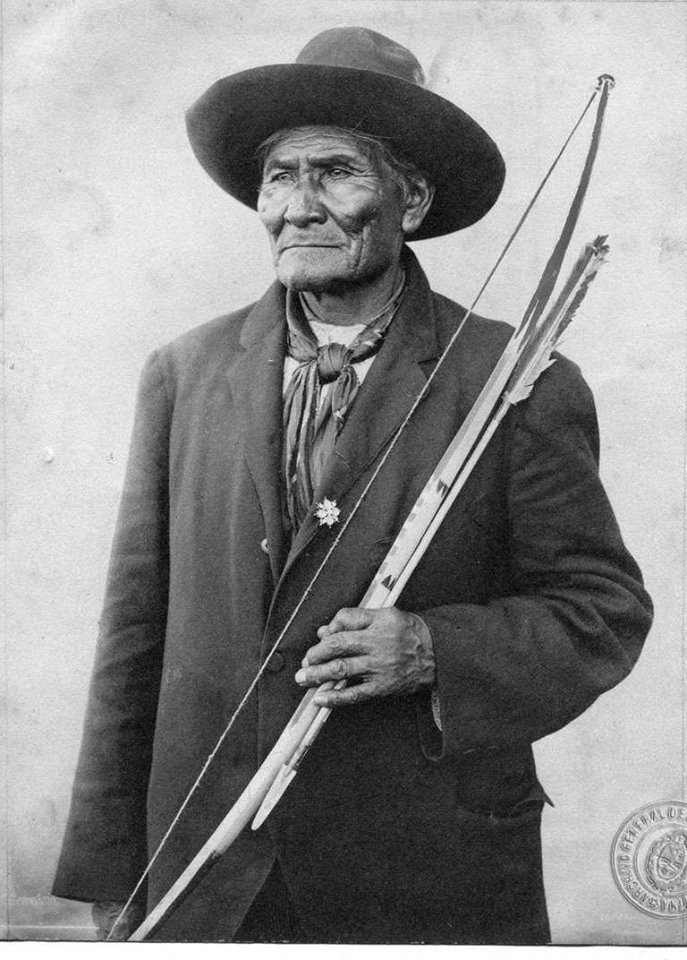 Mary’s real name was Mary Mallon. She was an asymptomatic carrier of typhoid, who during her life infected at least 51 people, of whom three died (there may have been up to 50 who died). She worked as a cook for various families, enabling the infection to spread. After a first quarantine she promised never to work as a cook again, but changed her name to Mary Cook and began cooking, infecting more people. She was re-incarcerated in 1915 and spent her remaining 23 years in Riverside Hospital in New York. Her nickname lives on as someone who spreads contagious or other noxious traits.  Here she is in a hospital bed (foreground): 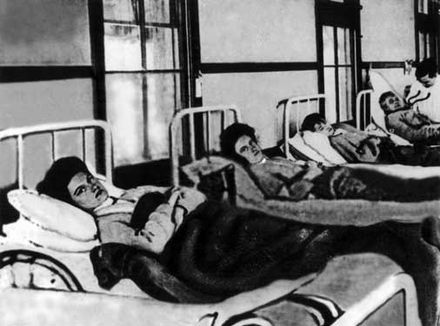 This is a photo of the collision from the Aviation Geek Club. There were 583 fatalities, and it’s amazing anyone survived. (JAC: A reader suggested that this may be a reconstruction and, given the unlikelihood that someone would have been in a position to take this photo, I agree. If you find out it’s fake, let me know.) 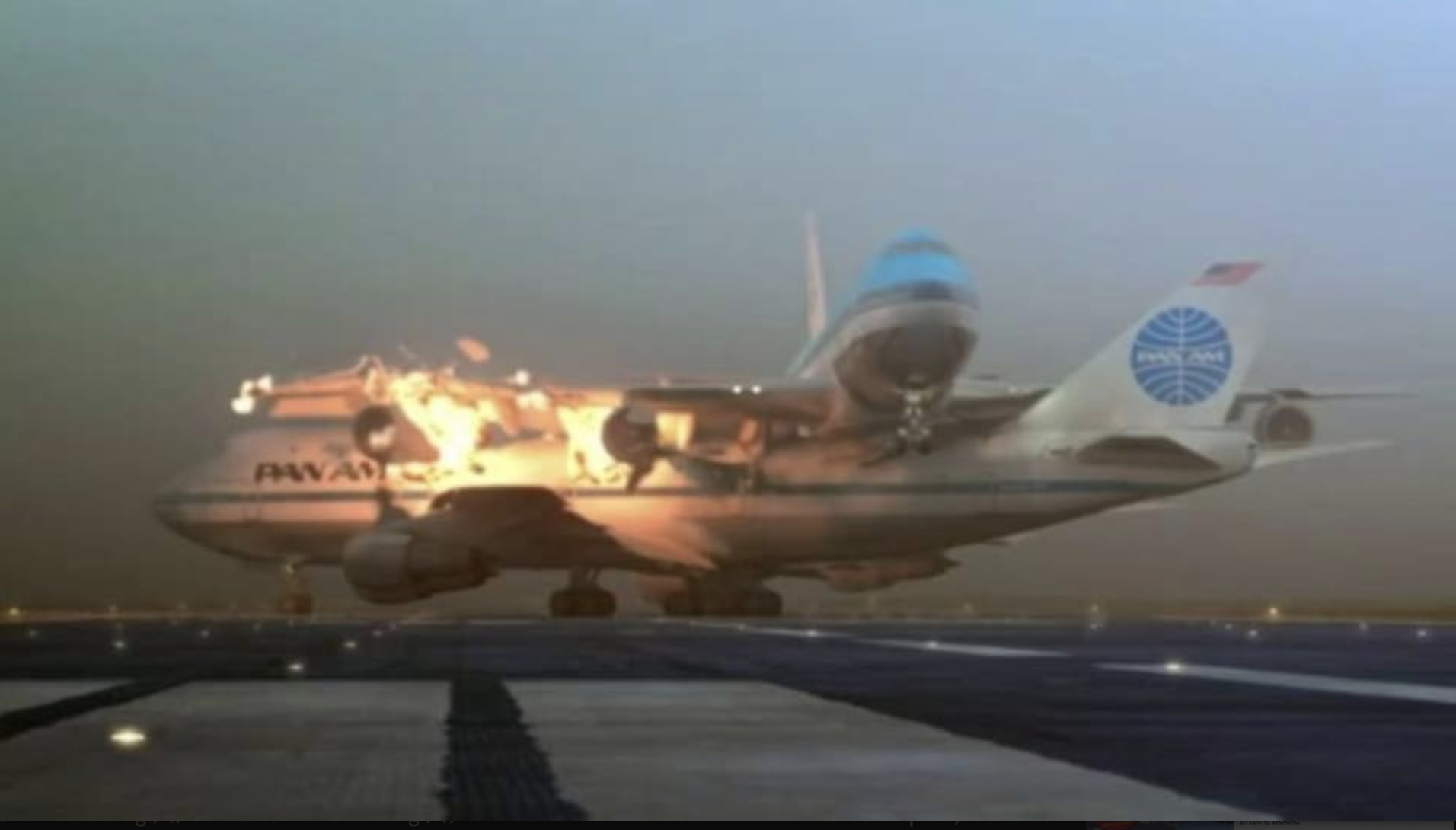 Webster’s one of my favorite jazz saxophonists. Here he is playing “Over the Rainbow”:

Those who found eternal rest on March 27 include:

Meanwhile in Dobrzyn, we have our first exchange between Hili and Szaron! Szaron is resting on the veranda:

Hili: This is my armchair.
Szaron: Time will tell. 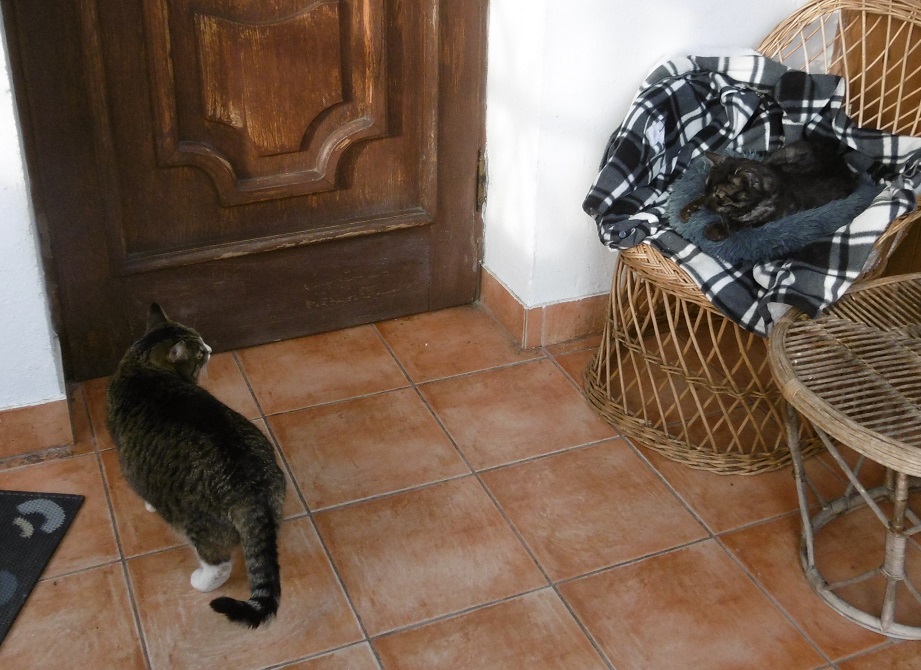 And a photo of Szaron alone, with a caption by Andrzej and translation by Malgorzata:

Szaron: We have to focus on what’s important.

Szaron continues to be tamed, and jumped into Malgorzata and Andrzej’s bed for the first time. Andrzej used the occasion to thank people here for the birthday wishes they sent him:

I thank everybody wishing me and wish the same to you in return. Szaron made himself a feast: he devoured everything that was in Hili’s bowls and went to sleep in our bed. 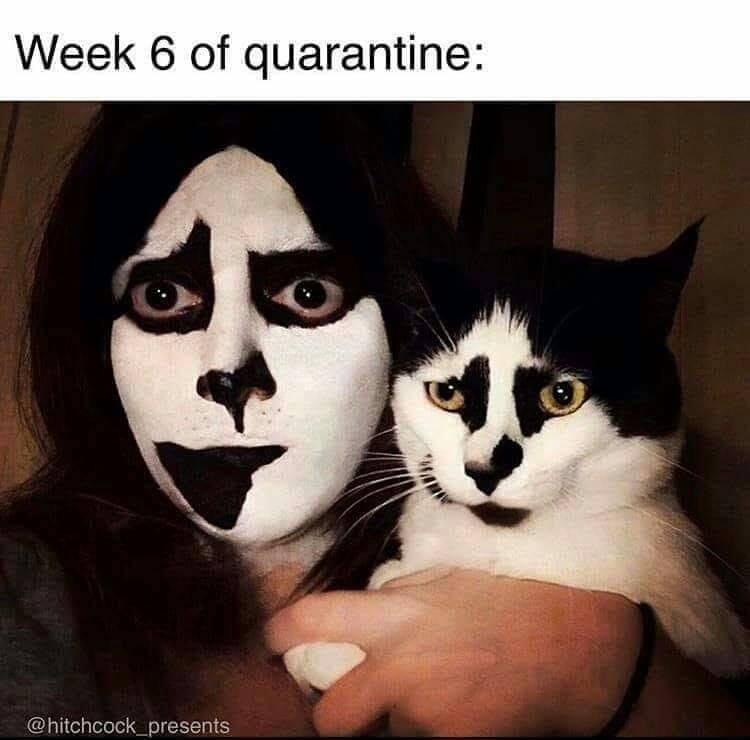 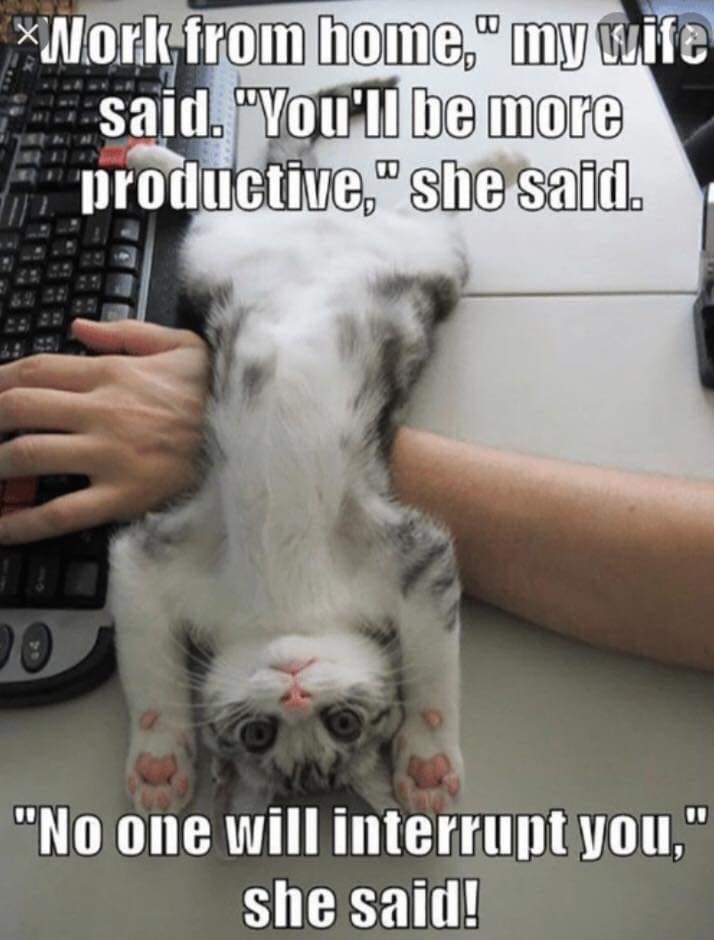 A baby platypus from Wild and Wonderful: 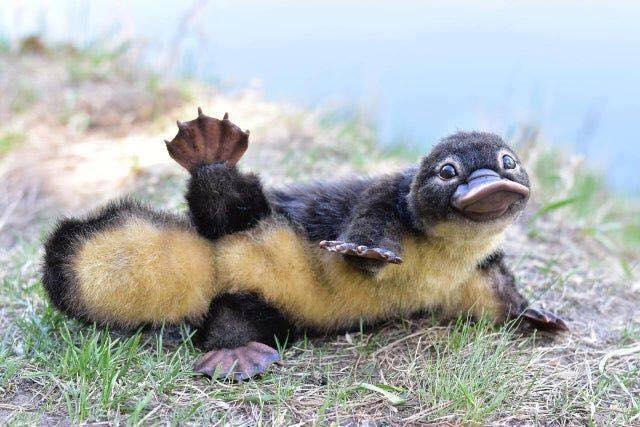 The Queen extols (but really spoofs) makeup-free celebrities, people who can’t resist flaunting their virtue of staying home while pasting themselves all over Instagram. I detest this odious self-promotion. (Have a look at the link.)

The next time someone tells you that celebrities aren’t making sacrifices for the community, just show them this… https://t.co/iRM7PaMsbg

A tweet from reader Barry. This is another candidate for Tweet of the Year, as it’s a perfect (Trump word) impersonation of Trump.

God only brought one guy back from the dead on Easter. Trump is here to bring back the whole economy on Easter 2020. Enjoy this clip (possibly, like, the best ever), share and be sure to subscribe to Making Podcasts Great Again (@TrumpPod) – new every week! pic.twitter.com/aUifVWRzfh

Two tweets from Heather Hastie. First, can people really be this stupid? The answer is, “OF COURSE!”

Please do not take medical advice from a man who looked directly at a solar eclipse.

Tweets from Matthew. First, pareidolia. Be sure to enlarge the photo:

A BBC public-health ad. This would never be shown in the U.S. (profanity!):

The BBC is now running this as a public information film between some of its programmes. pic.twitter.com/L92EuU17nk

As Matthew said, this is “amazing”:

This is the colour version of my #ISS flyby. First black and white seemed to go with processing, but colour worked eventually.
This animation is made of 4 of the sharpest frames from tonight. I marked the @spacex Dragon-1 spacecraft (CRS-20) with an arrow.@DJSnM @Space_Station pic.twitter.com/MCZ6INllZf

Finally, be sure to watch this lovely video: four whole minutes of kids and kitties: 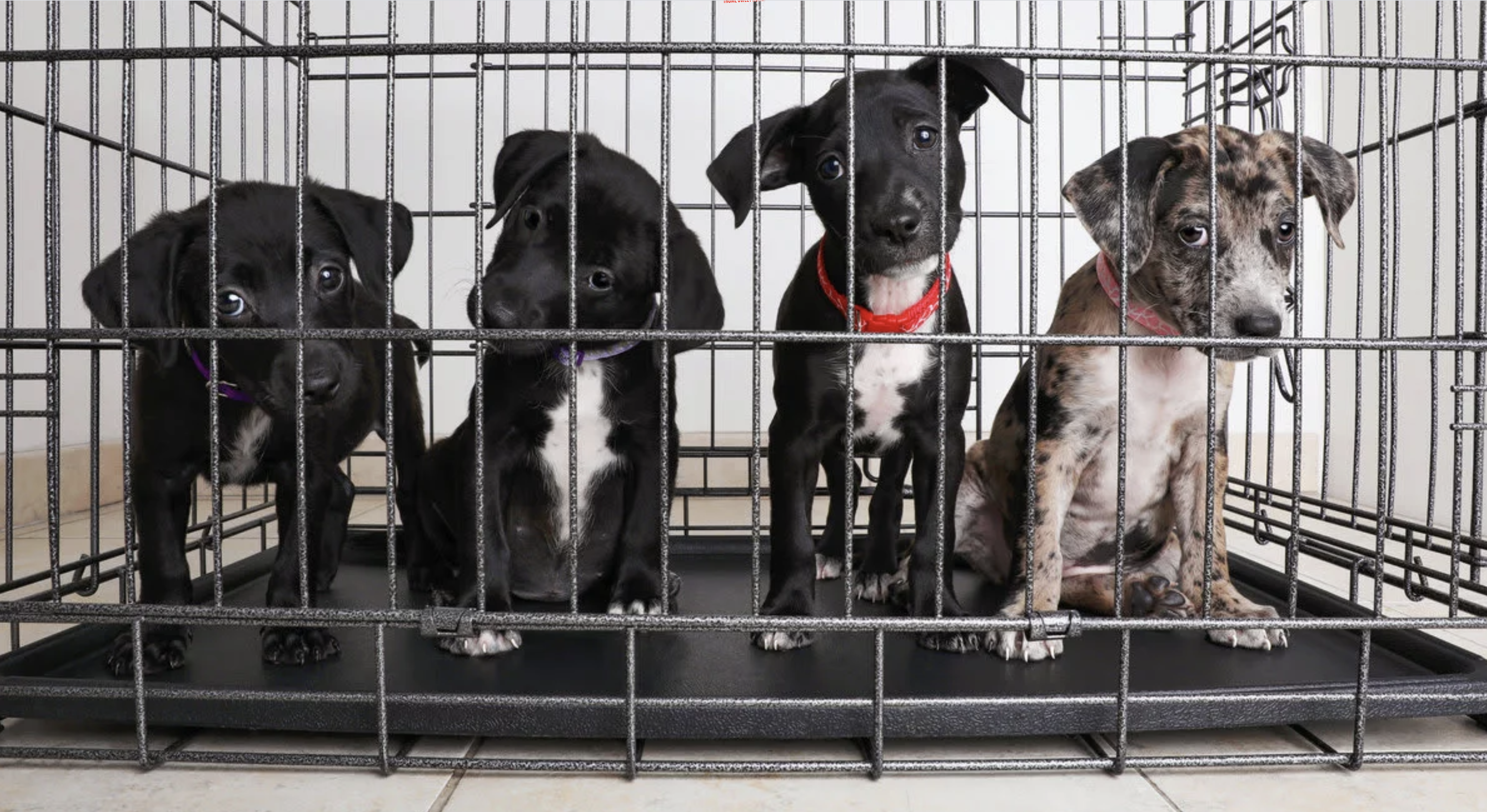