Even HuffPost can occasionally publish something useful. After all, they put up gazillions of pieces, most of them garbage, but occasionally, due to the law of large numbers, one of them might be useful. This is one example, though I already knew that the ten behaviors they singled out here were rude. Rather, I thought the piece was useful for those rude people I occasionally encounter in airports. Click on the screenshot to read: 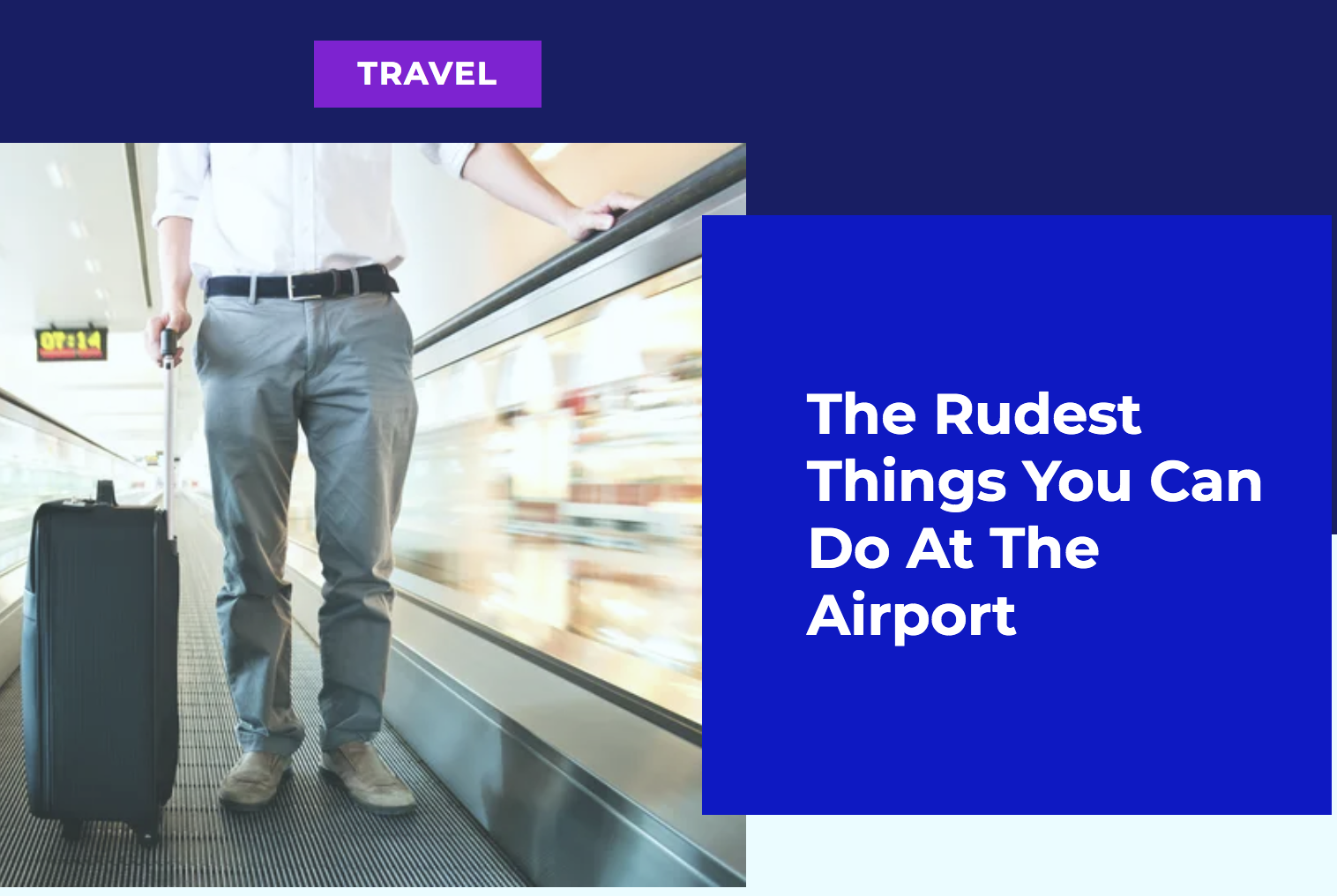 Here’s there list of ten things not to do in an airport. HuffPost’s “tips” are in bold; my comments in plain type. At the end I’ll show one example of a rude person—someone most of you have heard of.

Not Tipping At Curbside Check-In.  I rarely check luggage, but when I do (with Southwest at Midway), I give the guy two bucks. So I’m not guilty.

Holding Up Lines. What they mean is not to delay people by waiting until you’re at the front of the TSA checkpoint to get out your ID, or stand at the TSA machine, taking off your belt, shoes, etc. only at the last moment. Of course I am well prepared for this and never cause a moment’s delay. These are the same people who only get out their wallet or money at the grocery store checkout counter when they’re told the total, and fumble in their pockets or purses for loose change.

Pushing to the Front of Security. I’ve done this only once, in Calgary, Canada, when I was about to miss my plane and there was a line of roughly fifty people in front of me before security. I went to the front and asked permission of the lead passenger to go ahead. And I learned a lesson: the Canadian official said I had to ASK EVERYONE IN LINE FOR PERMISSION. So I went down the line and said loudly, “Is it okay if I move to the head of the queue? My plane leaves in a few minutes.” And, being Canadian, they all said “yes,” Ceiling Cat bless them! But I learned a lesson about Canadian politeness. That’s the only time in my life I’ve pushed to the head of any line, much less a security line. (As an excuse, Americans usually ask only the lead person, which is a cultural difference, not inherent rudeness.)

Blocking The Moving Sidewalk. This one really ticks me off: people will just block the moving sidewalk with their bodies and luggage, so I have to say “excuse me” to get by. Protip: STAND TO THE RIGHT AND DO NOT BLOCK THE MOVING SIDEWALK: LEAVE A LANE OPEN ON THE LEFT. Same on escalators.

Not Attending To Your Children.  Not a problem for me.

Getting Angry With Kids. Ditto.

Complaining About Small Things. I’ve been subject to passengers who beef and kvetch and mutter to me when lines at check-in are slow, and it makes me dislike them. Nothing is gained by such kvetching. I may feel anxious, but expressing it to others is not useful to anyone.

Swarming The Boarding Area. Another thing I don’t like. If you’re in boarding group 3, don’t hover around the boarding line when group 2 lines up. You can be alert for when your group is about to board, and try to make it to the front of the line, but DO NOT HOVER.

Blocking Terminal Walkways.  What they mean is do not walk three abreast in an airport terminal. Many is the time when I’ve been behind entire families: three or four people with their luggage, completely preventing you from passing (I walk fast). Be considerate.

Being Harsh with Airline Employees.  This is the lesson I find most important. When planes are late, or delayed, it is not the fault of the gate agent. You may suspect that they are lying to you about the reasons for delays or about estimated boarding times, or are hiding other information from you, but accusing them of that is simply rude. These people have hard jobs and are always getting yelled at. Airline counters are the one place where you simply have to be polite—if for no other reason than the agents have power to treat you or mistreat you. And when they’re especially helpful, I tell them so. Believe me: they appreciate it, for airline employees are not allowed to talk back to customers, and so must internalize their anger. Don’t be one of those nasty people like the guy below!

If you want help or information on flight delays, I’ve found it very useful to message the airline on Twitter. They’ll often help you get another flight, or give you the skinny on what’s gone wrong. And the answers come quickly—often far more quickly than from the gate attendant.

And yes, here we see a video of Young Turk Cenk Uygur—I think I posted a different one a while back—that he made after he was delayed 4 hours on an American Airlines flight at LAX.  You can watch him abuse the gate agents repeatedly, and to no avail. According to the Daily Fail (click on second screenshot below), Cenk was actually kicked off this flight after this behavior. That’s his reward for rudeness!

I swear, this guy is wound so tightly he’s going to have a stroke. . .

Cenk gets booted off (video after clicking on screenshot).  He made and posted both of these videos himself. So he’s not only rude, but clueless. This does not make him look good!

I’ve never understood why Cenk is so popular. He’s angry, rude, obnoxious, and I don’t find him at all interesting as a journalist. Perhaps, like Bill Nye, he was good back in the day, but oy, what a schmegeggy he’s become! 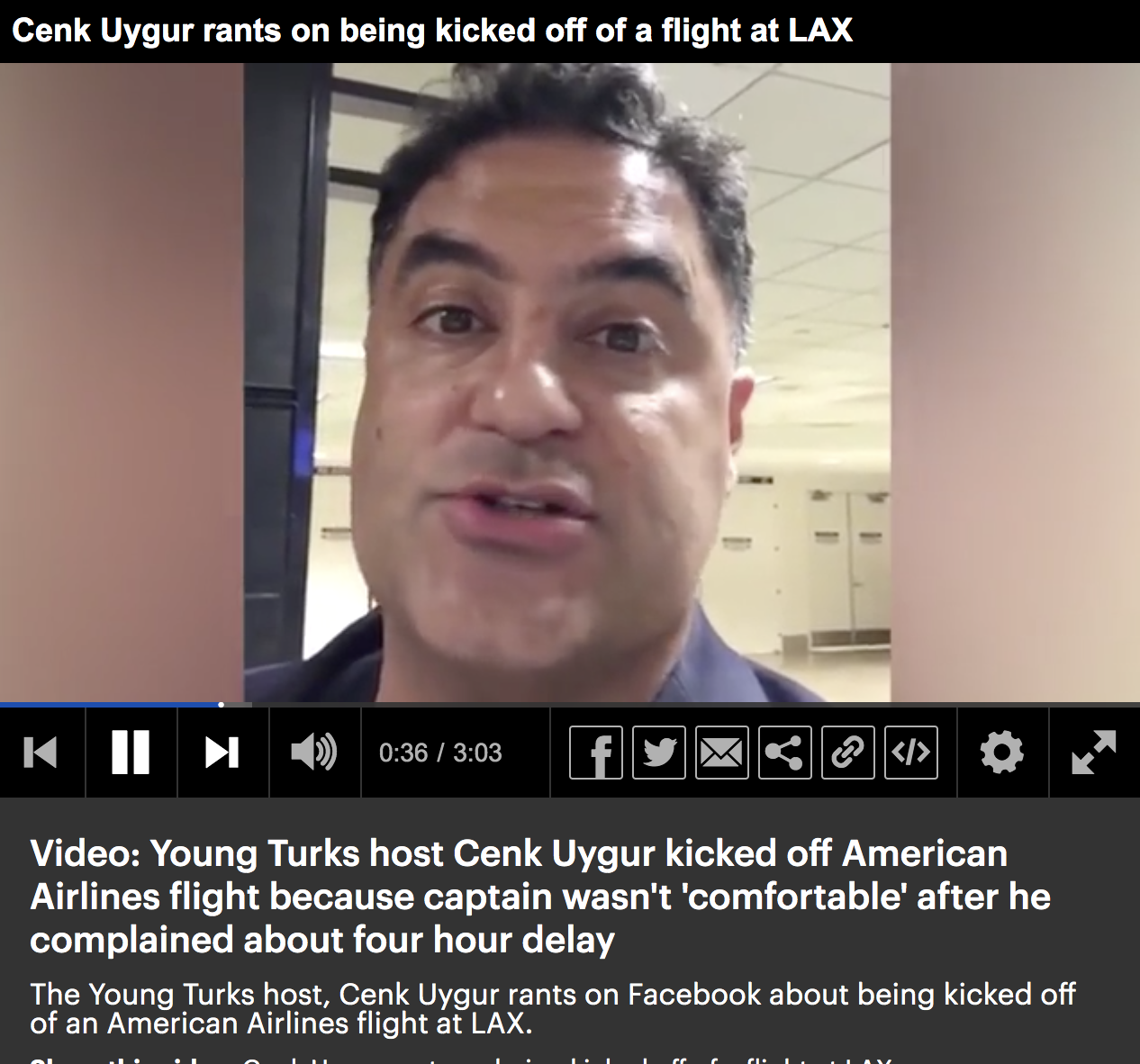 Remember, folks, be especially nice to those people who have tough jobs and are liable to be yelled at by the public.

88 thoughts on “Airport etiquette, and an example of how not to behave”