This is really infuriating: a publisher has caved in to mob mentality to cancel the scheduled publication of Woody Allen’s new memoirs.

You all know about the accusations of pedophilia against Woody Allen, which have been investigated several times, with no good evidence found that he molested his seven-year-old daughter Dylan. In fact, there’s just as much evidence that Mia Farrow coached Dylan to confect the accusation as there is that Woody Allen was guilty (see the convoluted timeline of this story here). In this era, however, accusations are, for many, as good as guilty verdicts. In some cases, like that of Harvey Weinstein, accusations were sufficiently numerous and consistent to make me conclude that he was guilty,—a suspicion borne out by the verdict in New York.

About Woody Allen, though, who knows? Although several actors have stopped working with him, others defend him, and my own view is that I have no idea what happened.

But I am infuriated at what the publisher Hachette did this week, canceling Allen’s accepted and scheduled-for-publication memoir, Apropos of Nothing, after their employees walked out. Why did they walk out? Because another Hachette author, Ronan Farrow (Dylan’s brother), published the book Catch and Kill, a well known account of Harvey Weinstein’s sexual predation and attempts to cover it up.

Realizing that his own publisher was scheduled to publish Allen’s memoir, and absolutely convinced that Allen molested Dylan, Ronan Farrow broke ties with Hachette, releasing email exchanges with Hachette in which they defended the independence of different divisions of their company to decide what to publish (the two books were handled by different Hachette imprints).

Two days after Ronan Farrow’s announcement, some employees of Grand Central Publishing, the imprint of Hachette scheduled to publish Allen’s memoirs, staged a walkout, saying “We stand in solidarity with Ronan Farrow, Dylan Farrow, and survivors of sexual assault.” Apparently they somehow knew that Dylan Farrow was a “survivor”—in other words, that Woody Allen was guilty. The article below, from Publisher’s Weekly (click on it), gives the details. 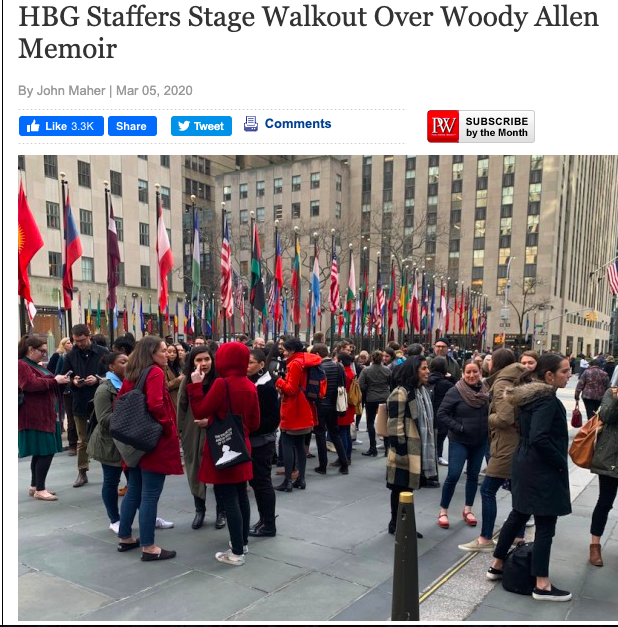 Apparently the protestors demanded that Hachette not only cancel the book, but that Hachette’s CEO Michael Pietsch apologize.  Pietsch stood by the publishing group’s decision, saying “there’s a large audience that wants to hear the story of Woody Allen’s life as told by Woody Allen himself. That’s what they’ve [Grand Central Publishing] chosen to publish.”

But never underestimate the power of the mob.

Yes, the book was canceled by Hachette the day after the walkout. Here’s the announcement.

Two accounts of the debacle are given below, from the NYT and from wfuv.org.  Pietsch attempted to hold a town hall meeting with his employees, but they walked out. At that point they gave in to the mob and canceled the memoirs. 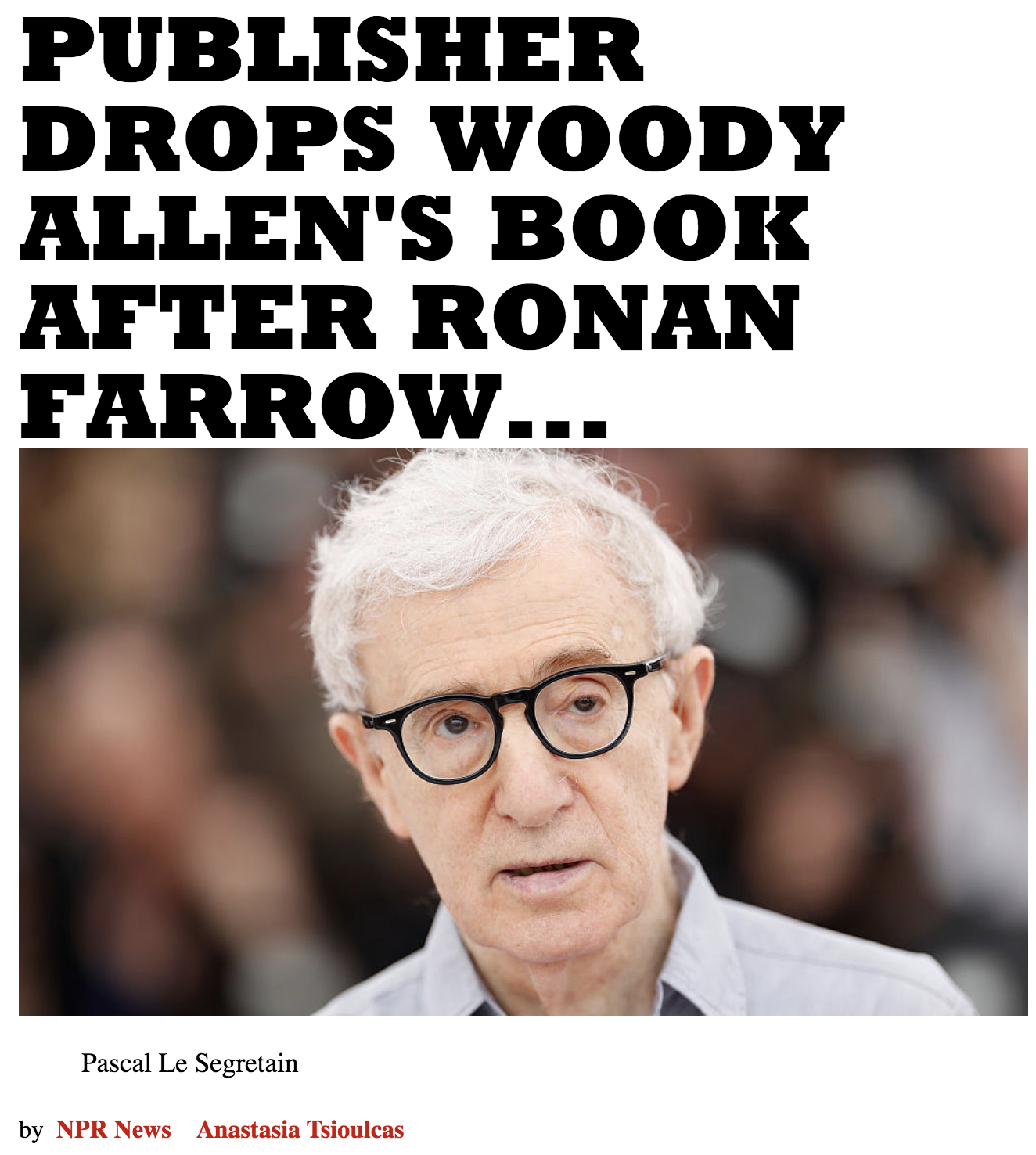 This is a reprehensible act of cowardice by Hachette. It conflates accusations with guilt itself, and if you’re going to go that route, then look at all the publishers who have published Hitler’s Mein Kampf without protest (Houghton Mifflin) and books by Henry Kissinger without protest (various publishers). If Allen had been convicted, that would be another matter, but there’s no convincing evidence of his guilt and I, for one, would have wanted to read what he had to say. Now that likely won’t happen.

Beyond the sheer craziness of the mob in this case, unable to distinguish an accusation (and only one accusation) from a conviction, ask yourself What has been accomplished by these protests and by the book’s cancelation? Do the protestors think that canceling the book will deter sexual predators? That’s about as ridiculous a notion as I can imagine. All they’ve accomplished is kept Woody Allen’s voice—and I don’t know if he was even going to discuss the accusations—from being heard.  This kind of response simply silences those whom the protestors don’t like, and gives them an excuse to flaunt their virtue.  I suppose you could say that it keeps Woody Allen from profiting from his writings, but Allen doesn’t need the money and, remember, there is no credible evidence that he’s a criminal.

Somehow we’ve got to stop people from taking single accusations as firm evidence of guilt, and punishing the accused without any legal or civil convictions. This kind of stuff is plaguing colleges and universities all over the U.S., as colleges and universities get sued because they didn’t give the accused in sexual misconduct cases a fair hearing. In other words, adhering to Title IX procedures, they equated a claim with an act.

I have no hopes, given today’s climate of easy outrage, that people will stop conflating accusations with convictions in court.