Education should not be intended to make people comfortable; it is meant to make them think.

Ben Schwarz is a well known editor and writer who was national editor of The Atlantic for 13 years after 2000, and won plaudits for his work, described in this bit from Wikipedia:

Schwarz was the literary and the national editor of The Atlantic from 2000 to 2013. In addition to writing, assigning, and editing prominent feature articles for the magazine, Schwarz ran, and wrote a regular column for, the Atlantic’s cultural and literary department, which under his editorship expanded its coverage to include popular culture and manners and mores, as well as books and ideas. The Los Angeles Times wrote that Schwarz had “reshaped the venerable magazine’s book section into the shrewdest, best-written and most surprising cultural report currently on offer between slick covers.” The writers he recruited to the Books section included Perry Anderson, Caitlin Flanagan, Sandra Tsing Loh, Christopher Hitchens, Cristina Nehring, Joseph O’Neill, Terry Castle, Clive James, and B. R. Myers.

Schwarz describes himself as politically heterodox, and is currently working on a biography of Winston Churchill.  I became acquainted with him when he wrote me with concerns about his son, who’s due to attend the University of Chicago this fall, and was planning on majoring in English. (His son describes himself as being on the political Left.) That is, until Schwarz fils saw the statement below on the U of C’s Department of English Language and Literature website (henceforth the “English Department”). 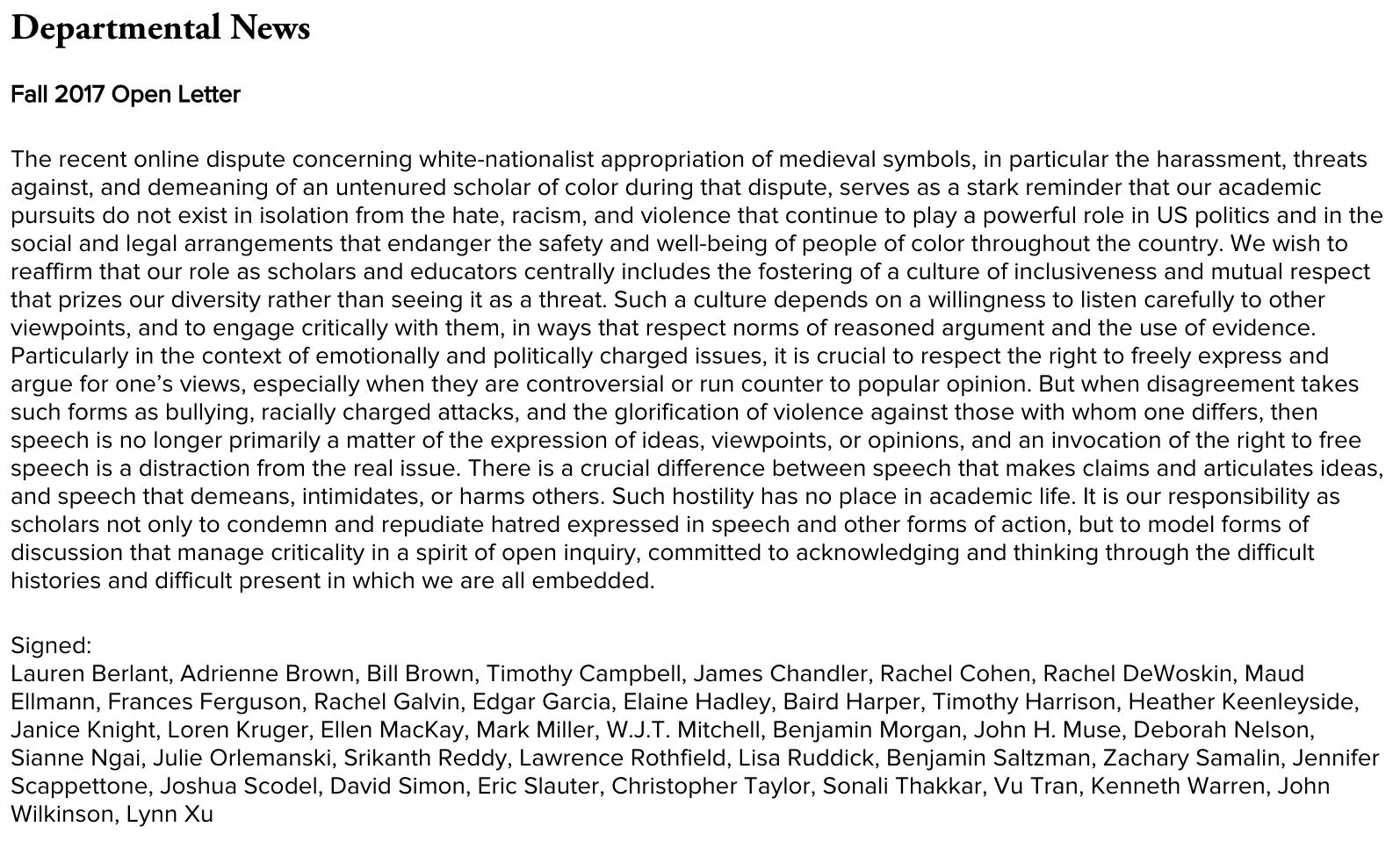 Now this is an “open letter” giving the opinion of 40 members of the department (a big majority of the faculty of 61), but, emblazoned on the departmental website, it has the cachet of being a kind of official statement. And it’s an opinion directly at odds with the Chicago Principles of Free Expression, which allow no exceptions to free speech except for the normal legal ones as well as speech that may disrupt the workings of the university:

The freedom to debate and discuss the merits of competing ideas does not, of course, mean that individuals may say whatever they wish, wherever they wish.The University may restrict expression that violates the law, that falsely defames a specific individual, that constitutes a genuine threat or harassment, that unjustifiably invades substantial privacy or confidentiality interests, or that is otherwise directly incompatible with the functioning of the University.In addition, the University may reasonably regulate the time, place, and manner of expression to ensure that it does not disrupt the ordinary activities of the University. But these are narrow exceptions to the general principle of freedom of expression, and it is vitally important that these exceptions never be used in a manner that is inconsistent with the University’s commitment to a completely free and open discussion of ideas.

There is no—repeat, no—exception for the so-called “hate speech” here, or for speech that involves bullying, racially charged attacks, nor for speech that “demeans, intimidates, or harms others.” We’ve discussed this many times, and I’ve given lots of examples (as does Schwarz in the article below) of how speech that articulates useful and discussable ideas can at the same time be claimed to “harm, demean, or intimidate others.”

Ben wrote me about his concerns. I read the statement and agreed with him that the English Department statement is directly at odds with the University’s own position.  While one could say that the English Department statement is just an expression of personal opinion and not official policy—which is true—it should not be a permanent fixture on a department website, because it’s intimidating and gives the impression that the English Department has values inimical to those of the University as a whole. In fact, when Ben’s son read that statement, he decided that while he’ll still come here next fall, he’s not going to major in English Language and Literature. So they’ve lost a student. The 40 woke professors should have just written a letter to the  student newspaper rather than having their views given permanence on their departmental website.

But then Schwarz père decided he’d confect a critical analysis of the statement above, taking it apart and showing how it contradicts the principles of our University. And so he wrote the article below in Spiked, which I recommend you read in its entirety. It’s not pleasant for me to see the University of Chicago, of which I’m proud, criticized in this way, but I have to say that it’s necessary. As our school becomes more woke, it’s essential that U of Cers like me stand up for the Chicago Principles to keep other departments from loosening the reins on free speech. (The administration still stands by the principles, thank Ceiling Cat.) 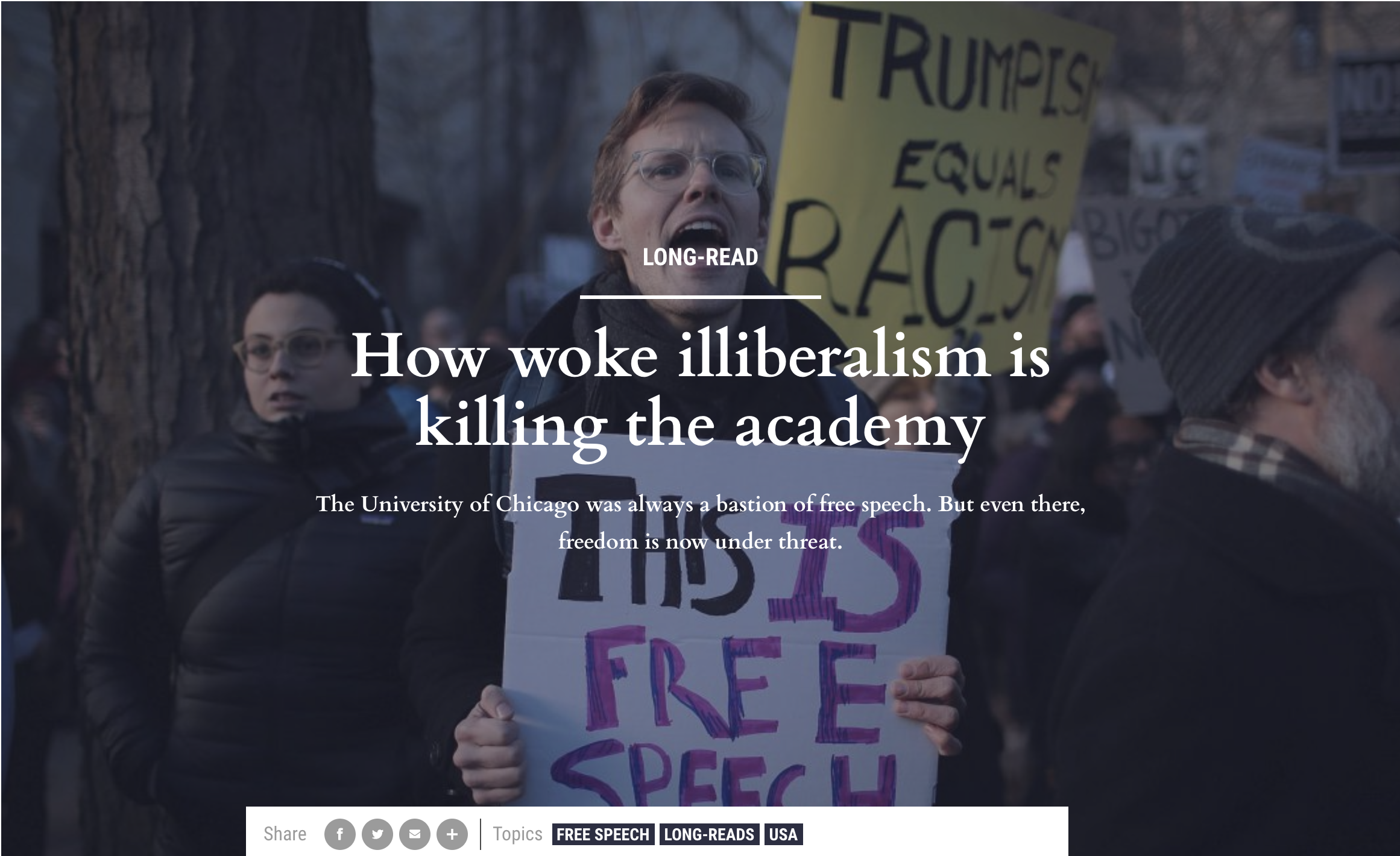 I’ll give a few quotes from Schwarz, but the four-page article (as I printed it out in 9-point type) needs a full reading. As one would expect from Schwarz, it’s hard-hitting and very well written. Some excerpts (indented):

Although the US News and World Report rankings (America’s most famous academic league table) place the University of Chicago’s English department as the best in the US, the department’s arguments and assertions evince sloppy writing and thinking. Who is to decide what constitutes ‘bullying’ or ‘racially charged attacks’? Who determines if and how speech ‘demeans, intimidates, or harms others’? Who deems what speech ‘has no place in academic life’? Would any individual who feels demeaned or harmed by speech have the power to exclude that speech from ‘academic life’? Is the English department proposing itself as the star chamber? The open letter states that ‘bullying’ and ‘racially charged attacks’ are just some of the ‘forms’ of ‘disagreement’ that are illegitimate and therefore deserving of expulsion from the academy (‘when disagreement takes such forms as…’, emphasis added). Who will decide what other ‘forms’ of ‘disagreement’ are considered worthy of banishment from campus? The department states that ‘the invocation of the right of free speech’ is illegitimate when ‘speech is no longer primarily a matter of the expression of ideas, viewpoints, or opinions’ and that only speech that ‘makes claims and articulates ideas’ is legitimate. Who is to determine what speech pursues these aims and falls under these categories? If the open letter’s signatories ‘condemn’ and ‘repudiate’ certain on-campus expression or activities, what form will that condemnation and repudiation take? The Chicago Principles ‘guarantee all members of the university community the broadest possible latitude’ of expression, but the English department seeks the opposite goal – not free speech, but licensed speech.

Moreover, the position articulated in the department’s proclamation is contradictory and therefore ambiguous. Speech that any person or group might construe, or misconstrue, as ‘bullying’, ‘racially charged’, ‘glorif[ying] violence’, ‘demean[ing]’, or ‘harm[ful]’ – forms of expression that the English department states should be expunged from campus – could simultaneously be ‘a matter of the expression of ideas, viewpoints, or opinions’ and constitute ‘speech that makes claims and articulates ideas’ — that is, forms of speech that the department deems permissible. Thus the position advocated in the proclamation, and any policies that might derive from that position, are irredeemably flawed. Furthermore, if the proclamation’s precepts are followed, any persons who feel that they have been ‘harm[ed]’ or ‘demeane[d]’ or that the content or manner of debate is ‘bullying’, ‘racially charged’, or ‘glori[fies]…violence’ can, in fact, ought to, shut down the offending debate or discussion. The department’s position would thus squelch free inquiry and potentially require any member of the university to be ‘condemn[ed]’ and ‘repudiate[d]’ (by the English department?) for articulating an argument because some unspecified party judges that argument to be offensive.

And the critical clash between the Chicago Principles and the English Department’s virtue-flaunting:

The English department asserts that ‘there is a crucial difference between speech that makes claims and articulates ideas, and speech that demeans, intimidates, or harms others’. But inevitably and unavoidably, expression ‘that makes claims and articulates ideas’ will be found by some – and in quite a few cases by nearly everyone – to be demeaning, hurtful and even intimidating. The Chicago Principles emphatically recognise this very point: ‘It is not the proper role of the university to attempt to shield individuals from ideas and opinions they find unwelcome, disagreeable, or even deeply offensive… [C]oncerns about civility and mutual respect can never be used as a justification for closing off discussion of ideas, however offensive or disagreeable those ideas may be to some members of our community.’ The Chicago Principles go on to declare unambiguously that ‘debate or deliberation may not be suppressed because the ideas put forth are thought by some or even by most members of the university community to be offensive, unwise, immoral, or wrong-headed’. In this way, too, the department holds a position incompatible with the principles of the university that houses and governs it.

. . . The English department affirms that all speech that can be interpreted as the ‘glorification of violence against those with whom one differs’, or as ‘hatred expressed in speech’, should be condemned and excluded from academic life. This blanket condemnation and exclusion would necessarily embrace within its ambit many important political statements and arguments. Will those who would approvingly cite the dictum ‘from the river to the sea Palestine will be free’ (a statement many believe advocates a genocidal programme against Israel’s Jews) be expelled from academic life? What about those who express Mao’s idea that ‘political power grows out of the barrel of a gun’? And what about those who invoke Thomas Jefferson’s idea that ‘the tree of liberty must be refreshed… with the blood of patriots and tyrants’?

Schwarz provides several other famous quotes that presumably would be criticized or deemed “hate speech” by the English Department, and he also discusses whether it’s exculpatory to have a simple “opinion” affixed to the website of the English Department (he and I say “NO!”). He also discusses the petition of many faculty and students calling to have Steve Bannon, invited to speak here in the fall of 2018, disinvited. (I wrote an op-ed in the Chicago Tribune defending Bannon’s right to speak.)

Yes, the administration is still holding the line on free speech here, and for that I’m grateful. But many of the Woke are edging their toes closer to that line, and there are palpable signs that my University is weakening on its free-speech commitment in several areas. (I think we, of all Universities, need to educate incoming students about free speech.) I’ve already called the English Department statement to the University administration’s attention (as has Schwarz), yet it remains on the website. So I say to the English Department, its faculty, and all its students, “English Department: Tear down that statement!”  If you must, send it to the Chicago Maroon, but don’t leave it as a permanent part of the Department website. It creates a chilling climate for students (in English, of all places!), and has already frozen out Ben’s son from that department.

And it’s directly at odds with Hannah Gray’s statement at the top of this post.