As I reported a few days ago, “according to the student newspaper The Chicago Maroon, former Presidential advisor and Breitbart editor Steve Bannon has been invited to speak here this fall, and has accepted. The person who invited him was a professor at the business school, Luigi Zingales.”

The Bannon visit, not yet scheduled, will actually be a debate, not a speech, so there’s already counter-speech in the offing. (The debate is said to be on “the economic benefits of globalization and immigration.”) Despite that, students protested outside the Booth School of Business, the student government formally objected, and 86 faculty, much to my shame, signed a petition objecting to Bannon’s invitation. (It’s telling that nearly all of the factulty signatories at the time I reported—the number has grown—were in the humanities, and none were in physics, chemistry, or biology.) This is happening at the school with perhaps the best and most liberal free speech policy in American universities (and we’re not even a public university). The faculty’s objection to Bannon, on the tiresome grounds that he purveys “hate speech” rather than “free speech”, is reprehensible.

But the objections grow. As the Chicago Maroon (the student newspaper) reports, ten students, organized by the UChicago Democrats and two students, disrupted one of Zingales’s classes (photo below):

The protest, organized by UChicago Democrats member and second-year Madeleine Johnson and another student who requested anonymity, was publicized through a private Facebook event and came on the heels of other protests and organizing on campus against the invitation.

Around 10 students sat in, mainly situated in the back of the seminar room, and held up signs with messages such as “Rigorous Inquiry ≠ Hate” and “Tell my dead ancestors that reason can defeat hate.” UCPD officers were present outside the classroom and reportedly stationed in the area surrounding the Harper Center, according to a post on the Facebook event page.

That disruption of a class shouldn’t be tolerated, though the University didn’t intervene until later (see below). I’m ashamed that even a Jewish group is on board with the disinvitation:

Some of the posters included the logo of J Street UChicago, a student group usually focused on issues of Israel and Palestine. According to second-year Ruth Landis, co-chair of the UChicago chapter of J Street, “seven J Street U board members attended the sit in…because as Jews, we feel the urgency of ridding our institutions of anti-Semitism; as progressive students, we feel the urgency of ridding our campus of hatred and bigotry in all forms.”

Here’s the Maroon‘s photo of the sit-in: 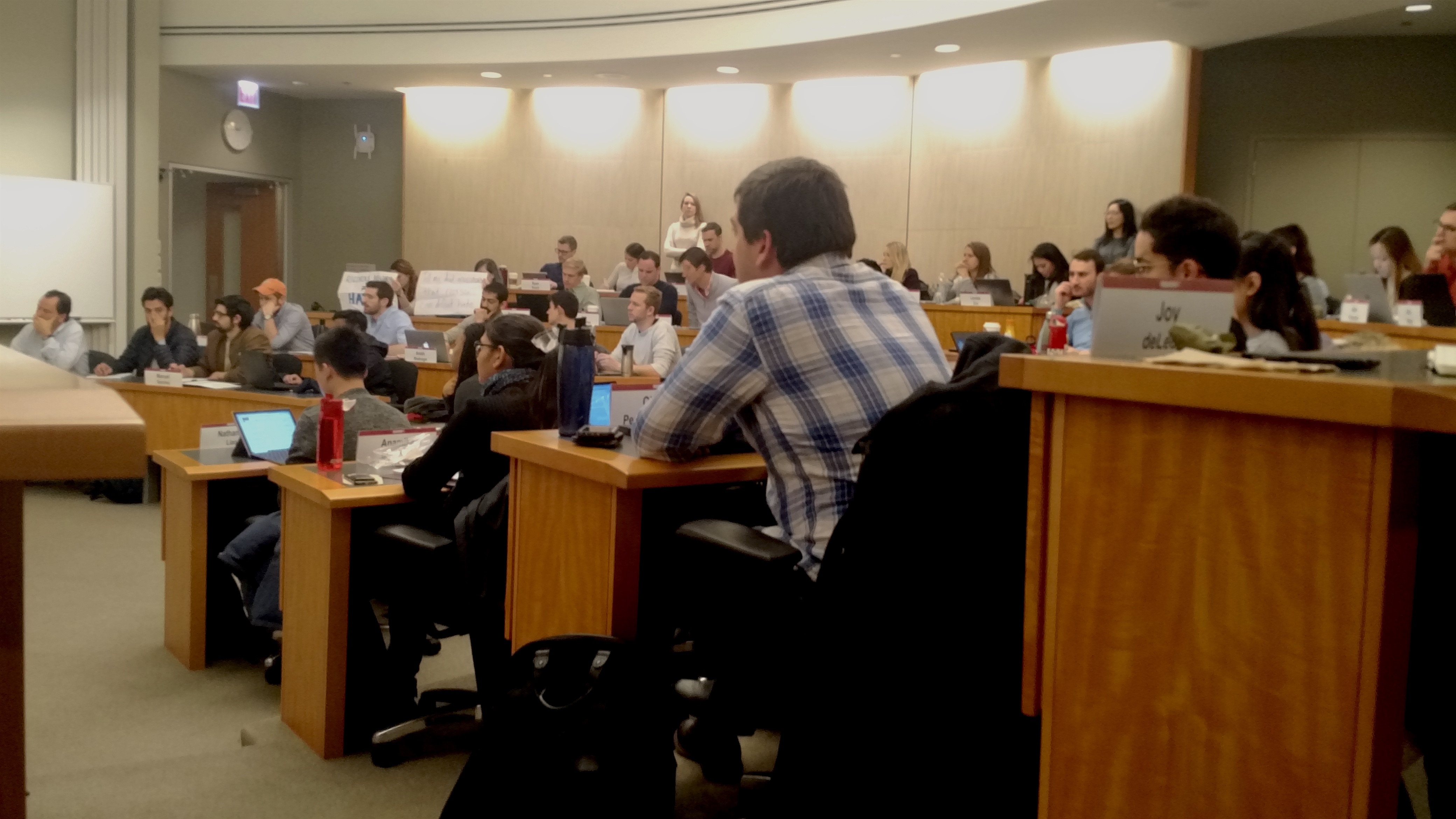 The students utterJen the usual “we love free speech, but . . .” palaver, too:

“Many undergraduate individuals feel it’s unacceptable that Bannon has been given a platform at UChicago,” said Rikki Baker-Keusch, A.B. ’17, who is currently in the A.M. program at the Center for Middle Eastern Studies, and was one of those escorted out of Booth. “We understand the importance of free speech, but this is a private platform and [Bannon] has incited violence against many, and we could not stay quiet.”

Baker-Keusch doesn’t understand the free-speech meaning of “incitement” (it means an immediate, on the spot call for violence that leads to violence), and I doubt whether Bannon has ever called for violence against groups in the U.S. At any rate, Zingales has agreed to have a town hall meeting with the students (good luck to him, and I hope he wears Kevlar!), and his conciliatory demeanor has quashed further demonstrations in his classes. Further, the University police escorted the protestors (some of whom walked out of class) outside the building, as protests aren’t allowed inside. The administration is starting to enforce the “no disruption” policy, and enforcement is the only thing that will stop the disruption of classes and invited speakers.

As the Maroon reports in another story, various campus groups are planning protests when Bannon arrives, and one professor urged nonviolence. Such meetings are fine, so long as they don’t intend to disrupt or cancel the debate, but again we have faculty displaying arrant ignorance about freedom of speech:

Tyler Williams, an assistant professor of South Asian Languages and Civilizations who spoke during the forum and also signed the faculty’s open letter to University administration opposing Bannon’s invitation, suggested that activists should host their own lectures and panels before Bannon’s visit.

Williams wrote in an e-mail to The Maroon that this will allow University and community members who have been “impacted by anti-immigrant, anti-Muslim policies engineered by Bannon” to explain why “giving white nationalists like Bannon more space in institutions of learning will only further legitimize white nationalist discourse.”

“This is not an issue of freedom of speech . . . but rather an issue of the University sending a message to the public (and to its own members) that it considers such white nationalist rhetoric to be legitimate intellectual and political discourse,” Williams added.

It’s amazing to me that virtually everybody urging Bannon’s disinvitation brings up and then dismisses freedom of speech. I think they make themselves look bad by even mentioning it, for it lets us know that they’re discarding one of the fundamental principles of American democracy because they don’t like its results—results which are part of the reason the First Amendment was enacted! And of course we have the usual problem, which I’ve discussed before, of how one defines “hate speech” and who is to judge when such speech should be banned.

Finally, the Chicago Tribune reports that over 1000 former University students have written a petition to the University president urging that Bannon’s invitation be rescinded. They tried to go into the Administration building to deliver it, but were stopped by University police. An administrator took the letter and promised to give it to President Robert Zimmer and the provost.  As one expects by now, the petition (see it here) argues that Bannon’s speech isn’t “free”, but “hate”, and thus deserves no platform at the U of C:

We would not have gone to the University of Chicago had we not sought out a richly rewarding educational experience with groups of diverse people of different ideologies and mindsets. However, amplifying Bannon’s hate speech does not align with these principles, and making space for Bannon necessarily drives out space and resources for other perspectives. We concur with our faculty’s assessment that condoning a visit from Bannon compromises that mission in and of itself. We do not question Bannon’s right to speak. We gravely question the University’s decision to give him a platform to do so.

And then they urge denying him that platform (and what does rescinding an invitation say except that Bannon has no right to speak?):

The Committee on Free Expression concluded, “[to] this end, the University has a solemn responsibility not only to promote a lively and fearless freedom of debate and deliberation, but also to protect that freedom when others attempt to restrict it.” Stephen Bannon seeks to silence dissenting voices of large portions of society. Denying him a platform to speak at our university does not restrict our environment of fearless freedom of debate and deliberation; rather, it protects that environment.

As I’ve said before, I don’t think Bannon has advocated censorship, and even if he did he still should not be censored, for even those who want to suppress free speech—like the signers of this petition!—should be heard.  The double standard of “free speech but” was expressed by one of the alumni who spoke to the Tribune:

“Lately there’s been this idea that all free speech is good speech and that every side should be heard equally, but then we’re lending false equivalency to what could be very dangerous ideas,” said Marijke M. Stoll, who earned two degrees from U. of C. in 2005 and 2006. “This isn’t a matter of disagreement over economic policy. We know which side is wrong; we know which side is morally and ethically repugnant.”

“We know which side is wrong”! It’s never, of course, the speaker’s side. It is this feeling of absolute moral certainty that gives people like Ms. Stoll the arrogance to claim the right to be the censor—the decider. People like Stoll and the many others who call for disinvitation of Bannon should a.) read John Stuart Mill’s On Liberty, b.) listen to this speech by Christopher Hitchens, and c.) read these remarks made by Barack Obama at Howard University’s graduation in 2016.

Here are some of the Tribune‘s photos of the protests (all photos by Jose M. Osorio of the Chicago Tribune): 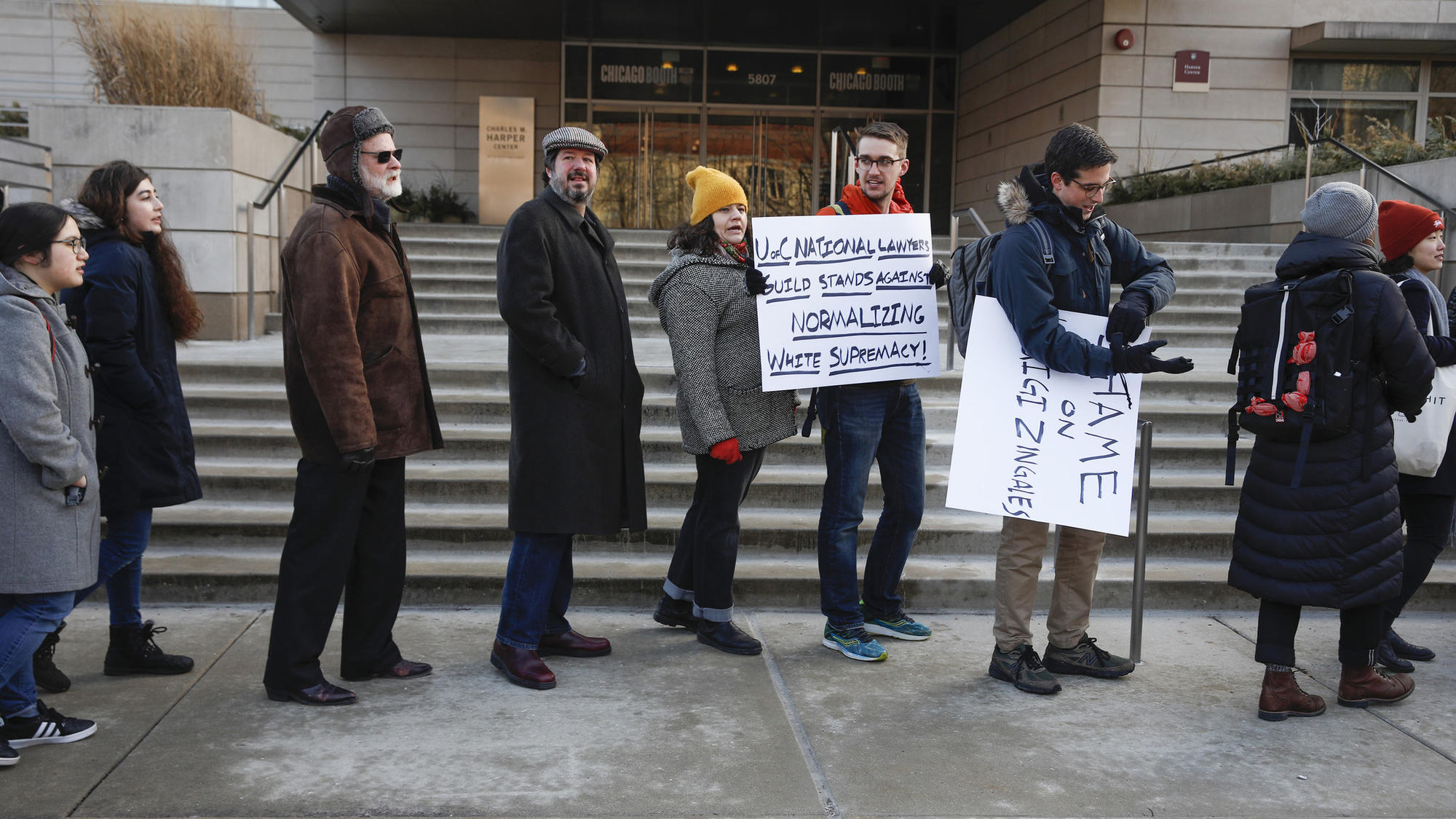 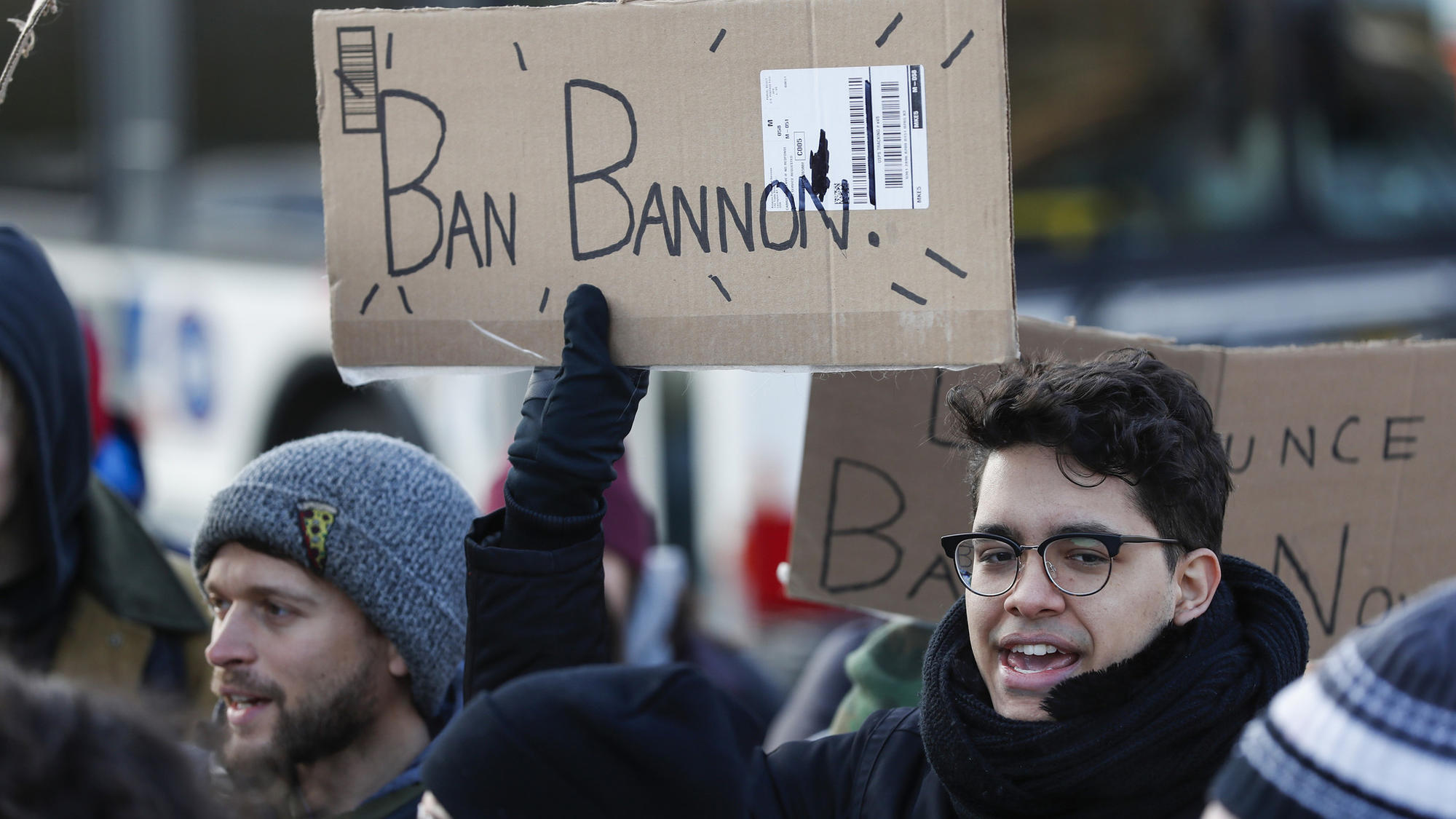 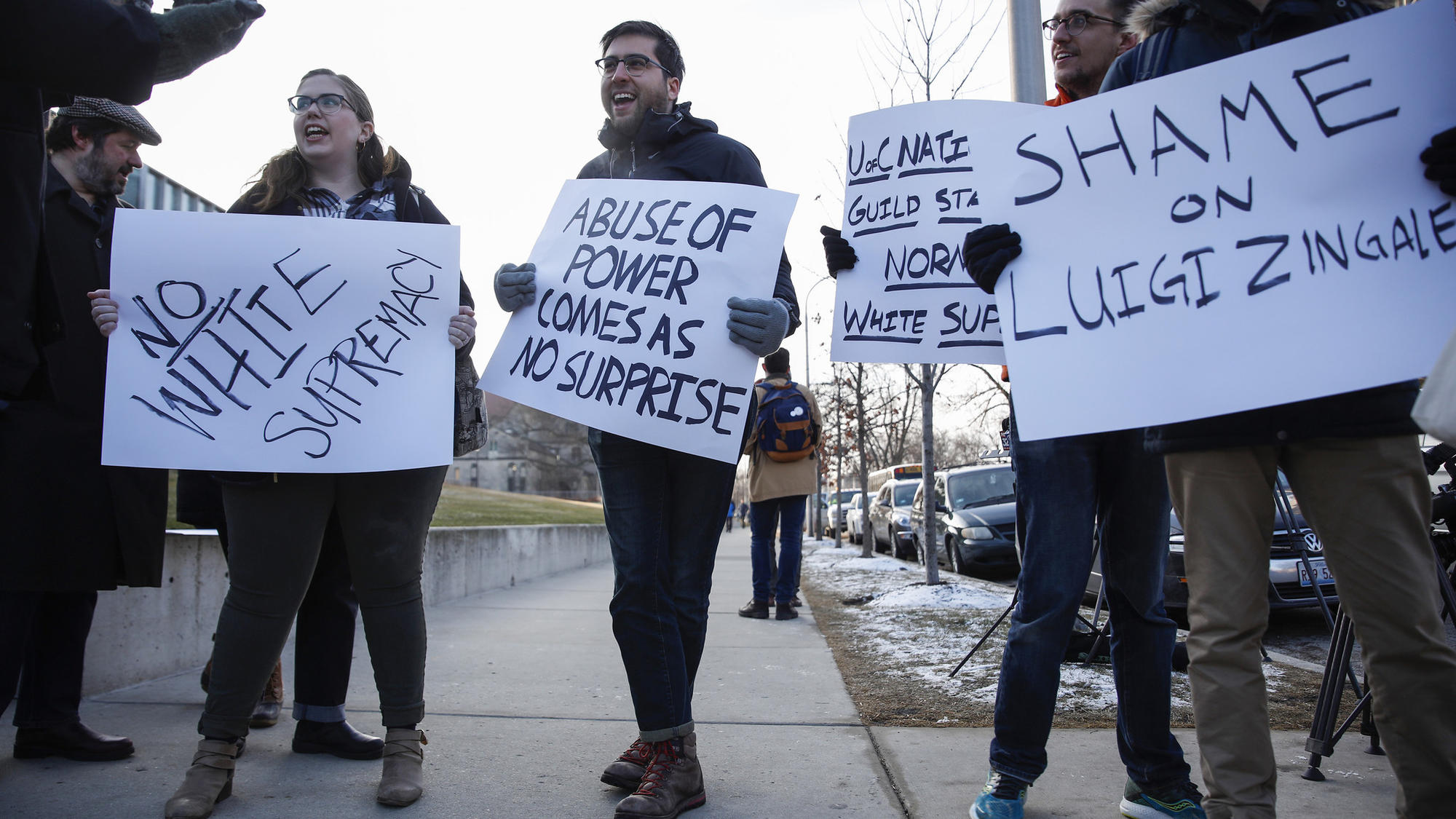 85 thoughts on “More trouble about Bannon at the University of Chicago: students have class sit-in, alumni sign petition to rescind invitation”