It’s been raining cats and dogs all day, and so there are many poodles to avoid. This mandated another indoor thing to do, which involved getting a late start and then wandering the Place Madeleine to find the Place Édouard-VII, a small square in the Ninth Arrondissement built in 1913 and named for King Edward VII, the son of Queen Victoria.

Edward was considered the most French of modern English kings, and one tourist site gives this information (probably a translation from the French):

King Edward VII, made himself the artisan of the Entente Cordiale, between France and England. Paris which he appreciated above all the spirit, gastronomy and women, paid homage to him in 1913. The young Paul Landowski wished to register here, far from the style of his Saint Geneviève or the Christ of Corcovado.  In the great tradition of the equestrian statue. The king, guiding his horse calmly, is represented in his role as chief of the armies. He carries, executed with realism, the uniform of Marshal who befits his rank: helmet with panache, coat, jacket probably red barred with a scarf and adorned with decorations, white panties and boots of rider. The choice of this classical iconography also echoes the portraits commissioned by the Sovereign in his own country. It is that it is indeed an official portrait, to express the nobility and the power, in the center of a place strictly authorised.

At the end of the  18C, there were built  18 private hotels in the  rue Caumartin, a few steps from the Boulevard des Capucines, which was then a place of promenade established on ancient fortifications dating back to King Louis XIII. In the 19C, in the purest Haussmann tradition, this boulevard had seen the erection of monumental buildings of five floors. Finally, in 1913, Nénot, the architect of the new Sorbonne and the Palais de la League des Nations in Geneva, had pierced a street in a piecemeal gap in order to carry out an extensive urban and real estate program. A street that was to take the name of Edward VII, in homage to the King of England who had worked so much in the Franco-British rapprochement.

The statue in the square: 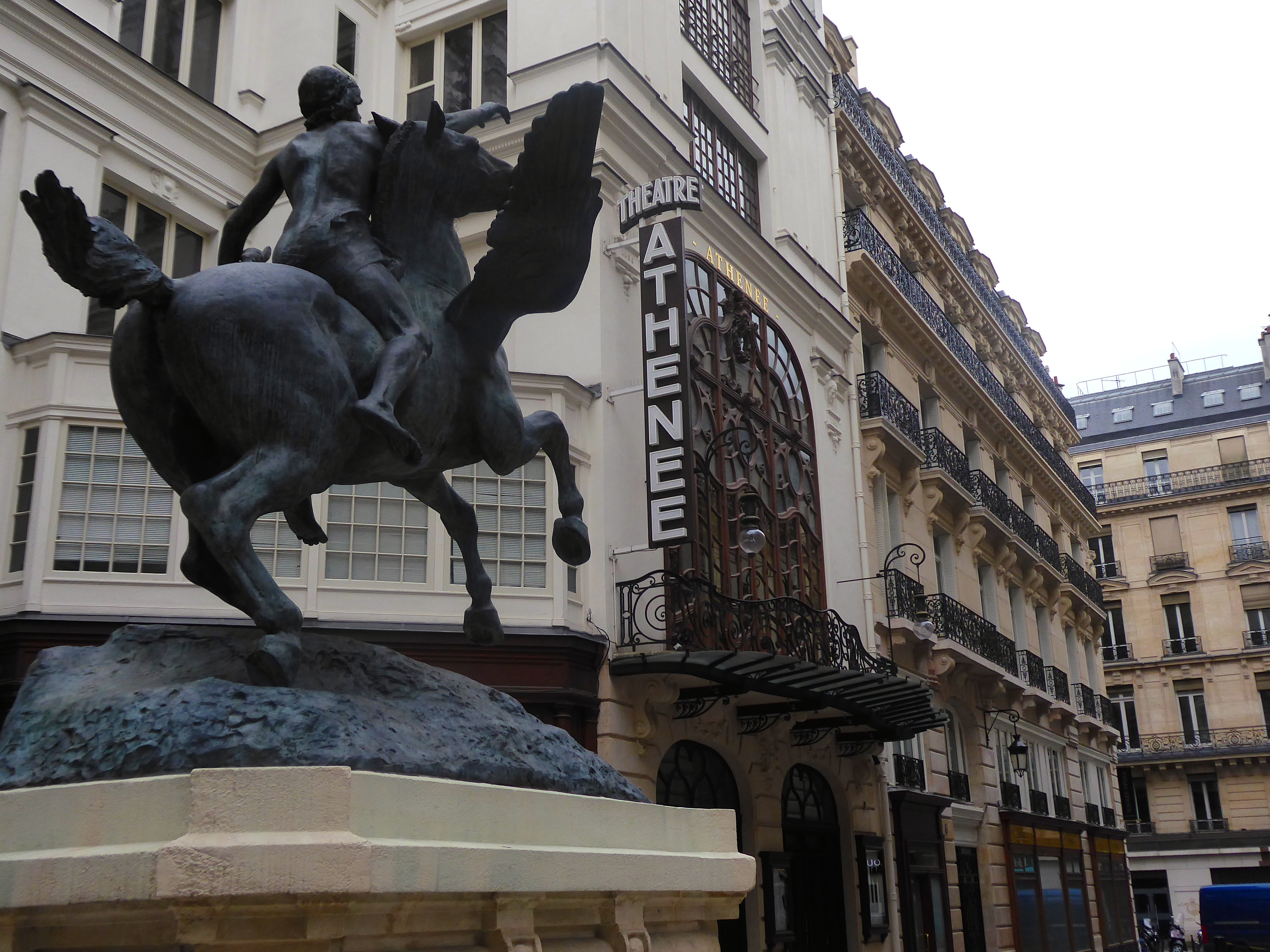 The Théâtre Édouard VII, which you can glimpse in the panorama above. The photo below is from Wikipedia, which also notes:

Important figures in the arts, cinema and theatre have performed there, including Orson Welles, Eartha Kitt, and more. Pablo Picasso created props for a play at the Théâtre Edouard VII in 1944. 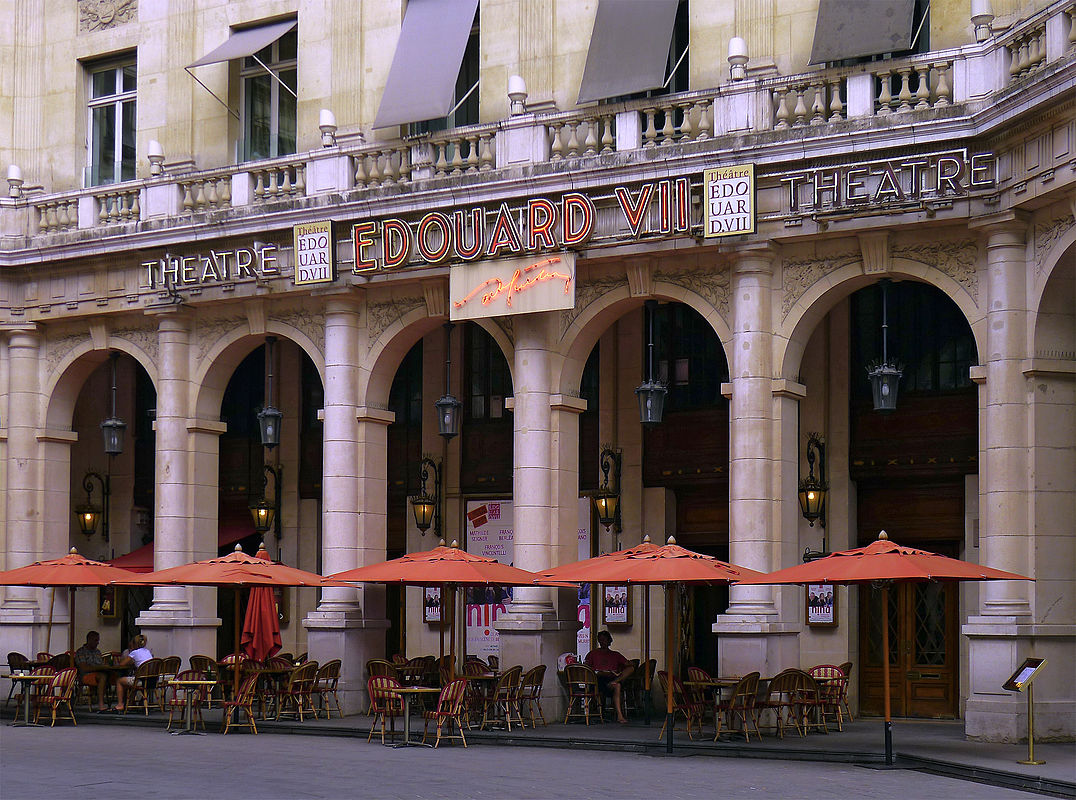 The Théâtre de l’Athénée. Converted from another building in 1894 and renovated in 1996, it saw debuts of plays by, among others, Oscar Wilde (Salomé), Jean Giraudoux, and Jean Genet. 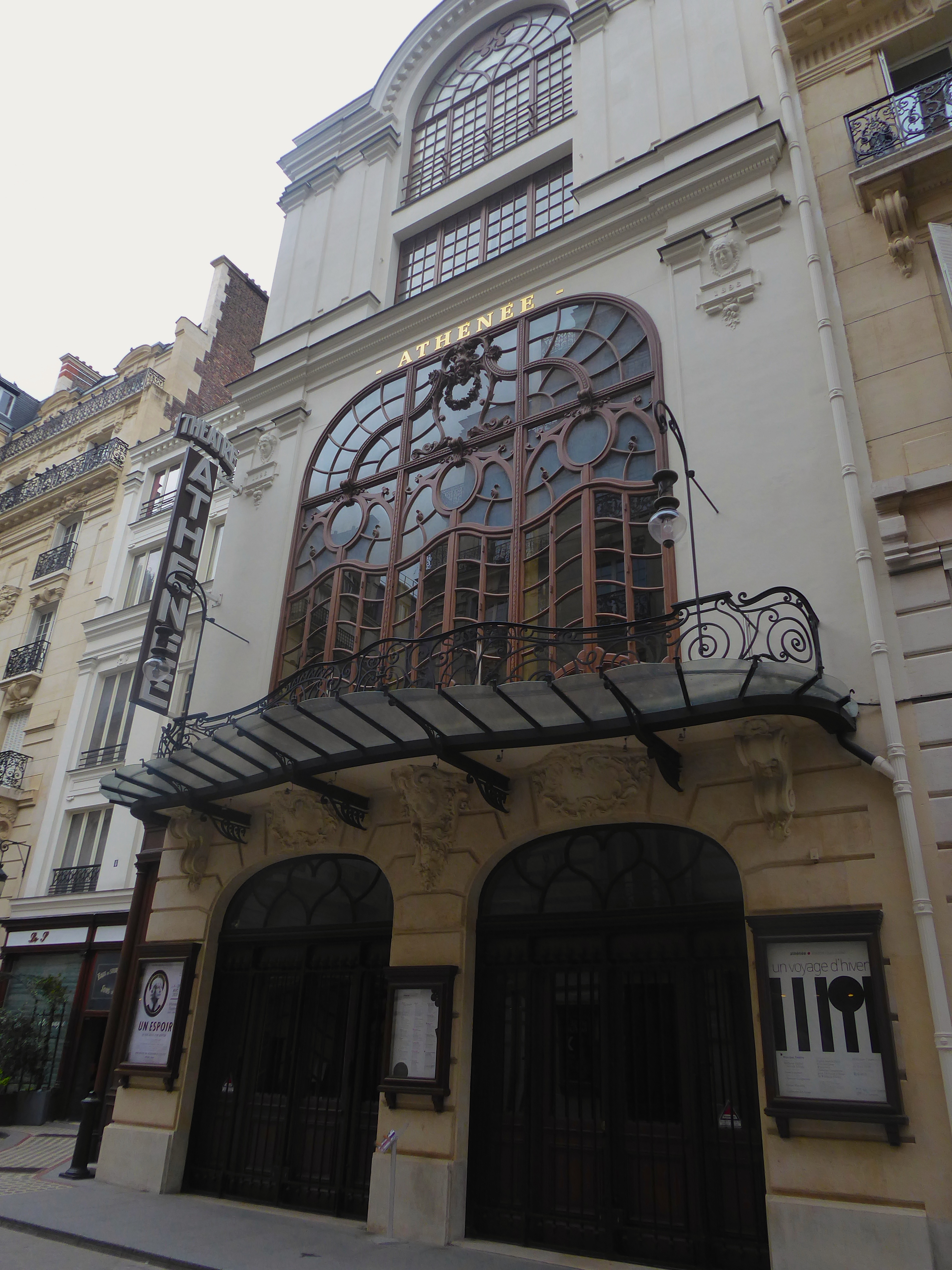 After a wander round the fancy interior of the Edward VII theater (we weren’t allowed to see the main stage and hall), we tried to visit the nearby Musée du Parfum, or Perfume Museum, run by the Fragonard Company. Unfortunately, it was closed, so we had a look at the perfume store, and I bought a few scented soaps (my one cosmetic vanity).

Perfumes and soaps (the sticks in the last row enable you to smell the scent without putting it on): 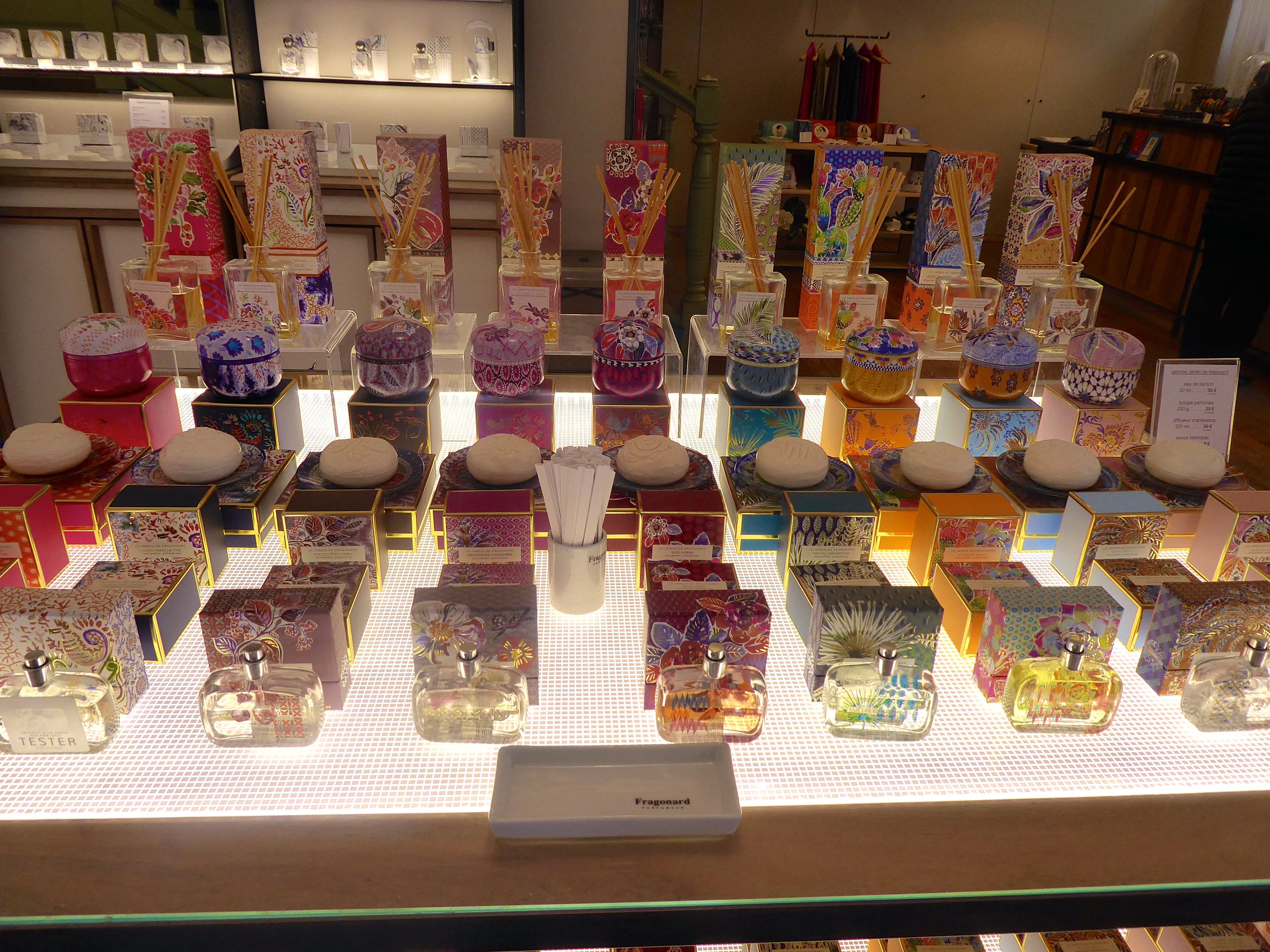 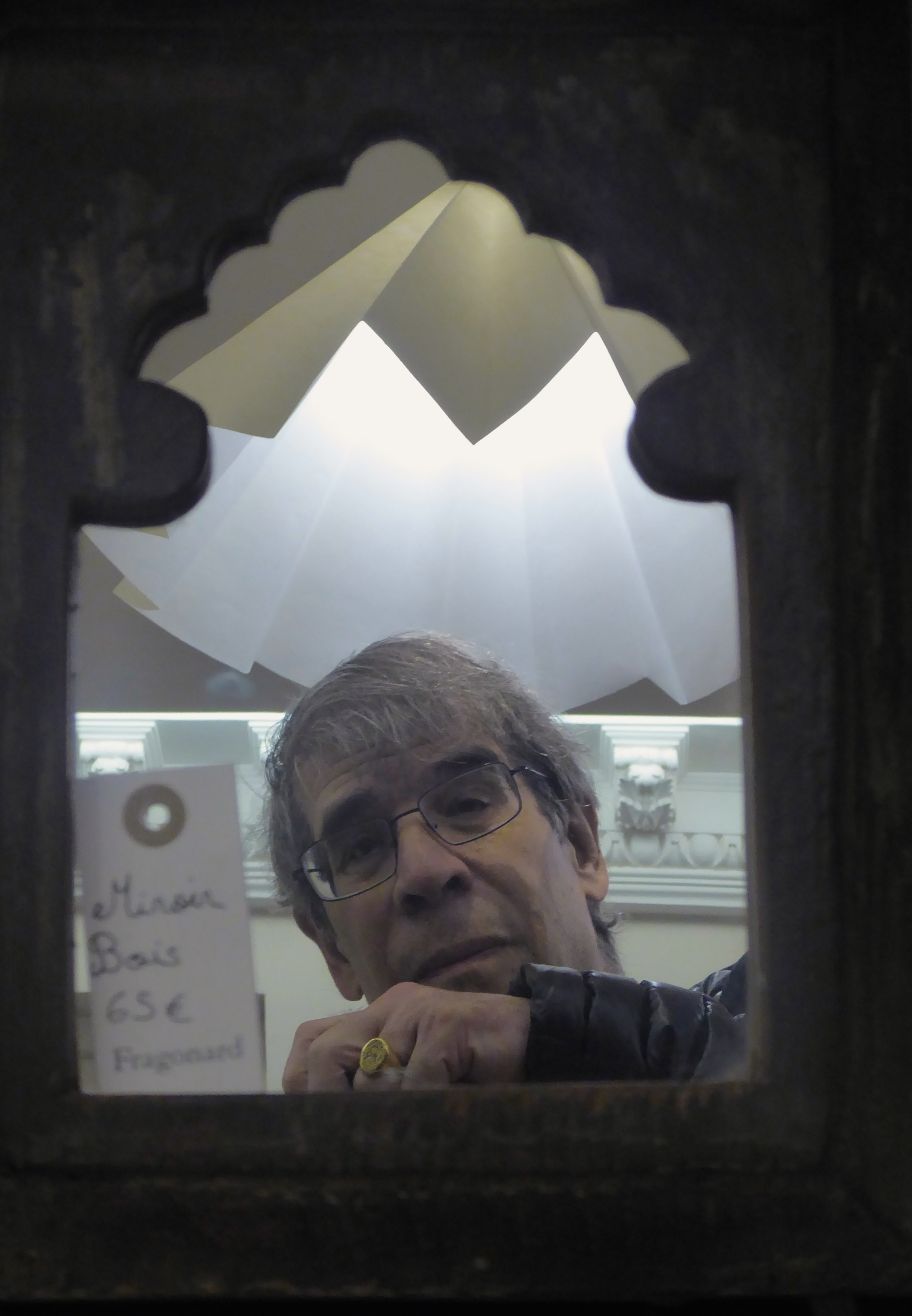 A late start, and so it was time for lunch, heading toward the Third Arrondissement from the Opera. On the way, I photographed one of the gilded figures atop the Opera: 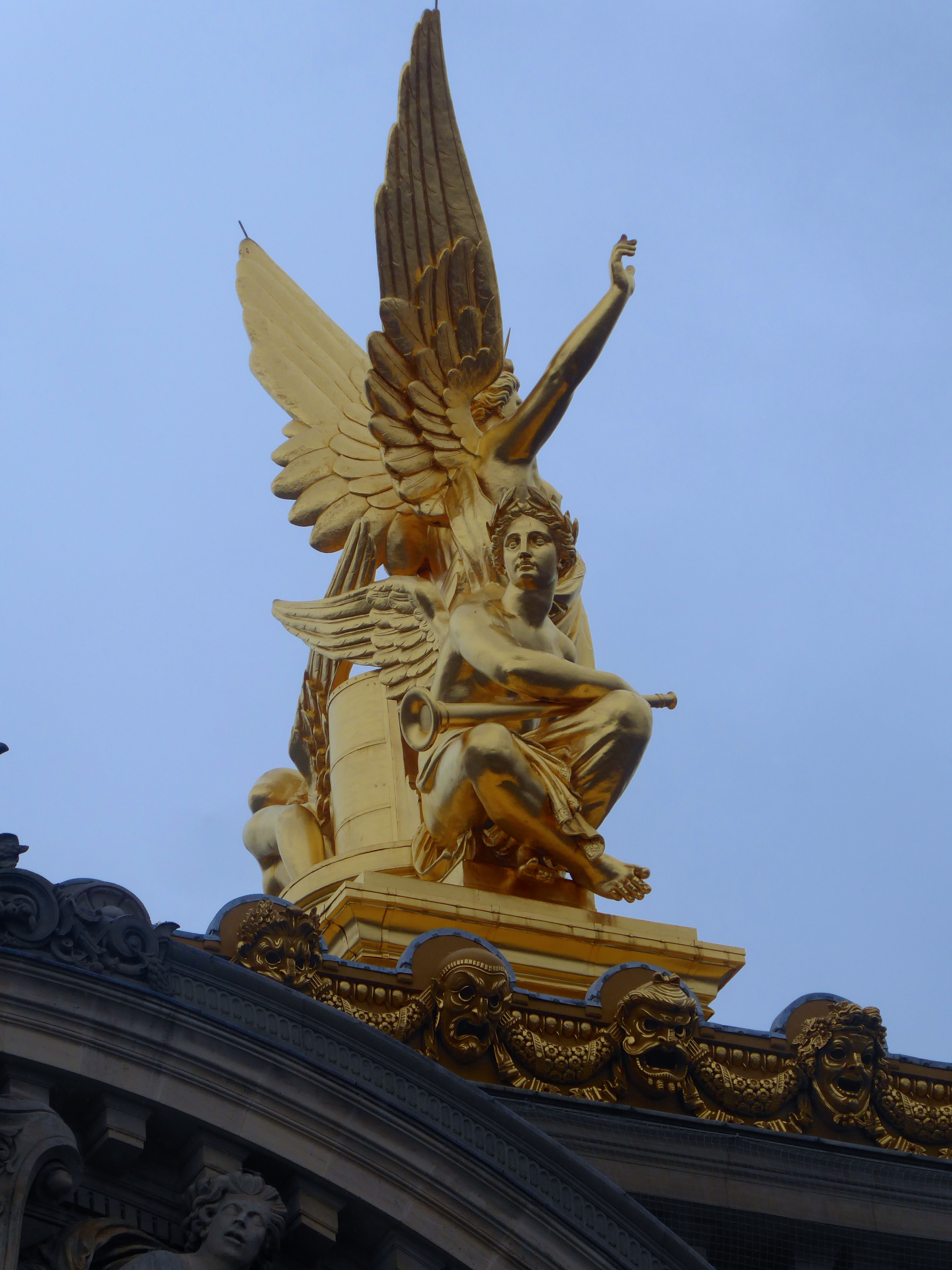 The restaurant was an old favorite of mine, the Ambassade d’Auverge, featuring the cooking of that area of south-central France. When I lived here in 1989 and was relatively impecunious, this counted as a fancy restaurant. The food has been consistently good, but there have been high and low periods. Sadly, today’s meal appeared to be at a low period. 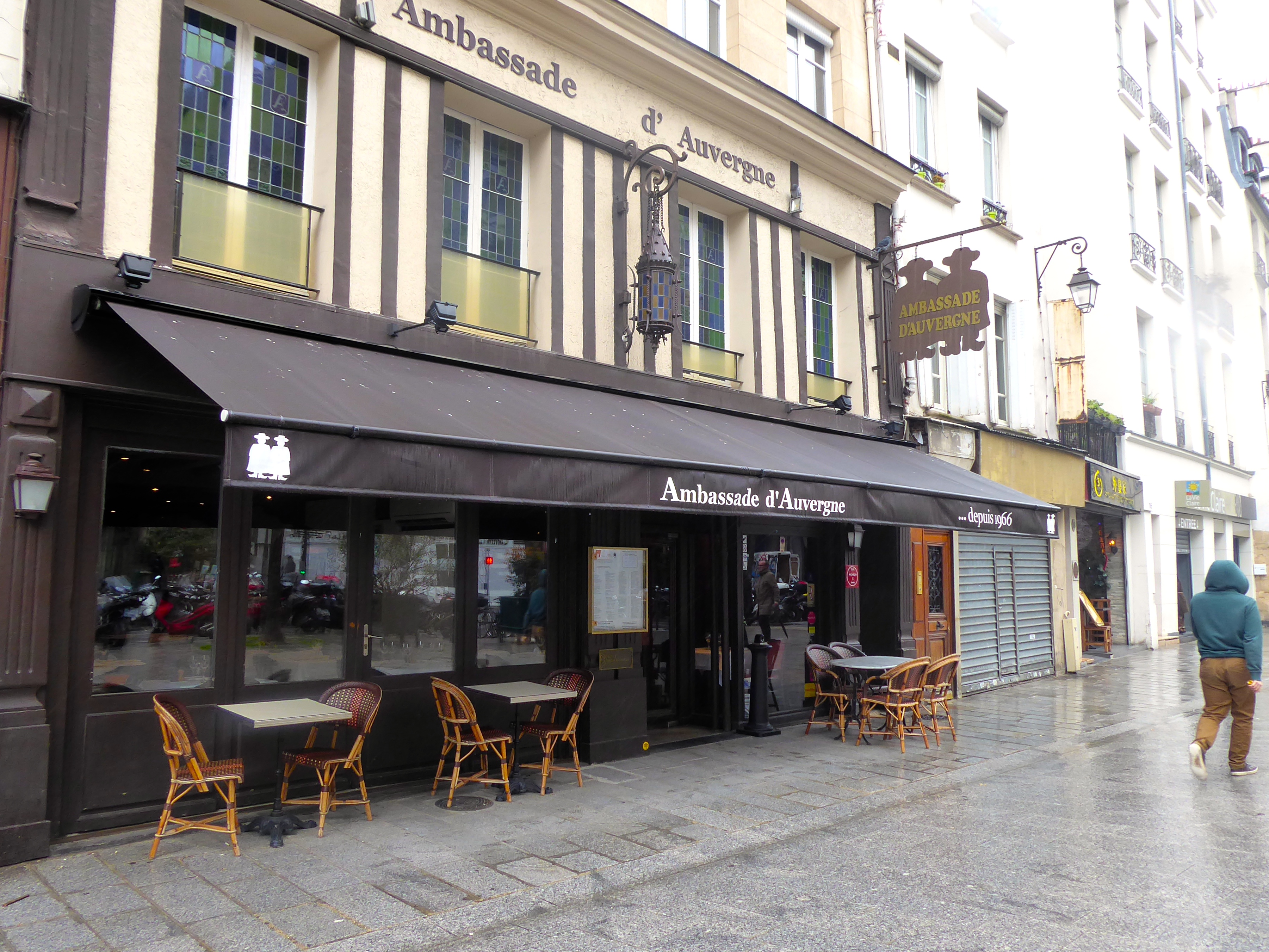 A YouTube video of the restaurant. Here you can see them making the restaurant’s speciality: aligot, a mixture of mashed potatoes and lots of cheese. It is “stretched” for the diner before it’s served, to demonstrate the high titer of cheese in the dish:

The interior. Note the d*g; canids are allowed in restaurants in France. Sometimes they’re even given food by the restaurant. 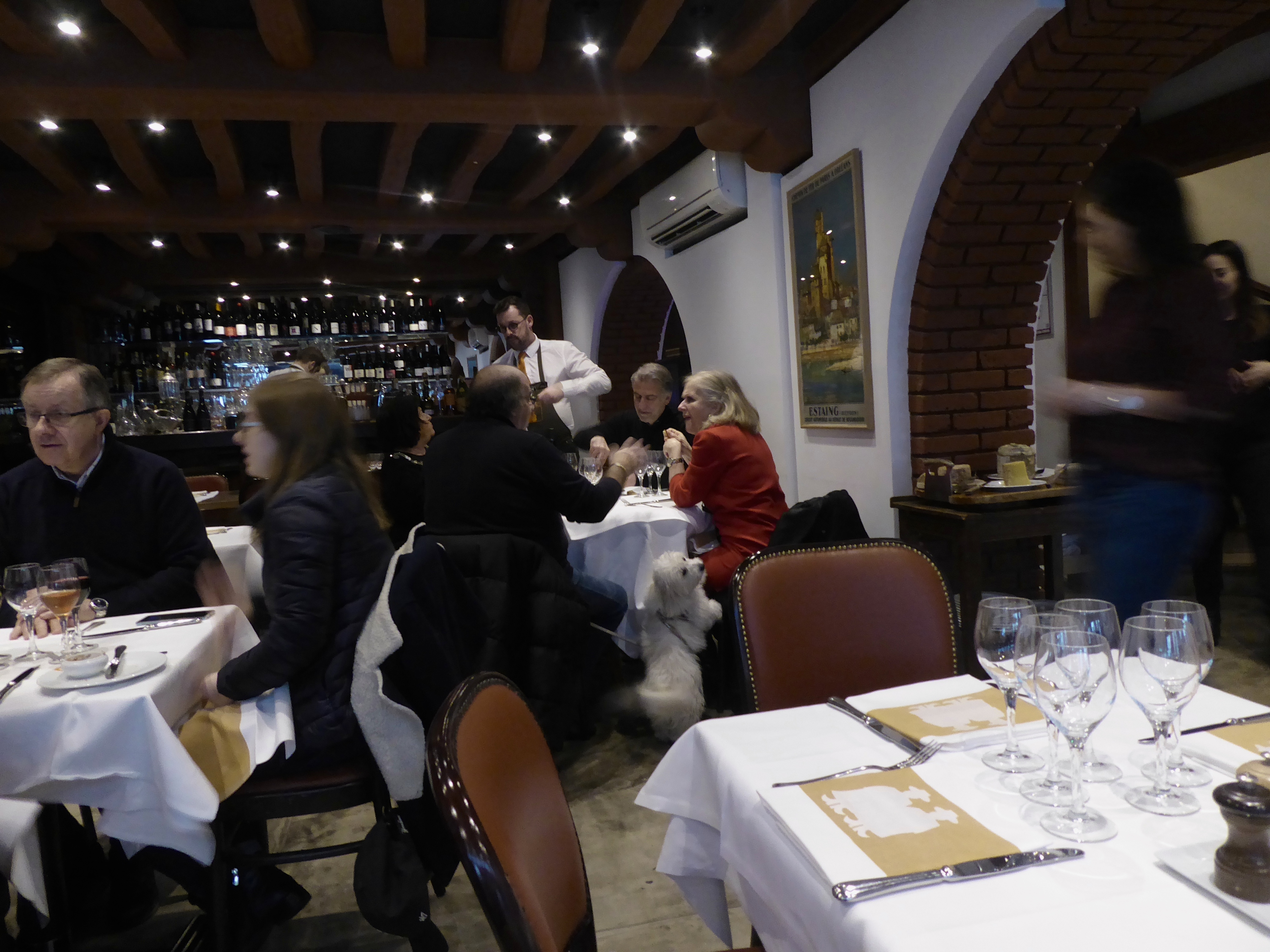 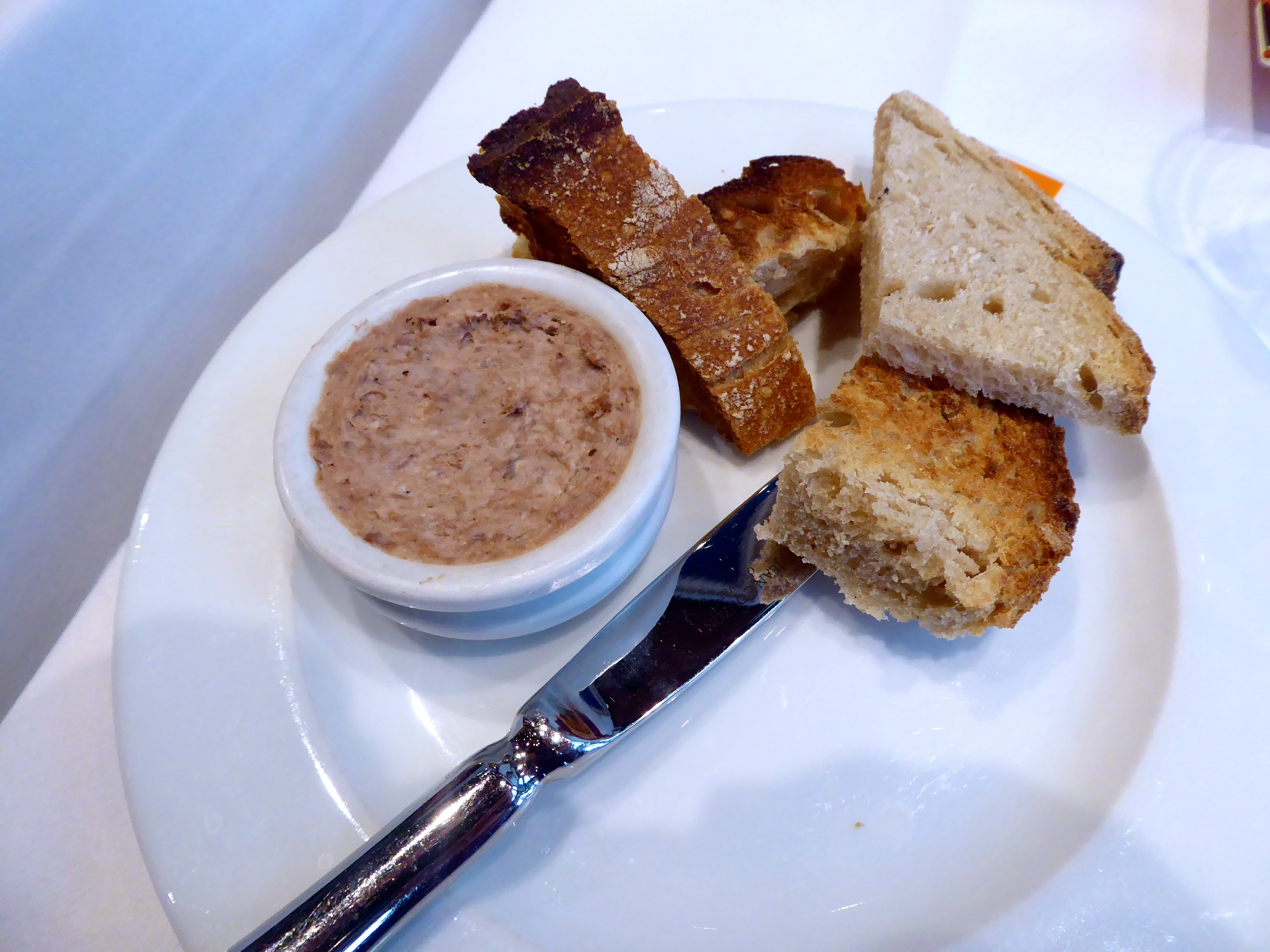 Trio of smoked fish: salmon, trout and cod. This was pronounced mediocre. 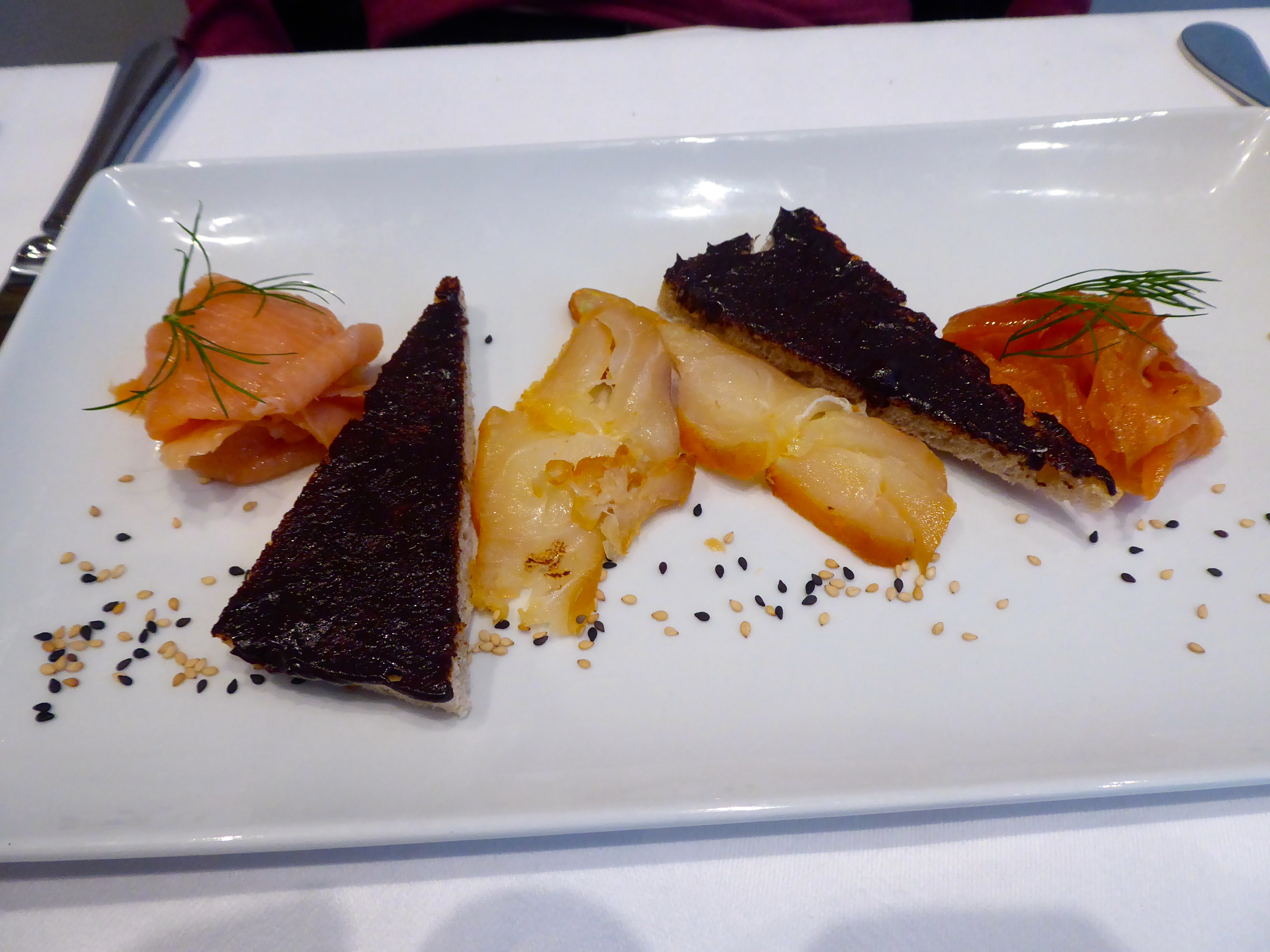 Warm lentil salad with bacon. This is always an excellent dish, made with green lentils of Puy and bacon bits, doused with a dressing made from mustard and pork fat. 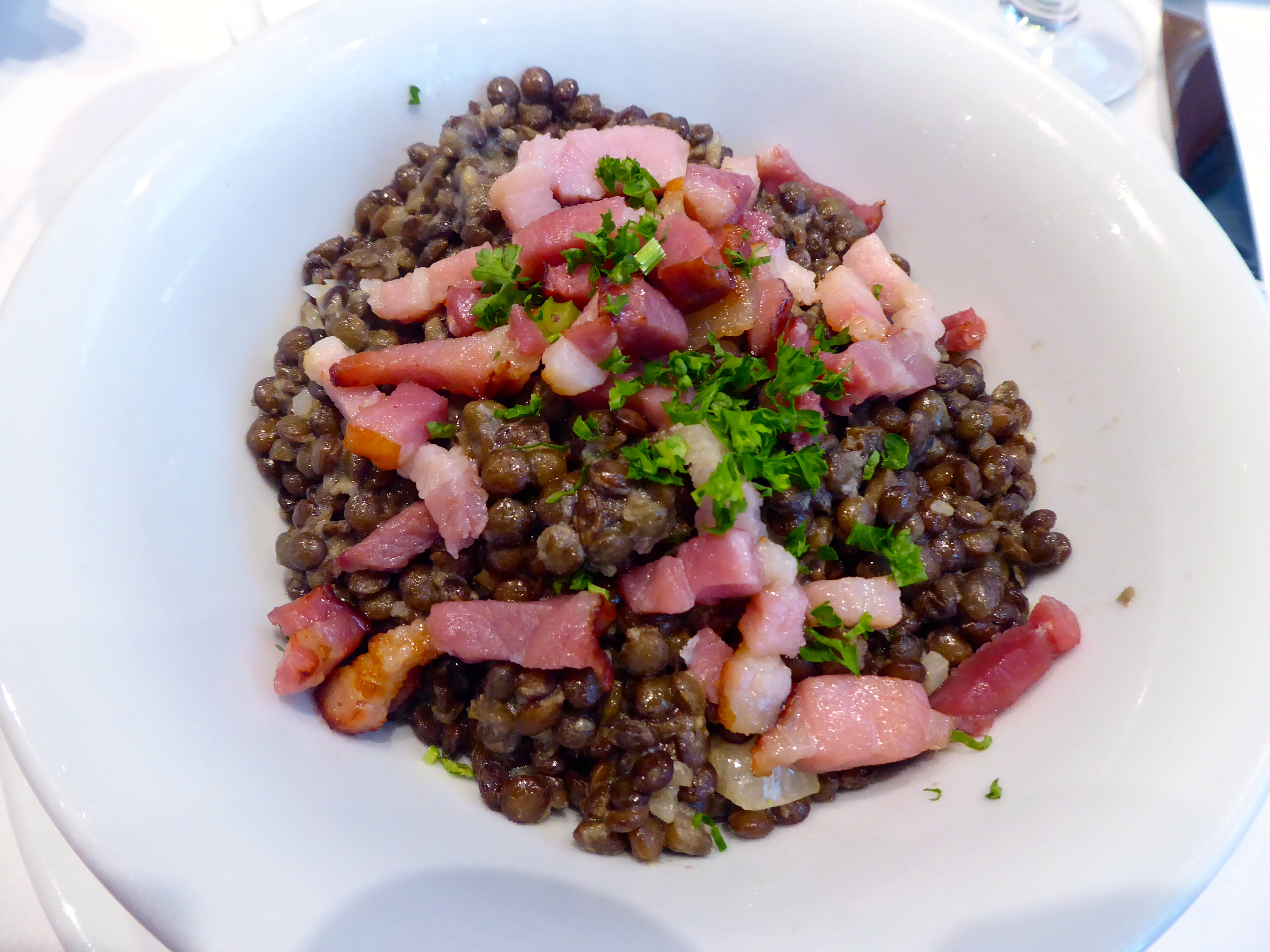 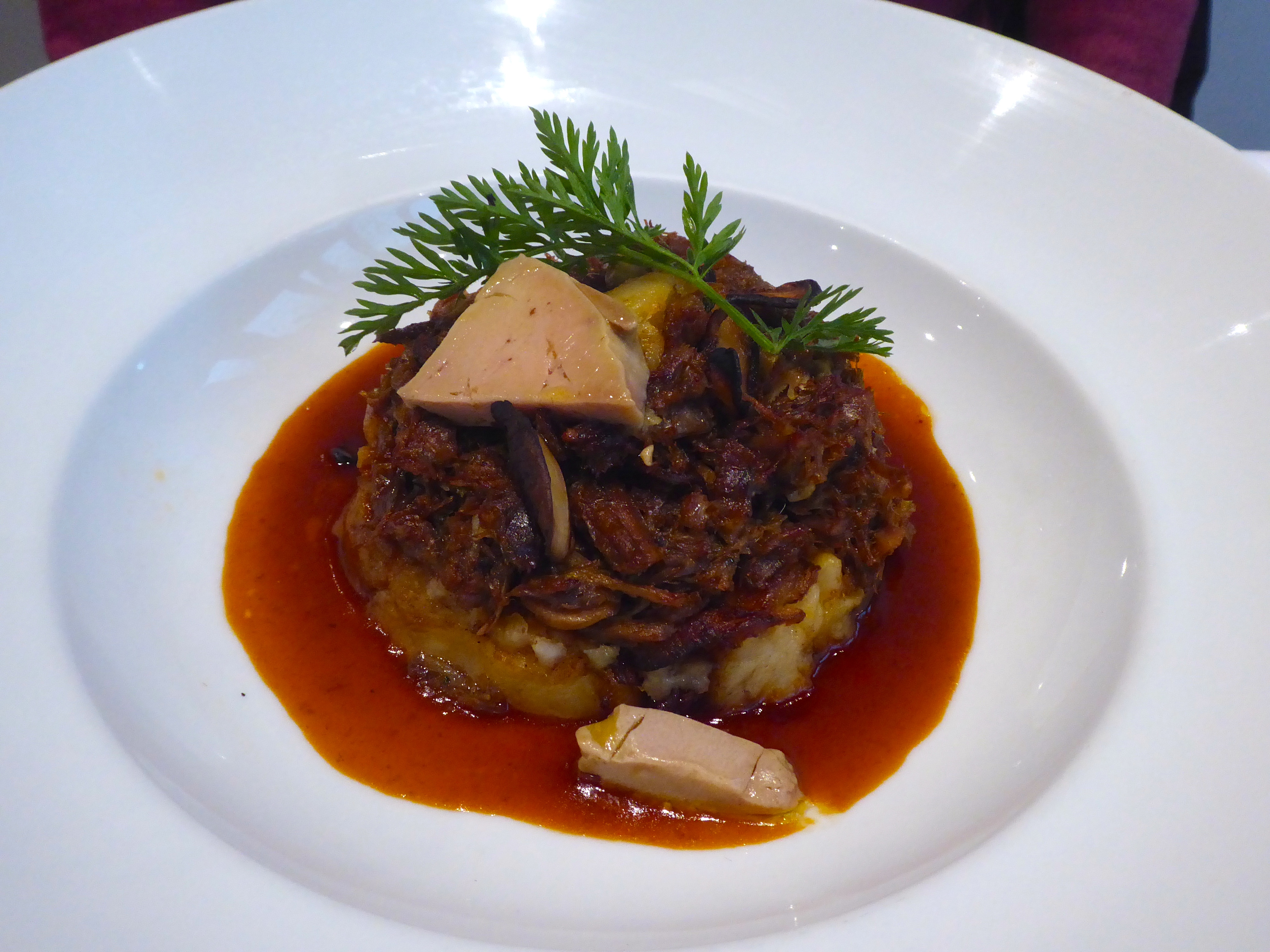 My sausage with aligot. The potatoes were very good but the sausage below par: pre-cooked and barely warmed before serving. 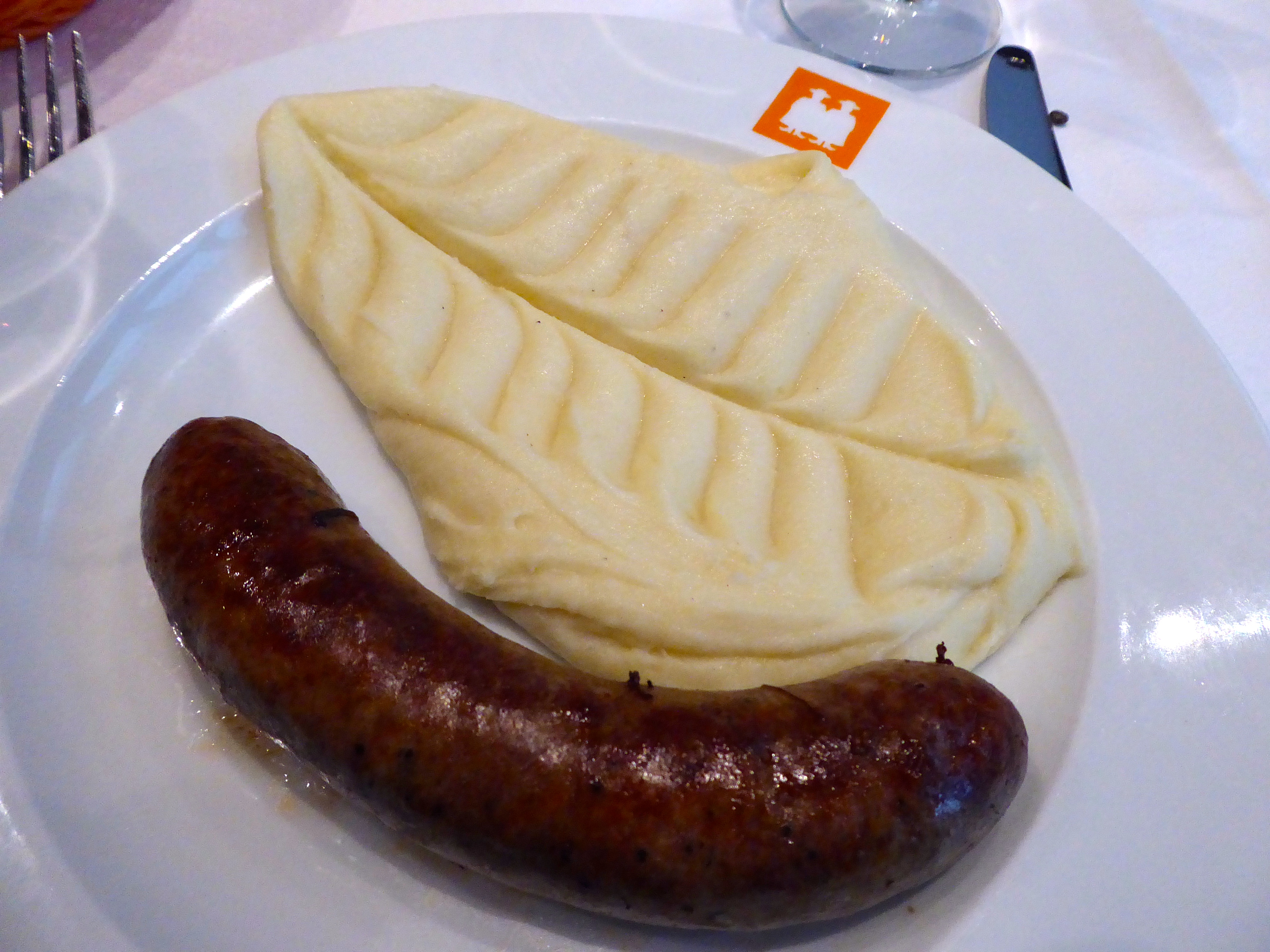 Stretching the potatoes for two tables of diners, including us:

We did not try the cheeses, but here are the four on tap, including a Bleu d’Auvergne, a Cantal, and a Fourme D’Ambert: 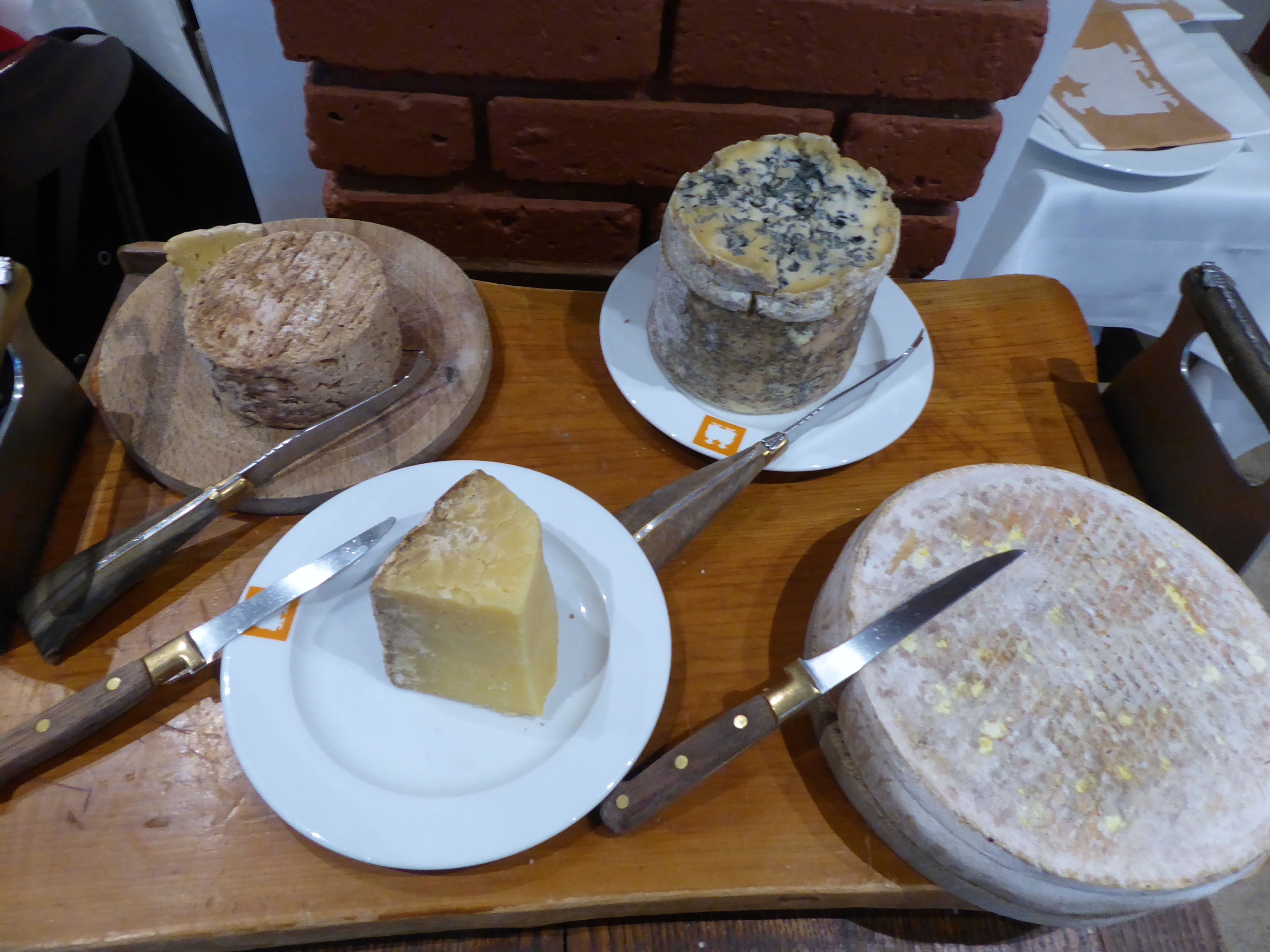 The wine, a Saint-Pourçain, had considerable floating sediment, and the carafe of water smelled faintly of fish. Given all this, we pronounced the meal a semi-disaster and decided to skip dessert, heading instead for pastries at Isabelle’s and Aux Merveilleux de Fred.

My pastries. A small kouglof from Isabelle’s: 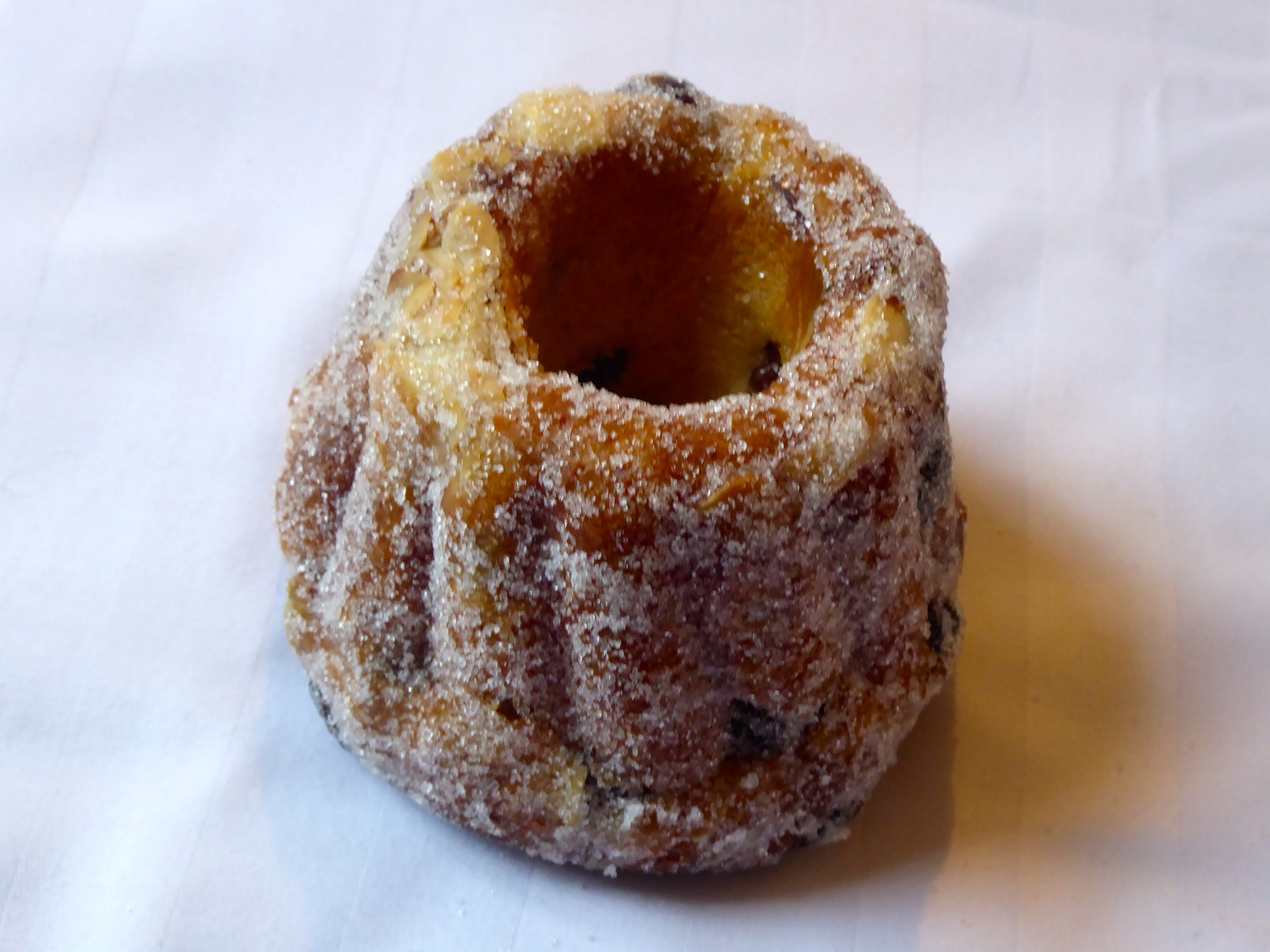 And a chocolate merveilleux from Fred’s. Both of these were fantastic, especially the merveilleux, which had two meringues sandwiched around a cream filling sitting atop a biscuit, all sprinkled with chocolate and topped with whipped cream. This was incredibly good, and I now know why the Parisian dowager I followed out of the shop the other day started eating hers on the street—something rarely seen in this city. 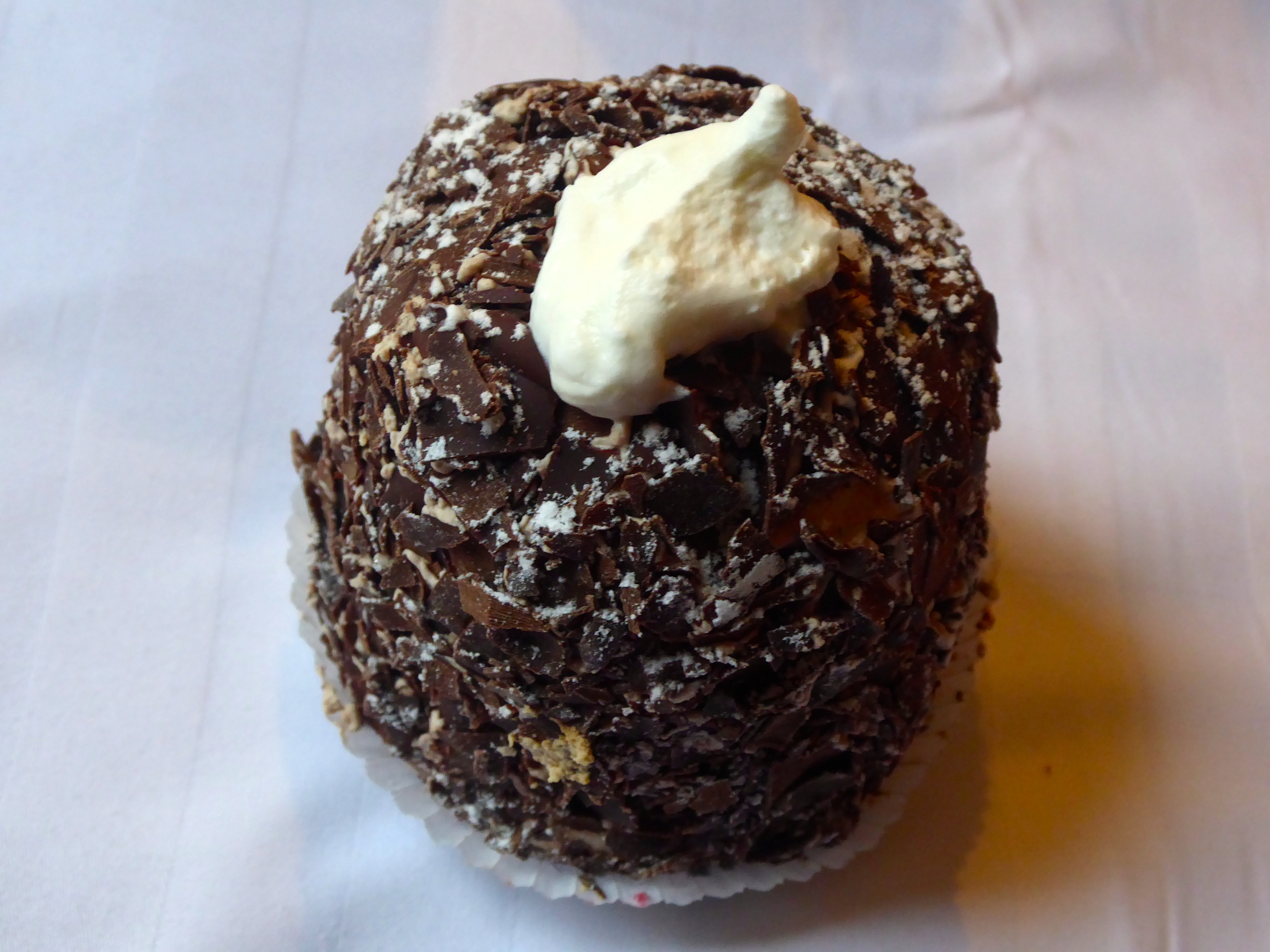 A cross-section of this pastry from NancyBuzz: 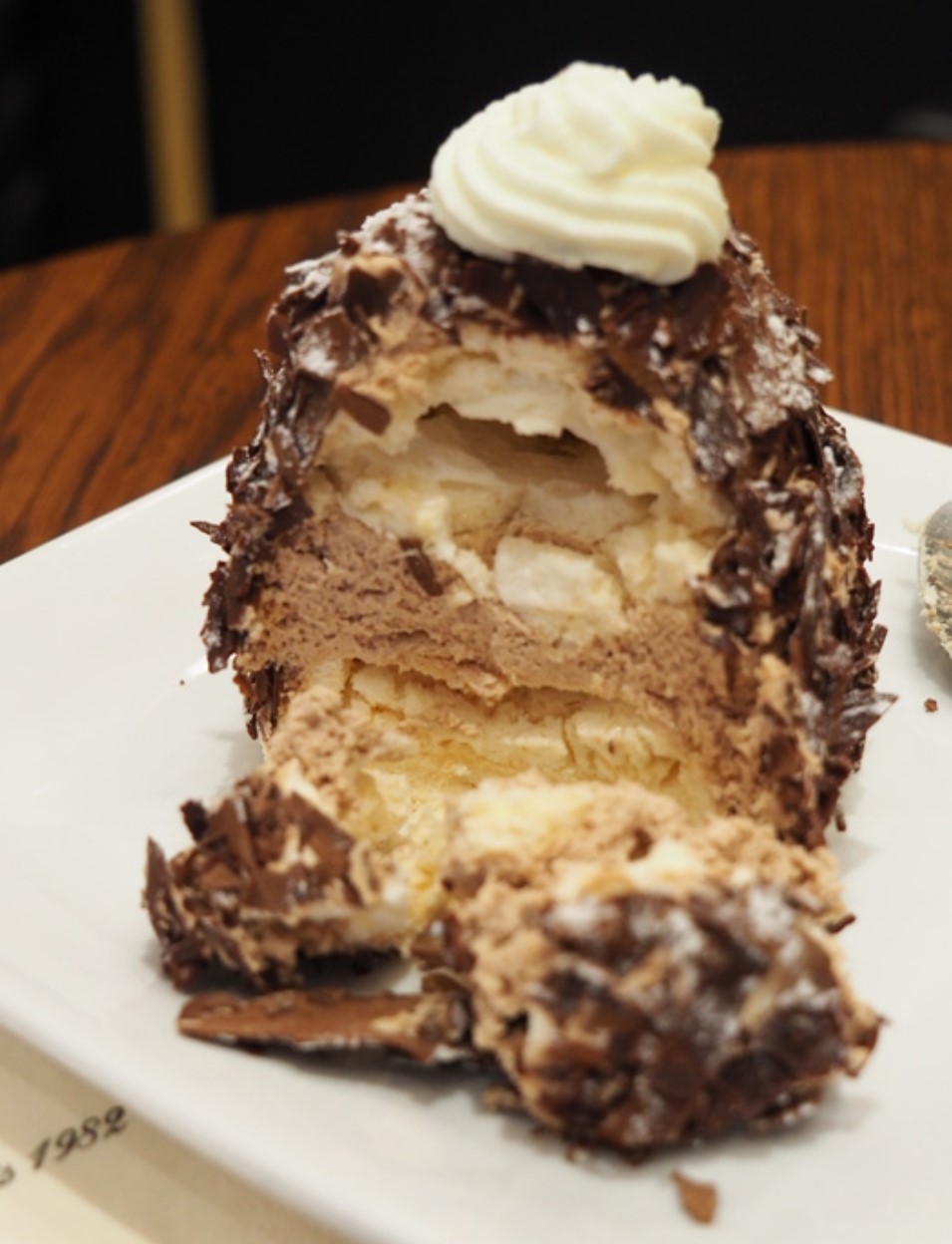 A bad meal made good by desserts.

22 thoughts on “Paris, day 7: Perfume and and a mediocre meal”