Yes, it’s a clickbaity HuffPost style title, but what the hell: it’s 6 a.m. and I have an hour until breakfast. So, if you’re coming to Paris and are a novice at dining out in France, I proffer some tips that my dining pal and I put together as a guide. This is not a matter of right or wrong (well, it is for specifying the degree of doneness of meat!), but of getting along and having a good restaurant experience. These tips apply not just to Paris, but widely throughout France.

There are exceptions to all of these “rules”, but in general it’s best to obey them. Note that I usually have my big meal at lunch, and the rules are even more applicable at dinner (for instance, you’d normally always have wine at dinner as well as the full sequence of appetizer, main course, and dessert). At lunch you can skip the wine and have only two courses (see below).

1.) RESERVE, RESERVE, AND RESERVE.  If you’re going to anywhere other than a café, reserve a table. Often a day in advance or even the same morning is sufficient, but don’t just walk into a restaurant and expect to be seated. Walk-ins are a lot less common here than in the U.S. or U.K. Likewise, if you decide not to go, please cancel your reservation as far in advance as possible. Restaurants count on their clientele showing up, and prepare accordingly. Some places will accommodate walk-ins, but it’s not the usual procedure.

2.) GREET THE OWNER OR WAITER WHEN YOU ARRIVE. This is part of the politesse (politeness) that is customary in France. “Bonjour!” will suffice. (Of course mention that you have a reservation and give your name.) And when you leave, say goodbye as well as thank you. This goes for shops as well as restaurants.

3.) DO NOT ORDER A SALAD WITHOUT A MAIN COURSE. If you want a salad, go to a cafe, which will serve lunch salads; but do not expect to get away with that in a restaurant. I’ve seen Americans thrown out of restaurants because they get seated and say they want just a salad. The normal procedure is to order an appetizer (entrée), main course (plat) and dessert, but as French eating habits have become lighter, many people skip the appetizer, or the dessert, at lunch. But you must have a plat and one other dish: appetizer plus main course, or main course plus dessert. You do not have to order wine, especially at lunch, but to me it always improves a meal.

3.) IF YOU DON’T SPEAK FRENCH, FIRST ASK IN FRENCH IF THE WAITER SPEAKS ENGLISH.  In Paris they normally will, but not in every other town, especially those where tourists are less common. (The phrase is “Parlez-vous Anglais?”). It is always polite to ask first, and often the waiter will spot you for an anglophone and speak to you first in English. I always try to speak French and get the French menu instead of an English one if they have both (food just looks more appetizing when it’s written in French than in English!). If you don’t speak French and the waiter doesn’t speak English, don’t worry: you will survive. There may be a menu in English, or you can look around and see what other people are eating and point.

If you struggle with your high-school French, the waiter may lapse into English. Do not be embarrassed: it facilitates ordering.

If the waiter doesn’t speak English, do not repeat yourself or speak louder. These are useless endeavors.

4.) DO NOT CONVERSE LOUDLY IN THE RESTAURANT. The French speak more softly than Americans, and look down upon loud conversation in a restaurant, which disturbs the atmosphere the same way using a cellphone on the bus jangles Americans. It is useful to keep your volume low almost everywhere to conform to local customs.

5.) DO NOT ORDER BEEFSTEAK, LAMB, OR DUCK BREAST WELL DONE. Often the chef will refuse to cook it that way, as the French properly consider that a well-done steak (or lamb) is ruined. You can get your steak almost raw with a slight sear (bleu), quite rare (saignant: the way I order mine), à point (medium rare), and bien cuit (well done). Stay away from the last one. Lamb and duck breast are served “rosé” (pink) unless you specify otherwise, but try not to specify otherwise. I’ve put a photo of a properly cooked duck breast below. Try it (or lamb) pink even if you’re not used to it. They taste a lot better.

It goes without saying to avoid asking for ketchup, even with fries. It just isn’t done, and you may wind up with your bum on the pavement. (Note, this rule may not apply in McDonald’s, but I don’t know.)

UPDATE: 5a.) TIPPING IS OPTIONAL. Service charges are included in the bill; it’s as if you were dining in America and the bill was 15% higher for service. Therefore, it’s not necessary for you to leave a tip. I nearly always leave a few euros (say, 5% of the bill), but this time I’ve observed quite a few French people leaving the table, and they very often don’t leave a tip. (They haven’t done this on the credit-card machine, as that’s not possible here.) If you don’t have a few euros in cash, you needn’t feel guilty about not leaving a tip.

Some other tips: You don’t need to order expensive wine in a restaurant. The house wine is often quite good and much cheaper. Increasingly, restaurants offer wine by the glass. If you don’t want to pay for water like Evian or Perrier (Perrier isn’t often drunk with meals), tap water is preferable and also free. Just ask for une carafe d’eau (a carafe of water). Make sure you say “please” when making a request (s’il vous plaît”) and make liberal use of “thank you” (merci).

The cheese course used to be obligatory between the main course and dessert, but is becoming less common as the French strive to eat healthier. I still love a good cheese course but don’t often have room for it.

In most but not all places it’s frowned on to split main courses. And the French do not like it when Americans ask for separate checks. The custom in France is for the host, or whoever invites the other person out, to pay for the meal.

The French do not hustle you out of restaurants: when you reserve a table for lunch or dinner, you have it the whole time, even for three or more hours. If they are a proper restaurant, they will not bring you the check until you ask for it. So you must request the bill (“L’addition, s’il vous plaît.”) It is up to you to end your meal. Dining in France is not just a food experience, but entertainment as well. Take your time, look around, chat with your neighbors, and sip your wine. (One bottle = two servings.)

Finally, the menu (fixed-price meal) is often a great bargain at lunch, with two or three courses that are often much cheaper than ordering separately from the regular menu (à la carte). Your selections may be limited, but they are often specialities and worth ordering 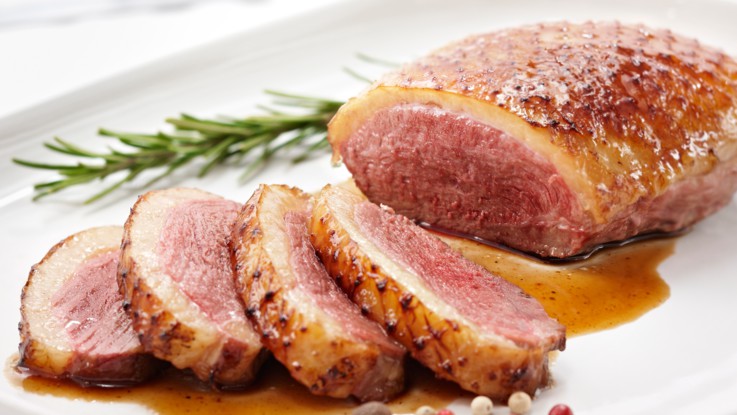