It was a rainy day in Paris, but that lends some atmosphere to the place as the boulevards become glistening black. Umbrellas in hand, we set off for a morning walk. As the rain was pretty steady, it was time to go indoors—to France’s spiffiest department store: the Galeries Lafayette on Boulevard Haussmann in the 9th arrondissement.

On the way, we saw a cat poster: 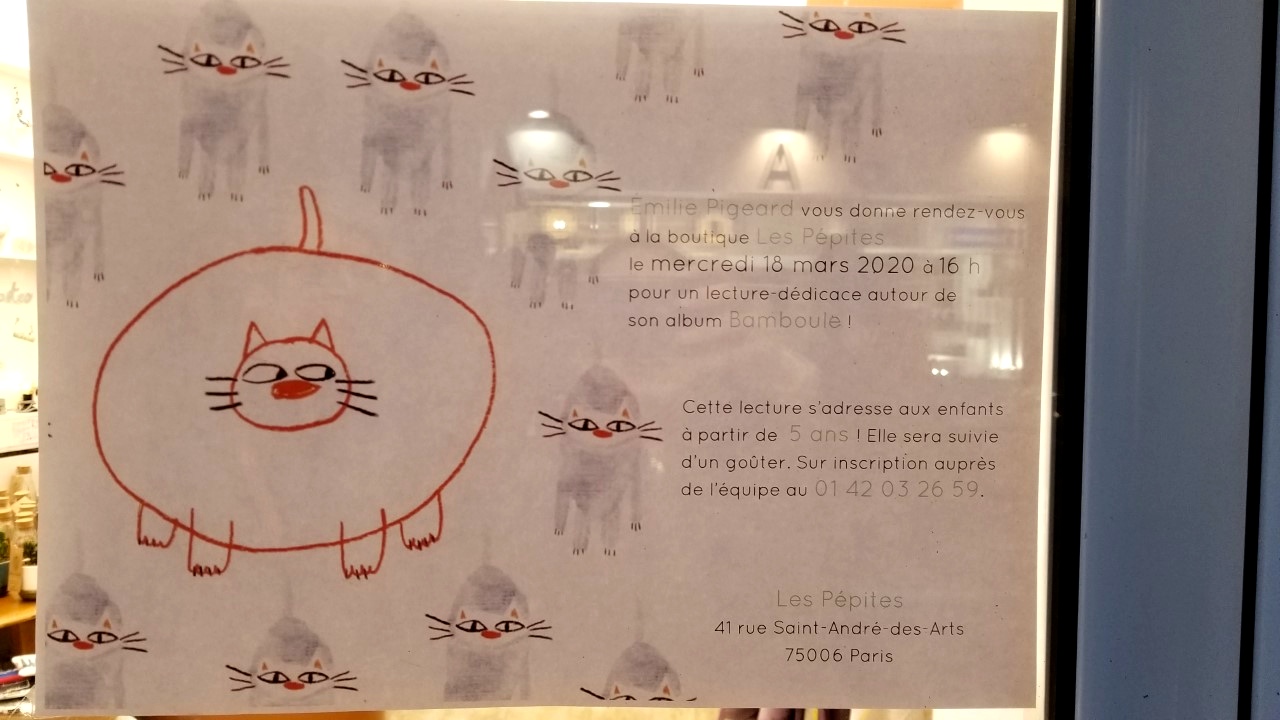 Further along you pass the Opera House, called the Palais Garnier, a baroque extravaganza built between 1861 to 1875 and one of the architectural highlights of Paris.

One can take tours of the inside, but it was closed today. We settled for visiting the bookshop.

Lovely opera lamps on sale in the bookshop:

There was a mirror on the ceiling, so of course I took a self portrait:

And into Galeries Lafayette, where there are mini-boutiques selling the famous names of French fashion: Chanel, Gucci, and of course Yves:

The Balenciaga boutique sold Hello Kitty purses. I didn’t look at the prices, but you can believe that they’d be stratospheric.

The Galeries is built on an open plan, and you can walk a catwalk halfway up to get a good view of the floors below and the gorgeous stained-glass dome ceiling:

While much of women’s fashion in France is gorgeous, men’s haute couture is dreadful. I couldn’t believe some of the stuff they were selling as men’s clothes. I would never wear this, nor have I seen any Parisians wearing this dreck, except on the runways. Look at this stuff!

I checked the prices of the Gucci vest and matching shorts on the adjacent model. 1400 euros for the vest and 830 euros for the shorts! (That’s $1539 and $912 US respectively.) As Dolly Parton said, “It’s takes a lot of money to look this cheap.”

Oy! These designs look as if they were painted on the side of American fighter planes during World War II.

And what’s up with this? Is there a fly problem in Paris, so that they have to ape Australian “cork bobble” hats? I’ll believe this is men’s fashion when I see any men wearing this stuff on the streets of Paris.

A real cowboy would punch this lame-o out.

The best part of the store is its justly famous food hall. It’s a great place to go before lunch to get the saliva flowing. Nice bread:

The finest Jamón Ibérico, only 330 euros per kilo!

Piles of lovely spice mixtures, and whole sections of fancy salts and peppercorns (not shown):

“La Bourse” is the nearby stock market, and so the phrase literally means “The stock market and life”, but I’m told it means something like “Your money or your life.”

Sure enough, though the food tasted okay, it wasn’t spectacular, and—worse—there wasn’t much of it, although my dining pal was happier than I was.

Inside. It’s a very small place. Maybe it was simply too small to allow the kitchen to give us decent quantities of food! (Yes, I am a gourmand, not a gourmet. But if you like good food, you want a lot of it!)

Bread and a tzatziki-type appetizer with cucumbers in yogurt to put on the bread. Well, the bread was good. . .

The menu consisted of an assortment of no-choice appetizers and a choice of steak or fish. The appetizers: three niggardly portions of vegetables, which must be “an American twist” on French food. These were in my belly within a few minutes of being served, and in France that’s not right.

Veggies: carrot slices marinated in something or other, yellow beetroot, and a thin layer of endive with a piece of smoked fish and crème fraîche. This should have been an amuse-bouche, not an entrée! 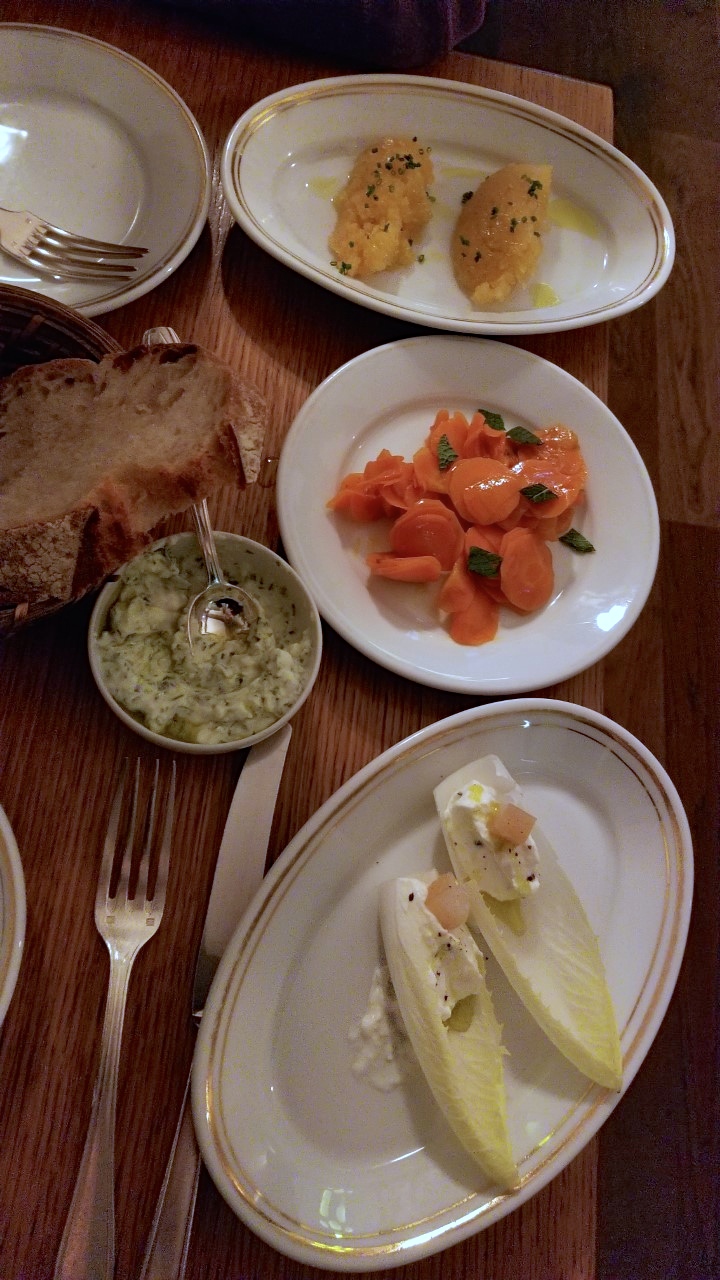 I had a steak au poivre, cooked rare, with frites. It was good but again, not a lot of beef there. And it was served sliced. If I wanted someone to cut up my steak before serving it to me, I would have asked my mother!

The fries were good, though the portion was again meager.

My dining pal got the fish, which was whiting (“merlan”), served on a bed of roasted eggplant with watercress garnish.

Neither of us were near satiation, and decided to skip dessert, also likely to be meager, in favor of a visit to a couple of pastry stores back on the Left Bank. On the way back, we admired the lovely architecture of the area, including (second photo), the Bourse itself:

Time for treats! First a visit back to the Isabelle to get a croissant, and I wanted some sweet stuff.

The famous croissant (again). Most bakeries have them available only in the morning, but Isabelle’s, because it won a prize for the item, keeps making them until they close at about 8:30.

Isn’t it a beaut?

My haul: a croissant aux amandes (almond croissant). Oy, was this good!

I also had a “koign-amann” (pronounced “Queen Amann”), a pastry from Brittany. I’ll let Wikipedia describe it:

Kouign-amann (pronounced [ˌkwiɲ aˈmãn]; pl. kouignoù-amann) is a Breton cake, described in the New York Times as “the fattiest pastry in all of Europe.” The name comes from the Breton language words for cake (kouign) and butter (amann). It is a round multi-layered cake, originally made with bread dough (nowadays sometimes viennoiserie dough), containing layers of butter and sugar folded in, similar in fashion to puff pastry albeit with fewer layers. The cake is slowly baked until the butter puffs up the dough (resulting in its layered structure) and the sugar caramelizes. The effect is similar to a muffin-shaped, caramelized croissant.

Well, I couldn’t deny, after eating it, that it might well be the “fattiest pastry in all Europe.” But it sure was good! OMG was it good. . . 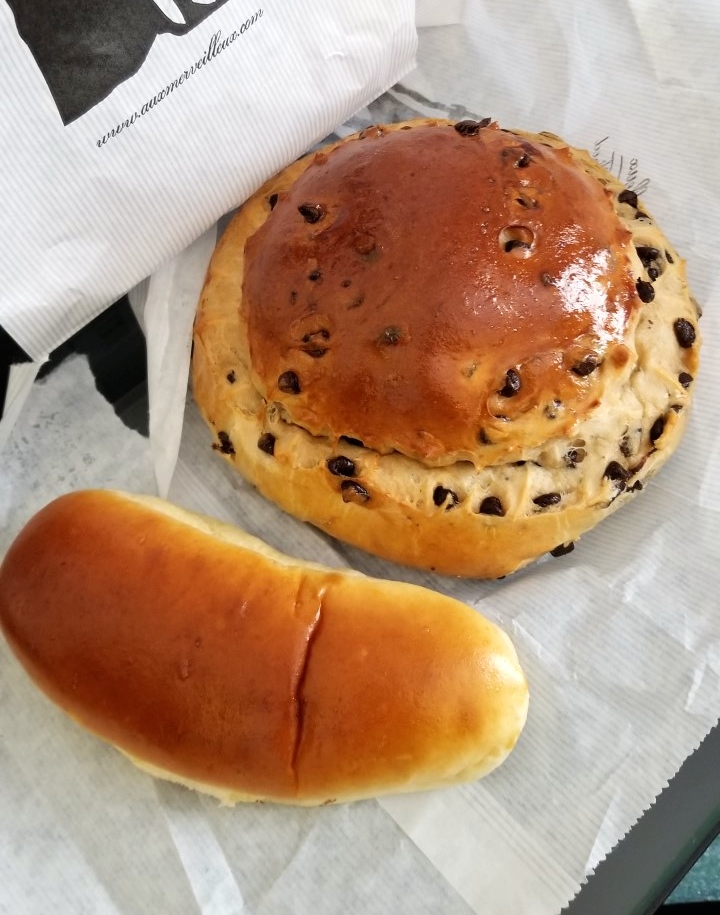 The bakery for the two items above, almost next door to Isabelle, is Aux Merveilleux de Fred, and its specialty is a cake called Merveilleux, which, as Wikipedia notes, “consists of a sandwich of two light meringues welded with whipped cream which has been covered with whipped cream and dusted with chocolate shavings.” Here are some for sale.

A dignified French lady of a certain age bought one right before my own purchase, and when I walked back to the hotel she was shoving it down her gob on the street. These must be good. I will try one before I leave.

When we were there, two young women were making giant cakes, “Incroyables” (“Incredibles”). The description: 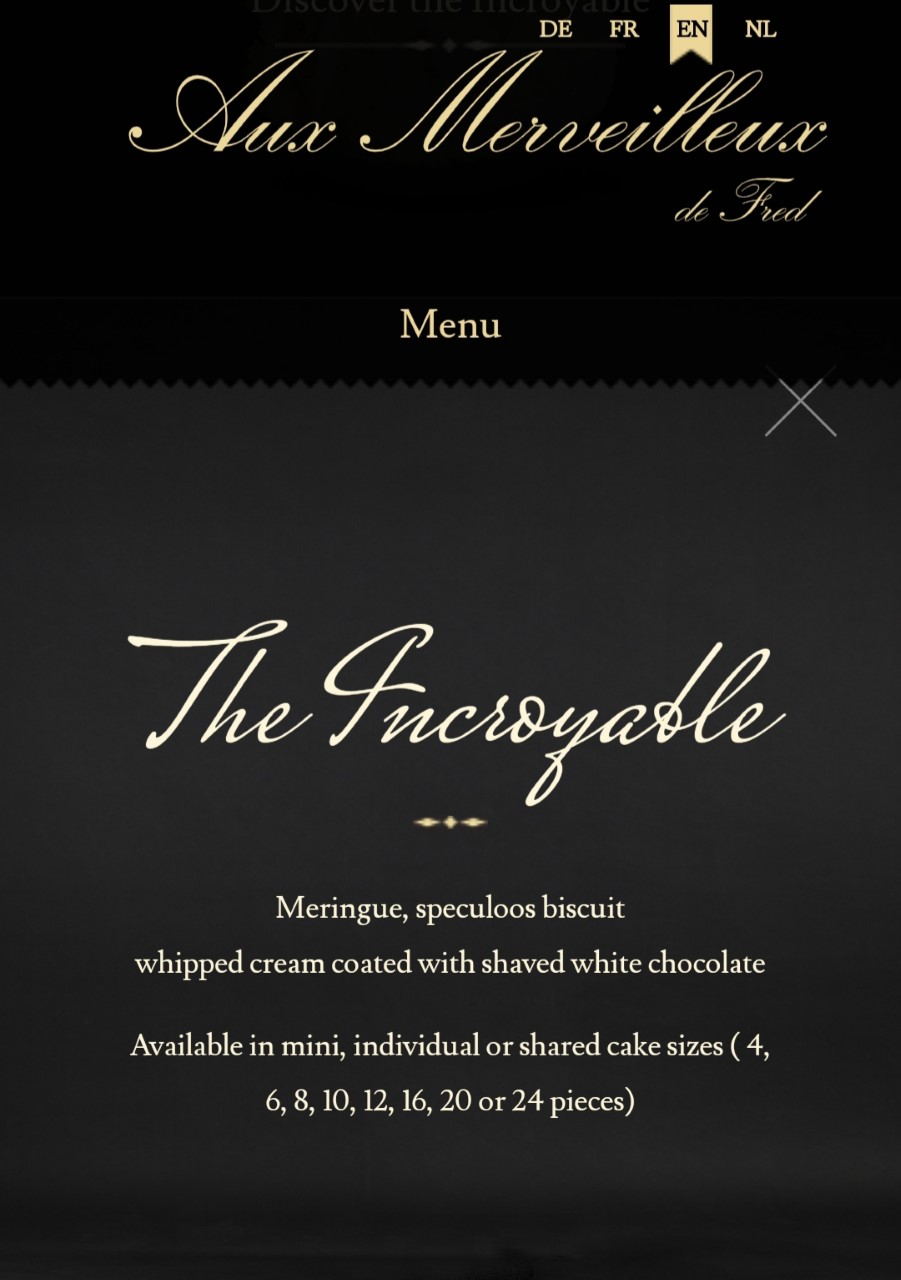 Frosting the meringues with whipped cream:

And coating it with white chocolate shavings. This is a very good place, and you should go there–and to Isabelle.

With an almond croissant and a koign-amann in my tummy, I finally achieved the desired level of satiation.