In a comment on this morning’s Hili post, reader “Snake” called attention to the publication in today’s Guardian of “The Long Read”, which happens to be a nice big extract from Matthew’s new book, The Idea of the Brain: The Past and Future of Neuroscience. The book will be out March 12 in the UK and April 21 in the U.S. Here’s the U.S. version (click to go to Amazon site): 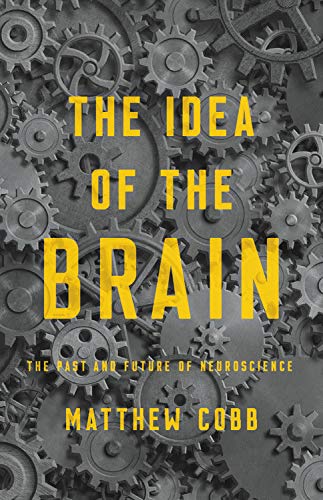 As I said before, I read the book in galleys and recommend it highly. It’s a history of ideas about how the brain works, starting from the ancient Greeks and proceeding on to today. It’s more a history of science combined with science than a pure scientific discussion about the brain. It turns out that at each period of time, scientists derived their ideas about how the brain works from their contemporary technology, ergo the title of the extract below.

And, as Matthew notes, we still know very little about the brain works, though he’s convinced that knowledge will accrue slowly. He also has no patience for panpsychism—the idea that consciousness is somehow inherent in each particle of matter rather than a phenomenon that arises when the brain reaches a certain level of complexity.

Here’s my blurb on Amazon (it’s on the cover too):

“In this engrossing book, Matthew Cobb deftly recounts the tortuous history of research on the brain, in which researchers pursue the hard problems of memory, consciousness, and volition, always limited by forced comparisons between human brains and the machines available at the time. A work of history and deep scholarship, but written in an engaging and lively way, The Idea of the Brain is optimistic about the recursive attempts of our brains to understand themselves, yet reminds us that the three most important words in science are, ‘We don’t know.'”―Jerry Coyne, author of Why Evolution is True

Read the extract by clicking on the screenshot below. I’ll give just one brief bit: 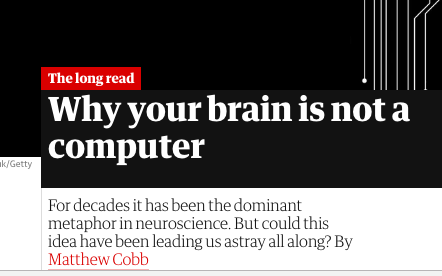 This is in fact the last paragraph of the book. I like the last one-word sentence:

There are many alternative scenarios about how the future of our understanding of the brain could play out: perhaps the various computational projects will come good and theoreticians will crack the functioning of all brains, or the connectomes will reveal principles of brain function that are currently hidden from us. Or a theory will somehow pop out of the vast amounts of imaging data we are generating. Or we will slowly piece together a theory (or theories) out of a series of separate but satisfactory explanations. Or by focusing on simple neural network principles we will understand higher-level organisation. Or some radical new approach integrating physiology and biochemistry and anatomy will shed decisive light on what is going on. Or new comparative evolutionary studies will show how other animals are conscious and provide insight into the functioning of our own brains. Or unimagined new technology will change all our views by providing a radical new metaphor for the brain. Or our computer systems will provide us with alarming new insight by becoming conscious. Or a new framework will emerge from cybernetics, control theory, complexity and dynamical systems theory, semantics and semiotics. Or we will accept that there is no theory to be found because brains have no overall logic, just adequate explanations of each tiny part, and we will have to be satisfied with that. Or –

13 thoughts on “An extract from Matthew’s new book”