I think the three items in the title just about cover most of what’s interesting in Paris. When you Americans are reading this post after breakfast, I’ve already downed a huge lunch and am back in my hotel for a postprandial nap. In fact, I’m fighting to stay awake typing this. It’s not jet lag, as I slept 11 hours last night (about twice my usual aliquot): it’s food coma, and a post-lunch siesta is highly recommended when you ate as much as I did.

But lunch was preceded by several hours of walking. Walking in Paris, especially with no particular goal, is one of the best things to do, as you’re always coming across interesting shops, bits of architecture, and local ambiance that are absorbing and often surprising. It also sharpens one’s appetite.

First, the view from my hotel room, which is at a major intersection: the Blvd. St. Michel and the Blvd. St.-Germain in the Sixth. But the hotel is surprisingly quiet, with no traffic noise, and this is about as central as you can get if you want to stay on the Left Bank. And it’s surprisingly affordable for a decent hotel in such a place. 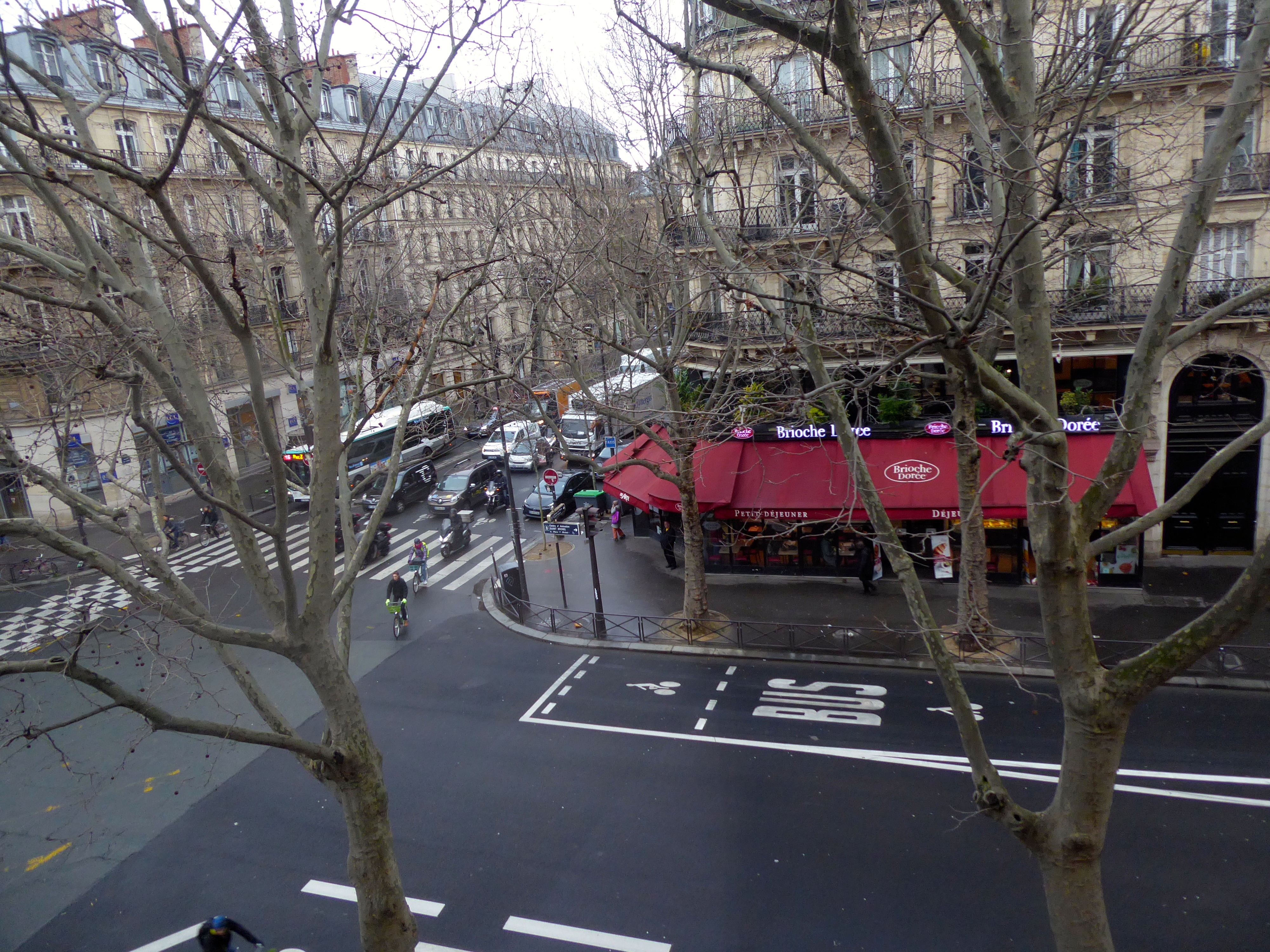 From wanderings. A book in a shop nearby: 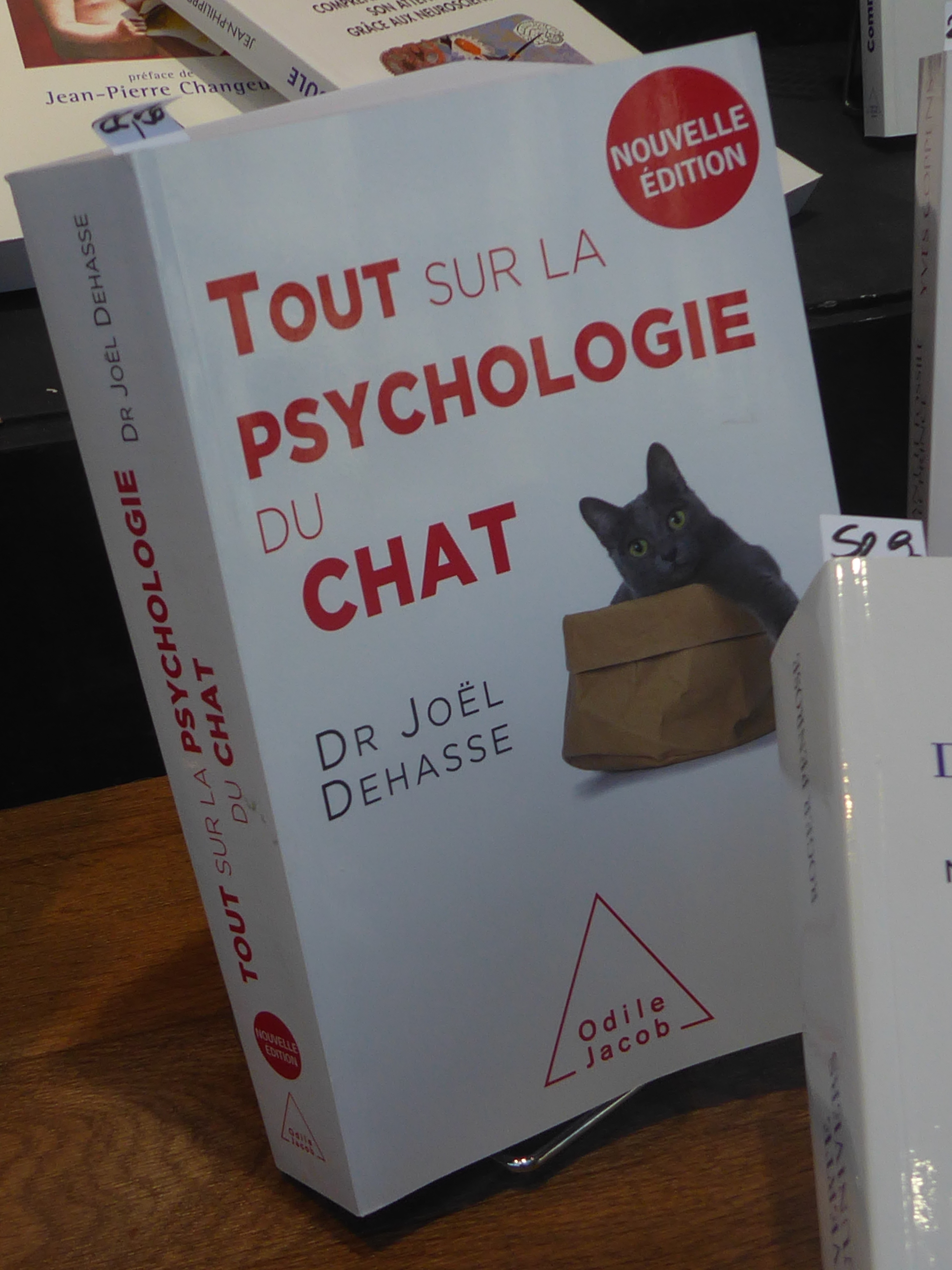 A store selling only fancy marshmallows in different flavors. I must try one! The flavors shown are litchi, banana, citron, pistachio, and anise. But they have many more flavors on offer. 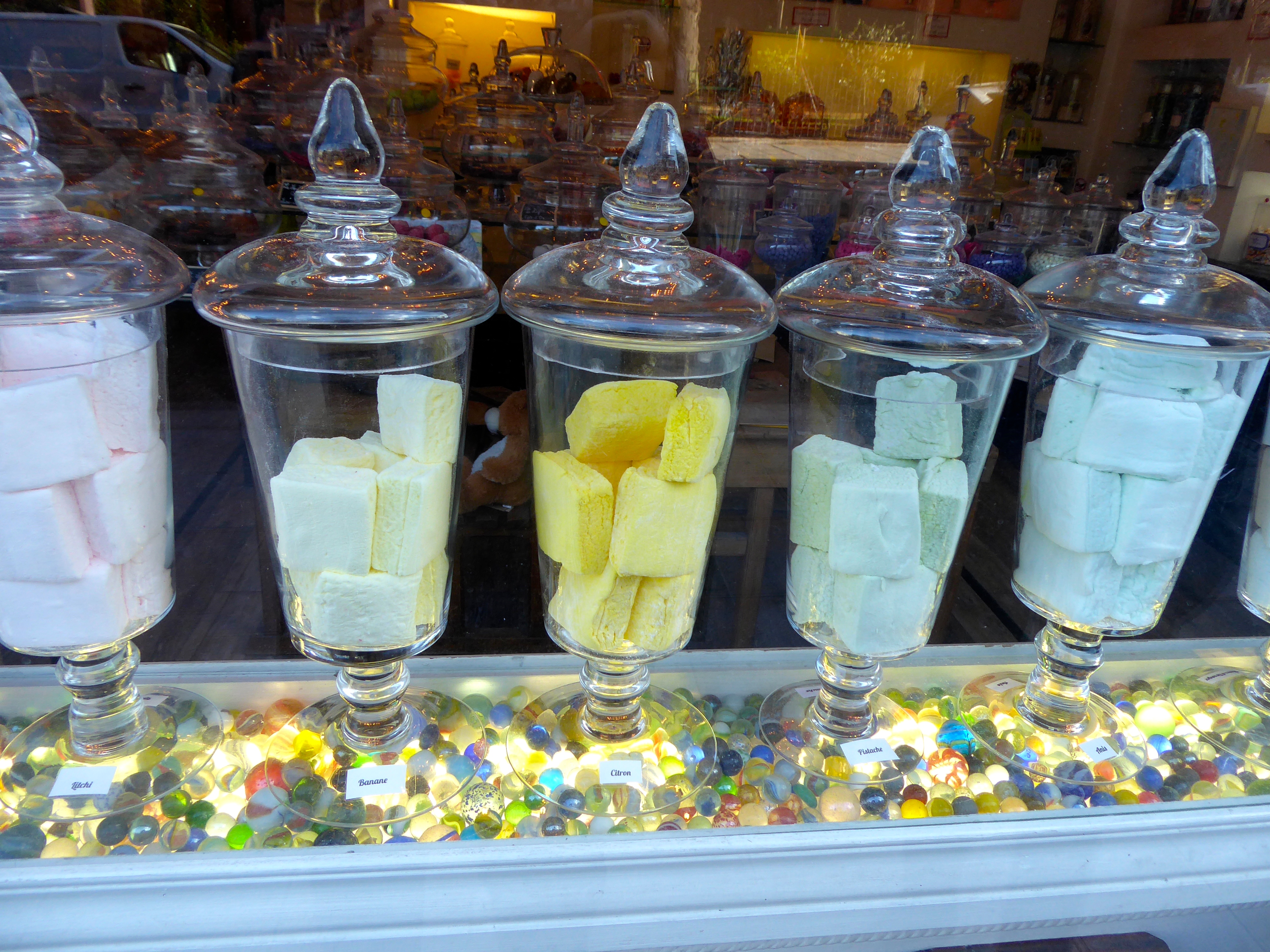 Pain de mie, a bread made with sugar and milk. A nice breakfast treat, but I don’t allow myself breakfast here, as it occupies space needed for the noontime field work. 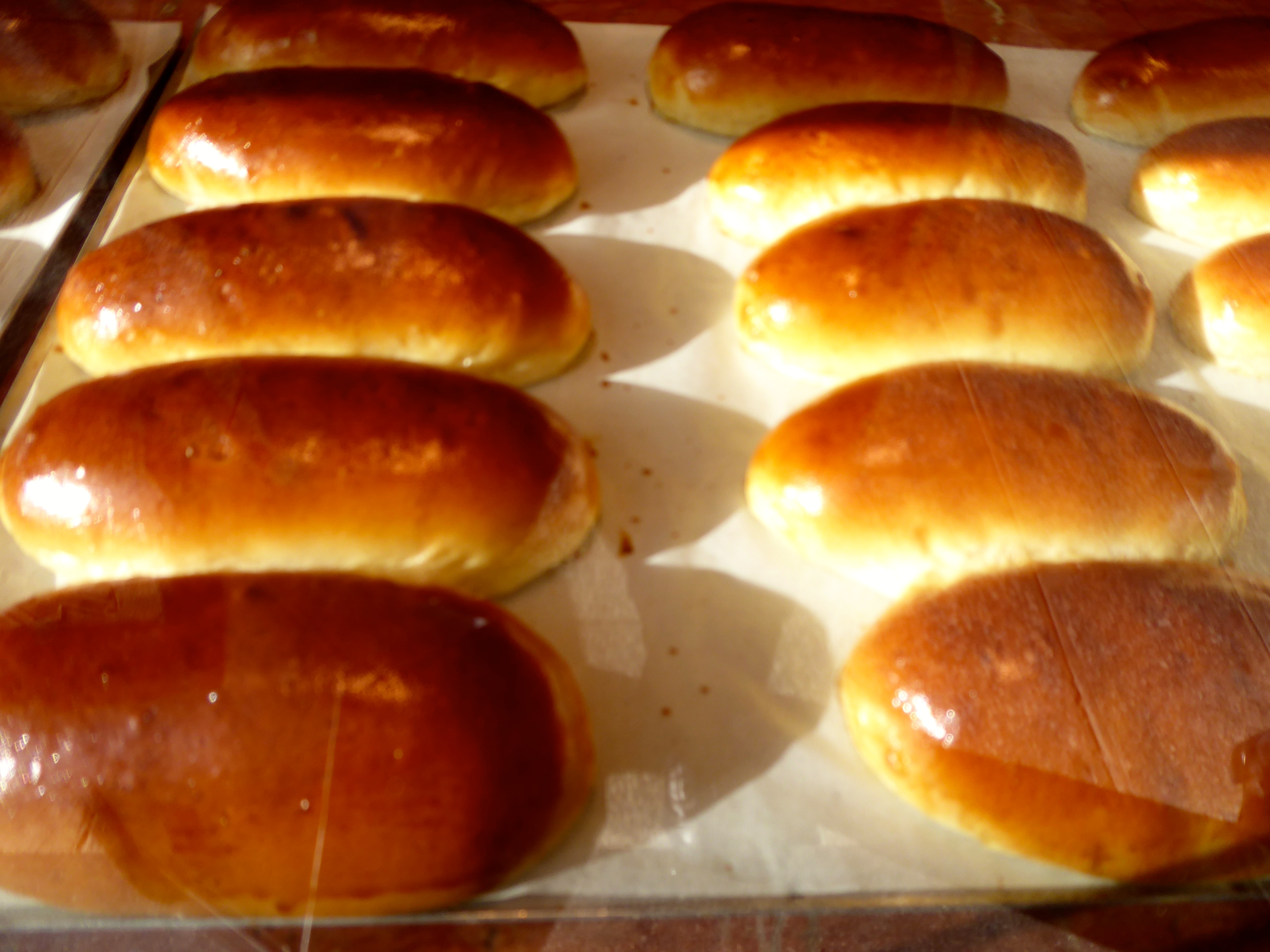 A nice cheese store at the market on Rue Monge. Why don’t they sell cheese like this in America? (I know, it doesn’t travel well, Americans don’t like a lot of cheese, and raw-milk cheese is mostly forbidden to import.) What a pity. 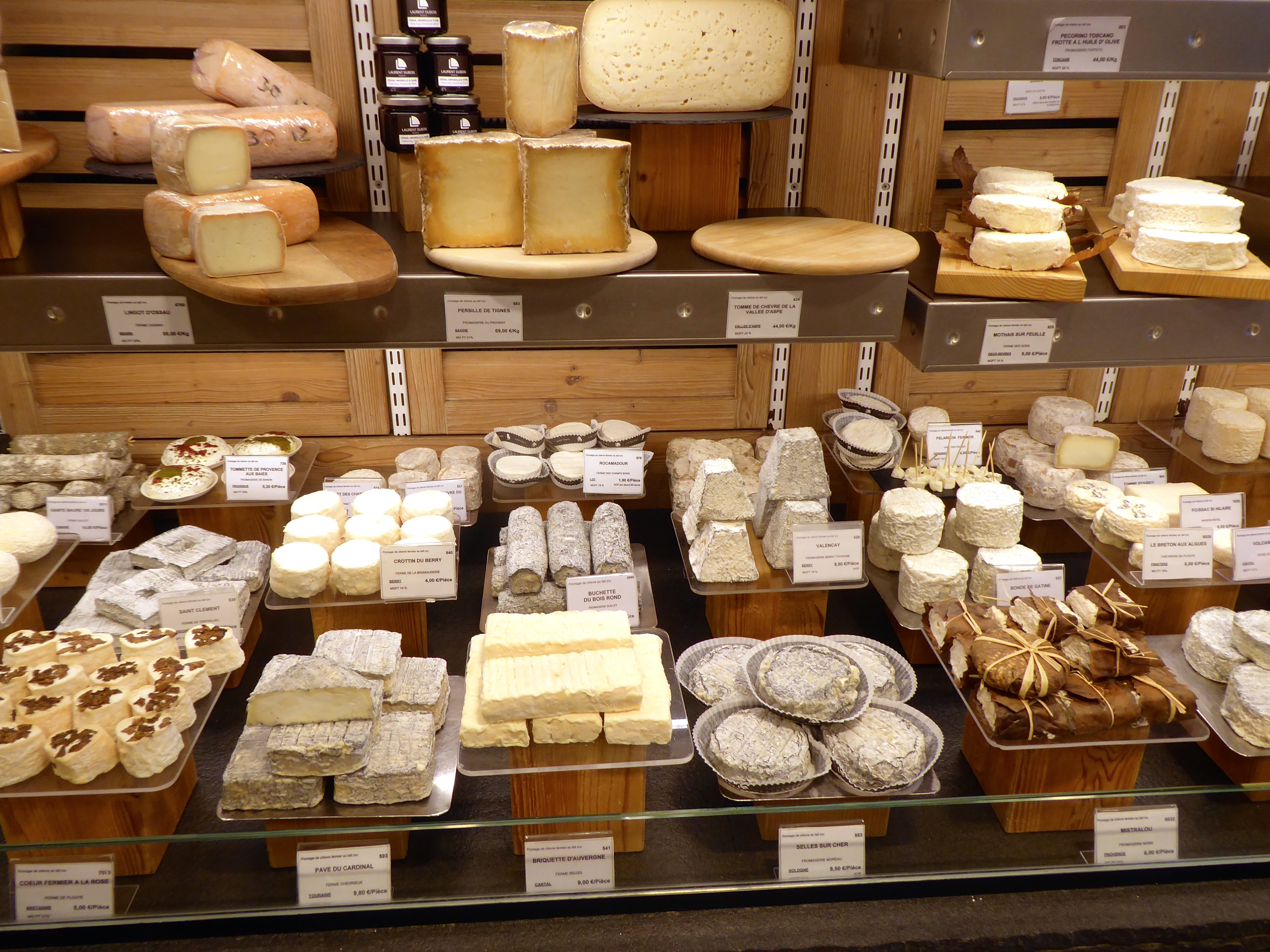 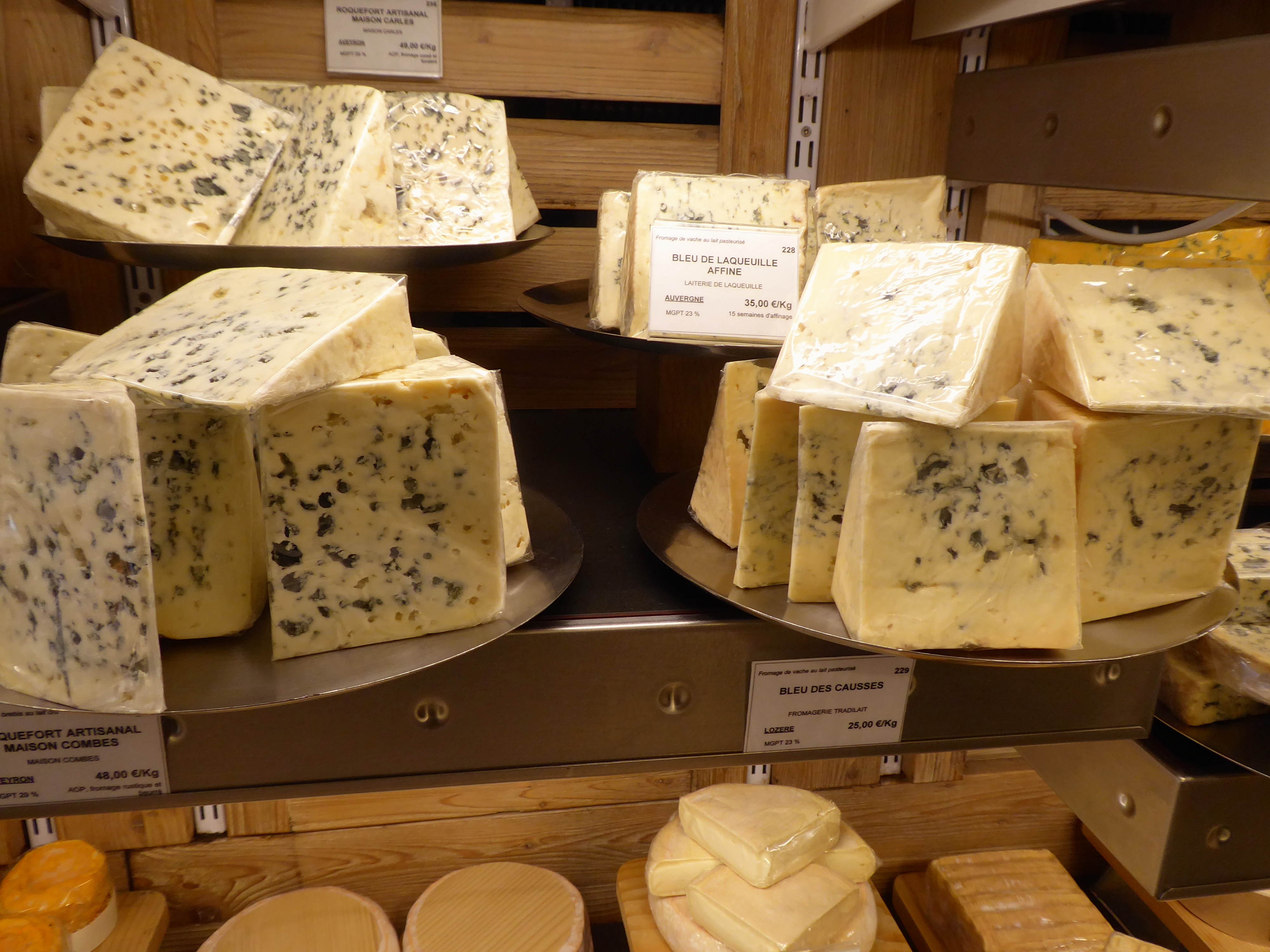 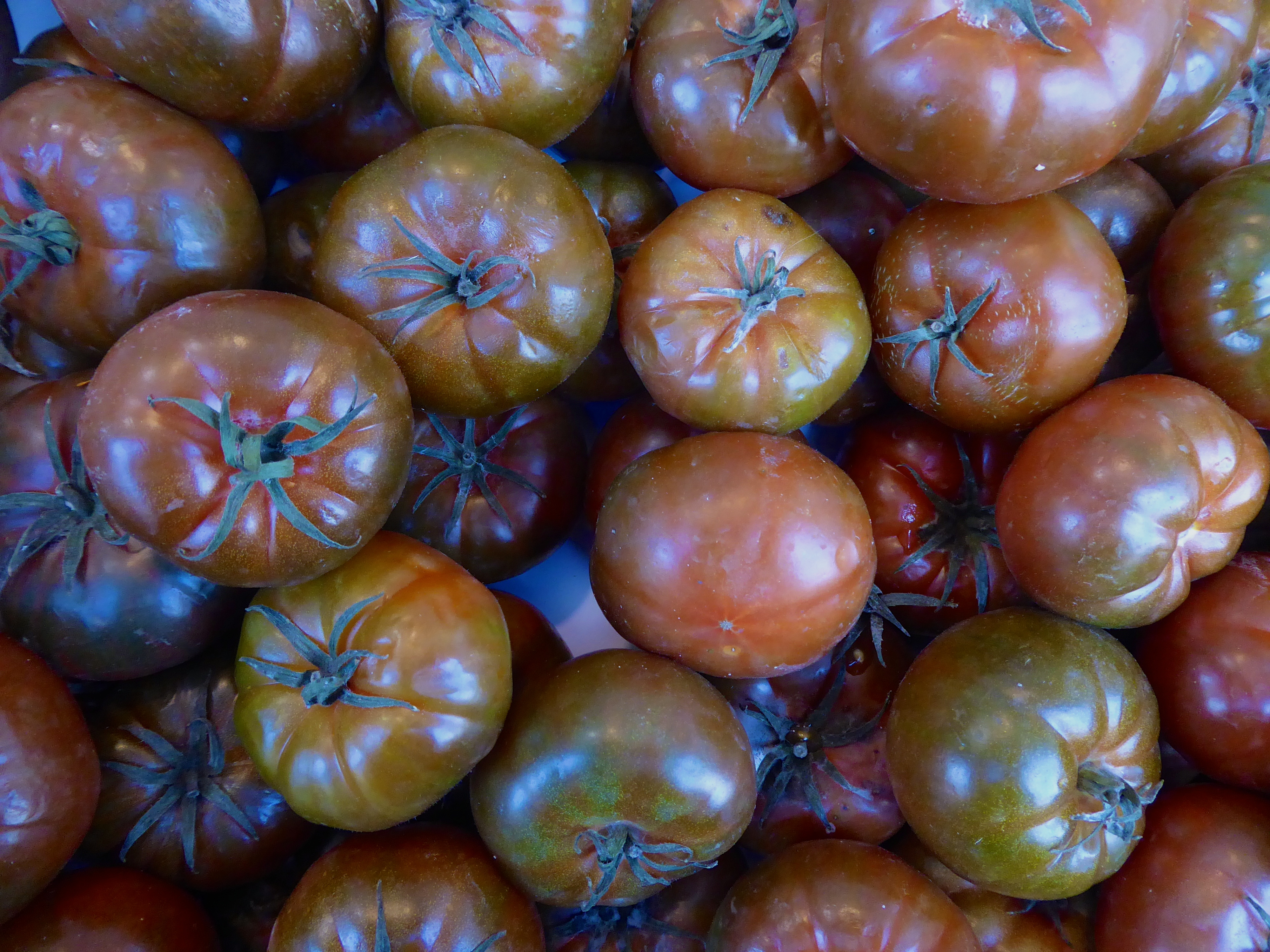 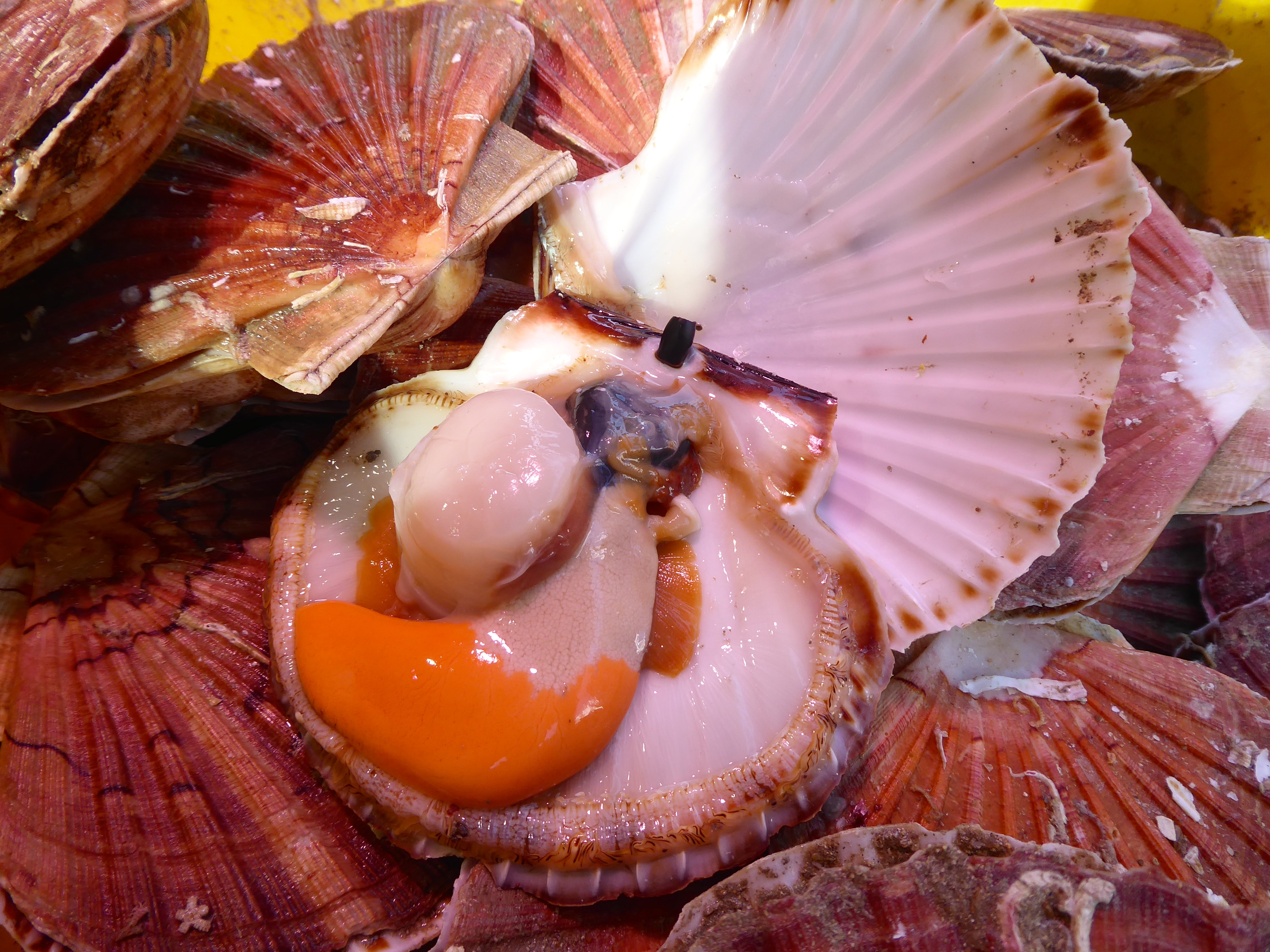 The skin of a fresh mackerel in the market: 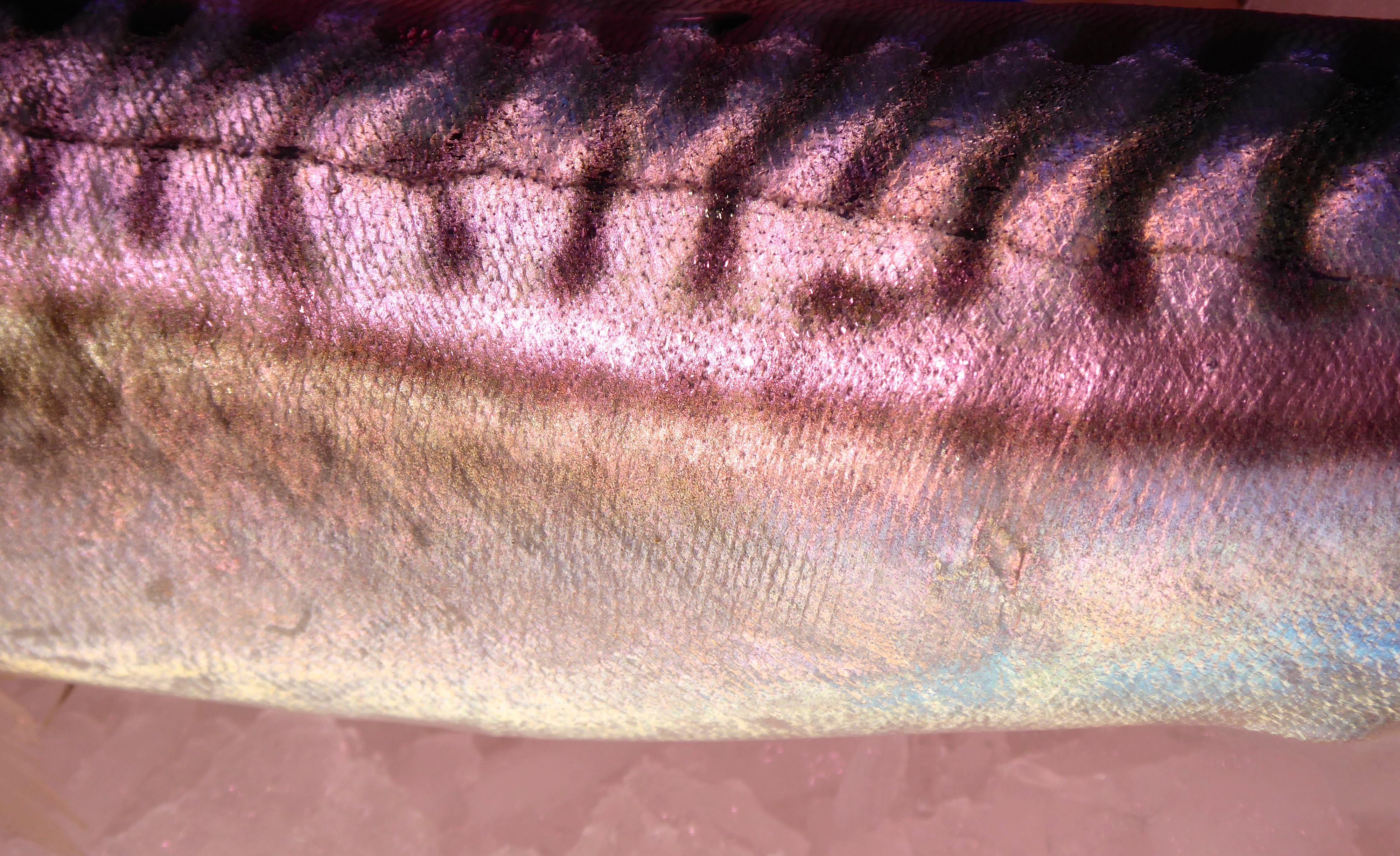 A maiden in the decorations on a door: 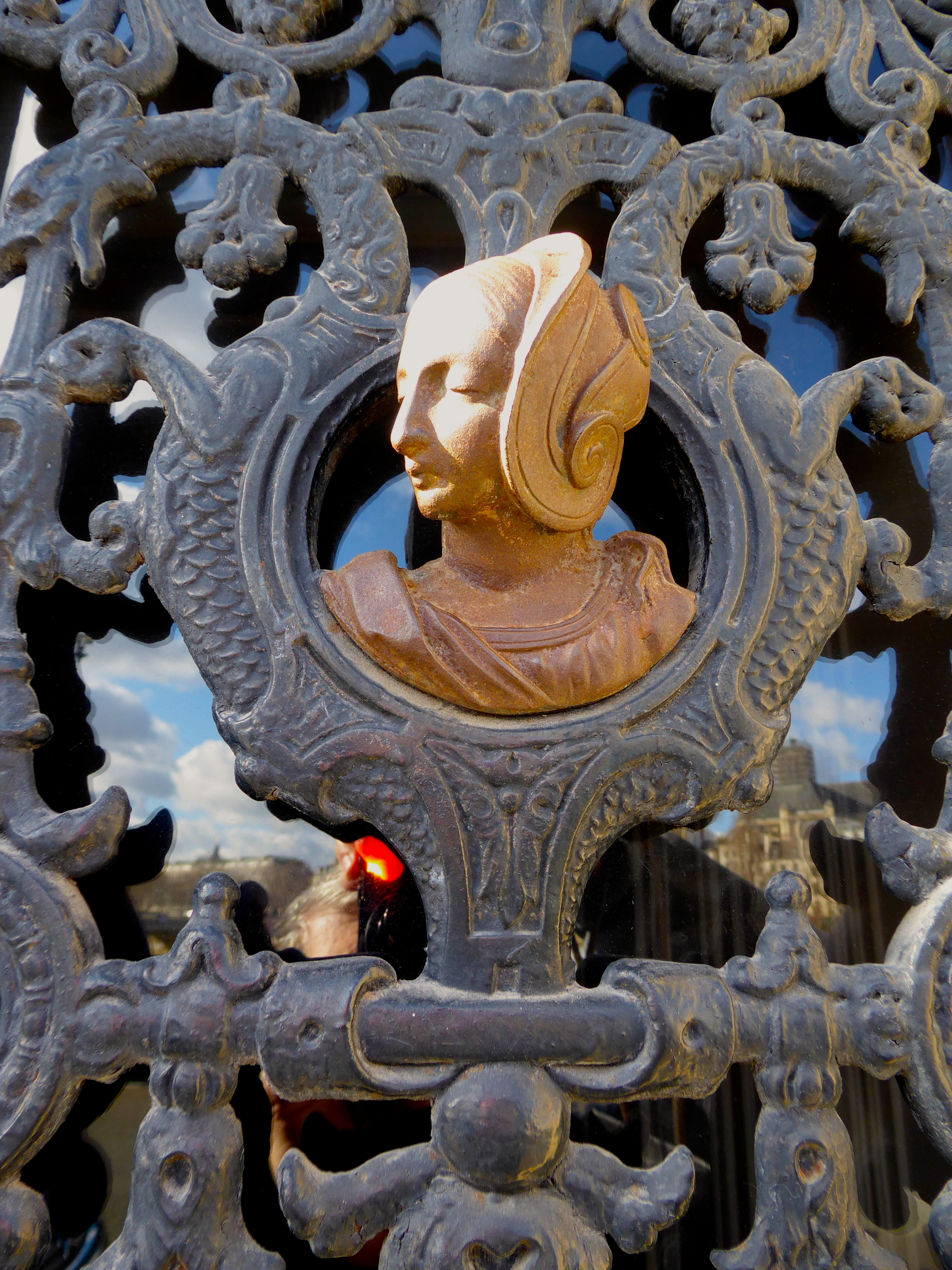 Notre Dame is still standing, but after the fire (April 15, 2019), it’s in bad shape. The spire and much of the middle is gone, but the two northern towers are standing (and much cleaner), as is the rose window. But the damage is severe, and I’m not yet sure how it will be reconstructed. At one time they were talking of (ugh) making it more modern, which I think would be a shame.

You can’t get close to the building as it’s surrounded by high walls, but you can see how they’re dealing with the damage. Even the flying buttresses have been reinforced or rebuilt. 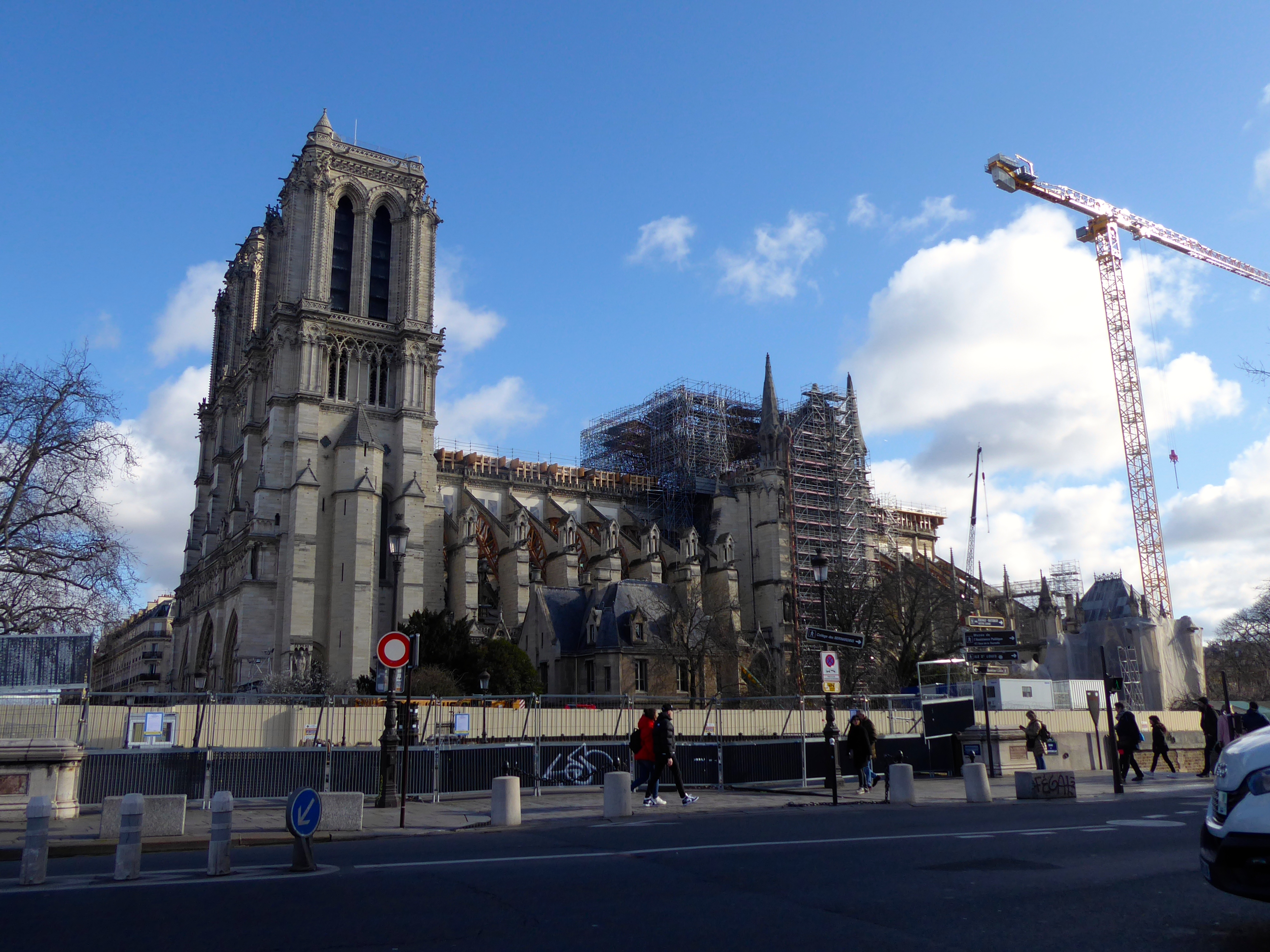 Buttresses for the buttresses: 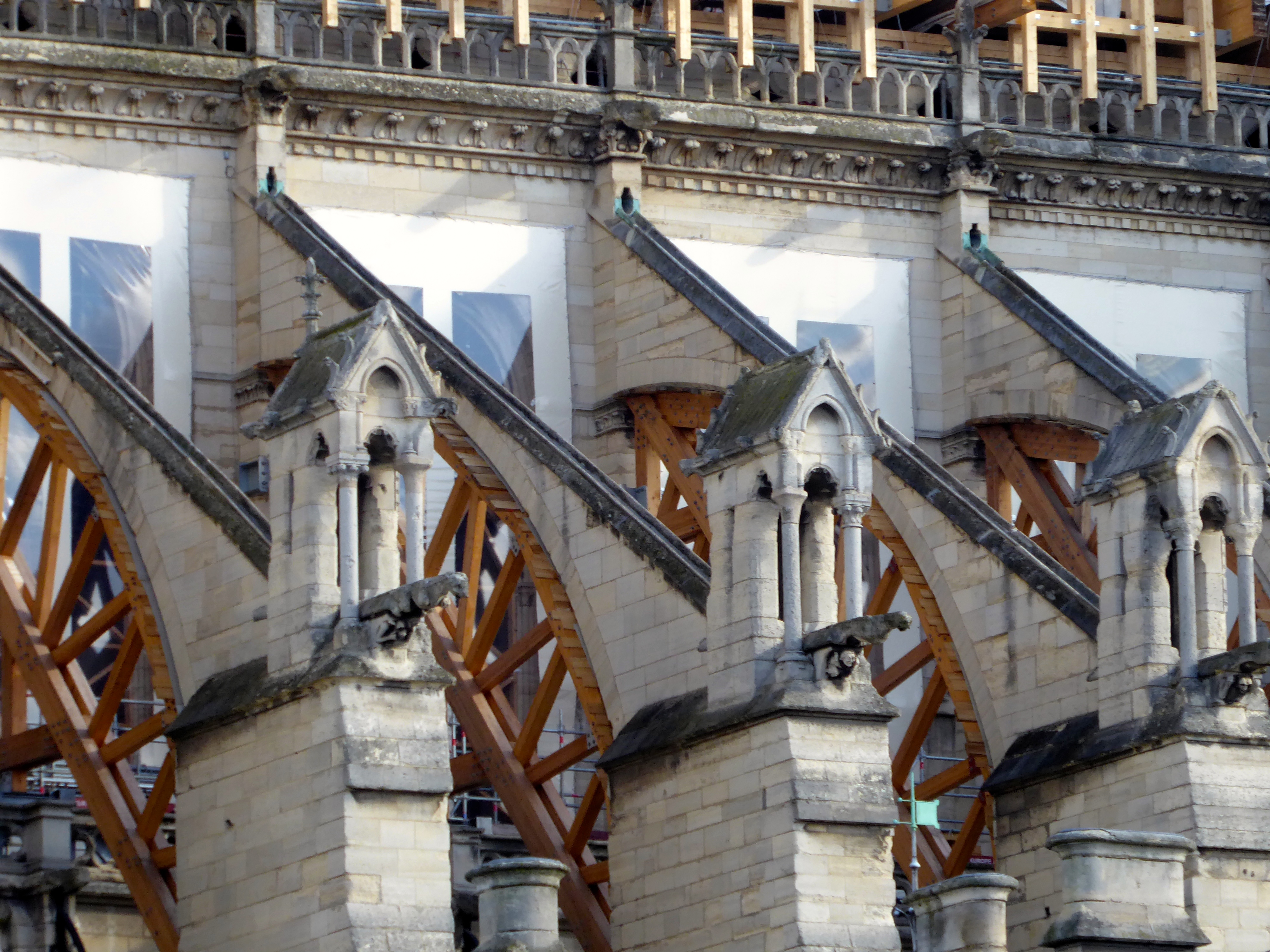 View from the rear: 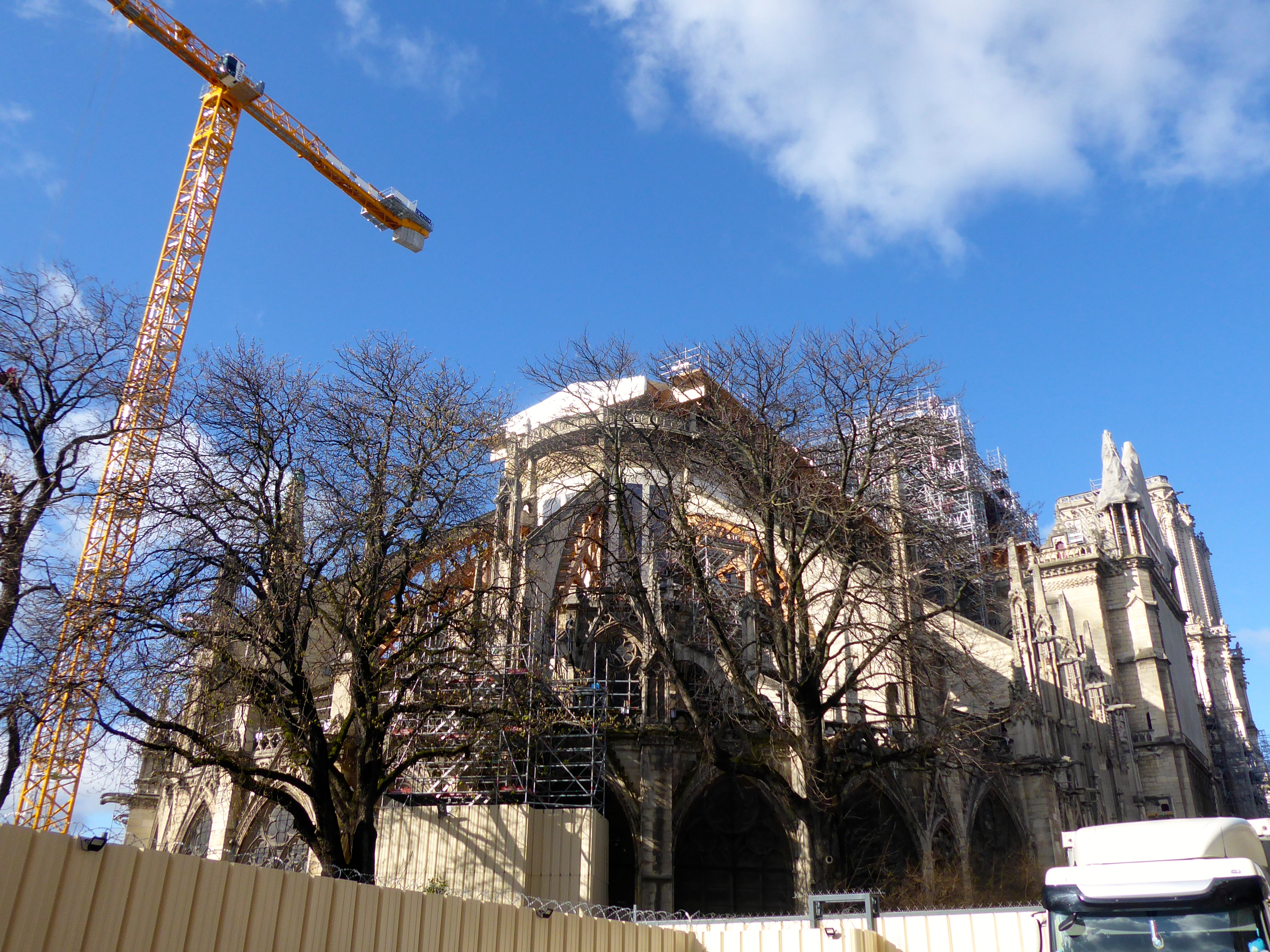 Across the river lies Shakespeare and Company, a famous independent bookstore founded (in another Paris location) by Sylvia Beach in 1919, but now located right across from Notre Dame. Because of its literary reputation (many famous authors visited the original store, which also first published Ulysses in 1922), it remains a mecca for literary Anglophones. I went to see its famous cat, Agatha. (You can see Aggie’s page at Hotels with Cats, a great website). 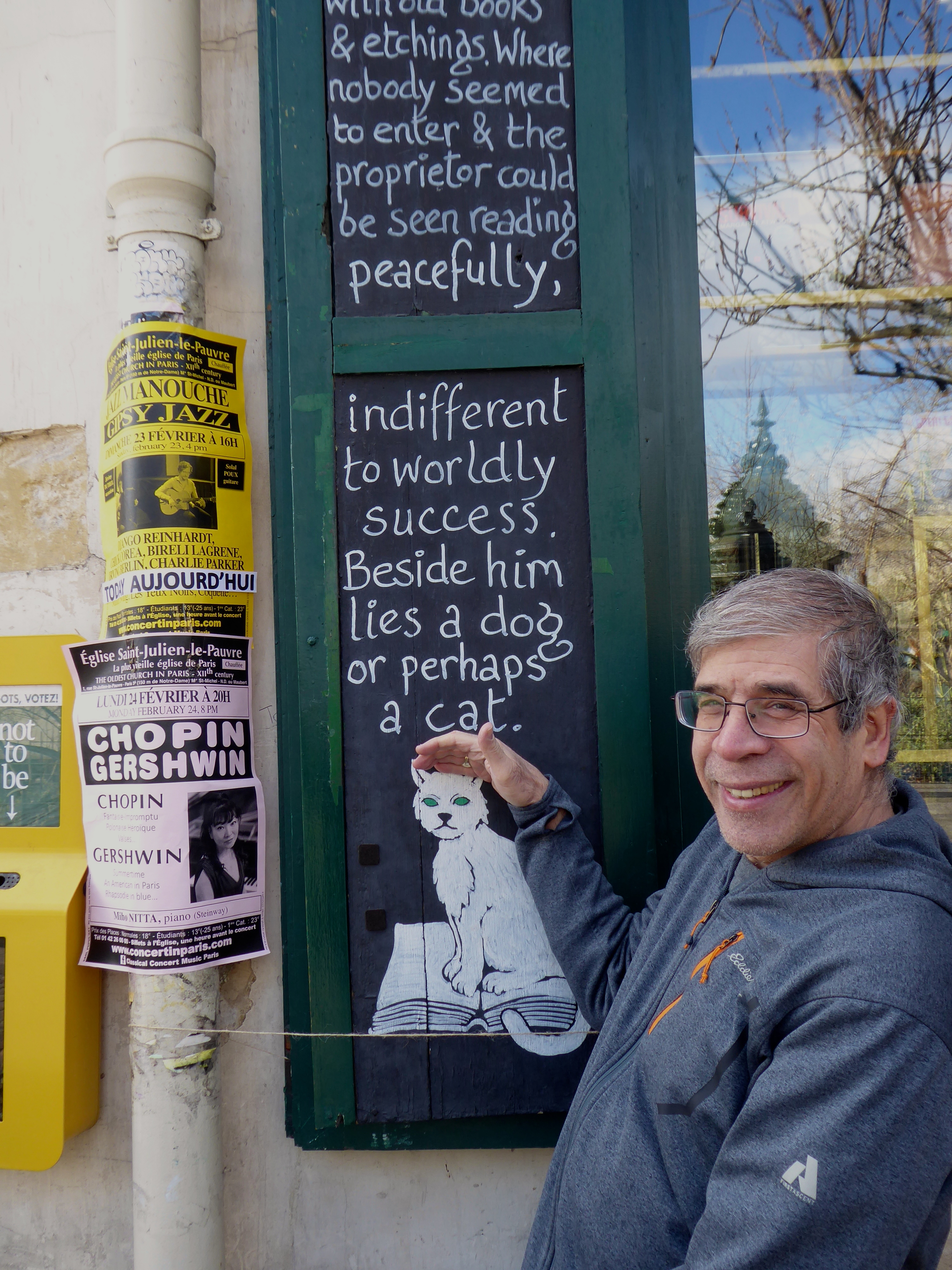 And here’s Agatha, who roams the store. I think she resented my interrupting her nap. 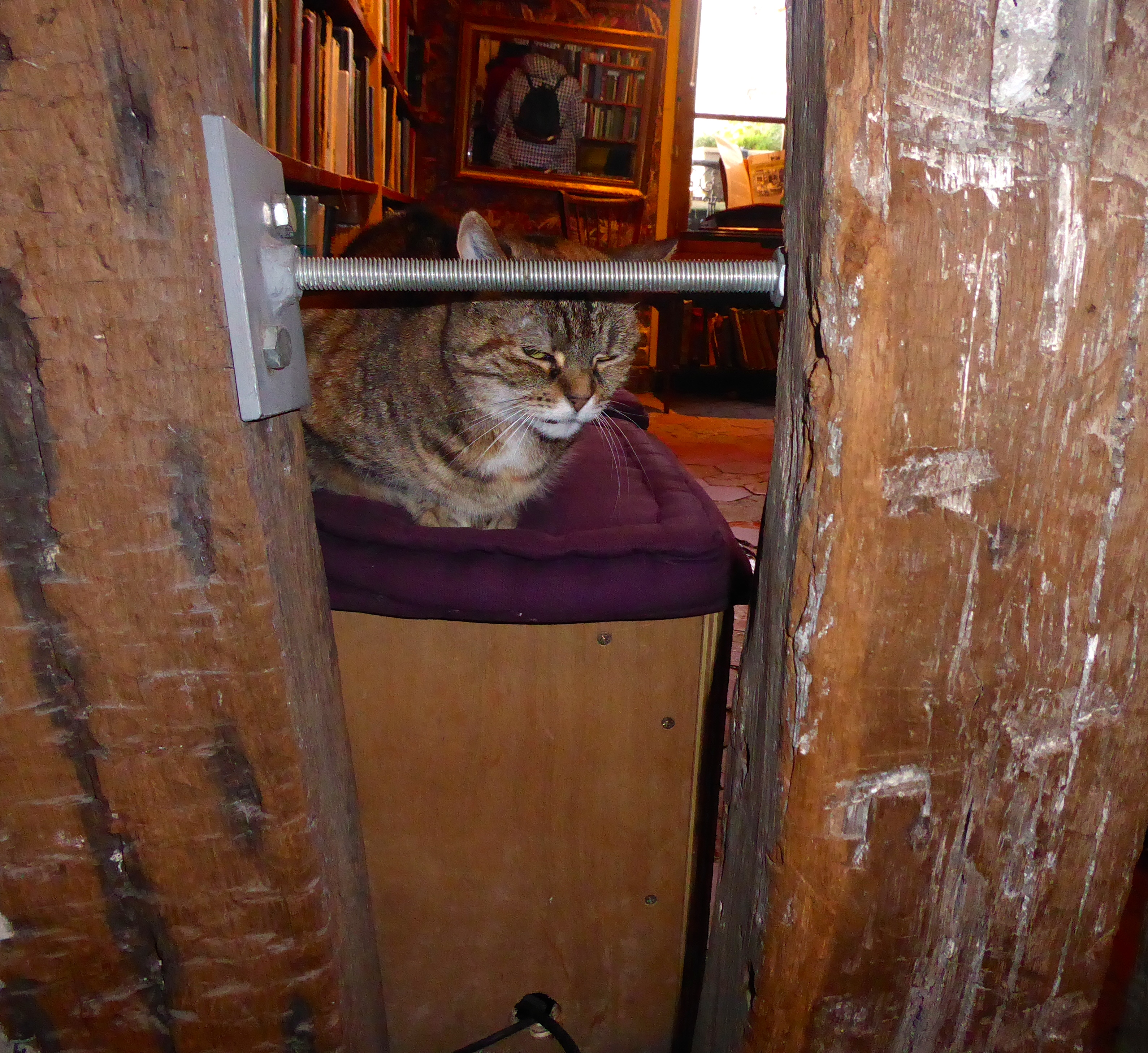 More cat stuff in stores nearby. This store sells nothing but items with black cats on them. The proprietor wouldn’t let me take pictures inside, the meanie! 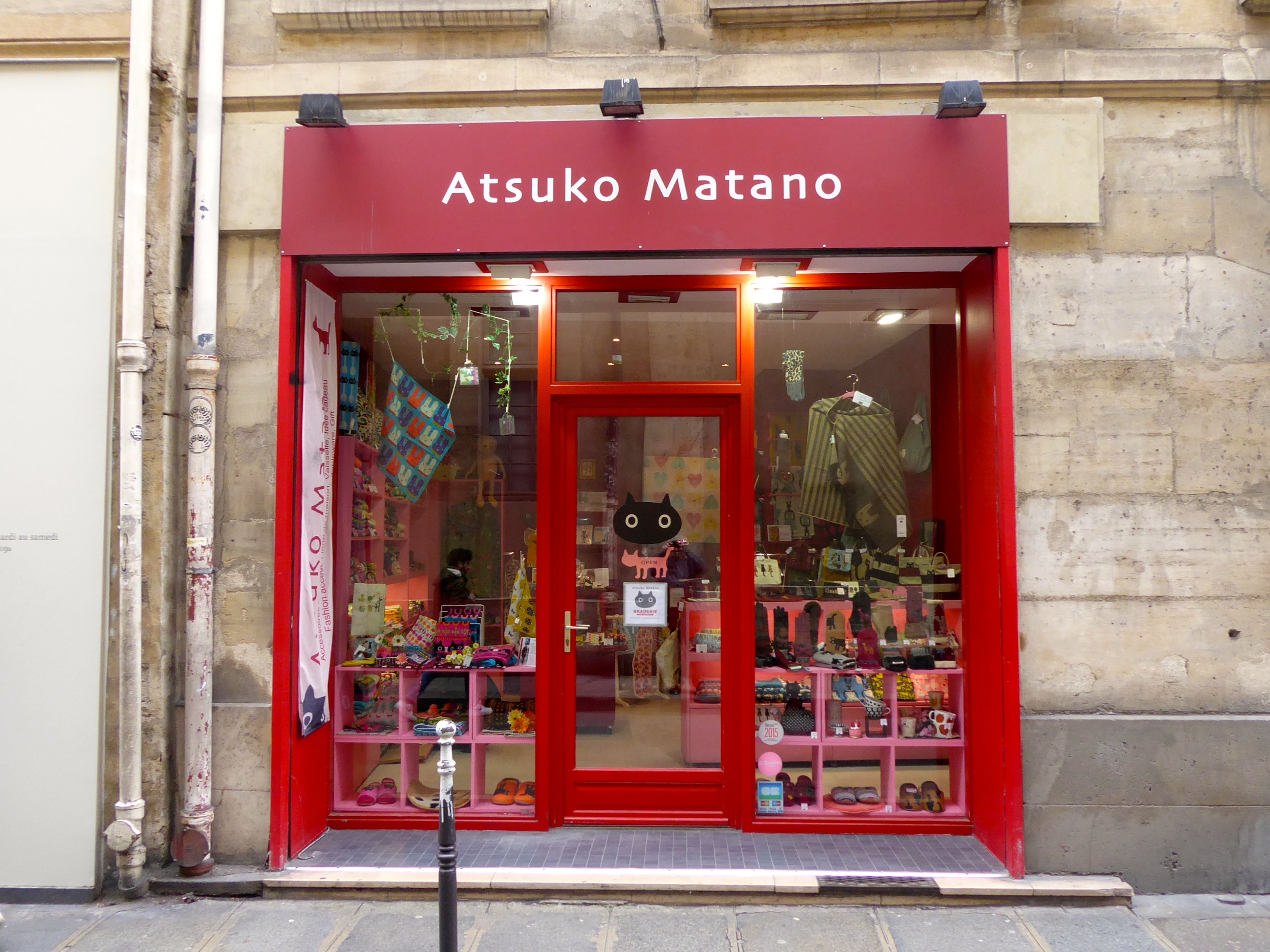 And right next door in the Marais, a fashion shop with a mannequin wearing a cat shawl (with gratis reflections): 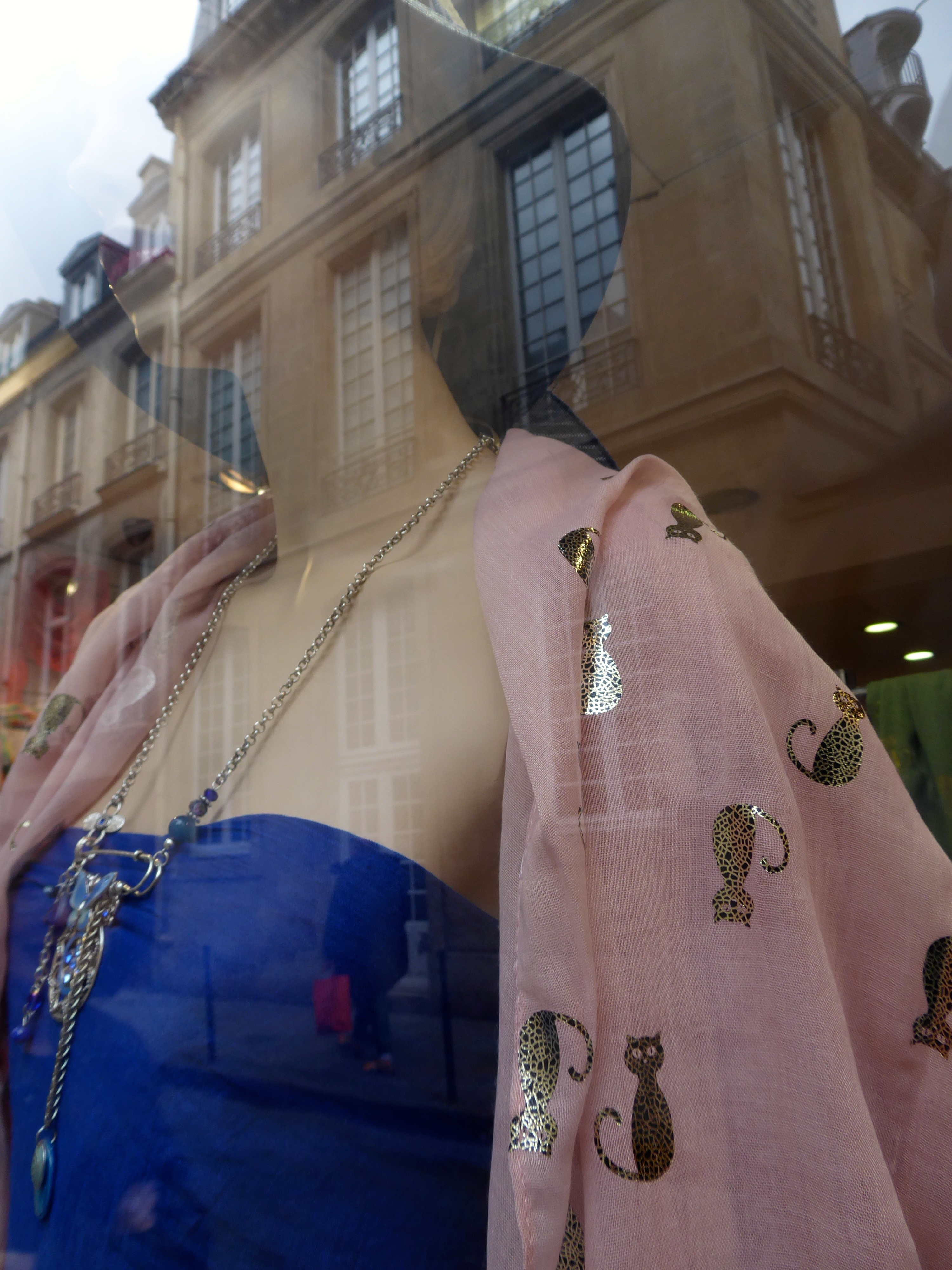 A bat skeleton in a shop that specializes in entomology and Afghan art (?). And of course the bat isn’t an insect. My reflection looms.

Look at those elongated finger bones! 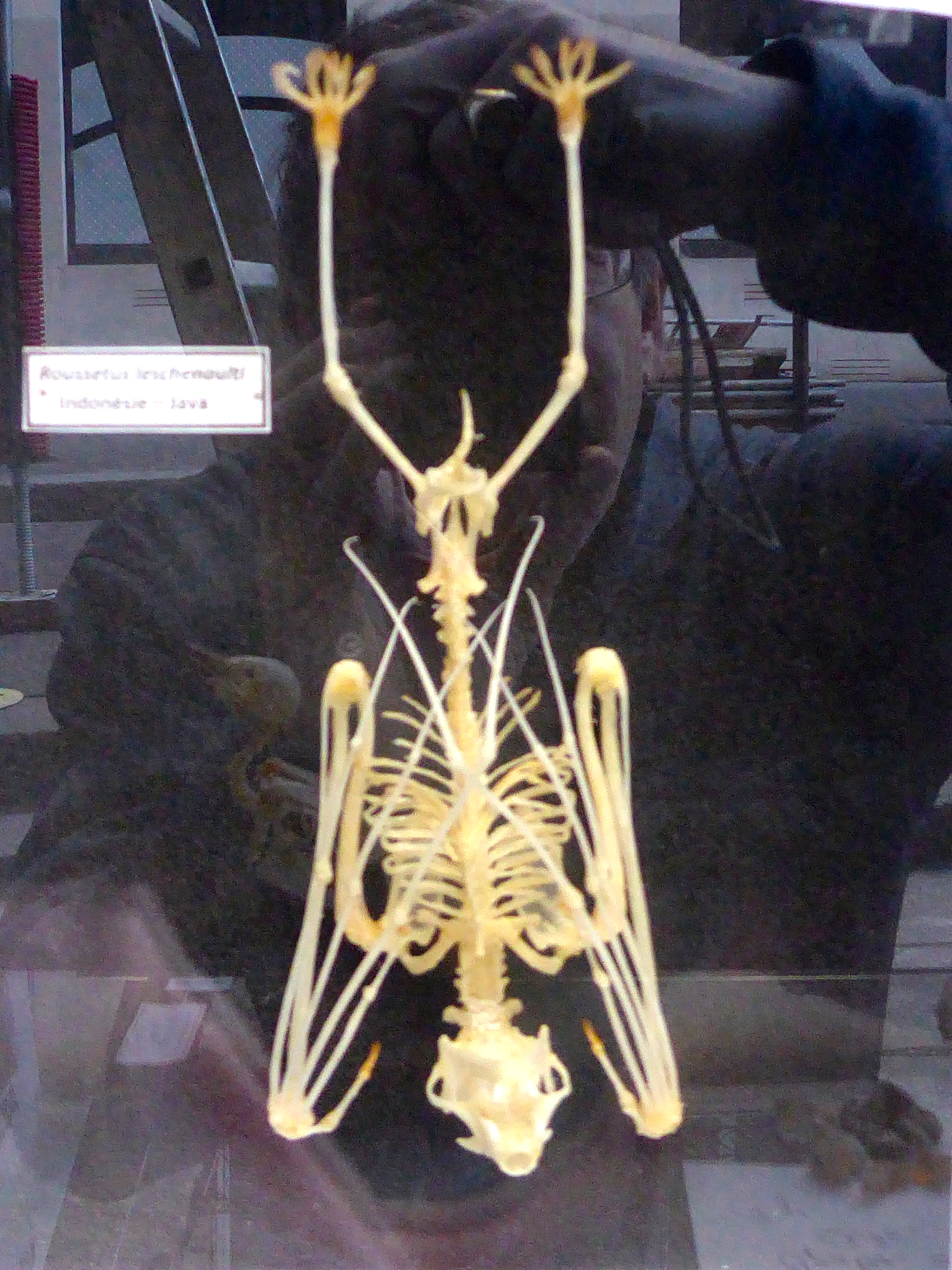 The goal for lunch: an old favorite of mine, the Auberge Pyrénées Cévennes, which never seems to get many tourists although it’s one of the best bistros in Paris—and not expensive. It’s near the Place Republique. The cassoulet is justly famous (and copious).

Entrées (served with a 45-ml pot of Beaujolais): pâté en croute and a salade frisée au lardons with croutons and a poached egg. The pate won fourth place in the world championship a few years ago: 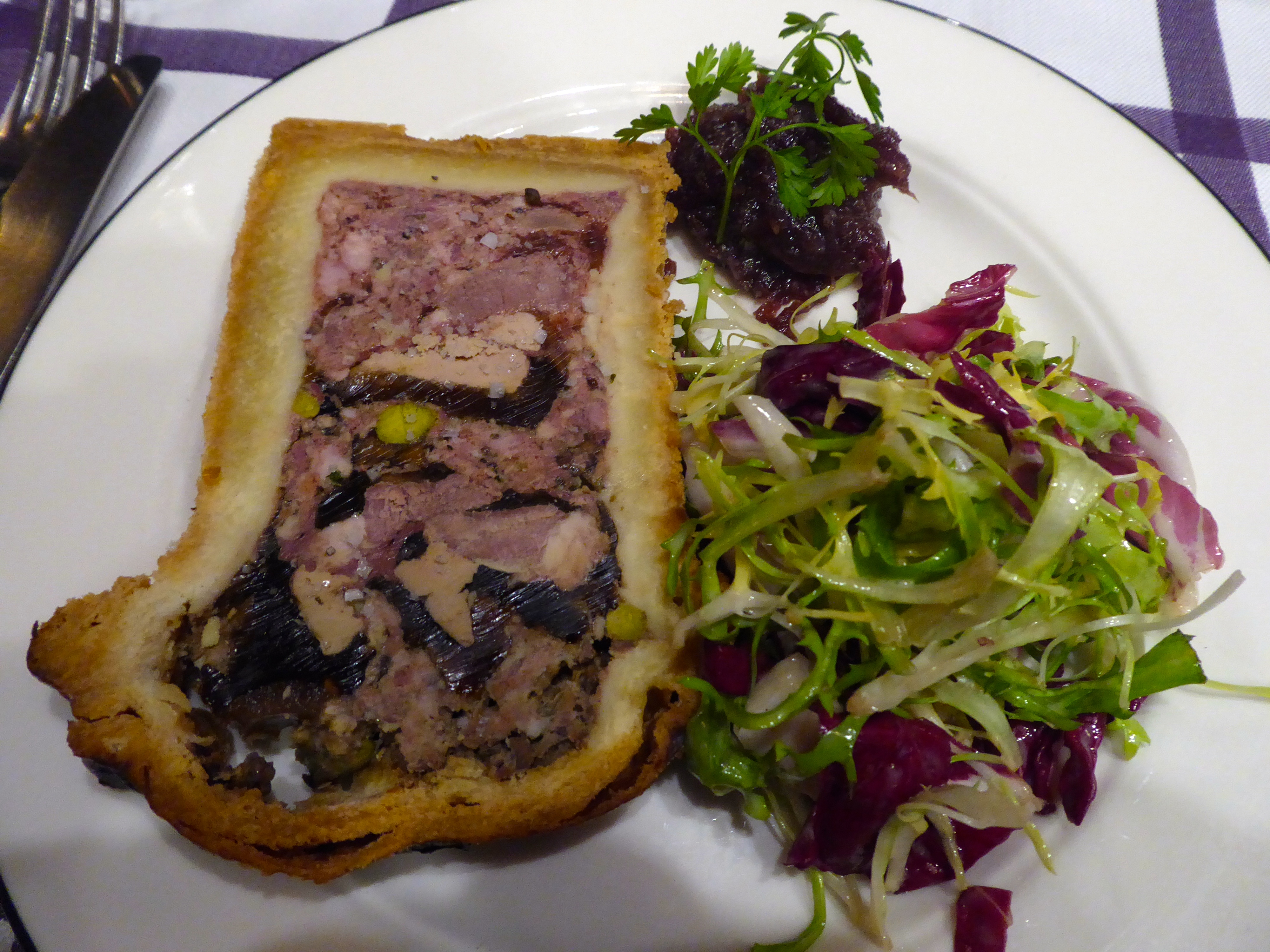 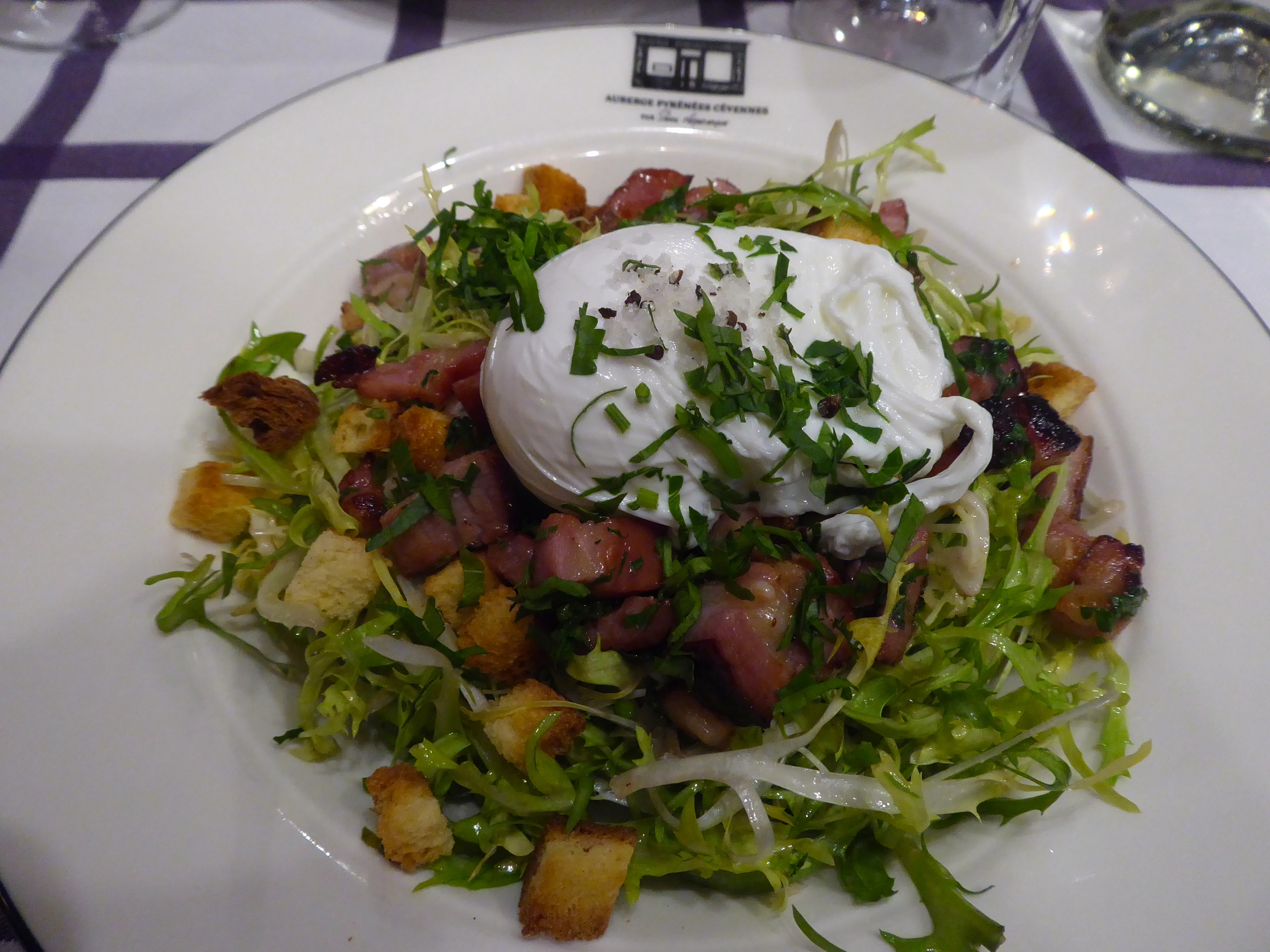 I couldn’t resist the cassoulet, even though I knew I couldn’t finish it all (it’s served in a huge copper pan. I finished the meats (sausage, pork belly, and duck confit), but the beans defeated me: too many of them:

The portion for one person, held by the waitress in two hands: 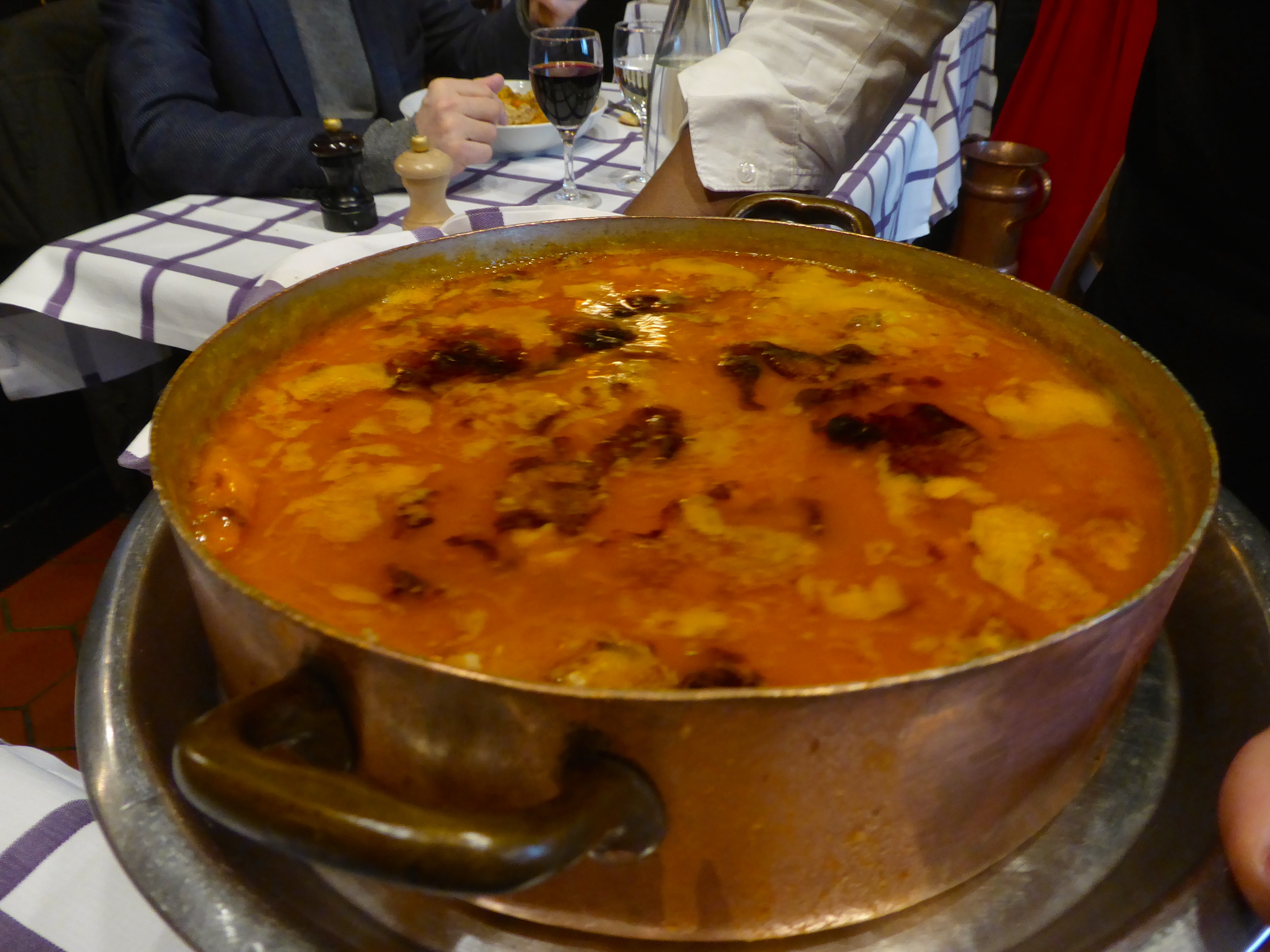 And dished out pour moi (there were lots of beans left in the pot). It was scrumptious (and of course filling): 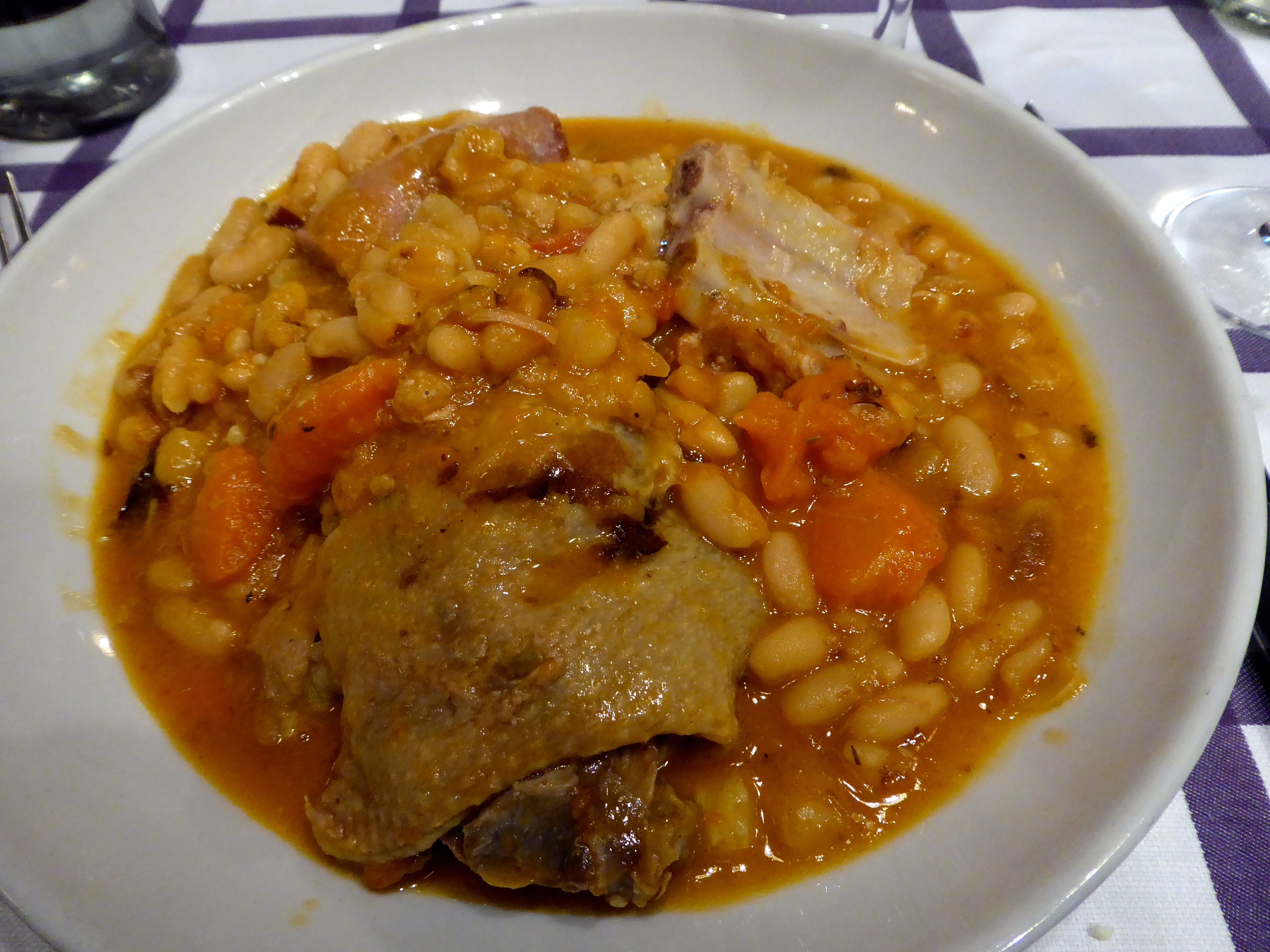 A table of six plumpish men—probably local businessmen meeting for lunch—shared a giant cassoulet. They sounded as if they were having a good time. 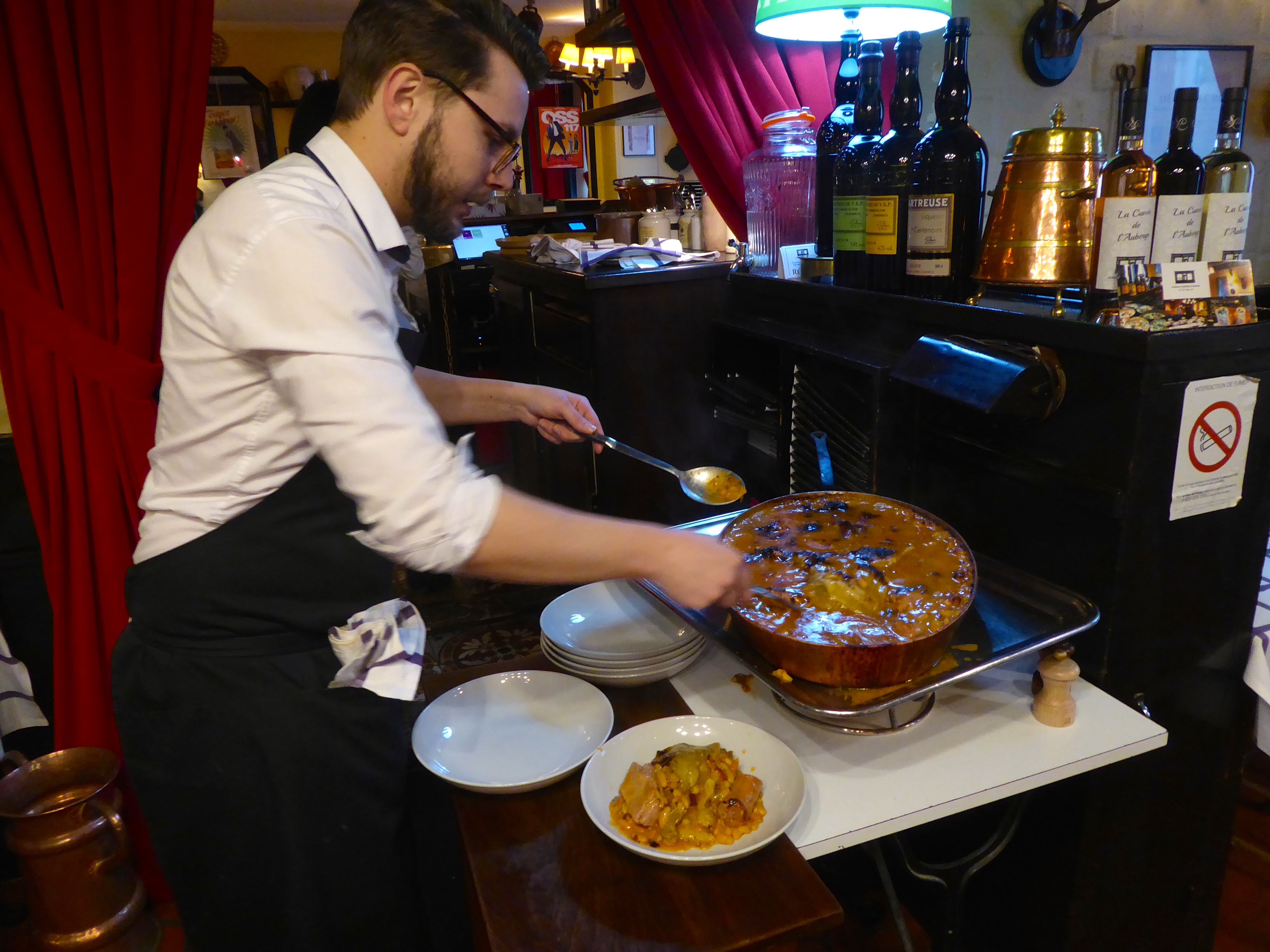 The other main course (plat) ordered by my dining buddy: sole served with a pot of buttery mashed potatoes. (Yes, they go heavy on the butter.) 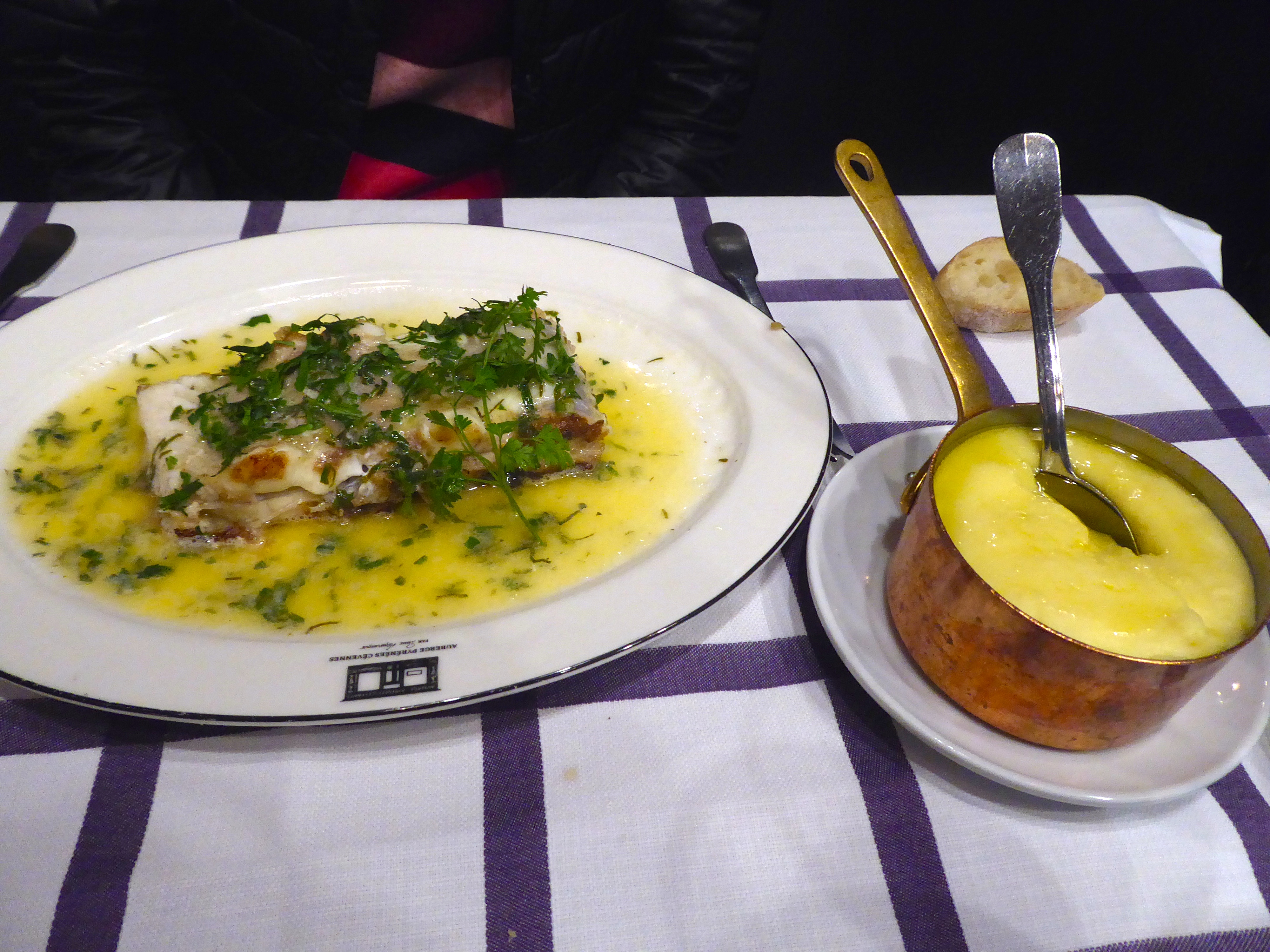 Dessert: a caramel soufflé (caramel at the bottom and drizzled over the top), which has to be ordered at the same time you order the entrée and plat. In France you almost invariably order the first two courses together, and then dessert after you’ve polished those off. Soufflés, though, take time.

I’m not sure how the word entrée (which in France is the “entry”, or starter course), got to mean “main course” in English.

The soufflé was fantastic. 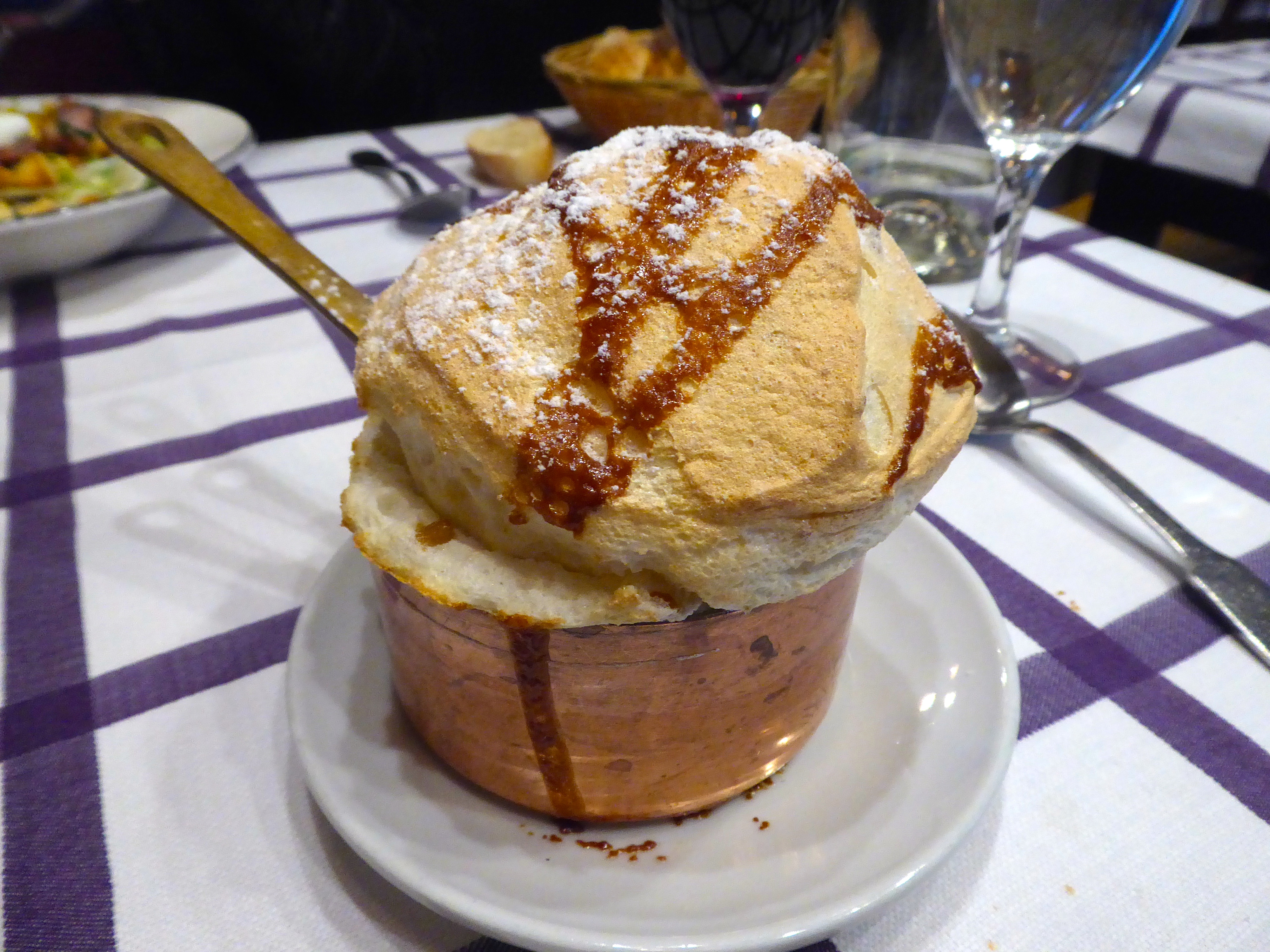 Now you will excuse me while I have a brief nap. . .