It’s Friday, February 14, 2020, and, of course Valentine’s Day, a Catholic and Anglican holiday, originally the Feast Day of Saint Valentine, reputed to have been a martyr. Here’s a meme that combines his religious  and secular significance: 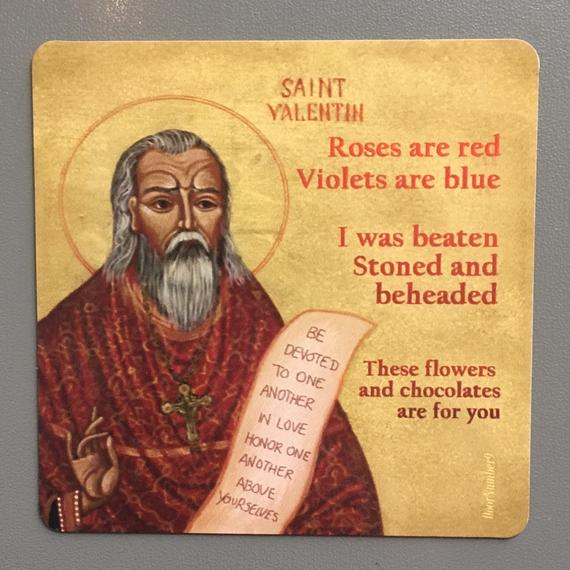 And one account of his connection with Valentine’s Day cards (from Wikipedia):

[Roman Emperor] Claudius took a liking to him until Valentinus tried to convince Claudius to embrace Christianity, whereupon Claudius refused and condemned Valentinus to death, commanding that Valentinus either renounce his faith or he would be beaten with clubs and beheaded. Valentinus refused and Claudius’ command was executed outside the Flaminian Gate February 14, 269. Saint Valentine is said to have ministered to the faithful amidst the persecution of Christians in the Roman Empire. An embellishment to this account states that before his execution, Saint Valentine wrote a note to [Roman judge] Asterius’s daughter signed “from your Valentine”, which is said to have “inspired today’s romantic missives”.

And there’s a special extraterrestrial Valentine’s Day Google Doodle today. Clicking on it (screenshot below) takes you to a bunch of information about the holiday. About the Doodle itself, C|Net reports:

Love is in the air, as it always is the closer we get to Valentine’s Day. But this year, it’s also in outer space, with our extraterrestrial friends.

Indeed, for Google, the day we celebrate love and romance is “out of this world,” and the tech giant is celebrating that theme this year with a Valentine’s Day Doodle that features a pair of adorable aliens exchanging celestial sweet nothings.

The site also explains how to send extraterrestrial Valentine GIFS to your sweetie, but that’s rather cheap-ass, isn’t it?  Anyway, here’s today’s Doodle:

Did you get a treat or present for your inamorata(o)? It’s not too late to buy some nice chocolates or goodies, which nearly everyone appreciates. In honor of the holiday, and as one suggestion, it’s National Cream-Filled Chocolates Day.

It’s also these holidays: Frederick Douglass Day, celebrating the great man’s birthday (or what is thought to be his birthday) in 1818; Library Lovers Day; and  Read to Your Child Day.

Finally, it’s bloody freezing in Chicago today: on my walk to work the temperature was -1° F (-18° C ), and with the wind it was -14° F (-25° C ). This is the first time this winter we’ve gone into negative Fahrenheit temperatures.

Lots of stuff happened on February 14; it includes:

The story of the “pale blue dot” photo is here, and reader Jon put together some notes:

For the thirtieth anniversary of the famous “Pale Blue Dot” image taken on February 14, 1990, by the Voyager 1 spacecraft, NASA used image processing software to remaster and “improve” the original. Carl Sagan, who was an imaging scientist on the mission, reportedly negotiated with NASA to have Voyager 1 turn around to take the photograph which was part of a series of 60 images that Voyager 1 snapped to produce what was called “Family Portrait of the Solar System.” Shortly after the images were made the cameras on Voyager were shut down to conserve power. Carl Sagan’s eponymous book was partly inspired by the spaceborne photograph and his reading from the book accompanied by the photograph on YouTube is still moving. [JAC: do click that last link and listen to Sagan. The guy was fricking eloquent!]

The original image (the dot is in a beam of sunlight): 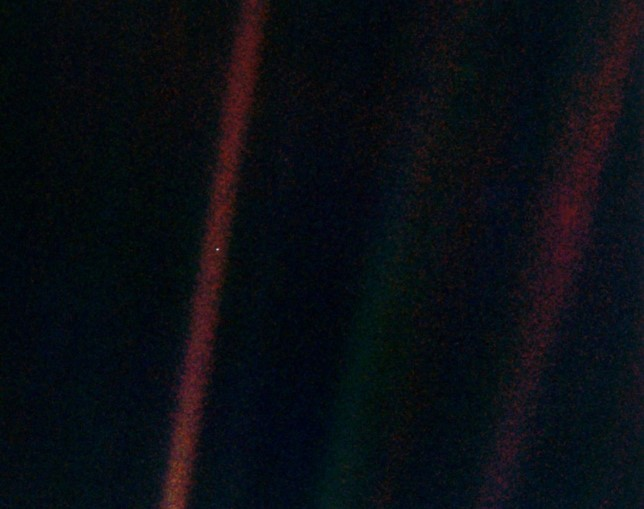 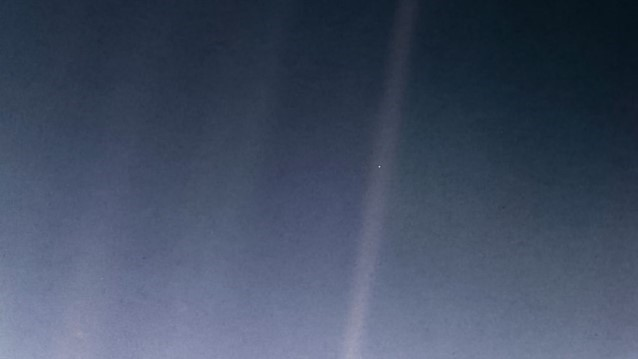 I listen to Gross along with the other NPR commentators, but never know what they look like. So I looked up Terry Gross, and here she is (of course they never look like you imagine they would): 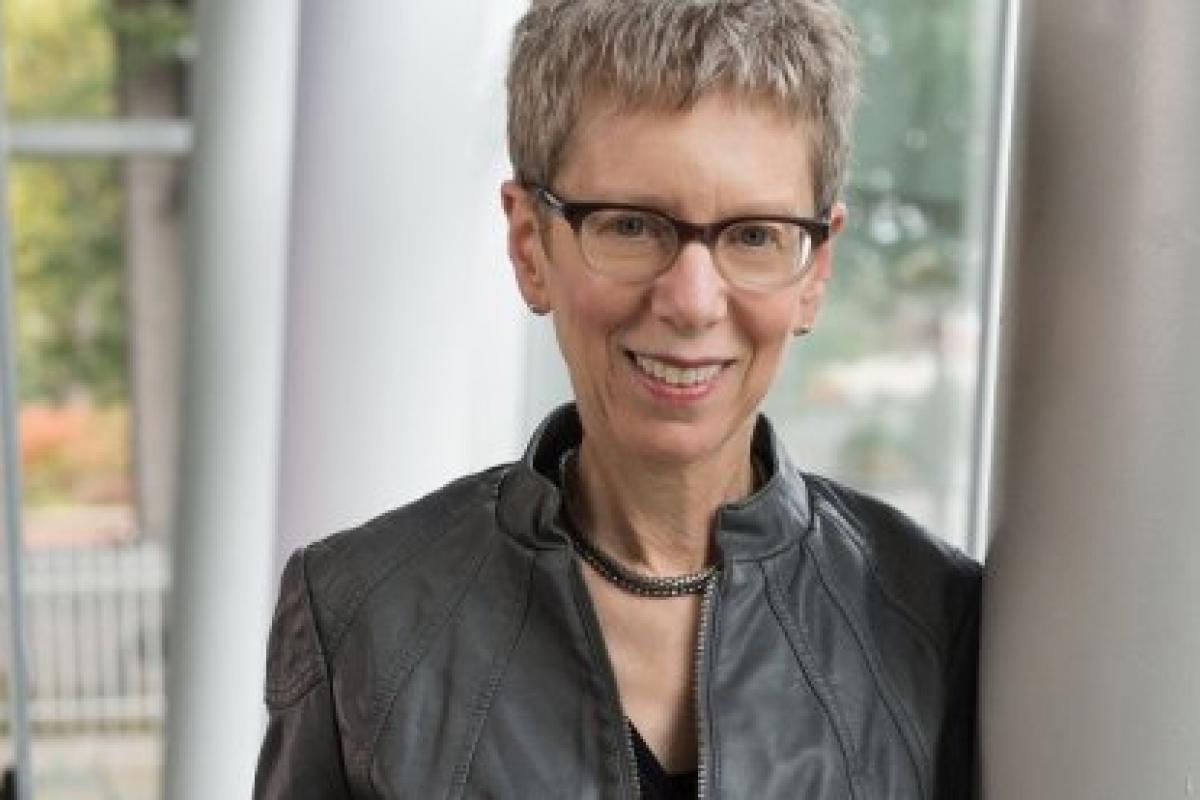 Those who had their finale on February 14 include:

Hili: I will take care of this rainbow plague.
A: But it didn’t do anything to you.
Hili: But it is provoking. 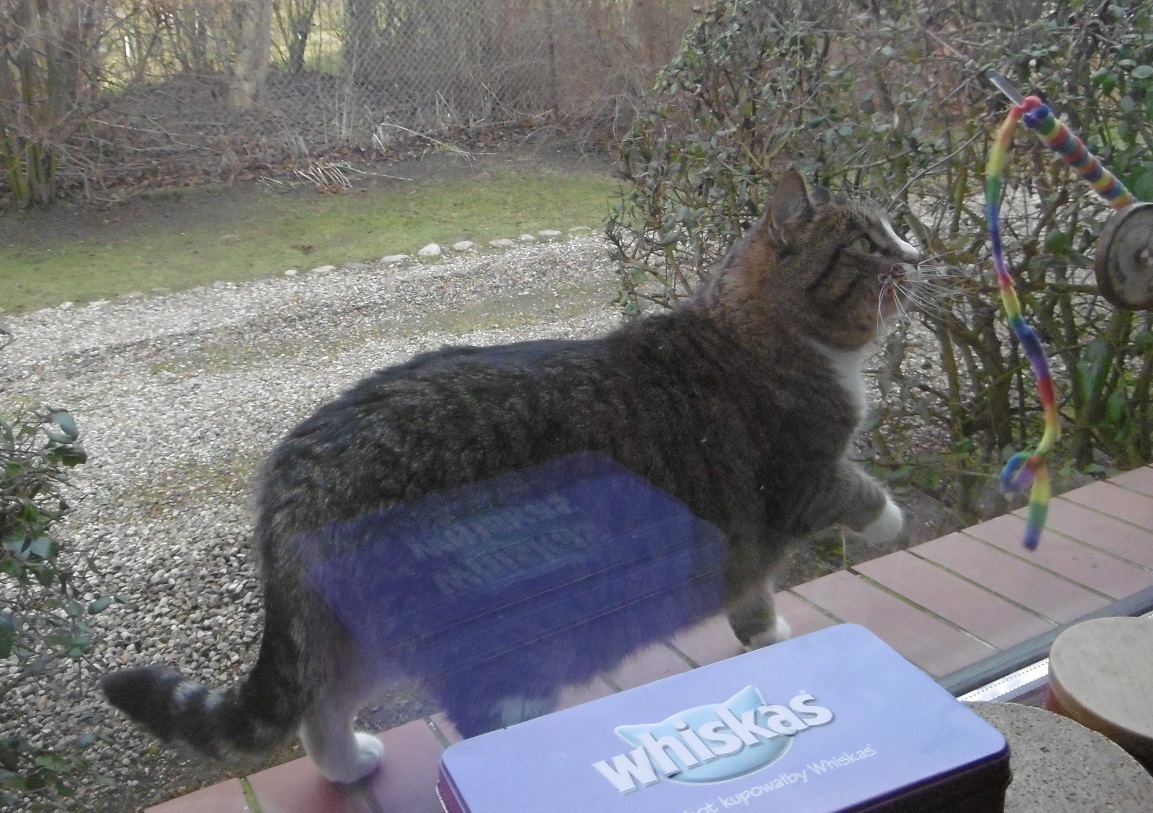 The Dover Public Library’s Facebook page is a real hoot; they have some wags for librarians there. Here’s one of their recent posts: 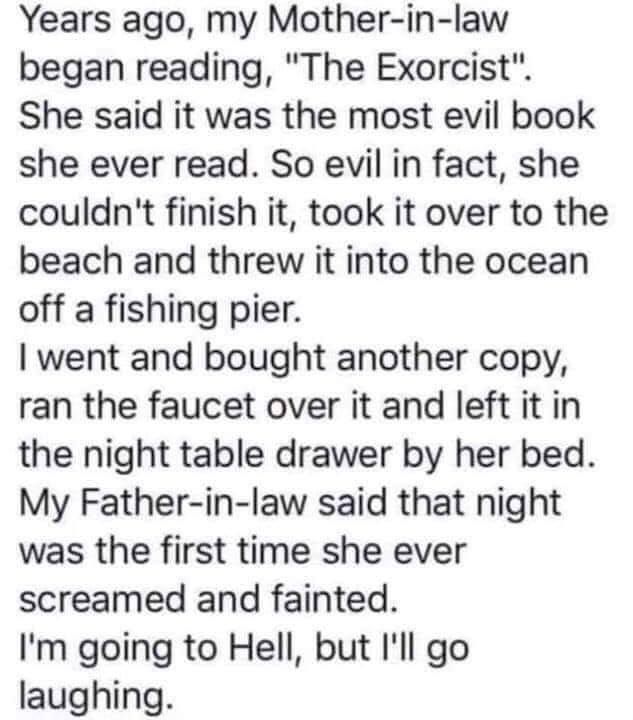 From Winnie: these fish have made a heart-shaped hole for Valentine’s Day: 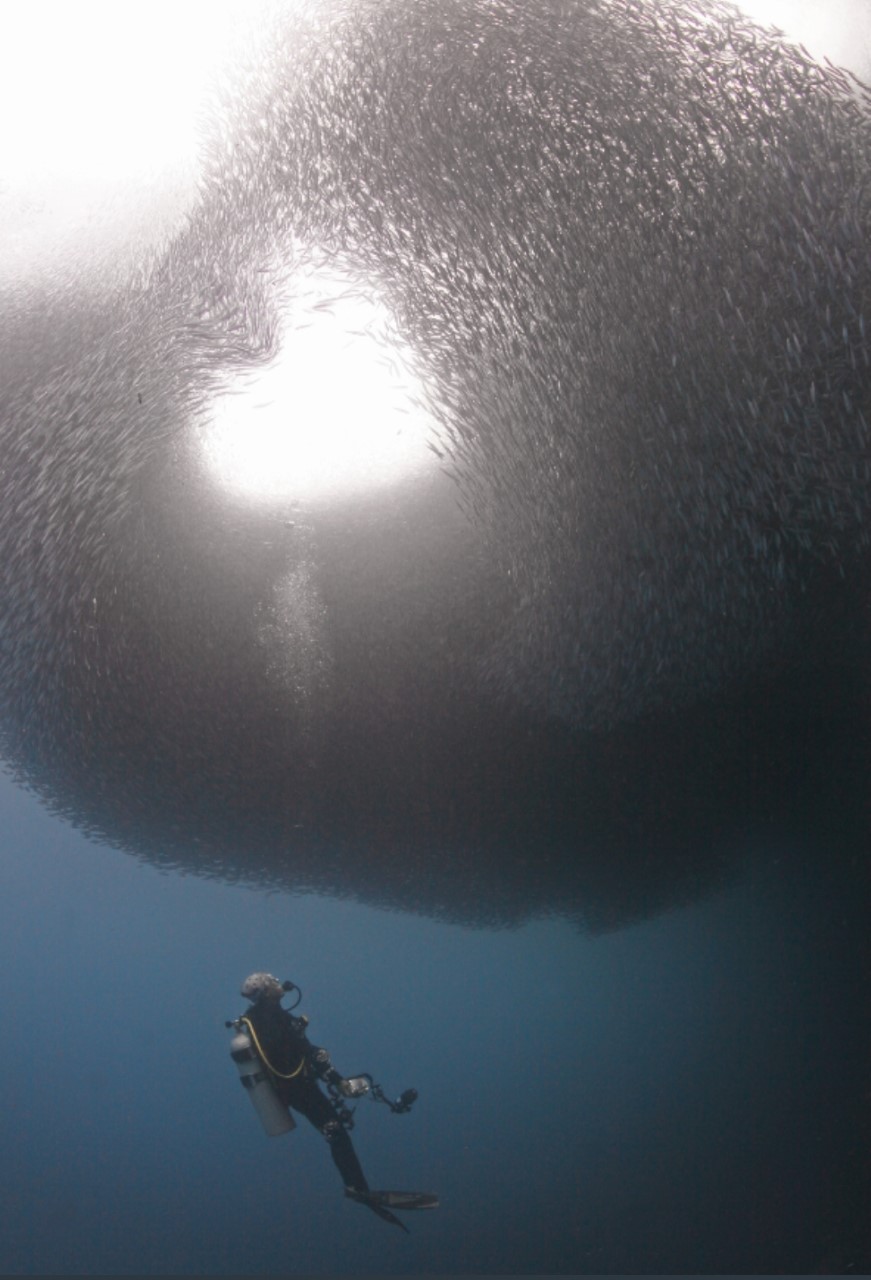 An anti-campaign poster sent in by Meriliee. I have no idea where it’s from or if it’s real, but I’d like to think it’s genuine: 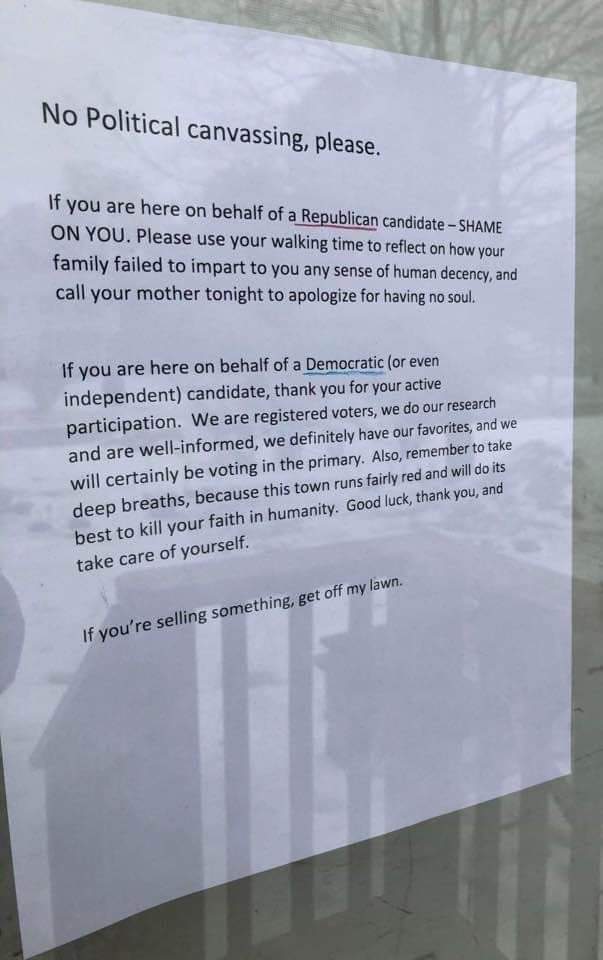 A photo from Laffn (note that the price went up): 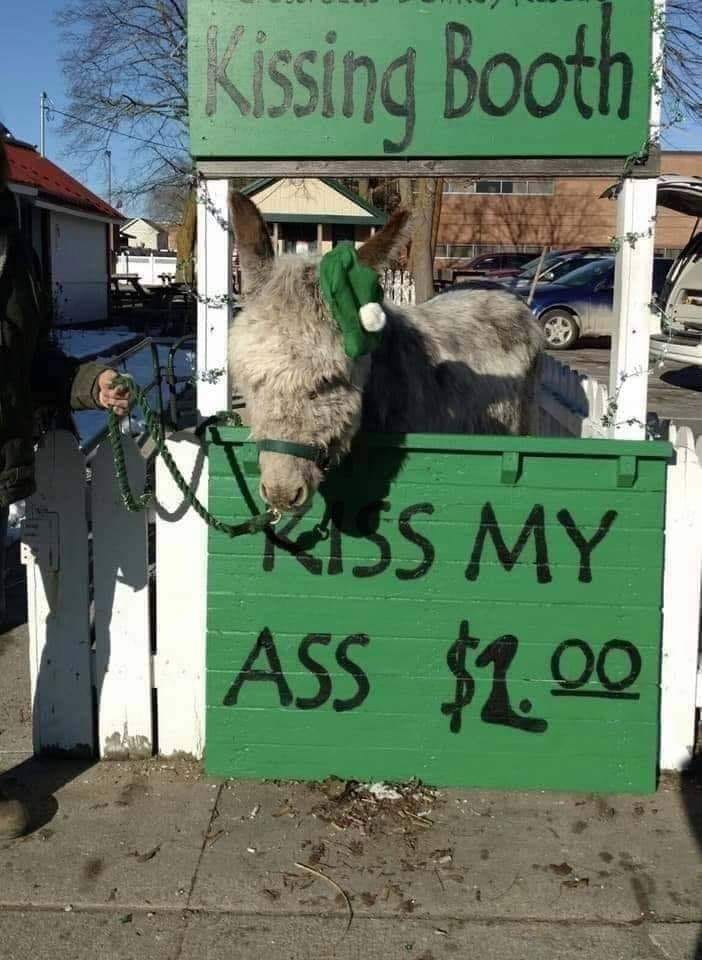 From Jesus of the Day, we have Messi the house puma in a sweater. And yes, this is a real photo: 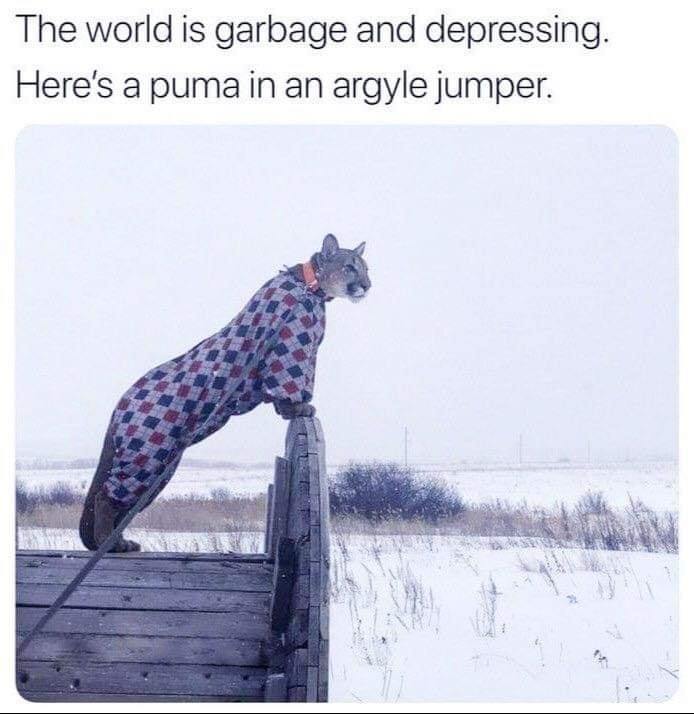 This is fricking adorable:

Baby elephant runs straight to his mum when he trips while chasing birds. The same tendency is found in humans too: Youngsters use their mothers or other attachment figures as a secure base for exploring the world, returning if they get upset or afraid. https://t.co/DfpyTDS7Jx pic.twitter.com/Z98RoDfwsj

A tweet from reader Mary. I can’t recall if I’ve put this up before, but I grow old. Anyway, enjoy “Dueling Cats”:

From Dom. This is funny but also sad. They should have left some nuts at the base of the feeder!

Mum was fed up of the squirrels stealing all the bird food so she greased the feeder! pic.twitter.com/k2eAyqSWvK

Tweets from Matthew. The first one, from the reliable Steve Stewart-Williams, is sad but true:

African army ants (“driver ants”) on the move, retweeted by Matthew. Do enlarge the video so you can see the guards and all the other castes:

The white things you can see being carried by the ants in the middle are the larvae, pupae and eggs (“brood”). The stationary ants on either side are guards. https://t.co/Tc7jrWug3Y

A good way to drive home the loss of species:

number of pixels = number of individuals left for each species. https://t.co/A4C70YQFmK

I retweeted this with an explanation (also provided by Dr. Cobb):

Giraffe-necked weevil, with its eyes only 1/5 of the way up its rostrum (snout). h/tL Matthew Cobb https://t.co/qCjP2JfWaL