The episode I’ll discuss this morning doesn’t really constitute deplatforming, since the speaker got to speak. It’s not disinvitation, either, as the speaker spoke and his invitation wasn’t rescinded. Nor is it “censorship” in the formal sense because nobody prevented the speaker from speaking. So let’s call it “disruption of a talk”, which is nearly as bad because it prevented people from hearing a speaker whose views contravened those of Left-wing students. Well, it’s not even that since the speaker in this case, Texas Solicitor General Kyle Hawkins, was supposed to be presenting both sides of the argument for whether DACA (the Deferred Action for Childhood Arrivals policy) was legal.

A wee bit of background: DACA offers those who came to the United States illegally as children a path to getting a work permit, though not citizenship. (The latter is the purview of the DREAM Act, which has never been passed.) DACA was established by President Obama in 2012, and its remit expanded two years later. Texas and 25 other states sued the government to block the expansion, a federal judge agreed, and an appeal to the Supreme Court gave a divided verdict (4-4) which meant the lower-court ruling stood.

That meant that although the expansion of DACA was blocked, and still is, the original DACA remains in force. Republicans oppose DACA in general, but I’m in favor of it as it’s a reasonable way to deal with those who came to the U.S. as minors and has had beneficial effects on the well-being of immigrants.

But the original and still-in-force DACA is still the subject of legal dispute, hinging on whether Obama had the executive power to create such a program that may really be the purview of Congress. One judge (in Texas) ruled in 2018 that the program is “probably illegal” but left it in place pending further litigation.

The upshot is that there’s a debate about the legality of DACA and whether a President has the power to institute it; and the lawsuits are ongoing.

This report, from the student newspaper The Stanford Daily, gives details about how Hawkins’s talk, which was supposed to give both sides of the issue, was disrupted by students (click on screenshot): 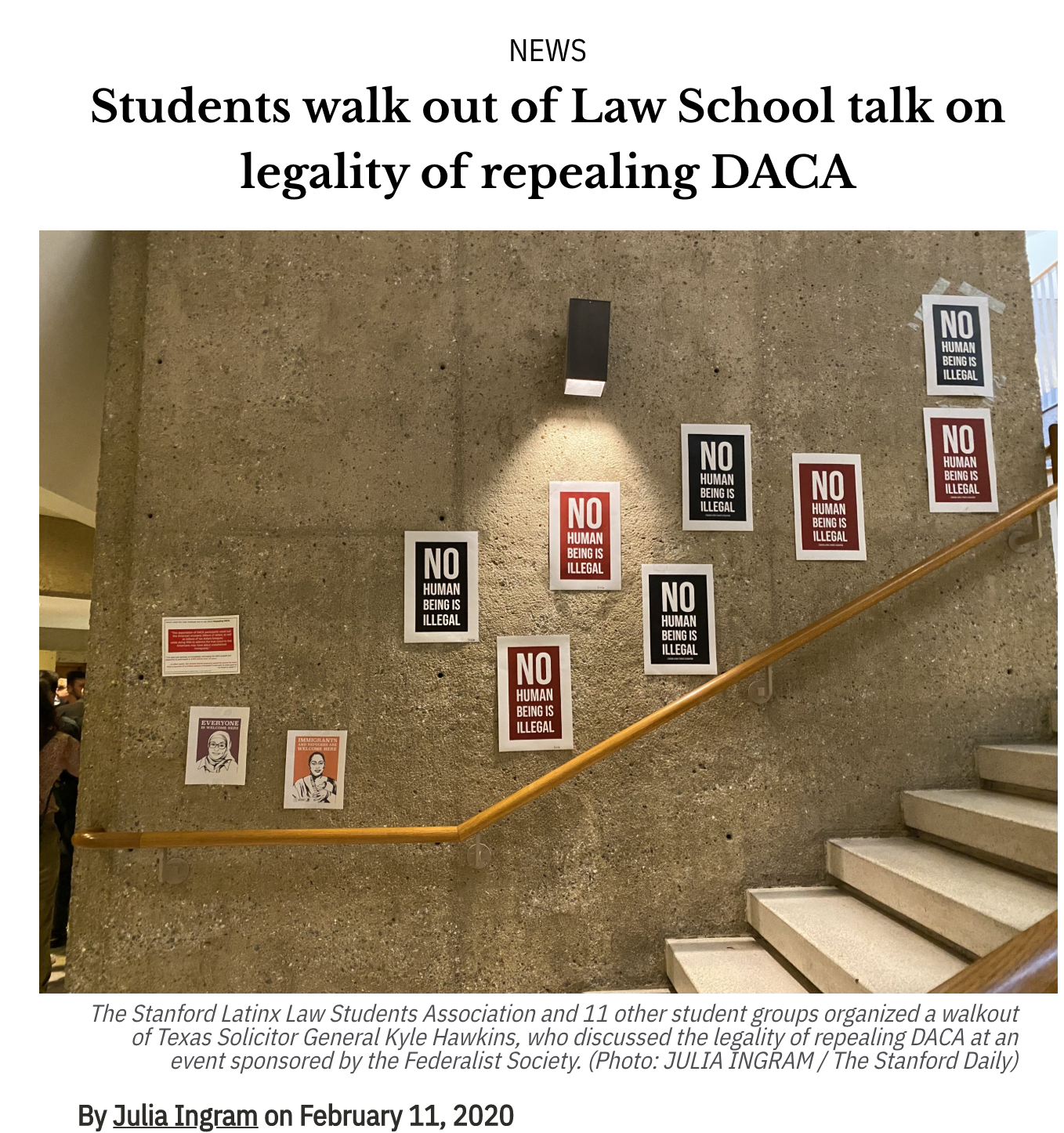 The nature of the disruption was twofold. First, a large number of students showed up, requiring the talk to be moved to a bigger room. They were also holding up posters, which I see as disruptive (it disrupts the speaker and blocks audience view.) When the audience was moved, and after Hawkins’s talk began, three-quarters of the students walked out, which also denied those who wanted to hear the talk, but couldn’t get in, a chance to listen. The walkout was organized by the Stanford Latinx Law Student organization in conjunction with 11 other student groups. (The walk-outs of course didn’t hear the talk either.)

It seems clear that (although Hawkins is probably opposed to DACA, he did give some arguments on both sides, presumably because they couldn’t find a professor to debate with him. From the paper:

Initially speaking before a packed room of students holding posters reading “No human being is illegal” or “Everyone is welcome here,” Hawkins prefaced his talk by saying that, since there was no planned rebuttal for the event, he would be arguing both sides.

But Hawkins’ track record aligns him with DACA’s legal opponents, and he spent the majority of his lecture explaining the substantive and procedural ways Trump could repeal DACA — emphasizing that he was making a purely legal argument.

“[Trump’s motion] did not say DACA is a bad policy,” he said. “It did not say that DACA was unworkable. … It just says that DACA is unlawful.”

Sidestepping questions of the value and impact of DACA, however, was exactly what those who walked out opposed.

“Purely legalistic discussions of DACA ignore the human element, which must be front and center,” SLLSA and the other groups wrote in a joint statement. “We cannot afford to disregard the presence and importance of DREAMers in all places, including here at SLS.”

But apparently Hawkins did argue both sides, though perhaps not with equal vehemence:

“DACA is unlawful for the same reason that DAPA was unlawful, according to the fifth circuit,” Hawkins said.

The arguments against DACA assert that former President Barack Obama did not have the power to institute the measure in the first place. DACA “confers on someone a status Congress would otherwise deny,” Hawkins said, including work authorization and lawful presence.

Pivoting to a pro-DACA legal argument, Hawkins said that the Immigration and Nationality Act (INA) grants the executive branch some leeway in enacting the U.S.’s body of immigration law.

“What the folks on the right need to grapple with is that the executive has discretion in enforcing the terms of the INA,” he said.

Well, DREAMers aren’t yet in existence, and DACA’s legality is still under debate, so one would think that, given the pending litigation, a discussion of its legality would be of interest. In other words, let the damn speaker talk!

But the students didn’t consider the issue even worth debating. A few excerpts show that view, including the claim above that the lecture was on an “intellectually cheap and morally affronting topic.” “Morally affronting topics” are, however, precisely those that are most crucial to debate! Here’s a student whining about how the talk was inappropriate:

Some who walked out of the event felt DACA’s legality isn’t even a question at all.

“It’s incredibly unfair that my fellow students have to face these extra burdens and then be reminded of them in school,” first-year law student Zoe Packman said. “We shouldn’t be discussing the legality of our student population. It’s not a valid question, there is no question there.”

Yes it is a valid question. Even if I hold, as I do, the position that DACA should be in place; I have no idea whether it’s legal. (The Congress could make it legal, but fat chance of that with a Republican Senate!) I have no sympathy for students like Packman who take it upon themselves to be The Deciders—to pronounce on what questions shouldn’t even be discussed at their school.

The Federalist Society, which sponsored the talk, said that they’d invited 11 professors to give a rebuttal to Hawkins’s talk, but none agreed. The protestors said that this was an inadequate “effort.” Well, for crying out loud, why didn’t they organize their own counter-discussion? (Apparently there was to be no Q&A after Hawkins’s talk.) I guess they can’t be arsed to do that kind of work. Instead, they just assert that debating the legality of DACA is not a valid question.

These are Stanford students, probably from both the Law School and the undergraduate school, and they are among the intellectual elite of America. Yet they’re extraordinarily censorious, and even afraid of hearing certain arguments. One would think that law students, at least, would appreciate the First Amendment. Yes, Stanford is a private school, but the arguments for freedom of speech still obtain. But they haven’t penetrated the crania of many Stanford students.