First, a happy Caturday to you from Larry, the Chief Mouser to the Cabinet Office in England:

The My Modern Met article below is two years old, but who could resist a title like this? (Click on screenshot to read.)

Cats have all sorts of unusual markings on their fur, from “two faces” to mind-bending optical illusions [JAC: check out the second link!] One of the latest felines to mesmerize us with their striking looks was recently spotted by Japanese Twitter user @TOKAITRICK_bot, who noticed an adorably weird cat face while out and about. The sweet creature is like two felines in one; it has a marking on its face that looks just like another cat!

The motif is front and center on the feline’s face. It runs right across the nose, and the marking bears an uncanny resemblance to a cat that’s crouched on top of its legs. To make the silhouette even more convincing, the shape includes pointed ears and a rounded hump. The undeniable cat-on-cat spot is not only unique, but very meta, too.

The pictures tell the tale: 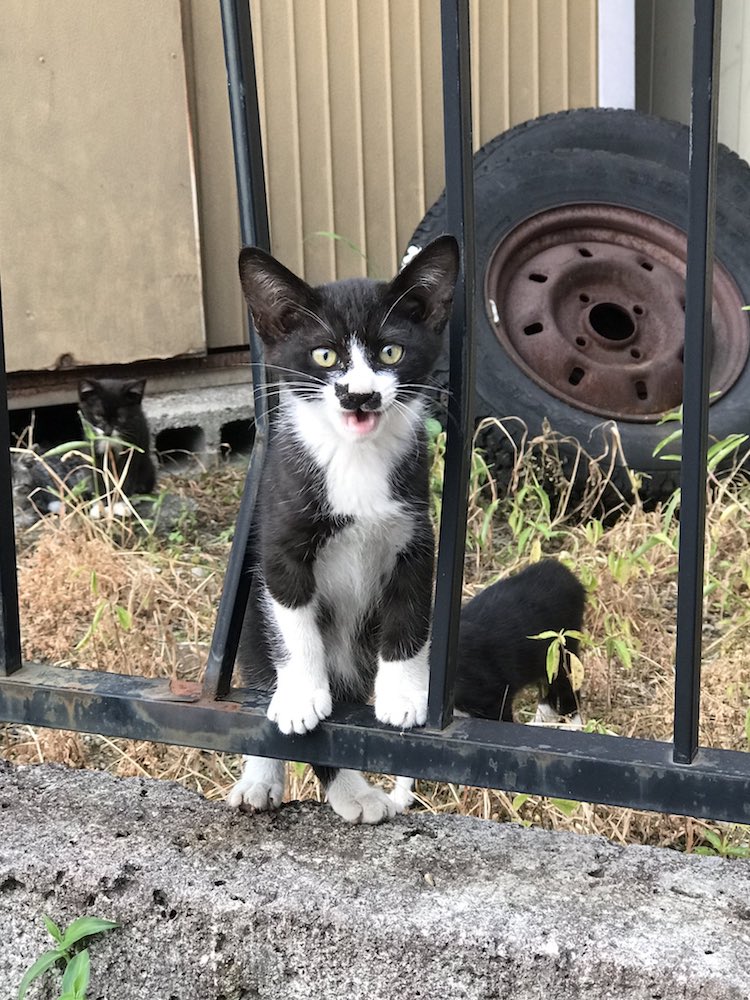 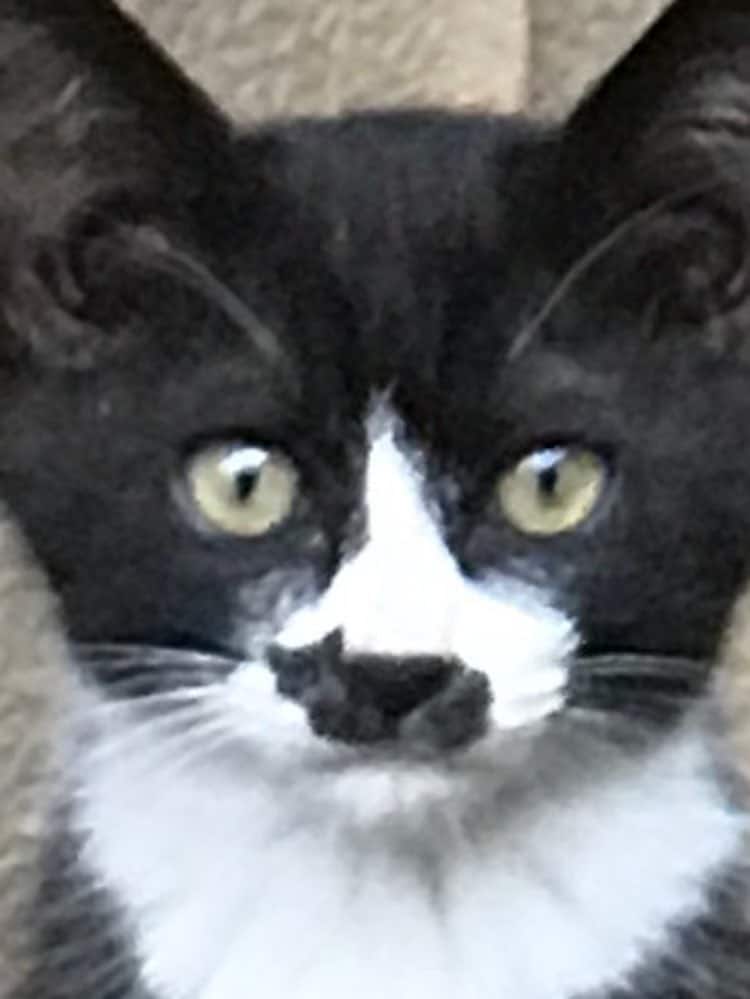 And a video in a tweet (Google translation: “Nose cat videos”)

From Bored Panda we hear of the World’s Best Bookshop in Nova Scotia, right outside Halifax (click on screenshot):

Otis & Clementine’s Books and Coffee is a bookstore just outside of Halifax in Nova Scotia, Canada, that took an innovative approach to convince people to rescue kittens. When you come in to browse for a good read or have a cup of Joe, you’ll spot something unusual. Unusually adorable, that is.

Kittens! And lots of them! Playing around and napping among the books. And probably reading Dr. Seuss’ The Cat in the Hat when no one’s looking. The best part is, you can adopt any of the cats in the bookstore and give them the forever home they deserve. Cats, coffee, and books. Can it get any better than that?

Not that I know of! Plus, the kittens on tap are about as cute as kittens can be. Here’s a few photos (all image credits that aren’t specified from Otis & Clementine’s Books & Coffee) 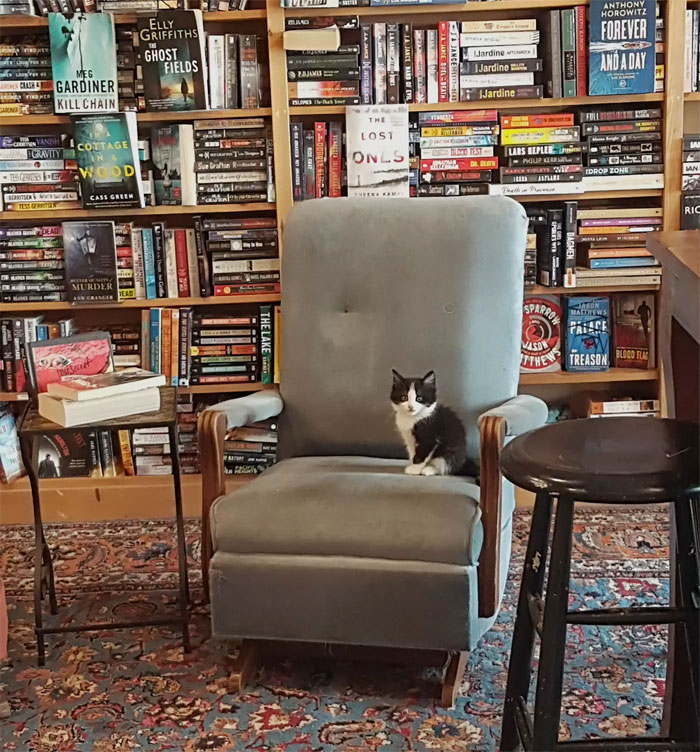 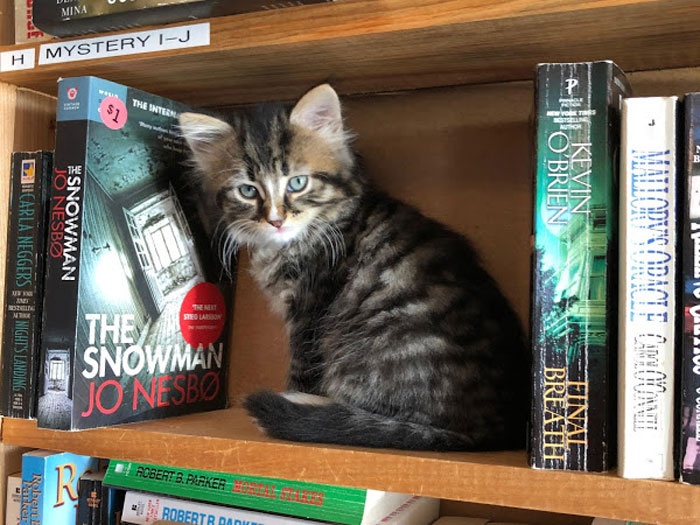 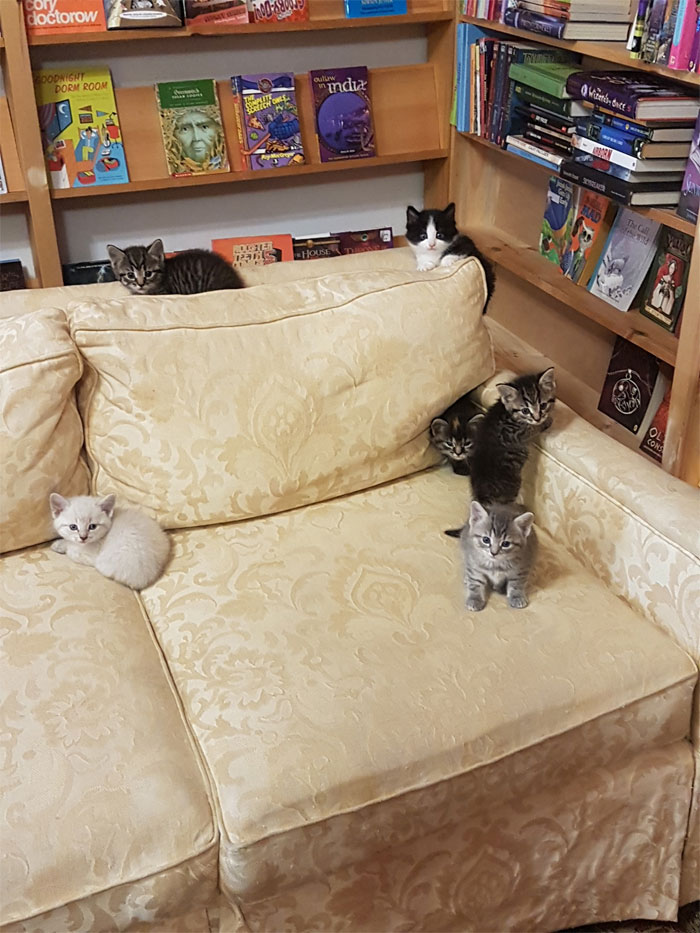 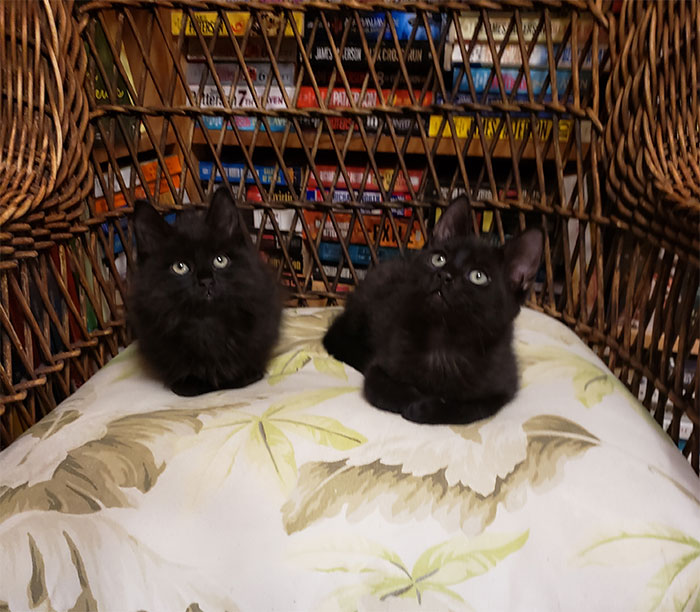 There are more photos and a lot more information at the site. The bookstore is a foster home working with South Paw Conservation, and the store has already helped rescue 30 moggies—with a 100% adoption rate!

If you live in Halifax, by all means get yourself to this bookstore (and send me a report, if possible)! And if you want a kitten, you know where to find one.

Here’s the story of a fat Polish street cat, Gacek, who is much beloved. (He lives in Szczecin, formerly known as Stettin.) Although the video’s in Polish, there’s an English translation below it.

Guy: How many people live in the town centre of Szczecin? Hundreds? Thousands? Tens of thousands? Probably. But how many cats? Probably also a lot, but they usually hide in stairwells or basements. Well, except for one small exception. That’s why we can call this cat the true Kitty King of Downtown.

Woman: This is Gacek, our feline star of Kaszubska Street. Gacek came to us about 7 years ago as a very thin kitty on tall legs. He came by, ate some, then ran off. Locals told me he hangs around in different places here in the city centre. One day he vanished for about 2 weeks, after which he returned, and it turned out someone had castrated him, and he just returned here to the place where he was getting food, so he kind of stayed here as our little street pal. Are we, the shop owners, taking care of the cat? Well when I’m at work I of course do take care of him. The locals take care of him too and passers-by bring us cat food. Little Gacek is a local celebrity. He gets pictures taken, he gets petted, there’s very positive emotions associated with Gacek. About 2 months ago at 1am a young lady and a man came here (we have security cameras set up) and set up a bunch of cages and tried to catch Gacek, but thanks to intervention by neighbours, they did not succeed. Gacek isn’t suited to live in a home because there was an attempt to find him a home. We had to come at 4am and on the way to the house he cried a lot. He is a free-living cat. His place is here. There are many cats around. I want to tell everyone not to close their basements because these cats need somewhere to go. Also I want to say if anyone wants to support us, bring us cat food into the store, but don’t leave it out for the cats because then there is a mess and the opinion forms that the cats are making a mess. The cats are not making a mess, people are making a mess not cleaning up after they feed the cats.

Guy: There will be no interview with Gacek because this kitty isn’t a huge talker, but it responds very positively to the residents of downtown. You can’t hide the fact that this cat is a real celebrity of this part of Szczecin, shown by the fact that people stop by and take pictures and also really want to pet him.

Old Lady: He is a real baby… everyone passes by and takes pictures, everyone likes him, they’ll pet him. I live here so I see it all the time.

Young woman: This is the second time I am seeing Little Gacek and he has captivated me! Incredible kitty! I saw how cleverly he crossed the road. A typical urban cat, finding himself here in the urban jungle. Really Szczecin’s visiting card. If the Gryphon no longer wanted to be the city’s emblem, then I’m sure Little Gacek would gladly take on the role.

Guy: We can really say that Gacek has become the visiting card of the city center. However I am sure that if you all looked around, then you would also find a cat in your neighbourhood who could become this kind of Feline Ambassador. This could be a good resolution for 2020: Pay more attention to the cats around us.

9 thoughts on “Caturday felid trifecta: Kitten with cat markings on its face; Nova Scotia bookstore offers kittens on the side; A fat Polish cat”